Seafood festivals in Florida go dormant in summer, so these spring festival mark your last chance to get out and enjoy authentic Florida seafood until next season.

This year’s roundup of April and May seafood festivals includes some firmly established mainstays, and if the seafood served is not enough for the palate, the entertainment at these fests is better than ever in 2018

Stone Crab Season ends on May 15

The Pompano Beach Seafood Festival, a mainstay on the festival circuit, has moved from the beach to a more accessible location at Pompano Beach’s Community Park on U.S. 1.

The new location is adjacent to the city’s amphitheater, an outstanding venue for entertainment, and this year, organizers promise plenty of good sounds, including the Guess Who, Foghat, Inner Circle, Zach Deputy, local favorites Two-Can Blue and 19 other musical acts performing on three stages.

Entertainment is included in the price of admission, which is $15 for Friday , $20 Saturday, $15 Sunday, and $35 for a weekend pass. Proceeds benefit local charities, school and civic groups.

This is the third year for this Treasure Coast festival.

Besides arts and crafts and an abundance of seafood, there will be entertainment throughout the festival. This year’s headliners include rock band Tonic on Friday, country rap duo The Lacs on Saturday, and singer-songwriter Everlast on Sunday.

The Kid Zone is being expanded to include carnival rides.

No, this is not Louisana, but it’s close.

You can also participate in a Crawfish Eating Contest in three divisons: kids, adult or the seriously serious CrawDADDY division. Kids entry is free, adult entry is $5 and CrawDADDY entry is $10. (Registration starts 30 minutes prior to each competition.)

This is the second year for this event, one of several similar festivals produced around the state by Paragon Festivals of Sarasota.

This is the 56th annual shrimp festival in one of Florida’s most productive shrimp regions, so you know they’ve got it figured out. Pirate Parade, exhibits, arts and crafts, antiques, games, contests, seafood and live music along the Amelia River in downtown Fernandina Beach.

Free admission for all events.

The long weekend kicks off Thursday, May 2, with the Pirate Parade through downtown, but the full festival doesn’t get into swing until Friday night with the of Miss Shrimp Festival Scholarship Pageant, followed by the Pirate Parade Awards and entertainment. The evening wraps up with fireworks at 9:30.

On Saturday at 8 a.m., join the annual Shrimp Festival 5K Run/Walk at the beach. The festival grounds open at 9:30 a.m. with continuous entertainment throughout the day and evening. Featured performers at 3:30 p.m., Firefall and Poco.

The festival opens at 11 a.m. Sunday with annual Blessing of the Fleet set for 1:30 p.m. and musical entertainment until 5 p.m. 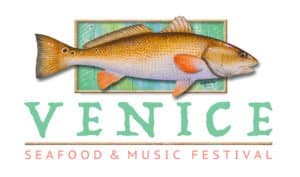 This is the inaugural year for the Venice Seafood & Music Festival, to be held in Centennial Park from 11 a.m. until 8 p.m. both days.

Local restaurants are slated to serve up the seafood, including one of my favorites, the Crow’s Nest, which serves oysters from around the world at its restaurant overlooking the Intracoastal Waterway at the Venice Inlet.

Musical entertainment, which begins at 12:30 p.m. each day, will include R&B, jazz, rock, big band and Caribbean.

Where: Downtown Venice in front of City Hall.

For more information, visit their web site at ParagonArtEvents.com

No, this is not Louisana, but it’s close.

You can also participate in a Crawfish Eating Contest in three divisons: kids, adult or the seriously serious CrawDADDY division. Kids entry is free, adult entry is $5 and CrawDADDY entry is $10. (Registration starts 30 minutes prior to each competition.) 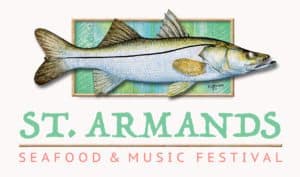 In its second year, the St. Armands Seafood Festival will be held at St. Armands Circle Park from 11 a.m. until 8 p.m. on both Saturday, May 26, and Sunday, May 27.

Where: St. Armands Circle is on St. Armands Key, between Sarasota and Lido Key. For more information, go to seafoodfestivals.com

For a complete list of this year’s seafood festivals, visit our 2019 Seafood Festival Calendar.