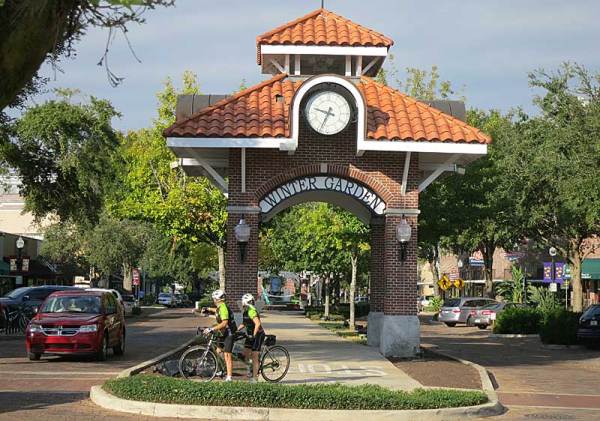 Thirty years ago, Winter Garden, a city 15 miles west of Orlando, had a faded, decaying downtown. Businesses had moved out; people and vitality had followed.

But then, area leaders made two things happen: 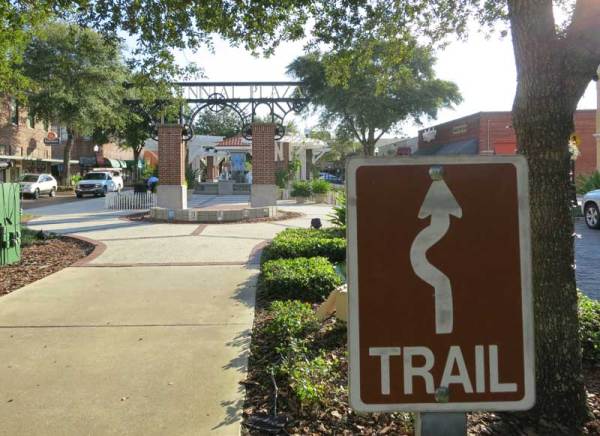 Today downtown Winter Garden is a quaint old-fashioned neighborhood full of restaurants, museums, fountains, bike shops, boutiques and all sorts of people on bicycles and foot.

A hotel at the center of Main Street, the Historic Edgewater Hotel, has been refurbished into a charming and affordable bed-and-breakfast inn that is particularly popular with bicyclists who flock to this popular rail trail. 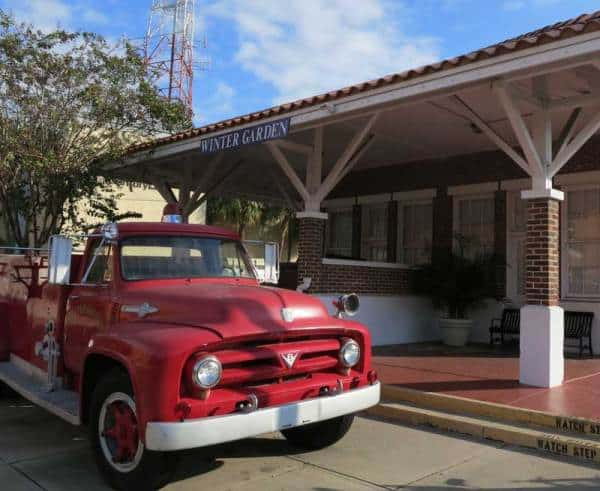 Things to do in Winter Garden: The Winter Garden Heritage Museum, a free downtown museum, has an old fire truck, a tractor and caboose and exhibits on citrus and Lake Apopka. (Photo: Bonnie Gross)

Winter Garden now makes a perfect weekend getaway for bicyclists and lovers of Old Florida. It is being touted as the best evidence around why Florida needs to build more bike trails and connect the ones already built. 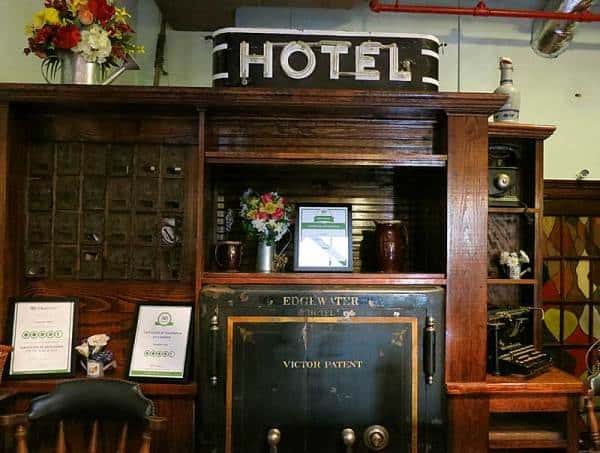 Personally, I want everyone to go to Winter Garden to see what magic can happen when you combine bike trails with historic preservation. (Here’s a separate piece just on the highly recommended West Orange Trail.)

While it’s gradually being swallowed by sprawling metro Orlando, Winter Garden is a historic town established in the 1890s with a heritage of citrus groves and railroads.

The Historic Edgewater Hotel was built in 1924 to bring northern tourists to Winter Garden to fish in nearby Lake Apopka, which teemed with trophy-sized bass. In addition to the hotel, there were 20 fish camps on the lake in its glory days.

Lake Apopka is Florida’s third largest lake and had the unhappy distinction of becoming its most polluted in the 20th century. Years of abuse peaked in 1980 when a pesticide manufacturer nearby spilled toxic chemicals into the water, killing thousands of birds, alligators and other wildlife. (The spot became a Super-fund clean-up site.)

Today, clean-up efforts are working and Lake Apopka is making the same kind of comeback as Winter Garden.  We picnicked along the city’s Tanner Park on Lake Apopka’s shore and saw osprey, heron, alligators and hawks all thriving around the blue waters of a lake no long a sludgy sick green. 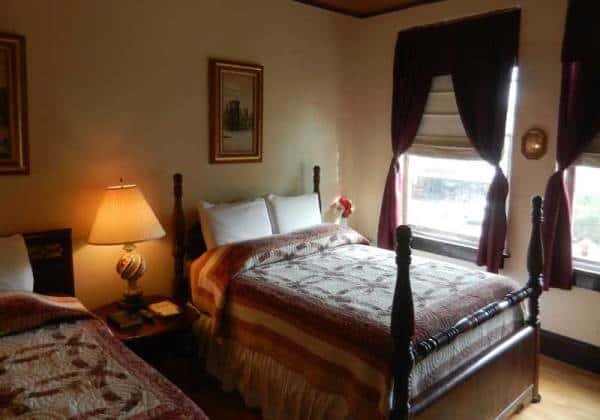 The rooms in the Historic Edgewater Hotel are decorated to evoke the era of its founding. (Photo: Bonnie Gross)

Things to do in Winter Garden: Staying at the Historic Edgewater Hotel

If you’re staying in a town with history, it’s always great to stay in a place that immerses you in that history.

For us, the Edgewater was a perfect fit. Built in 1927, it’s been through a lot, going from a fish camp to housing WWII troops in the 40s to providing rooms for workers constructing Walt Disney World around 1970.

By the time Winter Garden was bouncing back, the Edgewater was a wreck and needed loving restoration if it was to be saved. Happily, that’s what happened.

Today, the hotel’s first floor still has the original picturesque front desk, fireplace and skylight-lit lobby. The hotel’s guest rooms are on the second floor, where an inviting lobby filled with antiques also serves as the breakfast room. When you check in, a staff person takes you to the second floor on the 1926 hand-operated elevator. 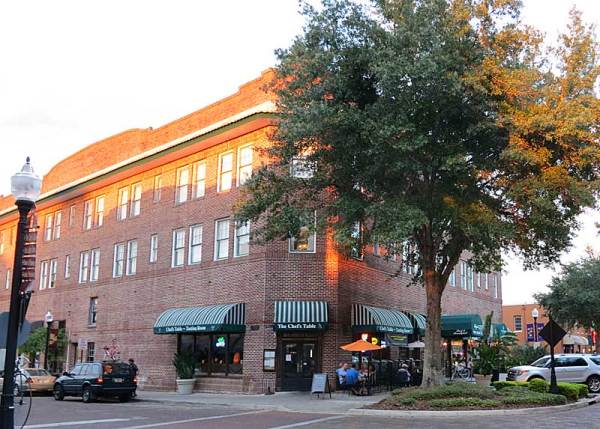 Rooms each have a bathroom and are decorated to the style of 1920s and 1930s with quilts and antiques.

Rates are reasonable, starting at $104 a night. Given the excellent breakfast that is included – eggs to order, bacon or sausage, pancakes or French toast, fresh fruit, juice and coffee — this is a good deal.  Many rooms were originally designed for families, with two bedrooms connecting through a bathroom, and so there are a number of two-bedrooms suites priced at $140 to $160.

As in its heyday, the hotel’s first floor facing onto the main street is all about commerce.  It houses five businesses: the highly rated Thai Blossom restaurant, retro- looking (and retro-priced!) Scoops Old Fashioned Ice Cream Store, Earl Brigham’s Barbershop (with 1918 barber chairs,) the casual, small-plates restaurant The Tasting Room and the fine-dining restaurant The Chef’s Table. (Clearly, it’s not hard to find a place to eat round here. We made a great meal out of happy-hour drinks and appetizers at the Tasting Room.)

The Edgewater gets high marks for its warm and friendly staff, who live on the third floor of the hotel and include four members of the Christian music group Adam’s Road, their wives, children and friends.

More things to do in Winter Garden

The best reason to go to Winter Garden is to bicycle the West Orange Trail, for which we have a separate guide. It’s a great bike trail: Once a rail line, it is safely separated from traffic with a gentle grade. It’s smooth, wide, has excellent signage, a good amounts of shade and scenery and is long enough for even the most energetic bicyclists to get a work out. Read more here. 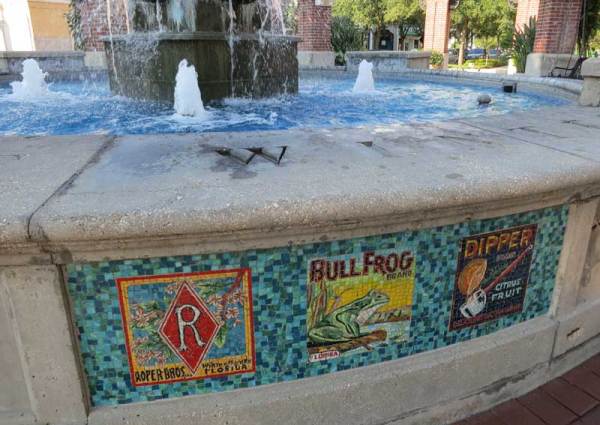 Things to do in Winter Garden: The colorful downtown fountain gets its colorful mosaic designs from historic citrus-box labels. (Photo: Bonnie Gross)

The next best thing to do in Winter Garden is stroll the attractive downtown. Benches, landscaping and fountains, including a large interactive one, make it an appealing place to relax. On Friday evenings, Winter Garden features live music in the downtown gazebo from 7 to 9 p.m.

In the downtown area, there are two history museums. Both are free, small and open every afternoon:  The Central Florida Railway Museum , where railroad buffs will find a remarkable collection of railroad china and other items, and the Winter Garden Heritage Museum, which has an old fire truck, a tractor and caboose and exhibits on citrus and Lake Apopka, among others. In both, staff members are eager to show and talk about the local history.

The downtown also is home to the historic Garden Theatre, which offers a schedule of movies and live performances worth checking into.

Things to do near Winter Garden

If you’re up for another rail-trail, consider the Van Fleet Trail in Polk City, which is about 45 miles west of Winter Garden. This trail offers 29 miles of rural solitude through the Green Swamp. Here’s a Florida Rambler story on the Van Fleet Trail.

Resources for planning a visit to Winter Garden