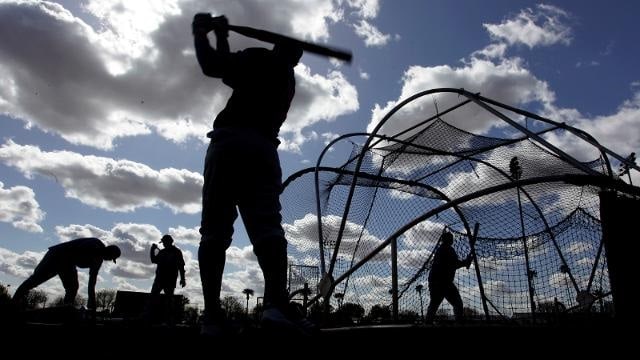 All of these teams are training for the 2020 MLB Season in Florida.

Spring Training is an authentic Florida ritual, one that I have personally enjoyed since arriving in Florida in 1978, when the Yankees were playing in Fort Lauderdale, the Expos in West Palm Beach and the Orioles in Miami.

Their home parks have changed over the years, but the ritual is the same and the “Boys of Summer” will be back in 2020.

Our annual Grapefruit League Spring Training Guide is a great resource for things to do and places to stay near Florida’s spring-training camps.

Find useful links to articles about campgrounds, lodging and things to do near each training camp, as well as reporting dates, home openers and links to schedules and tickets.

Stadium links will take you to Google Maps for directions.

George M. Steinbrenner Field has the same dimensions as Yankee Stadium, down to the inch. It was insisted to be so by the Boss, who, as the story goes, phoned the Bronx from Tampa during construction and had an employee go to the outfield wall with a tape measure during a storm. Steinbrenner Field, 1 Steinbrenner Drive, Tampa, FL

Built in 2004, Spectrum Field (formerly Brighthouse Field) is a replica of Citizens Bank Park in Philadelphia, Phillies fans should feel right at home. The stadium was built in 2004 with a capacity of 8,500 (7,000 fixed seats; grass berm seating for 1,500). Spectrum Field, 601 Old Coachman Road, Clearwater, FL 33765

In early 2019, construction began on a newly renovated stadium that will continue to be home to the Toronto Blue Jays Spring Training and the Dunedin Blue Jays. The new ballpark is slated to open for the 2020 Spring Training Season. While the ballpark has been known by many names, the official name remains Grant Field. Grant Field, 373 Douglas Avenue, Dunedin, FL 34698

Joker Marchant Stadium, home of the Tigers since it opened in 1966, is the second-oldest ballpark in the Grapefruit League. No team has called one city its spring training home as long as the Tigers, who have been playing there since 1934 with the exception of a few years in Evansville, Ind., during World War II. Remodeled to look like Comerica Park in Detroit, this is a tradition-rich ballpark to watch baseball. Joker Marchant Stadium, 2301 Lakeland Hills Boulevard, Lakeland.

Lecom Park (formerly McKechnie Field) was built in 1923 and renovated in 1993. The Bucs have trained and played their spring games at this site since 1969. Through successive renovations, Lecom Park retains the charm of its history. Lecom Park, 1611 9th St W, Bradenton, FL 34205

The Braves moved to CoolToday Park in North Port for the 2020 season, leaving their former home at Disney World to be closer to other teams. CoolToday Park features 6,200 fixed seats, accommodating up to 8,000 fans with berm berm and standing room. The training facilities include a half-dozen practice baseball fields, six multi-use fields and space for the team’s sports medicine academy. The complex is envisioned to become the heart of a planned town-center commercial and residential district  CoolToday Park, 18800 South, W Villages Pkwy, Venice, FL 34293

Among the interesting features of Charlotte Sports Park, built in 1998, is the seating. Options include 5,000 fixed seats and two berm areas. In left-center field is a full liquor tiki bar seating up to 69 fans at a time. The “Kid’s Clubhouse” is behind the berm seating in right field and features a playground. Charlotte Sports Park, 2300 El Jobean Road, Port Charlotte, FL 33948 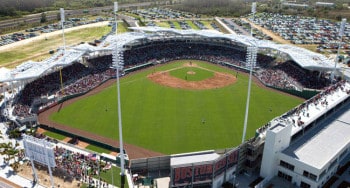 Boston’s spring training home — JetBlue Park at Fenway South — resembles Fenway Park, complete with the Green Monster in left field where fans can sit, just as they can in Boston. The rest of the outfield is constructed to resemble Fenway as well. Tradition is everywhere, including a Ted Williams statue just outside the ballpark. JetBlue Park, 11500 Fenway South Drive, Fort Myers, FL 33913

Digital Domain Park has been the home of the Mets since 1988. It’s a replica of Shea Stadium, the team’s former home in New York. No visit is complete without sampling a Taco-In-A-Helmet, the stadium’s take on Mexican fare. A recent addition is a party deck in right field, giving fans an option in addition to the tiki bar down the left-field line. Digital Domain Park, 525 NW Peacock Blvd., Port St. Lucie, FL 34986

Built in 1998, Roger Dean Stadium is one of two shared ballparks in the Grapefruit League, featuring field boxes, loge boxes, bleachers, grass berm and luxury skybox seating. Capacity is 6,700, plus 300 on the berm in right field. The stadium is in a bustling shopping complex with restaurants and sports bars packed with fans throughout Grapefruit League season. Roger Dean Stadium, 4751 Main Street, Jupiter, FL 33458

Resource links and things to do:

The Cardinals share Spring Training facilities with the Miami Marlins at Roger Dean Stadium in the Abacoa Community in Jupiter. The stadium is also home to both teams’ Class A affiliates, which play their full seasons here. Capacity is 6,700, plus 300 on the berm in right field. Roger Dean Stadium, 4751 Main Street, Jupiter, FL 33458

This is the fourth year of Astros spring training in their new digs at a shared facility with the Washington Nationals near West Palm Beach, placing them in the same area where the New York Mets, Florida Marlins and St. Louis Cardinals train. FITTEAM Ballpark of the Palm Beaches, 5398 Haverhill Road North, West Palm Beach, FL 33407.