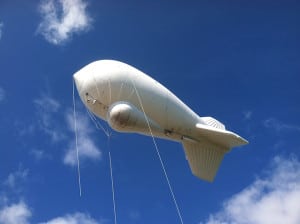 Fat Albert, the iconic blimp that has hovered over the Lower Keys for more than 30 years, is being grounded, the apparent victim of Pentagon budget cuts, according to the Key West Citizen newspaper.

The blimp, actually a blimp-shaped Air Force surveillance balloon, has been tethered to its base on Cudjoe Key since 1980, cast a watchful eye over Cuba, the Florida Straits and the Gulf of Mexico.

The demise of Fat Albert, as its affectionately known, has long stirred the imaginations of Keys residents and visitors, feeding the notorious, saloon-fed “Conch Line” with speculation on its “real purpose.” It was once accompanied by a twin that transmitted signals into Cuba in support of TV Marti, the U.S. State Department’s propaganda machine.

[mappress mapid=”345″ alignment=”left” initialopeninfo=”false”] It is generally accepted, though, that Fat Albert supported radar that sweeps surrounding seas for smugglers, military movements, refugee boats and other maritime activity that have frequently plagued this sprawling web of islands at Florida’s boot.

Coast Guard Capt. Al Young told the Citizen that they would have preferred that Fat Albert remain in place to assist the Coast Guard with its anti-smuggling activities.

“Its presence has deterrent value to illicit trafficking here in the area — both human and drug trafficking,” Capt. Young told the Citizen. “And it also allows us, here at the Coast Guard, to maintain real-time visibility of air and surface resources.”

Keys residents launched a petition drive to save Fat Albert via the White House’ “We The People” online program, but the petition fell far short of the 100,000 signatures needed for action.

For more on the story, go to Key West Citizen article  on KeysNews.com