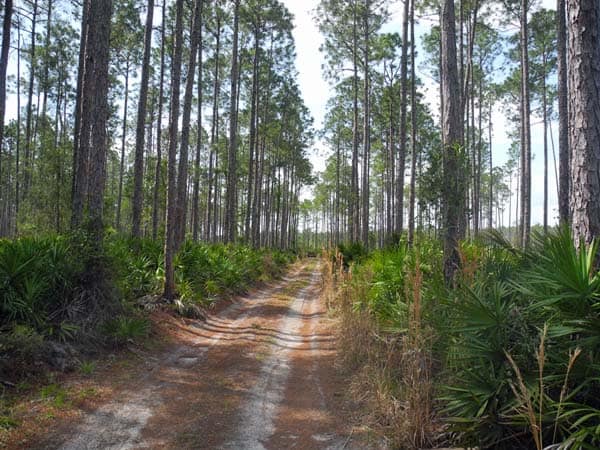 Many forest roads are off-limits to vehicles but ideal for hiking and biking.

DAYTONA BEACJ –“If you see any yellow jacket nests out there – you know, in the ground – let me know about them,” Ranger Marvin Foster said as he handed me his card.

Well, I did not see any yellow jackets, but I sure found a passel of chiggers, or at least enough to pester my lower body for weeks – a strong reminder that when hiking in the woods, don’t forget to apply the DEET.  Wearing long pants, high socks and sneakers was not enough in this wilderness.

If it comes as a surprise that there even is a state forest along International Speedway Boulevard, just west of I-95, you are not alone.

When I told long-time Volusia County residents about it, their response: “Huh? Where’s that?” or “Never heard of it.” Florida’s 34 state forests are the unsung cousins of the award-winning (and busy) state park system, largely because state parks are a little more developed and promoted for recreation, such as camping, picnicking, hiking, bicycling, kayaking, springs, fishing and boating.

But most state forests also offer these activities, albeit in a more primitive setting, and Tiger Bay State Forest is no exception.

The forest gets its name from an ancient “marine terrace” between two ridges, a “swamp” that encompasses 40% of the property.

When I visited in April 2013, it was very dry. The forest’s lakes and ponds were substantially lower than normal, and wetlands were practically non-existent.

And despite the fact that I visited on a beautiful, sunny weekend, I saw no one anywhere in the forest, other than a single tent camper and a ranger patrolling the forest roads.

I did say hundreds of birds, including dozens of hawks gliding across the forest canopy, and alligators in several of the nine lakes and ponds scattered throughout the forest.

Had I lingered, I’m sure I would have seen more wildlife, or at least evidence of resident otters, deer, wild hogs, black bears, wild turkey, quail, beaver, coyote, bobcats and a host of migratory birds, who stop here to rest along the Atlantic Flyway. 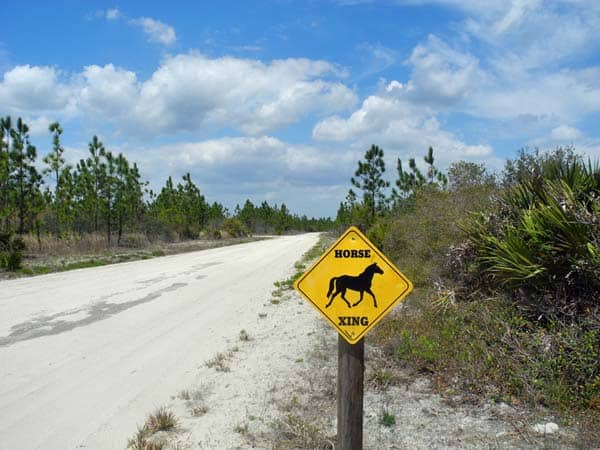 Vehicle access is limited to about 50 miles of main roads (I drove 36 miles), but there hundreds of miles of logging roads and firebreaks cutting through the forest that are off-limits for all but bicycling, hiking and horseback riding.

Access to the bulk of these forest roads is through the main Tiger Bay Tract.

There are no designated bike trails, but I can assure you that cyclists seeking an off-road experience will definitely find it here, while allowing you to travel deep into the forest for an exhilarating ride.

Designated equestrian trails are located at the north end of the Rima Ridge Wildlife Management Area, one of three tracts the make up the forest.  Although I didn’t ride or hike the equestrian trails, my experience suggests that bicycles are better off elsewhere because horses tear up the sandy terrain.

And there are plenty of elsewheres in this forest. (Note that ATV’s are banned throughout the forest.)

Other than the forest roads and firebreaks, there is a designated hiking trail, the Buncombe Hill Interpretative Trail, which starts and ends in the Indian Lake Recreation Area. Buncombe Hill is a state-designated Trailwalker Trail that you can add to your Trailwalker portfolio.

Visit the Division of Forestry’s web site for more information about statewide Trailwalker Program. Once you’ve hiked 10 of the designated trails, you earn a colorful patch. 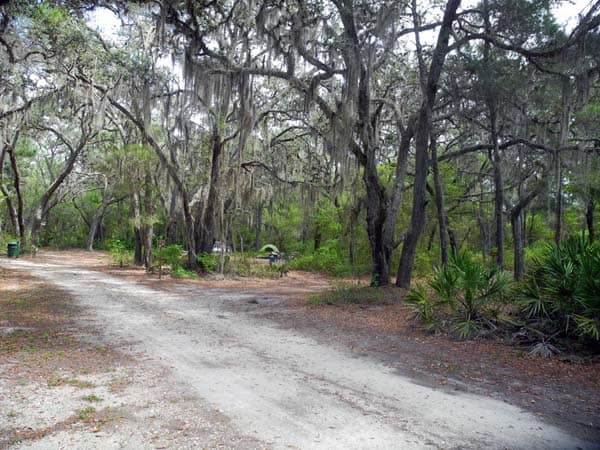 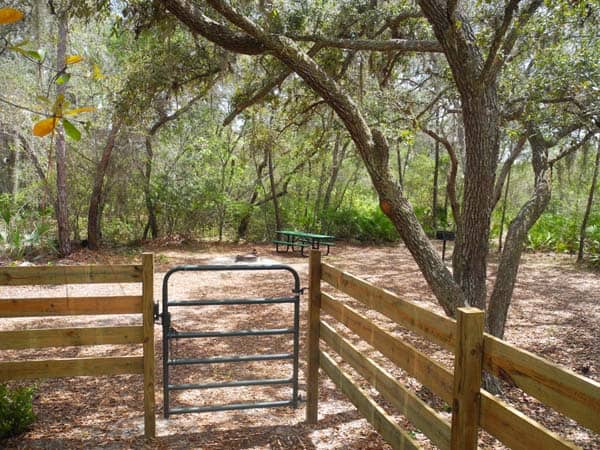 There are two designated camping areas in the Rima Ridge section of Tiger Bay State Forest, including an equestrian campground with corrals at each campsite. .

No backcountry camping is permitted outside of these two camping areas, which are easily accessible from Indian Lake Road, the main road (unpaved) through the forest.

Each of the primitive campgrounds has only six campsites, each site with a picnic table and a fire ring, but that’s it.  No water, no electric, no showers, and the only restroom facilities are a shared outhouse in the general camping area and a porta-potty in the equestrian compound.

The portapotty in the equestrian campground even has a hitching rail.

Reservations are not accepted, unless you have an organized group, and you must obtain a permit for $10 per site at the ranger station on International Speedway Boulevard (U.S. 92).

The sites in the general-use camping area are incredibly spacious, isolated and well-shaded by live oaks with little undergrowth.  All but one of the six sites (No. 6) will easily accommodate RV’s for dry-docking.

Pets are allowed with restrictions: they must be kept on a leash and not left alone, a good rule given that this is a wildlife refuge with a broad range of predatory animals. 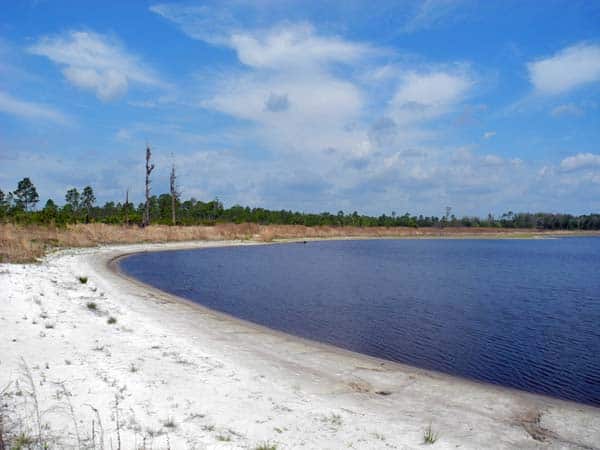 Two miles south of the general-use camping area on the main park road through Rima Ridge is a spacious recreation area with a pavilion, picnic tables, a hiking trail and a fishing pier that sticks out over Indian Lake.

Unfortunately, the day I visited in April 2013, the pier was high and dry as the lake had receded from its banks into small pond filled with alligators, who converge during dry spells on deeper water, where fish area more concentrated for an easier meal.

Indian Lake Recreation Area, actually a sinkhole, was built on the site of an historic Boy Scout camp, which existed from 1928 until the early 1930s.

If you hear gunfire, as I did, be aware that it comes from the firing range a few miles back on Indian Lakes Road. During hunting season (see below), you’ll probably hear it all around you.

This forest would not be high on my list as a paddling destination.

About a mile north of Indian Lake, halfway to the campground, is Scoggin Lake, my choice for kayaks and canoes.

Again, it was dry, and the lake was very low when I visited, but there was a kayak launch that appeared well-used, although not on this spring weekend.

Scoggin Lake is big enough to be worthwhile unloading the kayak or canoe from your rooftop, but this is not a paddle trail, merely a lake where you can get out on the water to quietly observe (and photograph) wildlife. And that could be cool. I loved the scenery there and wished I could have paddled out into the lake, if for no other reason than to sit, watch and listen. 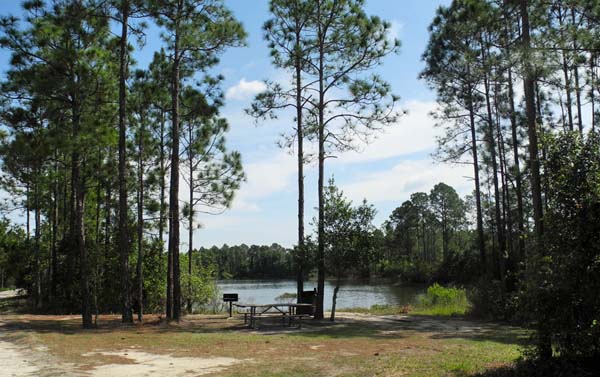 Bear Pond in the Woody Tract

There are also three decent-sized ponds in the Woody Tract ( south side of U.S. 92) that lend themselves to limited use of kayaks and canoes for observing wildlife and, particularly, for fishing.

All three ponds are man-made.

The two ponds at the end of the road lie in the shadow of Interstate 4, though, so a quiet day of fishing will not be in the cards. That may explain why they, too, were absent of anglers.

Bear Pond, on the other hand, is far more peaceful, and it even has a single, well-shaded picnic table that was inexplicably unoccupied on this spring weekend.

The forest is open to hunters during five hunting seasons, although overnight camping is not permitted except in the designated camping areas:

Trapping is prohibited; fishing and frogging allowed year-round; permits are required (no exemptions).

There are five public access roads to the forest’s three separate tracts, and one of those entrances is a historic brick Pershing Highway, which was built in 1917, linking Daytona to Deland.

1)      Pershing Highway provides access only to the main Tiger Bay Tract, where you’ll find the bulk of forest roads and firebreaks for hiking and biking. Drive a quarter mile past the Ranger Station on U.S. 92 and turn right (north). After about a half mile of brick road, you’ll see the entrance to the forest at Gopher Ridge Road.

2)      Indian Lake Road provides access to the Rima Ridge Wildlife Management Area, where the campgrounds, recreation area and the equestrian area are located. You will first go through a Volusia County government complex with a youth detention center, road maintenance facility, prison and firing range.

3)      Access the equestrian area and Rima Ridge WMA via Rima Ridge Road, off State Road 40 on the north side of the forest.

4)      The Woody Road Loop off the south side of U.S. 92, about a half-mile west of the Ranger Station, offering access to Rattlesnake Pond and Woody Pond.

5)      The Dukes Island Road access, which takes you to Ranch Pond, is a half-mile east of the Ranger Station on the south side of U.S. 92. Note: This entrance was closed on April 15, 2013 for road improvements. Reopen date is unknown.

Other than equestrian day-use fees ($5 per stall) and camping fees ($10 per campsite), access to Tiger Bay State Forest is free.

An interesting note about Ranger Foster’s yellow jackets:  Foster harvests yellow-jacket nests and sends the live wasps to a laboratory in Maryland where the venom is removed to produce antidote serums for people who have allergic reactions to stings.

A firestorm swept through Tiger Bay State Forest in 1988, destroying about half of the forest, so major sections of the forest are new growth. You can readily identify areas affected by the blaze. An aggressive reforesting project is bringing back the pine forests that were destroyed.

This area of Florida is particularly susceptible to forest fires during the dry season, which ends in June, so be careful with open flames. 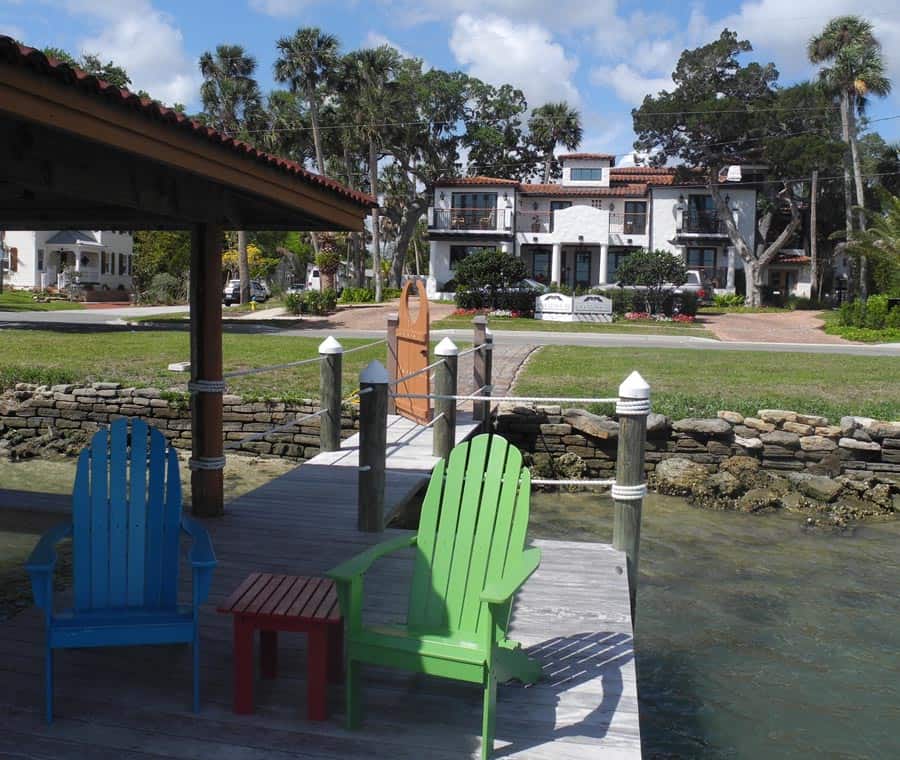