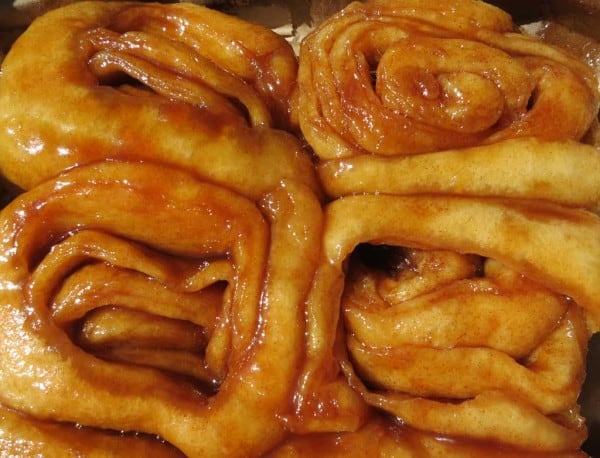 Knaus Berry Farm is how folks in the southern tip of Florida know cool weather has finally arrived. And in April, the end of the Knaus Berry season means the glorious winter is over.

From late October to mid-April, the line forms for the best fresh cinnamon buns and pecan rolls in Florida – some say the world. 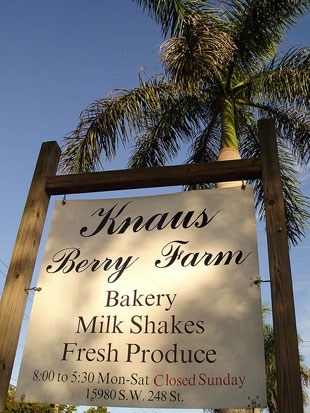 The Knaus family has operated a farm and bakery in the rural Redland area south of Miami for 50 years. The roadside store is only open in winter. (I love the message on their web site: “Lord willing, Knaus Berry Farm is open every November to mid-April.”)

Knaus Berry is the sort of place you don’t expect to find in Florida: Thoroughly Old World and traditional.

Knaus Berry Farm in Homestead: The wait was one hour and 15 minutes for this Saturday afternoon line. (Photo: Bonnie Gross)

The folks who run the farm look Amish, with bonnets, long beards and plain cotton clothes. They’re not Amish, they’re members of the German-origin Church of the Brethren, often called Dunkers because they believe in full-immersion baptism.

The religion practiced by those visiting Knaus Berry, however, could better be described as the Cult of the Cinnamon Roll. (Evidence: A YouTube vido called Mission Cinnamon Roll.) From the day it opens, Knaus Berry draws long lines. Don’t be discouraged: They move fast. (If the line goes out to the road and starts to parallel the road, that’s about an hour wait.) 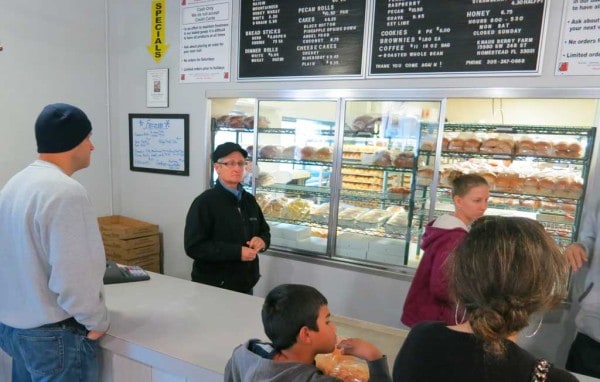 Inside the bakery at Knaus Berry Farm: If you peer through those windows, you see staff making those famous rolls. (Photo: Bonnie Gross)

While the cinnamon rolls ($1.50 cents each) are famous, other products have avid fans. The pecan rolls ($16 for 10) are heavenly. Many swear by the herb rolls ($5.80 a dozen). There’s guava pie ($11.50) for a tropical treat. Another whole fan base goes for ice creams and milkshakes.You can special order authentic shoo-fly pie ($11.50) or try a variety of cakes and cheesecakes.

In the right season, Knaus Berry Farm is one of the few u-pick strawberry farms left in South Florida. It also offers u-pick tomatoes, and variety of other locally grown vegetables. (The season depends on the weather — strawberry-picking season usually started in late December and are picked through early April. Check the Knaus Facebook page for updates.)

Make a day of it exploring the Redland

The Redland is an agriculture enclave between Miami and Everglades National Park. It is a whole other world than the urban South Florida only minutes away.

Here’s our guide to exploring the Redland.

The hard part: Deciding where to have your milk shake, because there are several great places that specialize in high quality fresh fruit milkshakes.  Knaus Barry Farm, of course, is famous for its strawberry shakes.  A local competitor is Robert Is Here fruit stand and petting zoo. (One way to decide: If it’s a Sunday, there’s no stopping at Knaus Berry Farm but the others are open.)

Other great stops in the Redland area:

[…] And I feel better knowing that she has has had the experience of a strawberry shake and cinnamon roll from the Knaus Berry Farm. […]