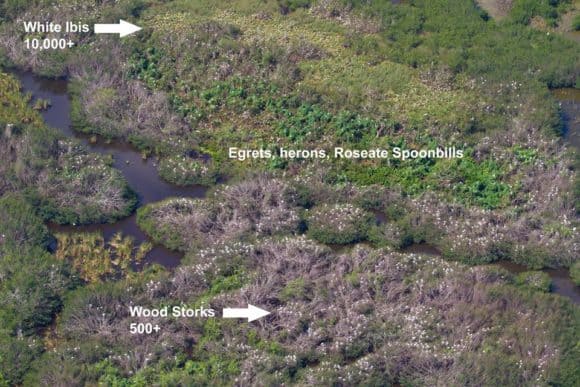 I’ve been visiting Everglades National Park several times a year for 40 years, so when I heard that a “super colony” of nesting Everglades birds formed in the park for the first time since the 1940s, I had to go.

The super colony was described in an intriguing Facebook post by the national park in the spring of 2018, and it contained no location:

“Wading birds are doing something SUPER in the park! When tens of thousands of birds gather to nest, they form something called a super colony. So far this nesting season, park biologists have found two super colonies in the southern portion of the park – something not seen since the 1940s. Estimates of nesting wading birds now in the park exceed 25,000. That is a lot of mouths to feed! Birds may hunt near roads or fly low over roads as they return to their nests with food for their young. Do your part to help these birds nest successfully – do not disturb nesting birds and follow all posted speed limits when driving in the park.”

On April 6, 2018, we visited the park and confirmed what we had expected: The super colonies of nesting Everglades birds were far from any location accessible by car. According to rangers at the Flamingo Visitor Center, the colonies were on the western side of the park in the wildest area about half way between Everglades City and Flamingo.

Why was 2018 such a successful nesting year in the park?

The previous year’s hurricanes and high water levels allowed the fish and aquatic animal population to increase, a ranger explained. Then, the water level lowered gradually all winter, without an inconvenient downpour that can be hazardous to nesting. So in spring, with water levels very low, conditions were perfect for lots of easy-to-find food for lots of chicks.

I was not at all disappointed to drive 90 minutes to the park and NOT see the super colony because EVERY visit to Everglades National Park shows you something new.

Here’s why it was a terrific day: 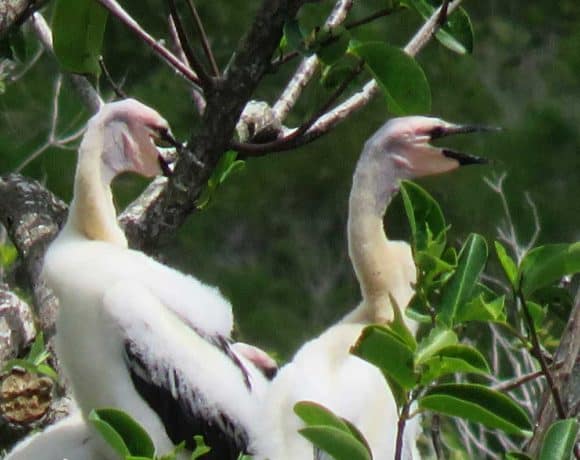 1. Gawky (might I say ugly?) baby anhinga chicks are clearly visible in a nest along the Anhinga Trail.

2. We had a picnic at Long Pine Key and a cardinal sat on a branch over our head and trilled a concert for us the whole time. 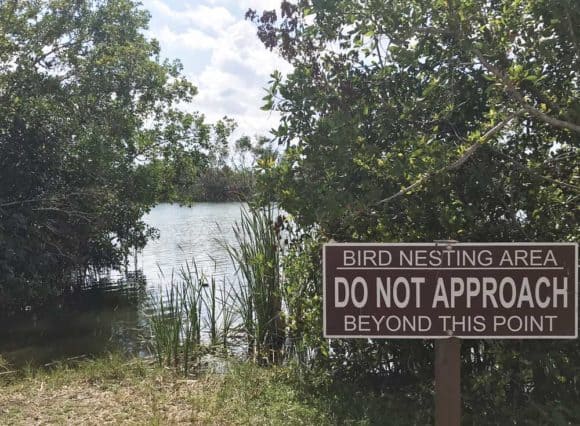 3. So many birds are nesting at Paurotis Pond that you can hear the din of squawks and squeals across the lake. Roseate spoonbills were visible with binoculars across the lake and kept flying in and out of their nesting area. You can’t get close to the nesting birds, but we are told sunrise and sunset is a good time to see a lot of bird parents coming and going. 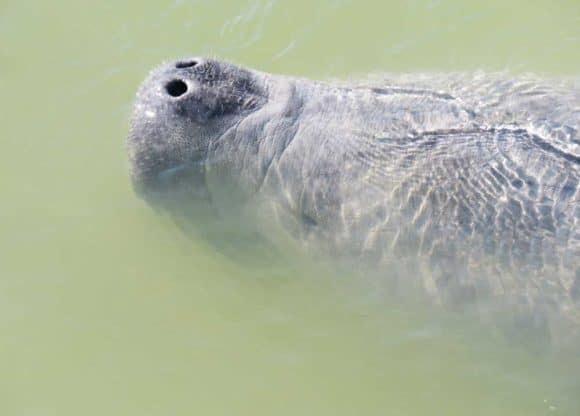 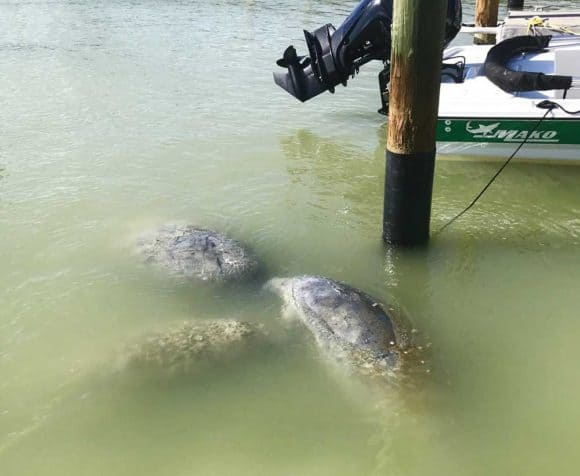 4. Three manatees showed endless interest in a boat and a rope that was in the water at the Flamingo marina, drawing a dozen of thrilled onlookers. I had never seen manatees in Everglades National Park, and these guys hung around for so long we actually moved on before they did. 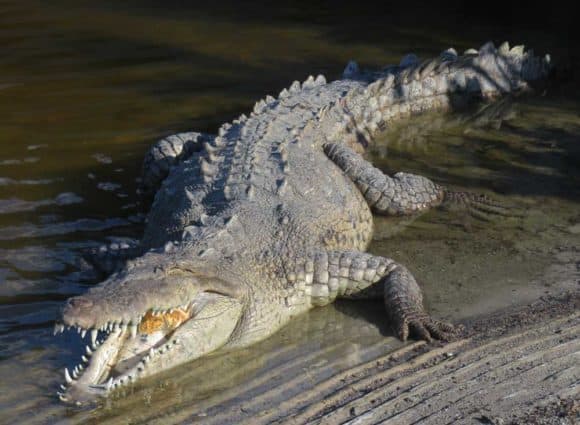 5. In another area of the Flamingo marina, a crocodile seemed to pose with his mouth open in a well-lit spot for all to see. The croc was so still, he could have been stuffed. Finally, he closed his mouth but didn’t move another muscle. 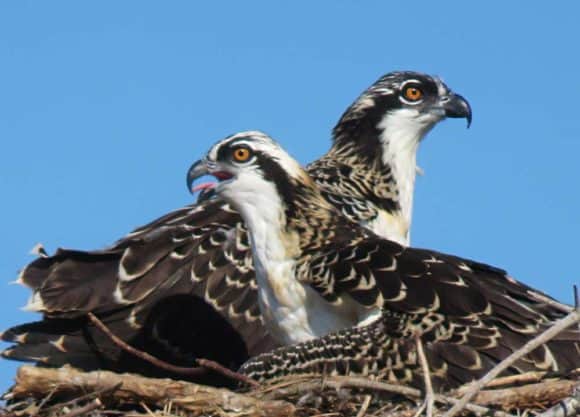 6. In between the manatees and the croc at the marina, an osprey had built a nest in a marina light fixture. The sprawling nest had two baby osprey, clearly visible to all, undisturbed by people snapping photos. 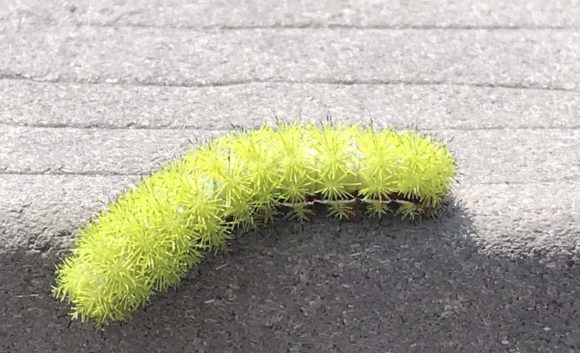 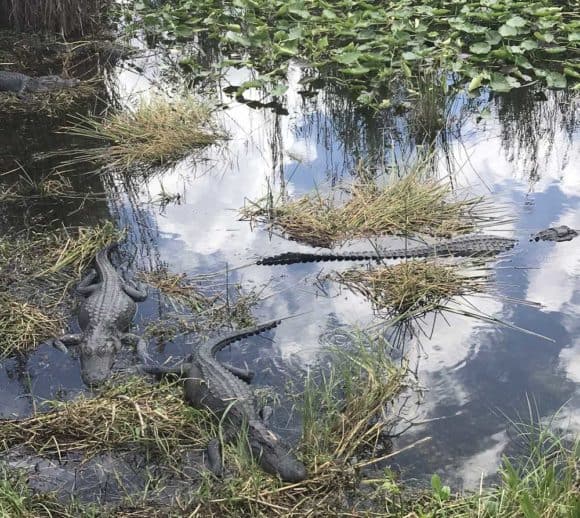 8. I never tire of seeing a pile of alligators in the clouds (well, in the reflections of clouds.) These guys were in the alligator pit at the end of the boardwalk on the Anhinga Trail. In past years, we’ve seen large gators there in even greater numbers. This year, the gators were smaller.

If you’re interested in exploring the Everglades before the end of the dry season, this Florida Rambler guide offers many resources for planning a visit, from kayak trails to hikes to the historic Nike base inside the park: Visitor tips for exploring Everglades National Park