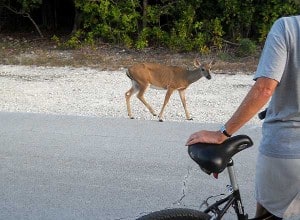 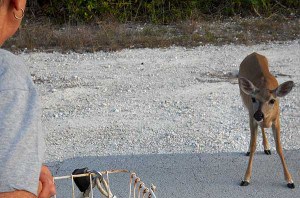 I’m originally from Wisconsin, a state with 5 million people and 1 million deer, but I still get a thrill out of spotting deer on a hike or ride.

For years I drove through Big Pine Key, slowing down so as to avoid colliding with the tiny, endangered Key deer indigenous to the island, but I never spotted one.

Eventually, we booked a weekend at a bed and breakfast on Big Pine Key and instantly my family saw Key deer all day every day.

We were charmed by their diminutive size — you see people walking bigger dogs. They are disturbingly friendly; again, the analogy to dogs comes to mind, and you know that can’t be good for them. Rustle a potato-chip bag and the deer coming running. Of course, we didn’t feed them, but plenty of folks must have. The deer live in such proximity to people they have no fear. What they should fear are our cars — that’s what kills them.

In 1957, there were only 27 Key deer left, but with the establishment of the refuge and its efforts, the species has rebounded. Prior to Hurricane Irma, the U.S. Fish and Wildlife Service estimated there were 1,100 deer on Big Pine Key and No Name Key. After Irma, Service staff estimated the population at 949 Key deer in the same areas.

So, if you’re an animal lover, how do you see a few Key deer?

If you get lucky, you might see them by the side of the road on the Overseas Highway. (I saw three that way late on a January afternoon this year on a return trip from Key West.)

You can stay at lodging on Big Pine Key, as we did. (See some links at the end.)

You can visit the visitor center for the National Key Deer Refuge for maps and information that will help you explore. (The visitor center is a little hard to find. It’s in the back of a shopping center.)

Refuge lands include an old quarry filled with freshwater called the Blue Hole. There’s an observation platform and nearby two short trails, one into a tropical hardwood hammock, the other through pine rocklands to a freshwater wetland slough. These are recommended spots to watch for deer. (I’ve tried this mid-day, however, and not spotted deer.)

On a recent trip, we found what I think is a sure thing: We bicycled through No Name Key, an island that is part of the refuge, in early evening and saw countless Key deer. (Timing, of course, is everything.)

How do you get there? As you drive through Big Pine Key, there is one major intersection. There are two roads heading east off of U.S. 1. One, Wilder Road, is clearly labeled No Name Key. Follow it (and the signs) to Watson Boulevard, which eventually crosses the scenic bridge to No Name Key.

If you brought your bike, I recommend parking on Big Pine Key and peddling over the bridge to savor the view. Then, it’s about two miles to the end of No Name Key on a good road with very little traffic. (There are only about 50 houses on the island.)

As we cycled through No Name Key, we spotted several deer grazing along the side of the road, including toy-like fawns. If we paused our peddling, more deer cautiously approached us, most likely looking for a handout.

We sprayed ourselves with insect repellent, and mosquitoes did not bother us. The poor deer were bedeviled by flies.

At the end of the road you can thread through some trees to look over the water. This is the former site of the ferry landing that, before the Overseas Highway was built in 1938, connected the Upper and Lower Keys.  Ernest Hemingway fished here, according to a biography, and No Name Key is also famous as the rugged training grounds for anti-Castro forces in the early 60s.

Where can you stay on Big Pine Key to see Key deer?

There may be other spots, but I can vouch for the location of these three:

Deer Run Bed and Breakfast. We stayed here under previous management, but based on this web site, this is now operated as a vegetarian, adult-oriented inn. It still looks wonderful.

The Barnacle Bed and Breakfast. We haven’t stayed here, but it’s on the same road as Deer Run and thus visited by the same deer.

The Old Wooden Bridge Cabins are located right at the bridge to No Name Key. Read more.

No Name Pub is a must-stop for fresh fish, pizza or No Name Ale  if you’re in the neighborhood.

The Old Wooden Bridge Marina is a good place to rent a kayak through Bill Keogh’s Big Pine Kayak Adventures.  There’s a good map of a four-hour paddle around No Name Key.