Bahia Honda State Park has it all: Top campsites and cabins plus great snorkeling 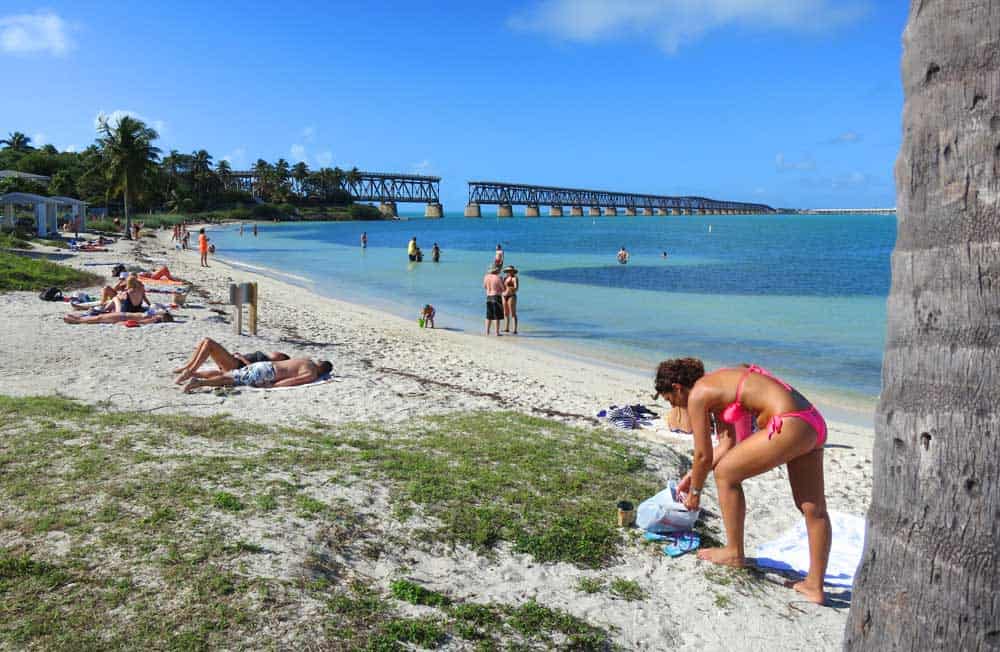 The historic bridge and the Bahia Honda State Park beach in the Florida Keys.

People love the Bahia Honda State Park beaches — many people call them the best beaches in the Florida Keys.

Me? What I love best is the 100-year-old Bahia Honda Bridge.

Bahia Honda State Park is 45 minutes before Key West on the drive down the Keys, just beyond the Seven Mile Bridge. It has something rare for the Keys, a natural sand beach, plus some of the most sought-after camping sites in the Keys and terrific cabins.

But it also has the historic 1912 saddleback bridge, a remnant of Henry Flagler’s Overseas Railway, and it’s unlike any other bridge you’ll find in the Keys. 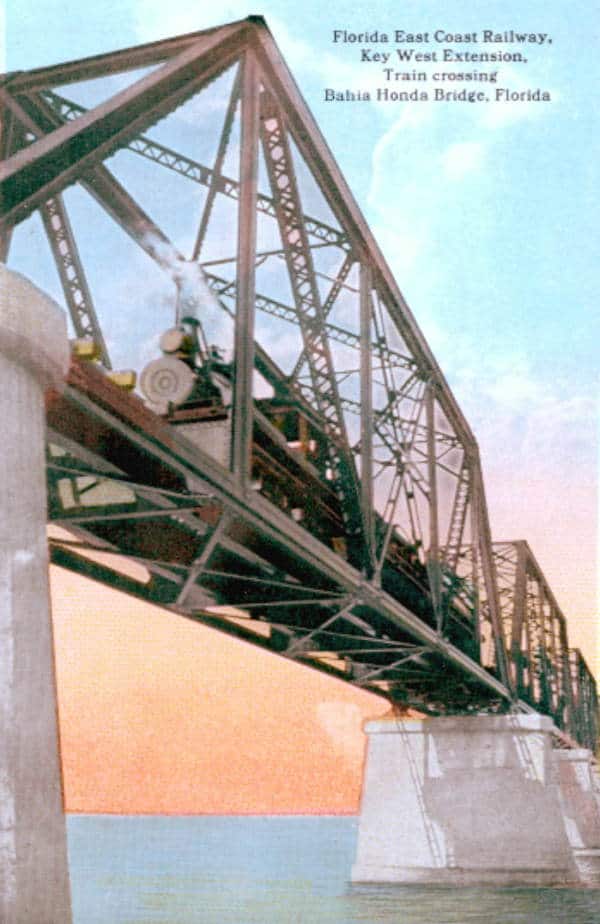 A steam train crossing the Bahia Honda Bridge prior to 1935. Photo via Florida Memory Project.

The Bahia Honda bridge was the hardest of all bridges to build in Flagler’s railroad – more difficult than the longer Seven Mile Bridge – because the channel here is the deepest in the Keys. Because the tides are strong and would be higher during a storm, it was built taller than the other bridges. For additional strength, it is a trestle-style bridge, the only one like it in the Keys. 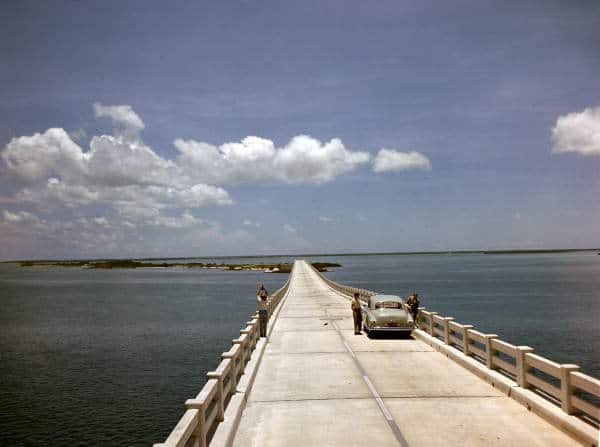 In 1955 or ’56, you drove on the top deck of the Bahia Honda Bridge and apparently there was no traffic! Photo by Joseph Janney Steinmetz via Florida Memory Project.

When the hurricane of 1935 forced the closure of the railroad, the bridge was revamped for cars. The lower level, which the trains had used, was too narrow for two lanes of cars, so they built the road on the top level. This must have been an amazing ride, and it was in use for decades. In fact, if you drove to Key West before 1972, your only choice was the road atop the old bridge.

Today, a section of the bridge has been removed at each end and a trail leads to a spot with a panoramic view of the old bridge and the entire area. 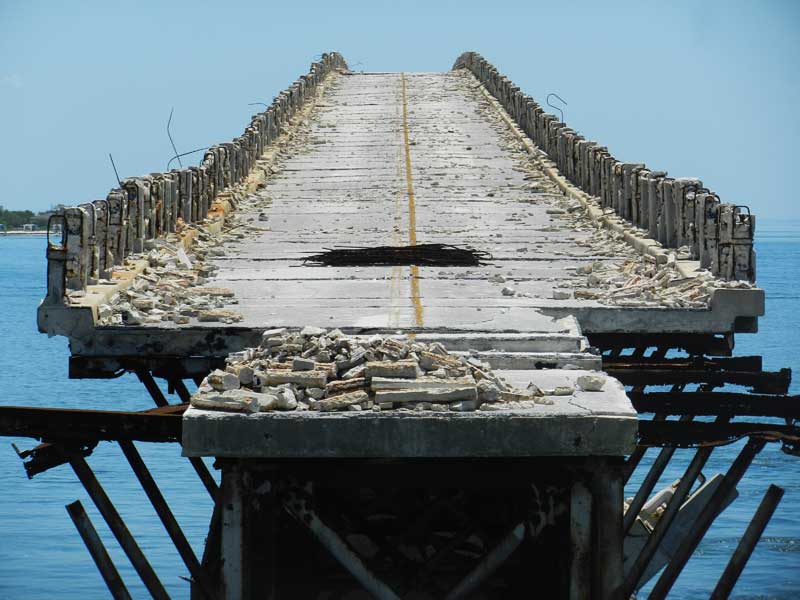 View of old and crumbling Bahia Honda bridge from the southern end, across the channel from Bahia Honda State Park. (Photo: David Blasco)

When people hear these beaches called the best in the Keys, they probably envision an expansive, wide beach. And that’s why some people may be disappointed. Yes, this may be the Keys’ best beach, but beaches aren’t all that wonderful in the Florida Keys. (For spectacular beaches, I recommend the Gulf Coast from Naples to Sarasota.) 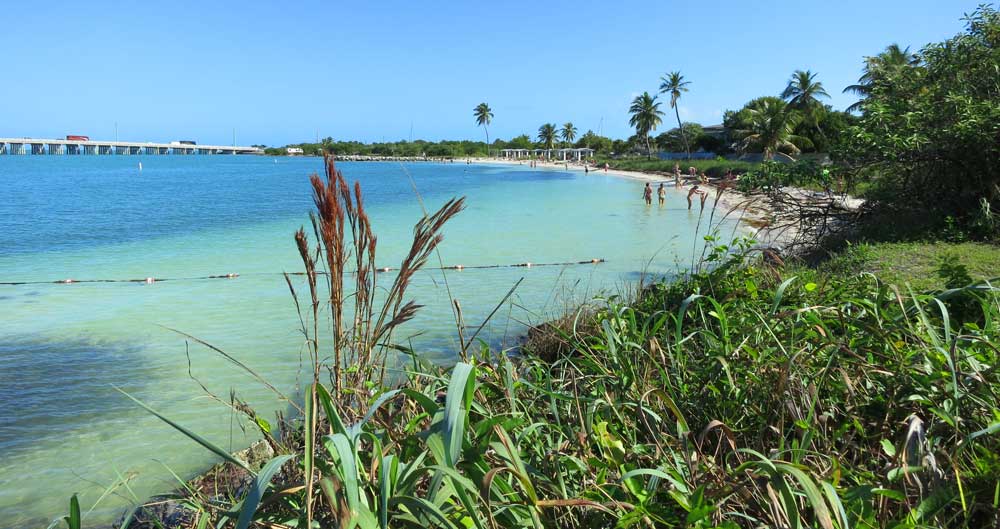 Calusa is a Bahia Honda State Park beach that was not damaged by Hurricane Irma in 2017. The storm washed out Sandspur Beach. .(Photo: Bonnie Gross)

For years, Bahia Honda had three natural, sandy beaches, but Hurricane Irma wiped out the longest one — Sandspur Beach.

The Bahia Honda State Park beaches are good for snorkeling, generally with very clear water.There is often sea grass piled along the beach: it’s good for the beach’s ecology, but plenty of visitors consider it unattractive. 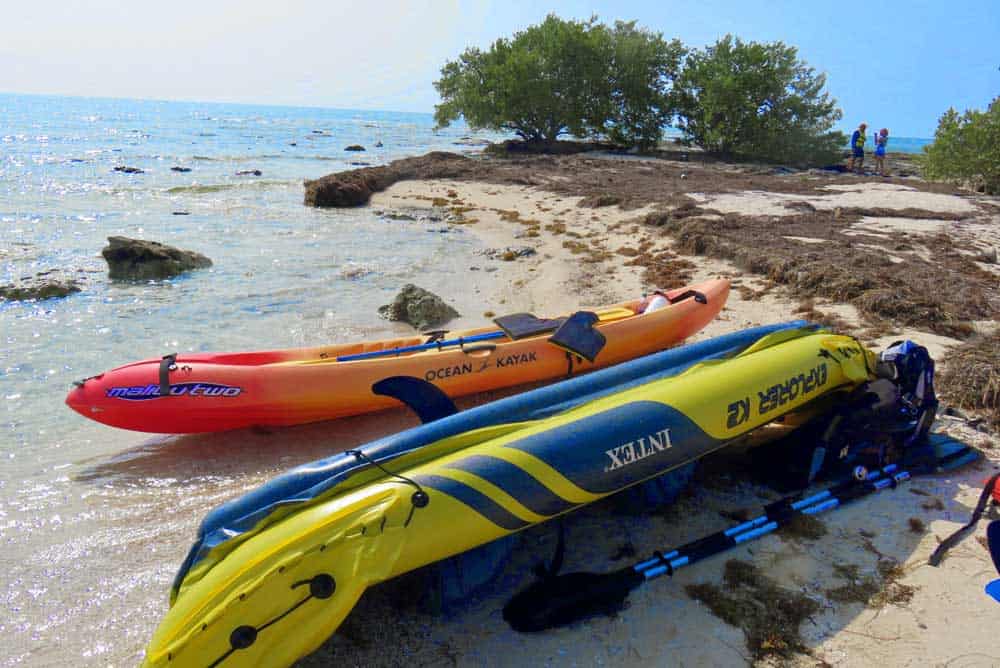 A popular activity at Bahia Honda is kayaking. With its clear Caribbean-quality water and abundant bird and marine life, the water here beckons to kayakers. Be aware, though, that currents and tides can be strong and this will be open-water kayaking. You can rent sit-on-top kayaks at the concession stand at the marina at Calusa Beach.

There are several alternatives for kayakers, including paddling two-thirds of a mile over open water to picturesque Little Bahia Honda Island and/or circumnavigating the island,.

Here’s a Florida Rambler report on kayaking at Bahia Honda.

Snorkeling trips: A concessionaire runs snorkeling trips to Looe Key National Marine Sanctuary, which has impressive elkhorn and star coral as well as extensive marine life. Tickets for adults are $29.95; kids under 18 are $24.95. You can rent all the snorkeling gear too. Details about snorkeling from Bahia Honda.

Many people think the only place to find good snorkeling is at John Pennekamp State Park. Not true. The trips out of Bahia Honda take you to reefs that are just as impressive.

Bahia Honda hiking: The park’s only nature trail Is near Calusa Beach, and it’s worth taking. The trail goes to the top of the Old Bahia Honda Bridge along a route that was once U.S. 1. There’s a great view from the top of the bridge. You can see the whole island and into the water, where you may see fish, rays or sea turtles. 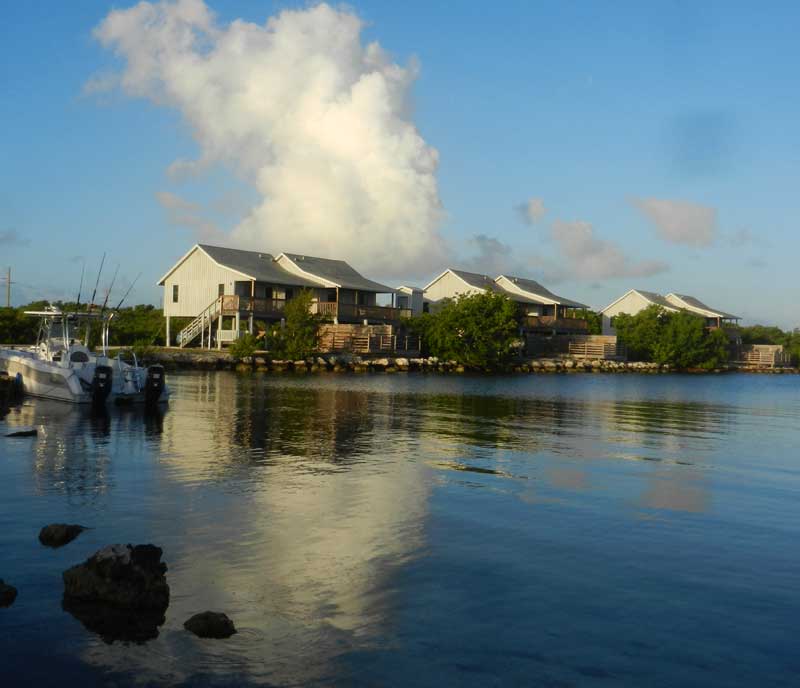 The six cabins at Bahia Honda State Park are an excellent place to stay overnight. Everyone agrees on that, which is why it requires lots of planning to get a cabin here.

You can book a spot 11 months in advance through ReserveAmerica. Even if you mark your calendar and try to book a spot the morning a date becomes available, you can still be out of luck. One reason is that when you snag a cabin date 11 months in advance, you can reserve that cabin for two weeks. If all six cabins are booked multiple days, there can be days when no cabins become available on the 11-months-out date.

The Bahia Honda State Park cabins are built on pilings overlooking a lagoon, set apart of the busier day-use sections of the park. We’ve stayed in a cabin here and found it clean, comfortable, well-equipped and with a beautiful view.

Most folks, though, aren’t going to have the patience to figure out exactly when and how to book a cabin, so this  experience remains largely out of reach for most. Still, it’s worth “vulturing” — watching ReserveAmerica for cancellations. 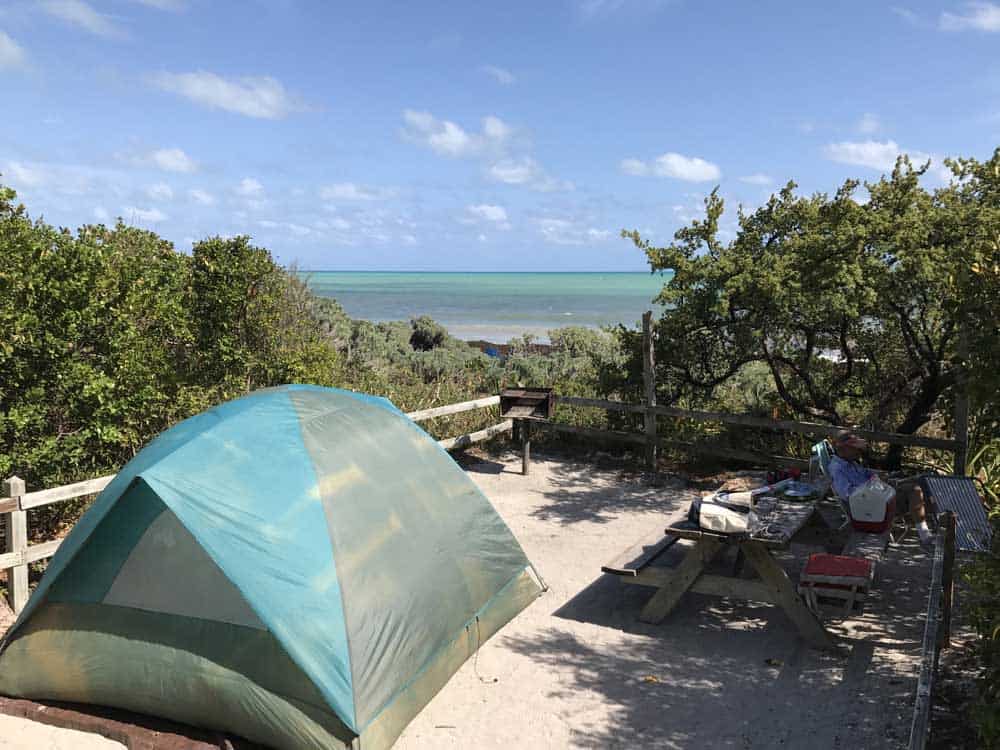 Oceanside camping at Bahia Honda State Park is highly sought after. This gorgeous campsite is located in a campground now closed because of Hurricane Irma. There is no re-open date yet for Sandspur campground. (Photo: Bonnie Gross)

Like the beaches, Bahia Honda State Park campsites were destroyed in Hurricana Irma.

There are 58 campsites remaining and they are just about as difficult to book as the cabins. If you don’t reserve 11 months in advance, your best bet is to monitor ReserveAmerica in the two weeks before your desired travel dates and watch for cancellations. In March 2017, we snagged a Thursday and Friday night at one of the best tent campsites in the park — oceanfront site #64 in the Sandspur Camground — five days in advance. (And if we could have stayed longer, there were actually three more days available, including the hardest to get night the of the week, Saturday.)

Florida Rambler colleague Bob Rountree says the best campsites are the eight sites in the Bayside Campground across from the cabins. Tenters should avoid the gravel-based sites in the Buttonwood campground on the Gulf side; they are better for RVs.  All sites are $36 per night. Florida residents over age 65 enjoy a 50 percent discount. All reservations are made through ReserveAmerica. 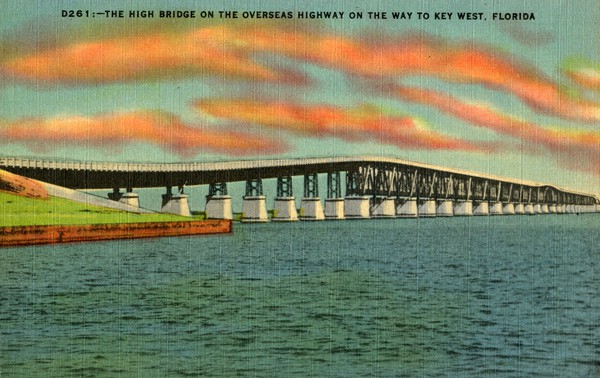 A postcard of the Bahia Honda Bridge prior to 1935. Photo via Florida Memory Project. 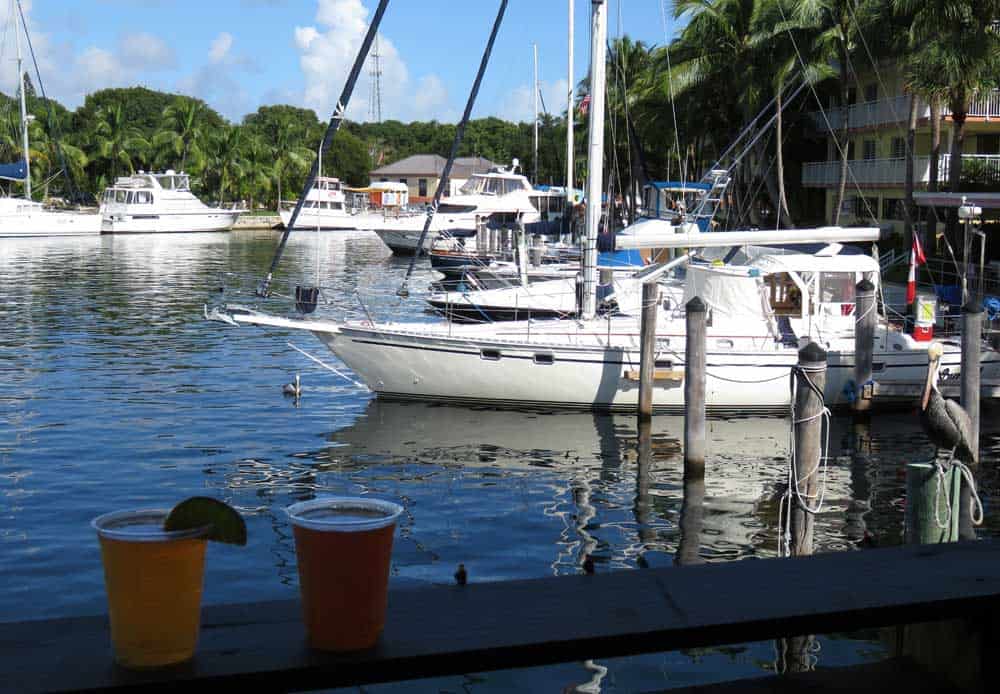 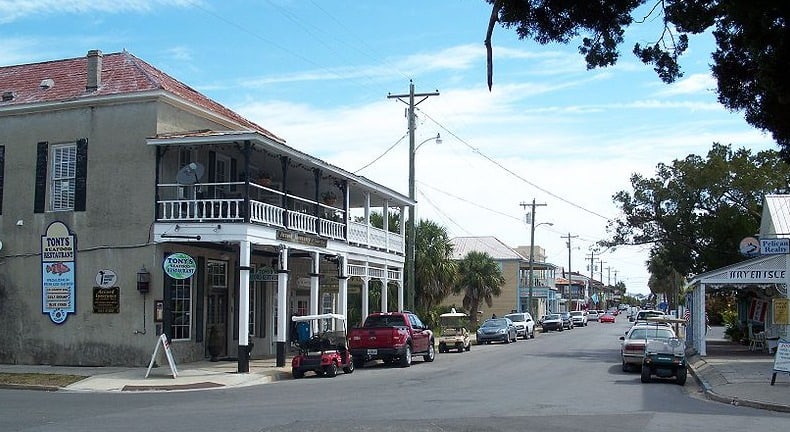 Next
Six things to do in Cedar Key, a charming, historic, off-the-beaten path spot

Your 2020 Summer Guide to Camping in Florida – Joshua Vignona