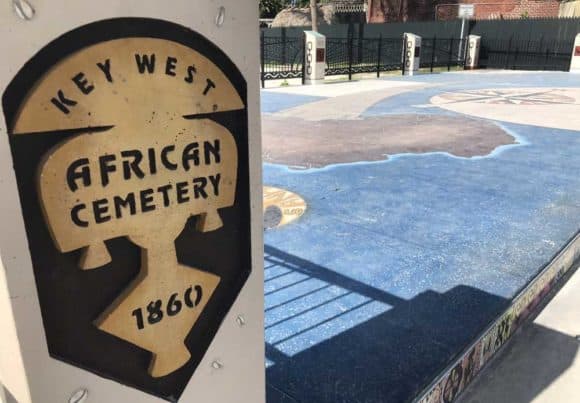 At Higgs Beach in Key West, a memorial marks the site where African slaves were buried after they were rescued from slave ships in 1860. The blue surface in the background is a map of Africa and America, showing the passageway ships sailed. (Photo: Bonnie Gross)

For the men, women and children held captive in the bowels of slave ships off the coast of Cuba, the arrival of the U.S. Navy was simply a godsend. Enforcing the nation’s anti-slave trade laws, the Navy intercepted three American-owned vessels and brought its illicit cargo to the nearest U.S. port — Key West, Florida.

The year was 1860 and, fortunately, the arrival of 1,432 Africans didn’t disrupt life in America’s southernmost city. Local residents visited the quarantined captives everyday, bringing food and clothing. The local U.S. Marshall even paid for medical care out of his own pocket.

The lucky ones were returned to Africa (although not to the area where they had lived). Others in the group weren’t so fortunate. About 294 of the captives died in Key West, most likely from typhoid fever and dysentery. They were buried in unmarked graves along the island’s southern shore and, over time, lost to lore and history.

Fast forward to today and Higgs Beach in Key West. The public beach may provide recreation to many but it is also home to an extraordinary piece of America’s past. Experts believe the beach is the site of the only African refugee cemetery in the United States. 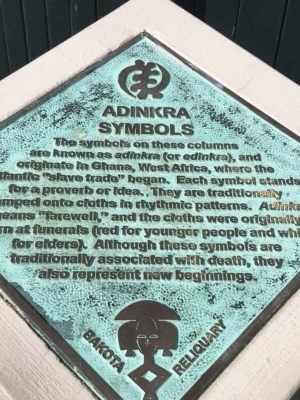 A rectangular portion of beachfront that is separated from the rest of the beach and flanked by  columns marking the site. It also contains a series of pedestals adorned with African Adinkra symbols and topped with bronze plagues.

Since the discovery of the unmarked graves, African tribal dignitaries have visited the site to consecrate the ground and venerate the buried.

Key West is no stranger to slaves, slavery or the American slave trade. Before the Civil War, the area had a history as a haven to captured slaves who were often treated by local doctors after U.S. patrol boats would seize slave ships near the Florida Keys. The city remained under Union control during the Civil War, and the area attracted runaway slaves from other parts of Florida.

By the close of the 19th century, blacks represented about a third of Key West’s population, but they didn’t suffer the harsh living conditions of endured elsewhere in the country. The legacy of the Key West’s early black population can be found in the Bahama Village, a 16-block neighborhood southwest of downtown that is the city’s historic black residential community.

Key West is also no stranger to spirits. The city’s most popular haunt remains the Key West Cemetery, 19 acres of graves, mausoleums and tombstones located in the city’s Old Town neighborhood at the foot of Solares Hill. The cemetery holds 100,000 deceased, which is more than three times the island’s 30,000 plus residents who still enjoy the land of the living. 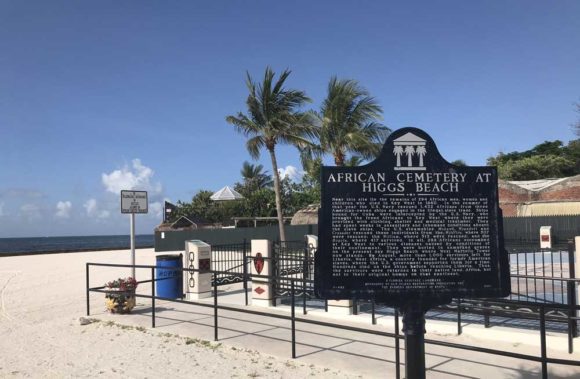 The African Cemetery at Higgs Beach holds its own among the island’s many must-see sites.

The cemetery was listed on the National Register of Historic Places as a nationally significant archeological site in 2012 and remains a unique reminder of the American slave trade and a stirring memorial to those who endured and survived it.

In 2001, after research revealed that the unmarked graves were located in the Higgs Beach area, members of the Key West African Memorial Committee and the Old Island Restoration Foundation unveiled a state of Florida historic plague to tell the captives’ story.

In 2002, a three-day survey of the beach using ground penetrating radar located as many as 15 graves. Eight years later, 100 more graves had been discovered.

How Key West reacted to the discovery that their county public beach had been built on a gravesite speaks well to the community and its cultural tradition. Instead of a debacle, the community rallied to create a moving commemoration and a celebrated historic attraction. 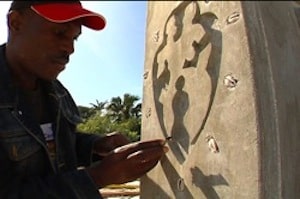 [mappress mapid=”429″ alignment=”right”] Higgs Beach Park is on Atlantic Boulevard at the south end of White Street, adjacent to the famed White Street Pier, known by locals as the “Road to Cuba” because it’s so long.

Visitors should be aware that parts of this beach attract vagrants and drifters, an issue more acute in winter. 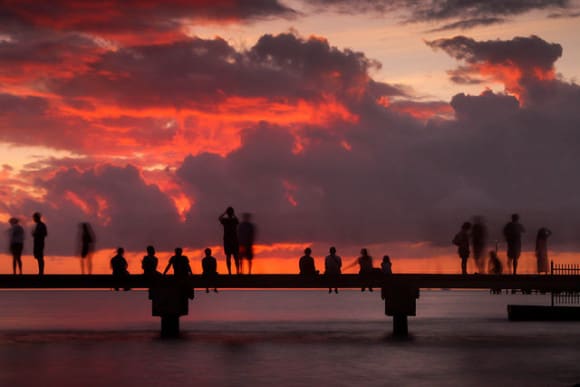 Historic Key West cemetery: A scenic stop that is full of stories

If touring cemeteries is too morbid for your tastes, visitors can always enjoy the spirits of another kind among the many bars and restaurants that line Duval Street, the famous five-mile stretch that is the commercial and cultural heart of Key West.

Duval Street has become an international tourist attraction. Its streets are lined with bars, eateries and ships, including some well-known hot spots, like Sloppy Joe’s and the original Jimmy Buffet’s Margaritaville. On some nights, the street pulsates in a carnival-like atmosphere of partying and celebration that is known to tourists and locals as the “Duval Pub Crawl.”

On a budget? Key West on the cheap isn’t easy, but here are tips