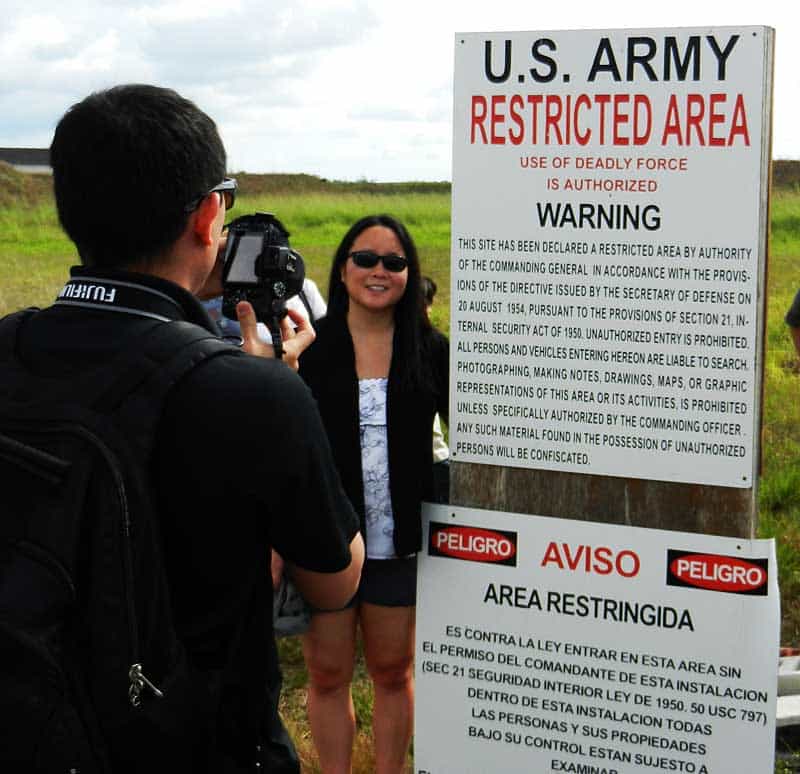 Nike missile base in Everglades: They weren’t kidding about security.

I’d been visiting Everglades National Park for 35 years and until a few years ago, I had never experienced one of its unique sights – the historic Nike base whose mission was to be ready to fire a nuclear missile in the next 15 minutes.

The Nike base in Everglades National Park is hidden deep within the park and has only been open to the public for a few years. In 2012, as part of the 50th anniversary of the Cuban Missile Crisis, the park unveiled an actual Nike Hercules missile that was carefully restored by students from Baker Aviation.

For lovers of history, folks who remember the Cold War or aviation fans, the Nike missile base tour is a fascinating trip back in time, available only during the winter season.

During the 2020 winter reason, there were daily tours at 2 p.m. through March 31.  The tour is 90 minutes long. This year the Nike site will be open to visitors to come and go between 10 a.m. to 2 p.m. during the tour season. There is no fee in addition to park entrance and no registration for the tour.

The Nike base was built in response to the 1962 Cuban Missile Crisis – the closest the US ever came to a nuclear conflict with the Soviet Union. It remained in operation until 1979 and today it is listed on the U.S. Register of Historic Places. The Everglades base was one of four Nike bases in South Florida, each with 18 Hercules missiles ready to intercept a Soviet attack from Cuba,

Since tours began at the Nike base, the park has been “overwhelmed by interest,” according to Ranger Leon Howell.

Howell and the other two rangers who give tours are all military veterans and the tour emphasizes the experiences of the men who served here, according to the tour manager, Ranger Kirk Singer.

“Today, less than one percent of the population is serving in one of the four branches of the military and most people not only never served, they don’t know anybody who has served,” said Singer, who served in the Marines for nine years. “We get some points across that may be somewhat contrary to popular opinion.”

Nike base takes you back to the ’60s 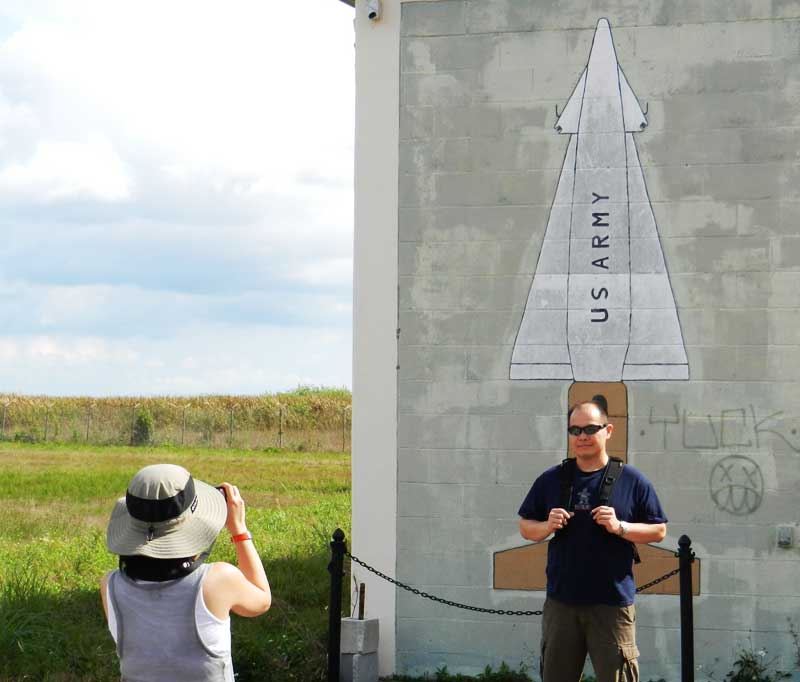 The original artwork by soldiers stationed at the Nike base in the ’60 and ’70s is still in place in Everglades National Park.

Our highly effective tour led by master storyteller Howell begins by evoking the era.  When this base was built, Bob Dylan was singing A Hard Rain’s A-Gonna Fall and the daily weather report included information on radiation levels in the atmosphere (because  of all the nuclear testing being done.) People were building fallout shelters in their backyards.

“And we were doing duck-and-cover drills in school – as though that was going to help,” Howell said. I remember it well: Nuclear war seemed very possible, some thought inevitable.

Nike base little changed from its heyday 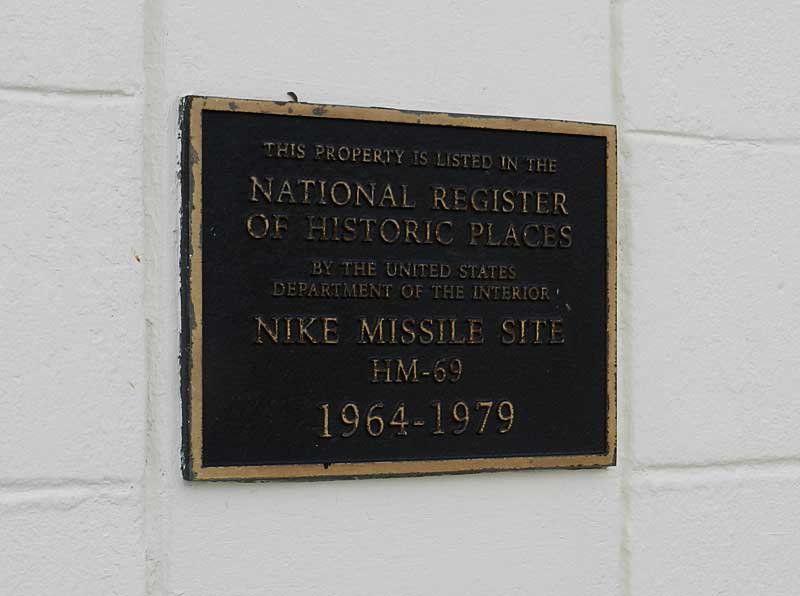 The historic Nike base is especially well preserved because it is in a national park.

Once the Nike base was abandoned, because it was in a national park, it changed little. Thus the buildings have the original murals painted by soldiers and you can see the scary original warning signs (“U.S. Army Restricted Area. Use of Deadly Force Is Authorized.”)

One inexplicable thing that hasn’t changed is that the administration building is pink. Now called the Beard Center, a workplace for Everglades scientists, the admin building for the Nike base is a large pink structure where the tours begin.  Originally, this site would have had five tall radar towers.

After getting the scene-setting intro talk, participants drive two miles to the missile site – what the soldiers called “down range.”

High security made Nike base an intense spot 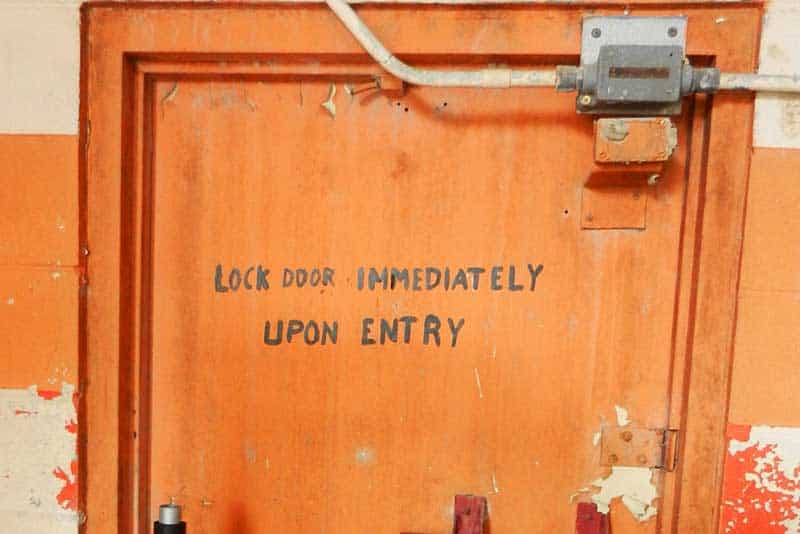 Inside the assembly building, little has changed at the Nike base, including this warning.

A locked gate is only a hint of the security once present. Because the site held nuclear weapons – or “special weapons” as the U.S. Army called them – the level of security had an intensity that is hard to imagine. Fierce Army attack dogs were kept in on-site kennels. Howell joked: “There were no ‘bring your kid to work’ days here.”

On the tour, you get to peek into the bunkers built into berms where the men hunkered down sometimes for days, to be prepared to fire the missiles. 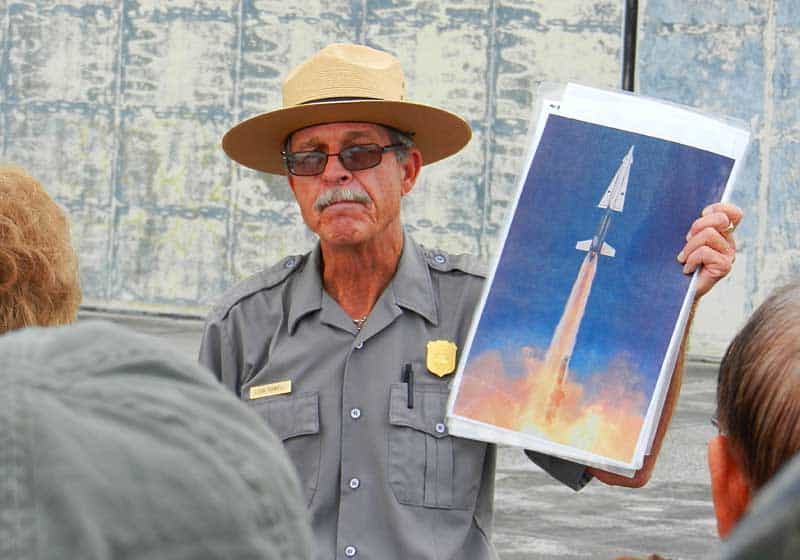 Before unveiling the missile, Ranger Howell talks about what a missile launch would be like.

The tour’s indisputable highlight, however, is the missile assembly building and Howell builds up the drama. Standing in front of the building (one of three on the site) he shows photos of the launch of a Nike Hercules missile and describes how it would be one mile high in 3.5 seconds after its explosive launch. The big reveal: Opening the doors to the assembly building on the Nike base in Everglades National Park.

Finally, it is time for the Big Reveal. With the help of any kids on the tour, Howell slides open the doors to the large assembly building where the white 1960 Nike Hercules missile gleams. 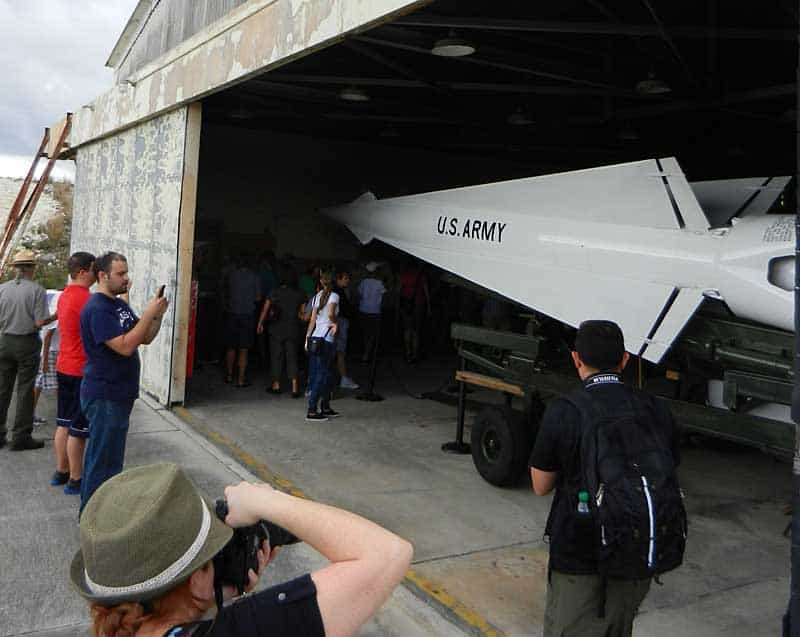 Inside the assembly building, the walls and bulletin boards are original. Doorways are still painted with the message: “Lock door immediately upon entry.”

Here also is the park’s second missile, captured as it would look while being unpacked from its crate (actually a tube). Missile crewmen assembled the weapon in this building, tested it with control panels on display, and pushed it out (by hand!) when the time came to fire. Then they’d take shelter in an underground bunker while soldiers in the pink control building 3,000 feet away pulled the trigger. Fortunately, they never had to. This Nike facility never fired a rocket even as a test. Crew members had to journey to White Sands to practice that.

Nevertheless, the men who worked here, Howell, said were “the heroes of the Cold War.” Looking back, we know they were safe here. But every time a Cuban aircraft came into U.S radar, he said, “these guys got an alert and they got these missiles ready.” For them, the Cold War was a real war.

After visiting this site, it is a little bit realer to all of us.

If you are planning a visit to the park, it’s good to call or check the schedule of tours on the park’s website. You don’t need reservations for the Nike tour;  just meet at the Daniel Beard Center, a few miles down the road that takes you to Royal Palm.

There are no bathrooms at the Nike base, so a quick stop at the visitor center is a good idea. Pick up a map too.

Be aware: Admission has been increased at Everglades National Park and starting in 2019 is $30 per car, with a pass good for seven days. (As soon as you turn 62, get a senior pass. For $80, it offers lifetime admission to national parks. Also: Take advantage of these free days in national parks.)

FREE admission to the park is available on winter weekends if you take the Homestead national parks trolley system. Here are details. In mid-December, a special trolley will be added to take visitors to the Nike base for the tours.

Here’s the history of Nike base from National Park Service.

Please confirm this information with the park website or by calling, as schedules can change.

We were there in the Everglades 2 winters ago and toured the Nike site----fantastic! Our volunteer guide was a retired Marine with tons of personal stories and info to share and he MADE our tour!!! I'd say it was one of the highlights of our Florida vacation. And thank you for doing this blog, as you provide such valuable info for those of us who visit your state. I look forward to each and every post.

Thanks so much, Theresa! You made my day. -- Bonnie

My wife and I returned to Florida in 2009 to go on a cruise out of Fort Lauderdale. We returned to the old missile site where I was stationed in 1964 just looking around. We found the old unit and at that time it was called the Daniel Beard Research Center. We walked into the main center and a nice young man, who was holding a very large avocado in each hand, said to us," May I help you ?" My reply to him was "I was stationed here in 1964 when it was a missile site during the Cuban missile crisis. His response to me was,"Come on in here! I know someone who wants very much to talk to you." He introduced us to a nice young lady (her name I have forgotten) and we had a very pleasant visit with her with the understanding that we would return the following day for an in depth interview with the museum curator. Up until this time no one knew this was an old missile site. After the in depth interview and tour of the site they took pictures of me and my wife, we were advised Associated Press would be contacting us for an interview.

I left with a good feeling that this old unit may become some day a historical site and I played a small part by furnishing information and photos of a NASA rocket motor test. The rocket motor was barged down the east coast and hurricane Betsy beached it at Homestead Bay Front Park where my wife and I got photos of the motor capsule and barge before they could move it. Sometime later, I was able to get photos of the nighttime test which was spectacular. These photos were furnished to the museum by me and someday I hope to be able to return to the old site to see the museum and what improvements have been made. At the time I was stationed there I had no idea of the historical significance and that I would play a small part in world history of that era . Very humbling!!! Thank you my country for the opportunity.

What a great story! Thank you for sharing it!