Islamorada bills itself as the “Sportfishing Capitol of the World,” and the fishing here is indeed among the best you’ll find anywhere, whether you’re chasing sailfish in the ocean or bonefish in the bay.

But that’s not all there is to this island village in the Upper Keys, a two-hour drive from Miami.

An interesting cluster of cultural attractions have been added to the local scene: the Morada Way Arts and Cultural District, two fun craft breweries bursting with Keys flavor, a top-quality museum and historic walking tours.

Islamorada has terrific recreational opportunities, including a section of the Florida Keys Overseas Heritage Trail that provides scenic and safe bicycling, and my favorite kayak trip in the Keys — kayaking out to historic Indian Key.

Here’s a guide to some of the best things to do in Islamorada, with an emphasis on the recent additions.

Exploring the Florida Keys means heat and sun, and two local breweries have opened in the last three years to quench the inevitable thirst of visitors.

The Florida Keys Brewing Company was the first craft brewery in the Upper Keys opening in 2015 and in 2018 it moved to a new taproom with a beer garden right off the Overseas Highway at MM 81.6 (81611 Overseas Highway.)

Its taproom is decorated in a colorful Keys-worthy way — with mosaics made from thousands of bottle caps from breweries worldwide. There are always a variety of locally brewed beers you can try as flights.

The brewery has a variety of programs scheduled including live music some nights.

The other brewery, Islamorada Beer Company, 82229 Overseas Highway, is only blocks away and is popular with visitors who like trying flights of their 10 different drafts with names like Sandbar Sunday, No Wake Zone and Channel Marker IPA.

The brewery sells merchandise folks love to buy as souvenirs. In an adjoining space, the beer company has opened a rum distillery.

The Morada Way district’s center is the historic 1935 Hurricane Monument and the iconic Green Turtle Inn nearby. The district stretches along the half-mile section of the Old Highway, which was the only road when the railroad ran down the middle of what is now the Overseas Highway.

An historic walking tour of Islamorada, available on the free smartphone app “Florida Stories” (Android and iOS), starts at the Green Turtle with tales of early pioneers, the most powerful hurricane to ever strike North America, Red Cross Houses built for survivors, the memorial built to honor the hundreds of victims, and one of the few bona fide pirate stories connected to the island chain.

The 10-stop, mile-long tour ends at the Pioneer Cemetery on the picturesque beach of the Cheeca Lodge, once the heart of this historic community.

Along with celebrating its rich history, Islamorada is working to recognize the many working artists and craftsmen who create a rich art scene. The Morada Way district is liveliest on the third Thursday each month, which features Art Walk with live music and performance artists.

Despite their small size and population, the Upper Keys are full of colorful history – from shipwrecks, hurricanes, pirates, and sunken treasure to vacationing movie stars. It’s where presidents go to fish, where classic movies have been filmed and where the Key Lime pie first became a must-have regional specialty.

The Florida Keys History & Discovery Center is not like a lot of local history museums – small dusty rooms inside a public library. It’s a two-story 7,500 square foot oceanfront museum with a state-of-the-art theater and exhibits designed by the same firm that did the interior of the Salvador Dali Museum in St. Petersburg.

The museum is blessed with a $1 lease for 50 years for its space inside the Florida Keys Conference Center on the grounds of the Islander.  With grants from the Monroe County Tourist Development Council and the help from the area’s pioneer families, the museum is collecting historic artifacts and completing its exhibits.

“People think Key West is where all the Florida Keys history happened, but what they don’t realize is the incredible amount of history in the Upper Keys,” said Brad Bertelli, the museum’s curator and historian. “There are so many untold stories.”

With the first floor devoted to permanent exhibits on topics like Indian Key, the original native American people, sunken treasure fleets and the tradition of sport fishermen, the museum’s upstairs houses changing exhibits and a 35-seat surround-sound theater.

The theater plays a loop of historic documentaries and interviews. In one, the oldest living survivor of the great Labor Day hurricane of 1935 is interviewed at age 101 about his experience during the storm that killed more than 400 and blew away Henry Flagler’s Over Sea Railway.  It was the strongest hurricane to ever make landfall in the United States or Caribbean.

A bike trail extends from Key Largo to Key West, but it’s not finished and some sections put cyclists next to highway traffic in a narrow shoulder.

In Islamorada, however, this trail takes the Old Highway and this section makes a delightful, scenic and safe 20-mile round trip.

Here are details about biking in Islamorada on the Florida Keys Overseas Heritage Trail.

Feed the tarpon at Robbie’s Marina

I can’t drive down the Overseas Highway without stopping at Robbie’s Marina, bayside at Mile Marker 77.

The big draw at Robbie’s is the chance to see 50 to 100 enormous tarpon swimming around the dock in clear water only a few feet deep. Pay $1 to go out on the dock, and it’s another $3 for a bucket of fish pieces to toss to them.

It might be the most entertainment you’ll find in the Keys for a few bucks.

The tarpon splash and lunge; the pelicans try to steal the bait fish and the macho guys (sorry, it is always guys) try to hand-feed the tarpon at the risk of ending up with tarpon teeth up to their wrists.

One of those little green islands you see from the Overseas Highway is actually the former county seat of Dade County.

Now a ghost town, Indian Key is a state park accessible only by boat that preserves a community that thrived in the 1830s until an Indian attack in 1840 ended its development.

It’s a beautiful and fascinating place, and a perfect destination for kayaking through the shallow clear waters.

More about kayaking to Indian Key.

The Lorelei Cabana Bar and Restaurant, at Mile Marker 82 Bayside, has decks, chickee huts, palm trees and a sandy waterfront that create an expansive and outstanding place to watch the sunset.

Hundreds gather nightly, lining the beach with cocktails in hand, to watch the sun sink below the horizon. It’s as pure a Florida Keys experience as you can have.

Here’s a guide to the best Keys tiki bars, which includes Lorelei. 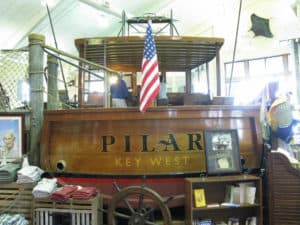 You had to know we couldn’t stray too far from Islamorada’s notoriety for fishing. Perhaps you’ll want to visit what my friends call “The Temple of Fishing,” where a replica of Ernest Hemingway’s wooden fishing boat, the “Pilar,” is on display on the main sales floor.

Just a three-minute walk from the Morada Way arts district, World Wide Sportsman, which is owned by the Bass Pro Shops chain, carries a comprehensive line of fishing tackle, clothing and accessories to outfit even the most experienced fisher.

Next door, part of the World Wide Sportsman complex, is an Islamorada staple, the Islamorada Fish Company, which has an outdoor restaurant and tiki bar, and a seafood market that serves fresh fish daily caught by its own fleet.