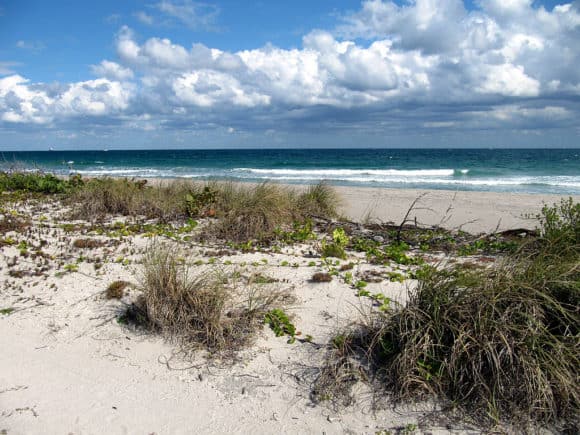 What is now Dr. Von D. Mizell-Eula Johnson Beach State Park started out as Fort Lauderdale’s “colored beach,” nad it wasn’t exactly a tourist attraction. It was accessible only by boat, leaving black beachgoers at the mercy of an inconvenient ferry service. There were no restrooms, and what the beach lacked in amenities, it more than made up for in mosquitoes.

Still, for the powers-that-be, the “colored beach” was far enough from the city’s “whites-only” strand of public beach near Las Olas Boulevard. For black residents seeking a day at the beach, the desolate island between Whiskey Creek and the Atlantic Ocean would have to do. 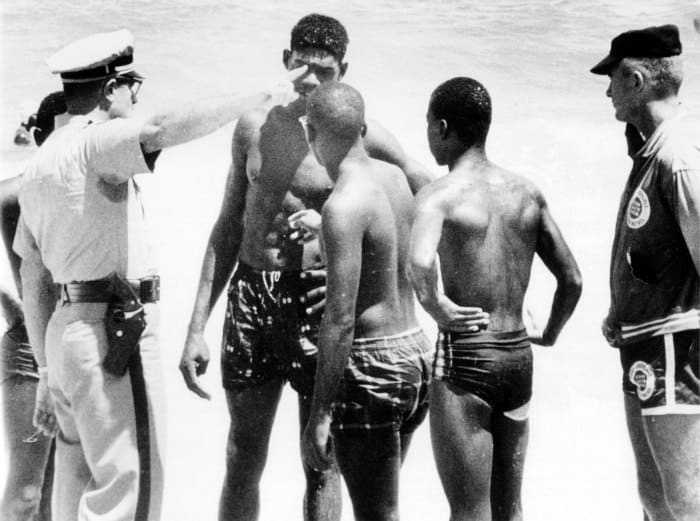 Much has changed since 1954. The Jim Crow laws are history, and public beaches are open to everyone. The site of the old “colored beach” is now a state park, with a unique distinction: It’s the only state park in Florida named for African Americans. The one-time John U. Lloyd Beach State Park was renamed Dr. Von D. Mizell-Eula Johnson Beach State Park in 2016.

The renaming brings statewide recognition to leaders of Fort Lauderdale’s black community who fought to dismantle the laws and mores that kept blacks and white legally separated in public places.

The park’s boat ramp was renamed the Alphonso Giles Boat Ramp in honor of the man who ferried black residents to the beach back in the days of segregation. 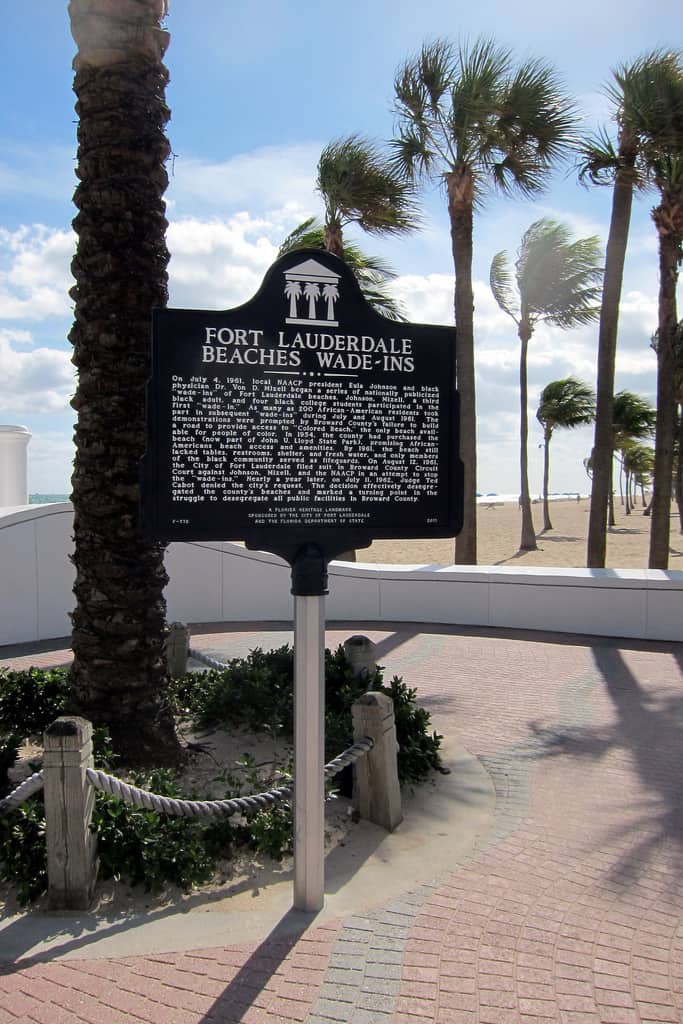 Located just south of Port Everglades Inlet, the park itself is 310 acres of recreational possibilities.

Directly east of Port Everglades and the Fort Lauderdale Airport, this stretch of beach was never developed and it is the last example of an undeveloped coastal ecosystem in Broward County. Instead of being lined with high rises, this beach is lined with sea grass, sea grapes and other native vegetation.

The Atlantic still beckons swimmers. As a public beach, the park’s shoreline is 2.5 miles long and a tranquil alternative to its more congested counterpart to the north. The sounds of the wind and waves, however, is periodically interrupted by the noise of jets flying overhead from Fort Lauderdale-Hollywood International Airport. You’ll also hear the occasional blast of a horn from a cruise ship departing Port Everglades.

The public bathrooms, boat ramps changing facilities, nature pavilions, picnic areas and in-park cafe are all very good — amenities that patrons of the “colored beach” could hardly imagine for themselves.

For boaters, there is easy access to the inlet, the Intracoastal Waterway and the ocean.

The tidal Whiskey Creek — so shallow you can walk most of the 1.5 mile length — is a favorite spot for kayaking and stand-up paddlebloards. It’s lush with mangroves and a great spot to see birds and fish

You can rent kayaks and SUPs at the waterfront cafe, Whiskey Creek Hideout, where you also can book eco-tours, full-moon kayak outings and sunset tours.

The open-air cafe has tables overlooking Whiskey Creek and the Atlantic Ocean and it would be hard to find a more scenic spot to hang out with a beverage. 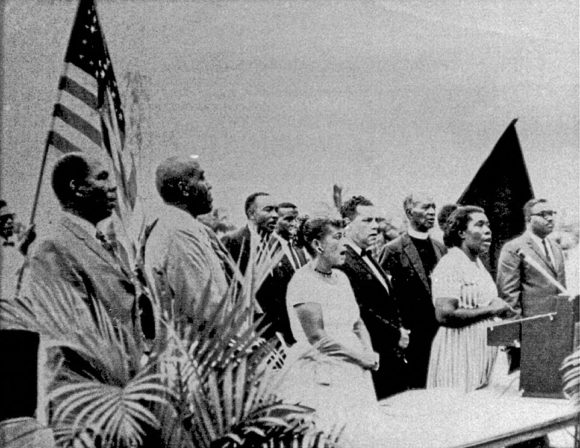 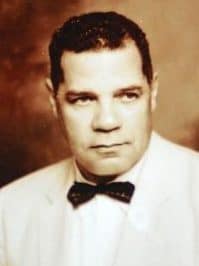 The park’s renaming is the latest change and honors a pair that have been called “Martin Luther King Jr. and Rosa Parks” of South Florida. Von D. Mizell was a prominent black physician and founder of the Broward NAACP, which petitioned for the “colored beach” in 1946. It took seven years before authorities directed then-county attorney John U. Lloyd to find a location.

In 1951, blacks in the area had their beach, but they had to depend on ferries to get there. Black leaders asked for a road to gain access to the beach. County officials agreed but it took another 10 years before they began construction, and it took a civil rights demonstration to get that.

By then, Eula Johnson, a businesswoman who operated gas stations in Fort Lauderdale’s black community, had become president of the local NAACP chapter. She had worked with Mizell in integrating the beaches and the public schools in the area. Tired of the county’s stalling, she led a protest on July 4, 1961, in which black beachgoers waded into the waters of the city’s segregated public beach near Las Olas Boulevard.

The “wade-ins” prompted the county to build a bridge to connect the “colored beach” to the mainland and sparked several lawsuits to stop Mizell and Johnson from bringing black patrons to the “whites-only” beaches. Those efforts failed and the beaches were soon desegregated. 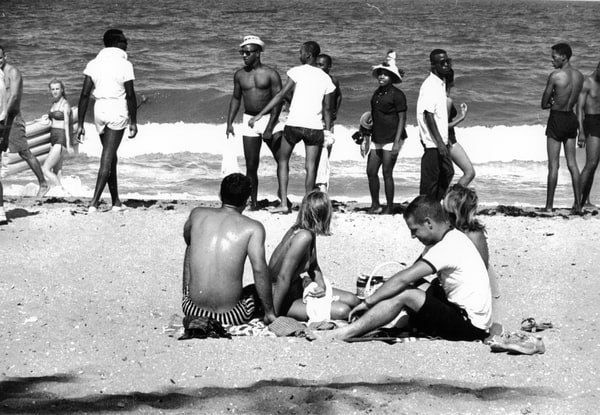 Civil rights activists in Fort Lauderdale challenged de facto segregation with a series of “wade-in” demonstrations in the summer of 1961.

Parking: There are several large parking lots, but the park can fill up on holiday weekends.

Fees: Admission is $6 per car. (Single occupant $4.) Boat launch fee is $9 but does not apply to kayaks and canoes.

Alcohol: Not permitted, except when purchased at cafe

Pets: Pets are permitted on a handheld leash in the park but not at the beach. (It’s not clear if this includes Whiskey Creek, where we’ve seen dogs cavorting in the water along the sandy shore. This must not quality as a beach.)

Location and directions:  The park is on A1A  in Dania Beach, just north of where Dania Beach Boulevard ends at A1A.