Alligator Alley: ‘Boring’ road can be a gateway to Everglades experiences 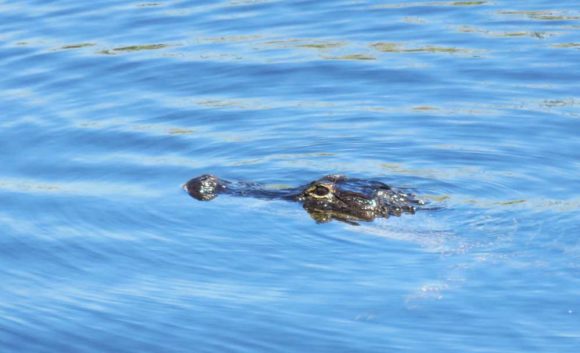 What Alligator Alley is named for: This fellow was cruising along at the viewing tower at the MM 35 rest stop. (Photo: David Blasco)

Alligator Alley has always had a reputation – initially for being a boondoggle, then for being dangerous, now for being boring.

But Alligator Alley is also the quickest way for folks in Broward or Collier County to get into the vast wild expanse of the Everglades.

Sure, an interstate highway (it’s now I-75) is not an idyllic route. If you have the time, take the more scenic Tamiami Trail across the Everglades, which offers many more opportunities to experience nature.

But if your route takes you across Alligator Alley, you CAN see Everglades wildlife and make some interesting stops along the way. (Be aware the Everglades are best experienced in the winter, when wildlife is more visible and mosquitos and no-see-ums are less present.) 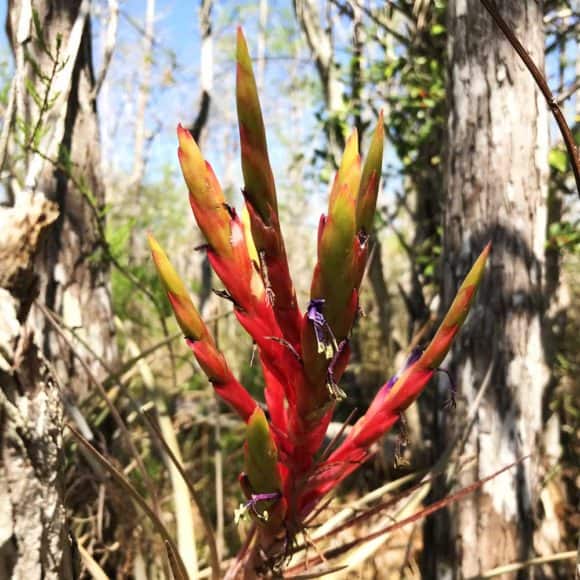 Bromeliad in bloom along the Florida Trail near Alligator Alley. (Photo: Bonnie Gross)

First: About those mile markers. Look for small green reflective signs posted low along the highway every mile.

MM 26. The toll booth. Two-axle vehicles pay $3.25 here. You’ll see this area on maps still labeled Andytown. This cracks me up. There is no Andytown. It was demolished to make way for the highway decades ago, and it was nothing more than a diner and gas station in the first place.

MM 31/32. Recreational rest stops on each side of the highway. These parking lots and boat ramps lack restrooms, but they do have picnic tables, parking and, at the right time of year, are teeming with life. On an early March morning, the water was full of fish, turtles and surrounded by a variety of birds – great blue herons taking advantage of the bounty, anhinga, cormorants, ibis, moorhen. On careful examination, a few alligators were lurking in the sawgrass across the water. The major downside: The litter is awful. 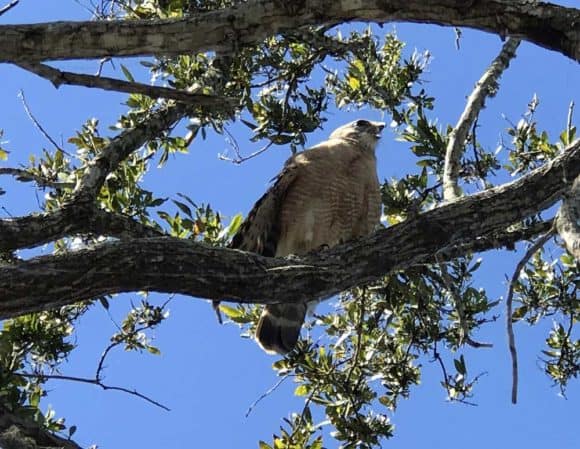 A hawk screeched from a branch just above me at the Alligator Alley rest stop at MM 35. (Photo: Bonnie Gross)

MM35: The Broward rest stop, which connects to several boat ramps and waterfront recreation areas at MM 32 and 34 on both the north and south sides of the highway.

This is your best bet for a 15 or 20 minute Everglades sampling along Alligator Alley. The rest stop has clean restrooms, vending machines and picnic tables. The best place to spot wildlife is the tower on the north side of the highway. Here we saw several alligators swimming and a hawk squawked loudly in a branch right over my head as I watched flocks of white birds against the blue sky. Again, the litter was so discouraging I wanted to bring a Girl Scout troop to help clean it up.

The boat ramps along this section of Alligator Alley are most used by fishermen. We’ve put our kayak in here, but the straight channelized waterways are pretty boring. (You get a close up view of birds and gators but there are far better places for that.) I am not a fisherman, but I am told the waterways along Alligator Alley are excellent for bass and other fish, especially in spring. I certainly saw an abundance of fish in the water, with continual splashing. 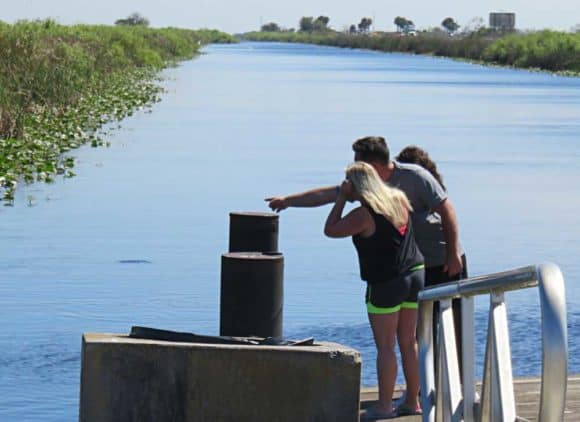 Spotting wildlife at a boat ramp at a recreation-access stop along Alligator Alley. (Photo: David Blasco)

MM 38. A recreation stop with boat ramps and picnic tables. On a recent visit, a sign said the area was closed, but there were cars present and access was not blocked.

MM 49. The Miccosukee Service Plaza, access to the Seminole reservation including the Seminole museum. The addition of a gas station mid-Alley was a breakthrough. When I moved to Broward in 1979, the Alley was a dangerous two-lane road with absolutely no services – no gas stations, no rest stops, nothing. (See below for more of the Alley’s story.)

At the service plaza, Snake Road extends for 17 miles to the Seminole Big Cypress Reservation and the Seminoles’ excellent Ah-Tah-Thi-Ki Museum. Scenic Snake Road (named for its curve, not the reptile) is a two-lane road that gets you closer to the birds and alligators that inhabit the canal alongside the road.

The real reason to drive down Snake Road, however, is to visit the Ah-Tah-Thi-Ki Museum. A visit opens with a dramatic multi-screen media presentation and its well-designed dioramas and exhibits explain Seminole history and traditions. This is a first-class museum where it’s easy to spend an hour or two. A real highlight is the 1.5 mile boardwalk through a cypress swamp adjacent to the museum. This is as beautiful a cypress swamp as you’ll find anywhere.

If you’re crossing Alligator Alley and have an interest in the Seminoles, this is worth a several-hour detour.

MM 52. Boat launch and dirt road along the Interceptor Canal. This is just inside Big Cypress National Wildlife Refuge, and it must be designed to serve hunters and fisherman — it’s not very appealing to anyone else. There’s a huge parking lot and a straight, wide canal.

MM 63. The Collier County Service Plaza and the Florida Trail. This extensive service plaza opened in 2014, and  it makes a great stop for travelers who want to stretch their legs and take a walk—from a 15 minute stroll to a hike all the way to Florida’s Panhandle! 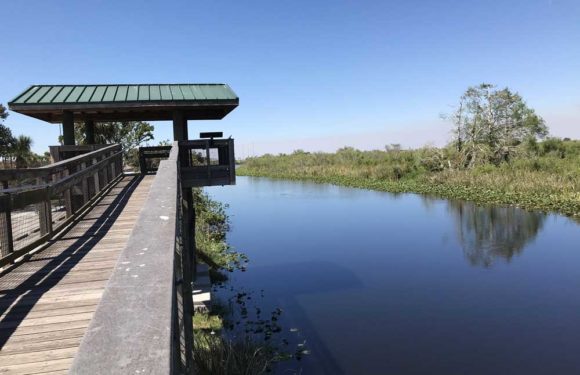 The Florida Trail runs the Tamiami Trail to Fort Pickens at Gulf Islands National Seashore in Pensacola Beach. It’s one of 11 National Scenic Trails. It crosses Alligator Alley at MM 63 and so this rest stop is also an access point for Florida’s longest hiking trail.

Having hiked several miles in both directions, there is no question, the best route for hikers is to go north along the trail. Here, the Florida Trail follows an old road alongside a canal, which attracts birds and alligators. Here’s a Florida Rambler guide to hiking the Florida Trail from Alligator Alley. The south route is wetter and less scenic initially. 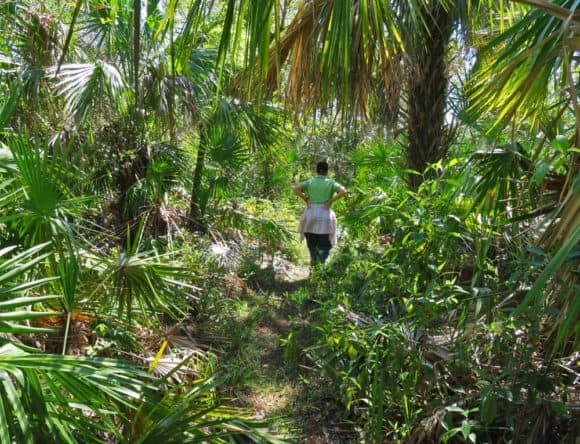 MM 70. A parking lot without facilities is located on each side of the Alley. On the north side of the highway (westbound) there is a walk-through gate but there are no marked hiking trails. This is for folks with experience orienteering with a GPS unit.

On the south side (eastbound), the walk-through gate leads to trail and then a network of other trails used by off-road vehicles. I have briefly hiked here, but did not find it terribly promising for wildlife or scenery. 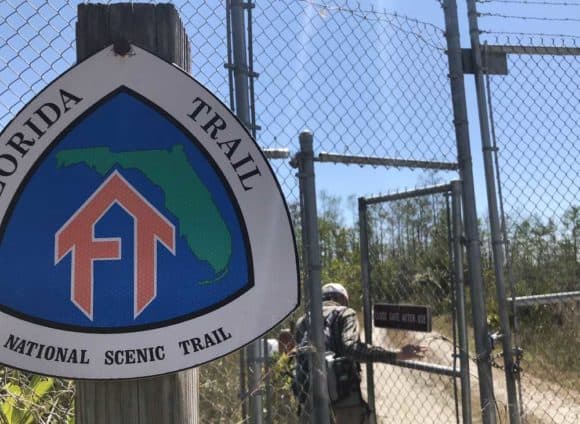 Entrance to the Florida Trail on the side of Alligator Alley. (Photo: Bonnie Gross)

MM 80. US 29. This intersection gives you several choices for recreation experiences. Within a mile of exiting, on the north side is Florida Panther National Wildlife Preserve. There are hiking trails here, though you should have no illusion about seeing an elusive panther.

Here’s a Florida Rambler guide to hiking in Florida Panther NWR and others in the US 29 vicinity.

About 45 miles north of here is one of my favorite Everglades boardwalk experiences – Audubon Corkscrew Swamp Sanctuary.

Near the Audubon preserve, Bird Rookery Swamp is an outstanding place to hike and see wildlife. It’s free and the trails go on for miles.

If you head south from US 29, in 15 minutes you’ll come to the entrance to Fakahatchee Preserve State Park, where you can hike and explore for miles in Florida’s largest state park. There are few facilities here.

A half hour south of I-75 is Everglades City, a historic fishing town known for its stone crabs and as a gateway to exploring the Everglades. Here’s a Florida Rambler story on Everglades City. 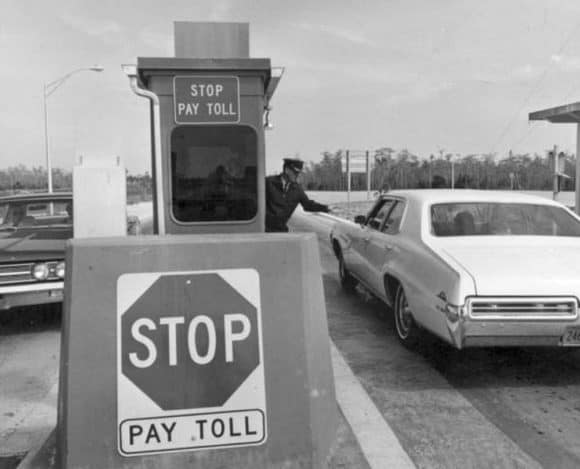 When the idea to join Fort Lauderdale and Naples by road first surfaced, people laughed, according to the late Florida historian Stuart McIver. It was the 1940s, and Fort Lauderdale had 18,000 people; Naples had 1,000. Who needed anything other than the Tamiami Trail?

By the 1960s, however, Broward and Collier counties pushed it through, despite widespread opposition. Every newspaper in the state (except the one in Naples) ridiculed the idea, including the Fort Lauderdale News.

The biggest opponent? The Automobile Association of America, which opposed all toll roads, but particularly objected to this two-lane road through a swamp as excessively dangerous. Indeed, when the road opened in 1969, the fears of the AAA were proved at least partly true. Head-on collisions on the two-lane road with deep canals alongside occurred with deadly regularity.

It was the AAA that coined the term Alligator Alley, originally meant derisively. But tourist-oriented Florida officials recognized it as a catchy phrase and soon made it official.

In 1992, the era of the dangerous two-lane Alley ended when the safer, wider, four-lane version became part of I-75.

Since 1992, fencing has been added to prevent endangered Florida panthers and other wildlife from wandering into the Interstate.

In 2004, a 50-mile stretch of Alligator Alley in Collier County became the first highway in Florida with cable barriers designed to keep cars from going into canals that parallel the highway. The cables are connected to strobe lights that flash to alert others to the fact a vehicle has hit the cable.

Today, the Alley is no more dangerous than any Interstate and feels no more remote. Nevertheless, if you get a mile or two away from the sound of the road, it is still a vast wilderness, untamed and inhospitable.

Recreation opportunities on the west end of Alligator Alley

Recreation opportunities on the east end of Alligator Alley 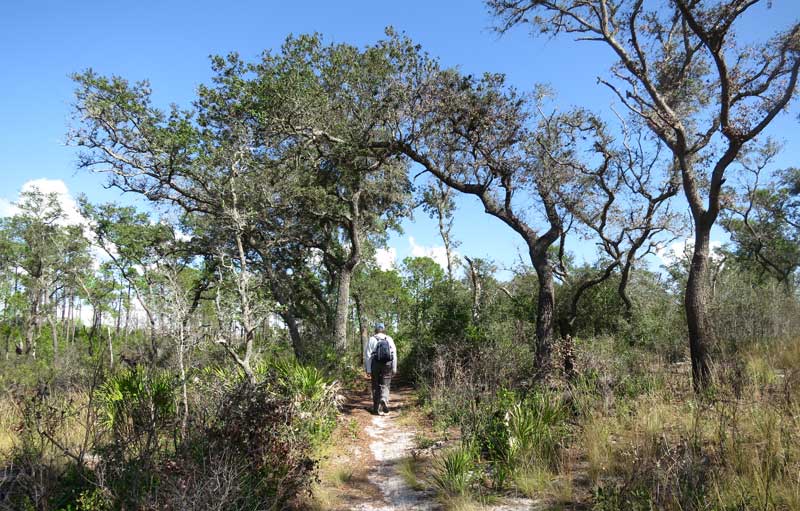 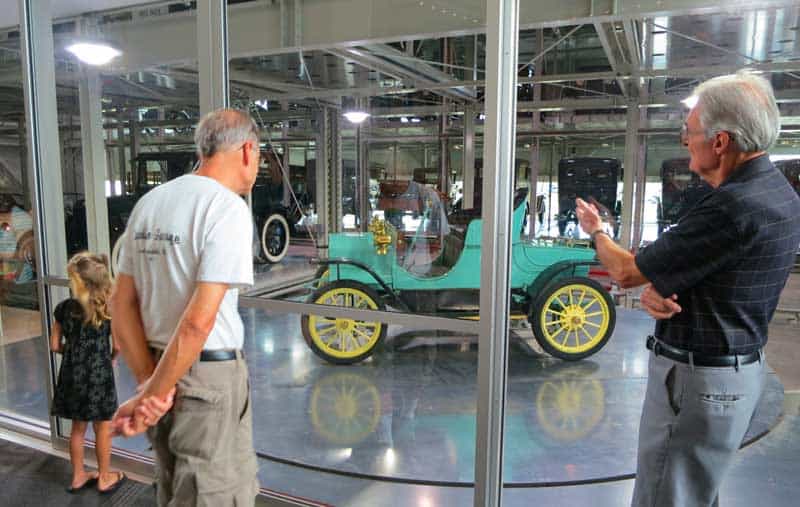 Next
Hutchinson Island's Elliott Museum: For old car lovers -- and everyone else
Click here to cancel reply.

[…] we slosh through a marshy hammock of shallow water off the L-28 levee, which runs 30 miles north to Alligator Alley. Half of all pythons in the Everglades have been caught on the L-28 thanks to a veritable […]