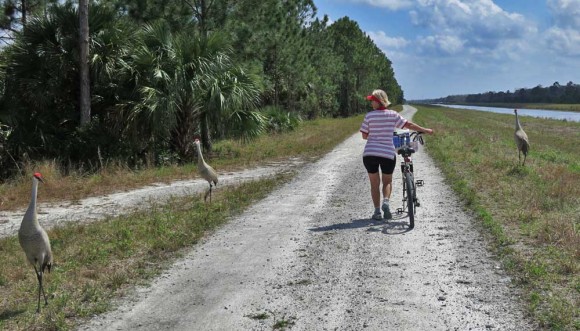 The Bluegill Bike Trail follows a levee along the C-18 canal and passes through a place popular in winter with sandhill cranes. (Photo: David Blasco)

If South Florida had enough safe, scenic spots to bike, I wouldn’t have tried biking on the many levees that run along South Florida’s canals, its man-made system of plumbing.

Alas, however, I am always searching for places near my Fort Lauderdale home where I can ride without sharing lanes with South Florida’s angry and distracted drivers. The Bluegill Trail, as you’ll see described below, is the best levee trail I’ve found.

Several levees on the border of the Everglades have been repurposed as biking and hiking trails. Few are paved. They are generally hard-packed shell rock that skinny tires can handle, but are perhaps safer on fat tires. 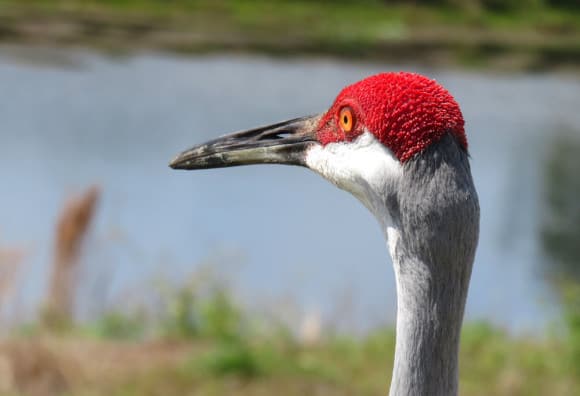 Our levee trails often run along massive highways, so that the drone of traffic is ever present and the road is part of the view.  They frequently have minimal and unchanging scenery – vast fields of sawgrass – and only so-so wildlife sightings. They lack any shade and can be brutal in the heat.

But these trails have no vehicle traffic, few bicyclists and, on the right day, can be a fun challenge, with the occasional surprise the natural world likes to present.

The scenery doesn’t change much, so these rides can be a little boring. But in overbuilt South Florida, levee trails can offer a good day of bicycling. 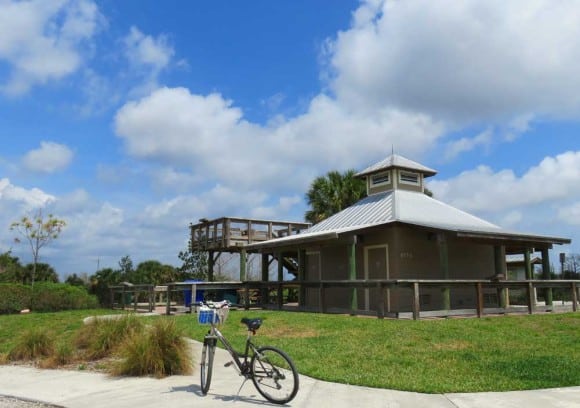 This levee trail begins on PGA Boulevard at the end of the developed part of Palm Beach Gardens, and leads through the Loxahatchee Slough to Riverbend Park in Jupiter. It’s a 10-mile round-trip, and there are appealing extensions at each end.

The trailhead on PGA Boulevard is called Sandhill Crane Access Park (and for a good reason.) It’s a great trailhead: There are good restrooms, a few picnic tables, an overlook, a boat dock and parking.  (No potable water, however, so bring plenty of your own.)

That’s not the only reason this is the best of the levee trails. The Bluegill Trail, which follows the C-18 Canal, has no roadway nearby, so it is all quiet. And there are some scenic sections on the eastern (non-canal) side of the trail, where you overlook a lovely cypress slough.

The highlight for my March ride were the sandhill cranes. I saw between two and five cranes on at least five occasion, including a mom, dad and tiny fuzzy colt.

I also was thrilled to see a swallow-tail kite swooping over the canal as well as other wading birds and a gator. My husband and I had picked a steamy, sunny day, but except for that, we considered the trail a nice option.

After five miles of pedaling, Riverbend Park makes a great half-way point because it is shady, with picnic tables and restrooms. The park has 10 miles of looping trails, so those who want to ride more than 10 miles can meander around the park. There are grand old oak trees, views of the Loxahatchee River and a historic battleground, so it’s a fun place to explore. Here are Florida Rambler tips on visiting to Riverbend Park. 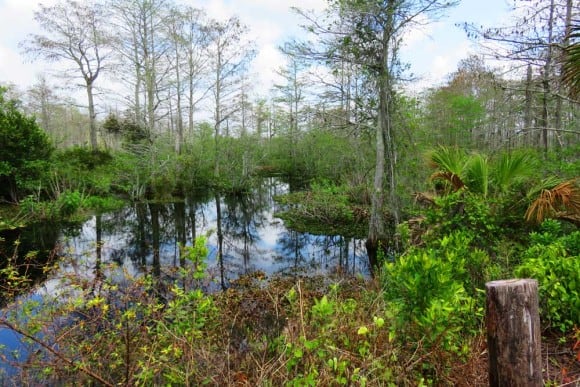 To extend your bike trail on the PGA Boulevard end, ride east on a landscaped, paved trail that extends on the north side of PGA Boulevard and then cross at the light at Ryder Cup Boulevard. A bike trail winds past posh homes and lush greens along that road to Northlake Boulevard.  This will add another seven miles onto your ride and provide a nice green contrast to the brown shades of the levee.

Eventually, the Bluegill Trail will extend all the way to Grassy Waters Preserve, another wonderful place to hike and explore. 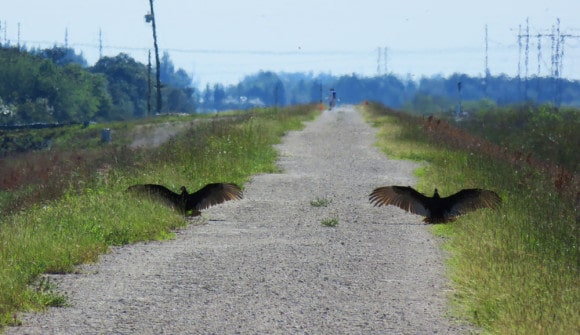 These vultures “greeted us” along the levee bike trail between Lox Road and Atlantic Boulevard. (Photo: Bonnie Gross)

In Broward County, development stops abruptly in the west, where a levee controls water levels in the Everglades. There is an unpaved, hard-packed gravel recreation trail that extends for many miles.

You can start this trail at Broward’s northern border at Lox Road, where there is parking, an airboat operator and lots of fishermen.  If you ride south from here, after the first three miles, you are adjacent to the Sawgrass Expressway. It’s  8.5 miles to Atlantic Boulevard.

A much quieter and more remote route starts at the end of Atlantic Boulevard, where a trail head opened in 2016.

From Atlantic, the levee extends 10 miles straight through the Everglades to US 27 – no roads, no cars, few people and, unfortunately, not a single speck of shade.

To find the trail head at the end of Atlantic Boulevard, go straight at the light on Atlantic as you go under the Sawgrass Expressway. The road curves around until you come to about 20 parking spaces, often filled with fishermen. (But no restroom facilities.)

This trail is a rocky dirt road that is pretty rough. I don’t think you’d fare well here on skinny tires. The roughness is the trail’s big weakness; you don’t get to appreciate the quiet because you’re constantly bumping and jangling as you go.

About every two miles there is a water-level measuring station and at each of these places, there’s a little bit of a walkway over a deeper pool of water. They’re the prettiest spots on the trail and if you’re lucky you might see an alligator or birds around these pools.

Other than those stops, it’s flat, straight, level and the scenery doesn’t change.

If you start from Markham Park at the end of SR 84 in Broward, you can pedal for six miles west with the vast vista of the Everglades, never crossing a road or encountering any vehicle traffic. To the north, there’s the Everglades, but to the south, it’s nothing but I-595 the whole way.

An alternative route is to ride north along the levee from Markham Park towards Atlantic Boulevard and Lox Road. The downside: Scary warnings about a gun range nearby.

Here’s a complete report on biking the levee from Markham Park.

Here are my favorite bicycle trails in South Florida and beyond.