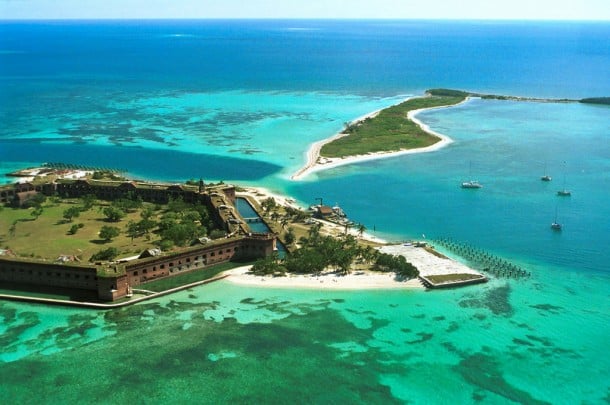 ~ I’ve been to Fort Jefferson twice, both times on fishing expeditions but not to camp. We did our “camping” in the fishing boat as it sat on the reefs off the Dry Tortugas. Those were marathon fishing trips – 4-5 days – and you caught a wink whenever you could on the boat.

The big downside on those trips was the water rationing, so showers were scarce – and the stopover for a swim at Fort Jefferson before returning to Key West was a most welcome relief. 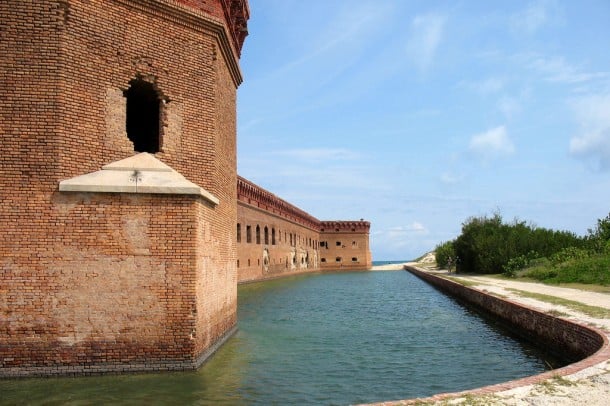 The moat (Photo by Peter Elmon)

Fort Jeff, as it’s affectionately called, sits on an island in the Dry Tortugas chain about 70 miles west of Key West. It is one of the least visited of our national parks, and there’s good reason for that – you can only reach the islands by boat or by air.

But it’s worth the effort.

“Its kind of incredible to get out there in the middle of nowhere, and there’s this giant fort,” said Pia Christensen, who was married on the island in 2001.

For Pia and her family, Fort Jefferson is a special place.  It’s where her mother, the grand-daughter of a charter-boat captain, met her father, who worked on the island as a park ranger.

The Civil War and a famous prisoner

Fort Jefferson was built before the Civil War on Garden Key, one of seven islands that make up the Dry Tortugas chain. At first, it was seen as an ideal defensive position to guard the shipping lanes that served the Gulf Coast of the U.S.  Garden Key was already home to a lighthouse to mark the lanes and provide mariners a reference point around and through nearby reefs. 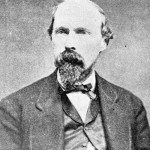 The fort was built to withstand heavy guns, and it was designed to dish it back with 410 cannons mounted in open casements on three levels. Inside the fort, living quarters for soldiers, civilian tradesmen and slaves were built.

At its peak during the Civil War, the fort’s military population exceeded 1,700 soldiers, a Union outpost that also took on military prisoners, mostly deserters, who replaced the slaves as construction continued.

After the war, civilian prisoners were brought there, most notably Dr. Samuel Mudd, who was convicted of conspiracy in the assassination of President Abraham Lincoln for treating assassin John Wilkes Booth for a broken leg after Lincoln was murdered at Ford’s Theater. Mudd was later pardoned, but not before he was incarcerated on the island for four years.

By the end of the 19th Century, the military all but abandoned the fort.  Today, it is populated by a handful of park rangers, and a steady, if sometimes sparse, flow of visitors from Key West. 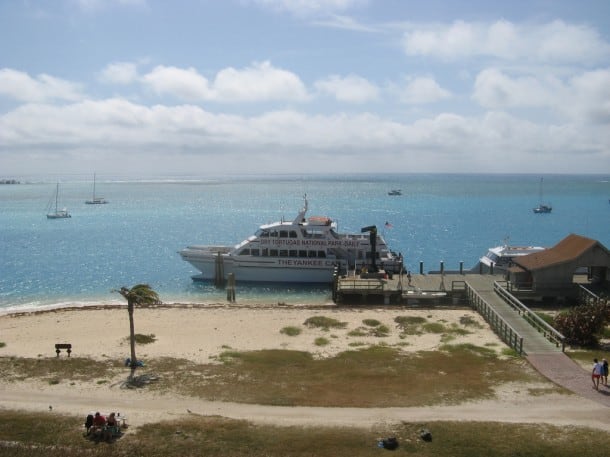 Park service ferry at the dock 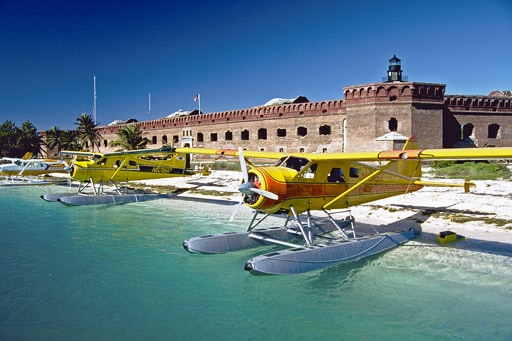 Seaplane on the beach at Fort Jefferson

Most people travel by ferry, the Yankee Freedom II, which runs daily excursions from Key West, a 2 1/2 hour trip that allows day visitors a little over four hours on the island before returning another 2 1/2  hours to Key West.

The day trip includes a continental breakfast, sandwich buffet lunch, 40-minute tour of Fort Jefferson; and complimentary snorkeling gear. (You may bring your own gear, if you prefer). Drinks, including beer, wine and liquor, are available on board.

If you are going to all that trouble to get out there, it makes a whole lot of sense to bring your camping gear and kayaks and spend a few days exploring the islands around Fort Jeff!

When the day visitors return to Key West, campers have the island to themselves. “I remember how it got so nice and quiet after everybody left,” says Pia. “Having it quiet, and having it to yourself is really neat.” 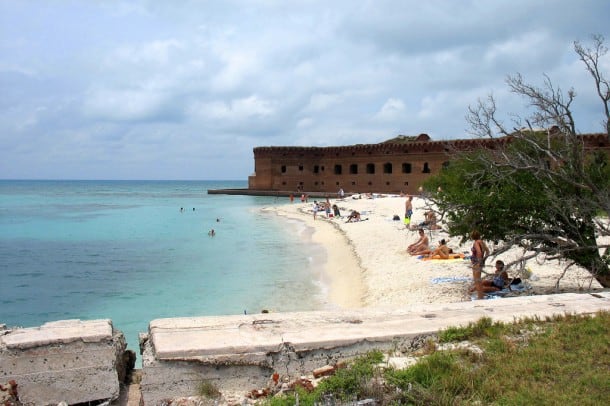 The beach near the campground at Fort Jefferson 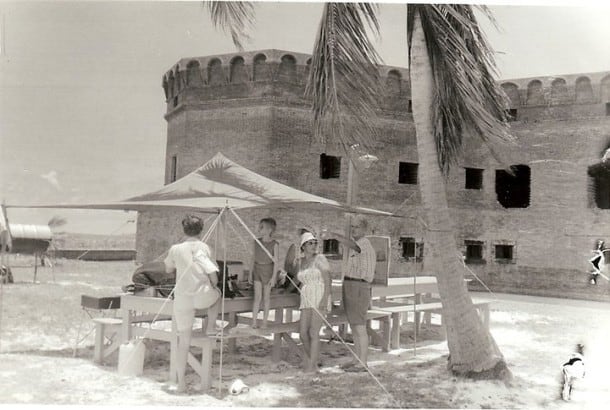 Camping at Fort Jefferson in 1961

The night sky is incredibly alive, and the only sound you hear is the gentle lap of the sea on the beach.

“It’s one of the most beautiful settings. You are right there on the beach, between beautiful blue water and the fort,” she said.

“It’s primitive, and you have to be prepared,” she said.

Florida Rambler colleague Bonnie Gross recently made this trip and wrote this article: Camping in the Dry Tortugas: So worth the effort

There is no water at Fort Jefferson, thus the “Dry” Tortugas.  You must bring your own water, and you must bring enough. There’s little shade and lots of sun, so continuous hydration is essential.

Camping is limited to three days if you arrive via the ferry, but the park service will allow you to stay a maximum of 14 days if you have your own boat.  There are only 11 campsites, and they cannot be reserved.  Sites are assigned first come, first served.  Each site contains a table and a grill, and accommodate up to three tents and six campers per site. If all the numbered sites are filled, campers are directed to an overflow area.

Passage aboard the ferry for $180 per adult, $140 per child, including camping gear. Kayaks are an additional $20 each, round trip, but the ship will only carry a total of three kayaks at a time.

Passage on the ferry does not include the $5 park fee or the modest $3 per night camping fee.

Tents, gear and supplies must be packed in tote bags or bins, and you must be able to carry your gear on board without help. All camping gear must be free standing.

Kayaks: $20 round trip, and reservations are required. Kayaks must be under 15 feet 6 inches.

Coolers must fit under the bench seats; no propane or gas fuels allowed. Bring self-starting charcoal or Sterno for cooking.

Carts are available at Fort Jefferson’s dockhouse for transporting your gear to the campground.

Things to Do in Dry Tortugas National Park 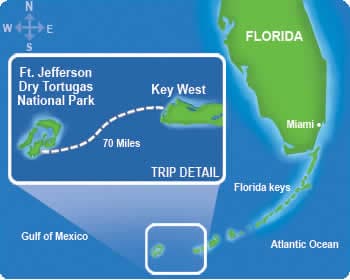 These islands sit on one of the world’s most productive fisheries, feeding a fledgling Gulf Stream as it begins its long journey into the Atlantic Ocean. As such, a large portion of the park has been set aside as a marine sanctuary, and fishing is restricted to certain areas.

Fishing is permitted only within a one-mile radius of Garden Key, the island where you will be camping, so it’s ideal for kayakers pushing off from the campground. Shore fishing on Garden Key is restricted to two areas, the dock and the shoreline immediately west of the dock.

A Florida fishing license is required, and all Florida saltwater fishing regulations apply with a few exceptions. For example, spear fishing is prohibited.

You can charter boats out of Key West and Fort Myers for overnight trips to the Tortugas, as I have at least a half-dozen times, but those vessels do not enter the park or operate under special rules for commercial vessels. 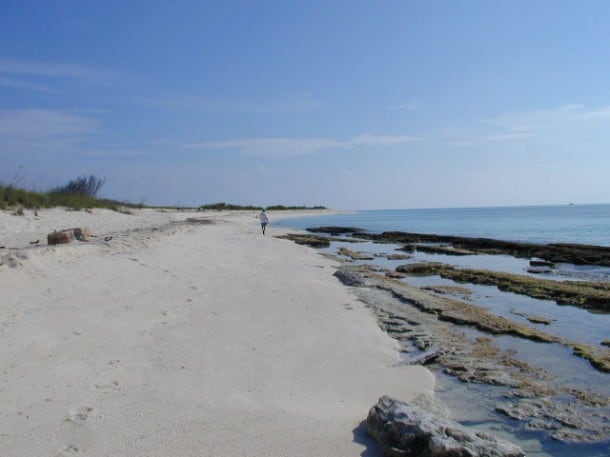 Paddle to this isolated beach on Loggerhead Key

Beyond Fort Jefferson, kayaking may be the best way to enjoy these remote islands. Within the harbor area, you can paddle to Bush Island and Long Key, although you cannot go ashore and must remain a minimum of 100 feet offshore.

More experienced kayakers can venture out into the open water to Loggerhead Key, which is the largest island in the park and where you are allowed to go ashore to enjoy pristine, unpopulated beaches.

Some of the best snorkeling in the Tortugas can also be found around Loggerhead, but you have to cross three miles of deep, open water to get there, so it’s recommended for experienced kayakers only.

All boats, including kayaks, that venture into the park’s Natural Research Area (the sanctuary) must obtain a boat permit from the rangers, including float plans so the rangers know where you will be going. The rangers will also brief you on conditions unique to these islands, including the strong currents that can carry you away and the headwinds you will encounter on return from Loggerhead.

It’s always a good idea to carry a portable VHF radio if you plan any open-water paddling. 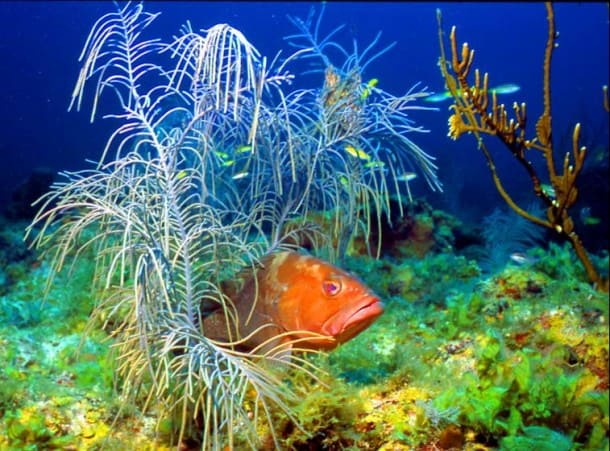 The undersea world of the Dry Tortugas

The coral reefs around Garden Key, Bush Key and Long Key are amazing, among the most colorful you will find anywhere in Florida.  Most campers can wade into this underwater wonderland right off the beaches at Garden Key.

“The water is so clear and clean, the snorkeling is fabulous,” said Pia.

Within the 46-square-mile Natural Research Area surrounding Garden Key, you will find an abundance of undisturbed undersea life, including endangered Elkhorn and staghorn coral.

Boats, including kayaks, are not allowed to anchor anywhere, and all forms of fishing are prohibited outside the one-mile-radius Garden Key zone within the NRA.

If you prefer not to go it alone, day trips for diving, snorkeling and fishing are offered on several charter boats that operate out of Key West. 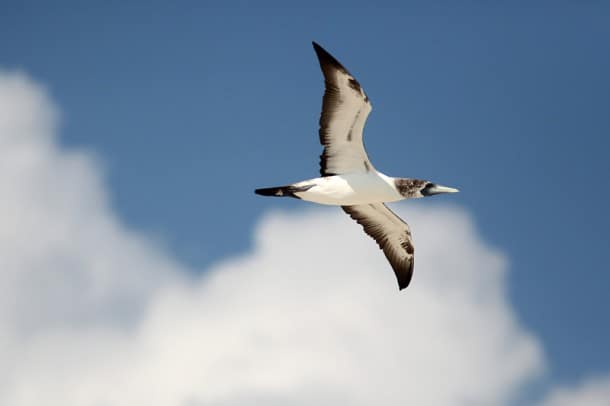 Between March and September, an estimated 100,000 sooty terns will nest on the islands of the Dry Tortugas. In fact, Bush Key is the only regular nesting site for the sooty tern in the entire United States.

Overall, the islands’ bird list contains 299 species, though fewer than 40 species nest here in winter and only seven species nest during summer.

Most of the other species are migrating to and from Cuba and other areas of the Caribbean.

The peak spring migration occurs during April and May, although it starts as early as February, with more than 200 species passing through – dropping into the islands for protection when the weather kicks up.

Camping at Dry Tortugas National Park: So worth the effort

Best Florida Keys beaches, even some you don’t know

Paradise Found: Things to do in the Lower Keys

Visit our full archive of stories about the Florida Keys

Hello! Can you please let me know some good places to charter the boat to camp at Dry Tortugas?

There is a ferry that runs out to the Tortugas from Key West. The Yankee Freedom.