A brewery tour of the Florida Keys 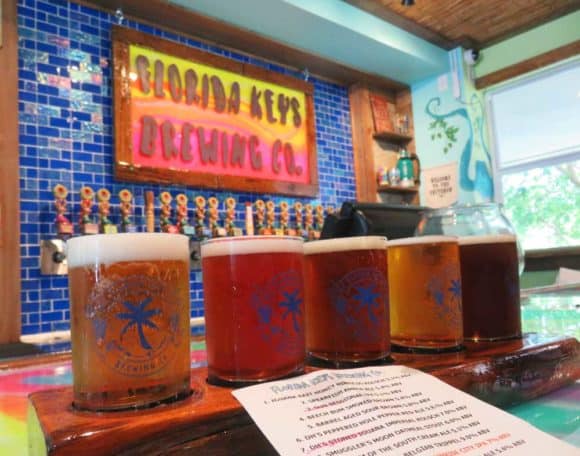 Jimmy Buffett songs and pop culture suggest that when you visit the Florida Keys, you should drink a margarita.

But anybody who has spent a salty, sun-soaked day in the Keys knows that the real beverage for the Keys is a thirst-quenching beer.

No surprise, then, that Florida Keys breweries have sprouted from the Upper Keys down to Key West.

On our recent trip through the Keys, however, we didn’t care.

It was fun to sample a few beers in these atmospheric breweries, each of which offered an ambiance that captures the Keys experience.

At this writing, there are four operating craft breweries – two in Islamorada mere blocks apart – and two breweries in Key West, each in a unique location. (There are also a few restaurants that serve their own beer, which we have not included here.) 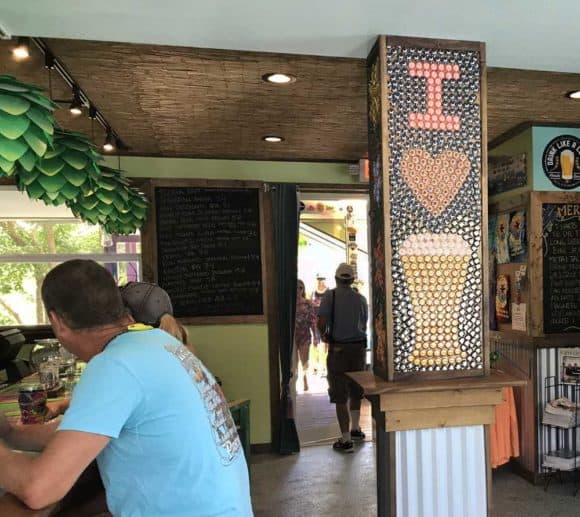 The oldest of the two Islamorada breweries first opened in a warehouse a few blocks off the Overseas Highway. With popularity and success, it moved its tasting room in Spring 2018 to a new location on the Overseas Highway, where it will snag more drive-by visitors.

The new space features one of my favorite things about the Florida Keys Brewing Company – décor created by making mosaics out of thousands of beer bottle caps.

One advantage to the new location is the backyard beer garden, a lush inviting space that is child-friendly. When we visited, kids and adults were trying out the hula hoops. The tasting room has a wide choice of games and the atmosphere is friendly and fun.

This brewery has cultivated the patronage of locals and one sign of that is the busy schedule of events that take place here, from a book club to yoga classes. Live music is performed two or three times a week. The second craft brewer to open in Islamorada, this place devotes about half its space to displaying T-shirts and logo merchandise and for a sand-pit and boat where kids have a blast.

That leaves room for a half dozen tables and a bar in the tasting room, where we saw friendly tourists and locals chatting about places to go in the Keys. 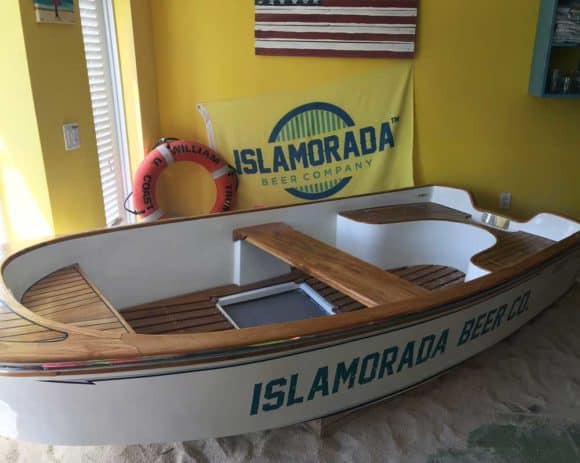 In an adjoining space in the same building, you’ll find Islamorada Distilling, which makes rums, gin and vodka, sure to become a popular Keys souvenir.

Among their highest rated beers is Channel Marker IPA and Sandbar Sunday, which you will find on tap in many Keys locations. 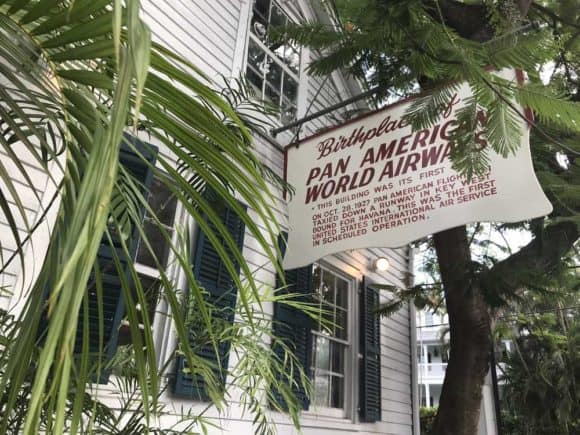 One of the Key West breweries, First Flight, is located in the historic Pan Am building in Key West. (Photo: Bonnie Gross)

This brewery and restaurant occupies a lovingly restored historic building that was home to Pan American Airways when it began service in 1927 with its first flight to Havana. For aviation buffs, there is much to love about this place – Pan Am memorabilia decorating the space, ceiling fans in the shape of an airplane’s radial engines, the illusion that a Sikorsky seaplane has plunged through the ceiling.

The original owner of the place was movie star Kelly McGillis, who opened Kelly’s Caribbean Bar Grill and Brewery. The restaurant has changed hands and been renamed First Flight, but it continues brewing and serving three beers in its classy bar and outdoor beer garden.

This was the first of the the Florida Keys breweries and ranks as the southernmost micro-brewery in America. But beer lovers do gripe about the limited choice of beers – it’s pretty rare for a brewery to have only three choices. The Havana Red Amber Ale gets a slightly higher rating than the others, though they all end up in the mid-range on beer-rating sites.

The food gets good reviews, but what we loved about the place was its budget-friendly happy hour.  From 4 to 6 p.m. every day, house beers are $3.50 a pint, wine is $5 a glass and there is a menu of $5 appetizers. We each ordered a couple appetizers and ended up calling it dinner. We recommend the Beef Brisket Mac and Cheese and the trio of hummus dips.

We have to return for this: At their Sunday brunch, a server dressed in a throwback Pan Am uniform offers Bloody Marys and Mimosas from an old-fashioned airline-style drink cart. 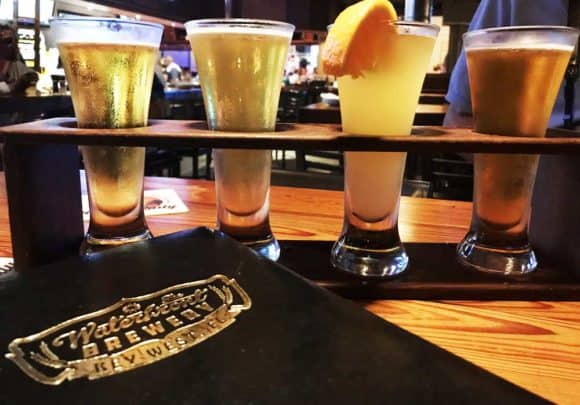 This Key West brewery has a prime location. Here’s a sampler at Waterfront Brewery in Key West (Photo: Bonnie Gross)

What a great location for a brewery.

Waterfront is also a restaurant with a full menu, full bar, and, for Key West, reasonable prices. (Example: A good Cuban sandwich with fries for $12.) 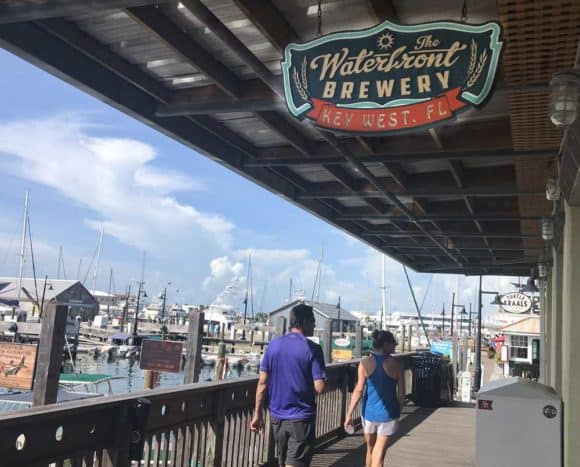 The place is huge, and offers entertainment in the form of a large game room with pool tables and video games. The restaurant occupies two levels.

When we visited, there were 10 house-brewed beer choices. Two that get higher marks on beer rating sites are Lazy Way American IPA and TruMan Double IPA.

Mile marker guide with dozens of stops to help make the most of your drive south.

12 great kayak outings in the Keys 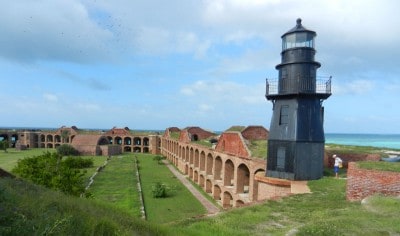 Previous
Camping at the Dry Tortugas National Park: So worth the trouble 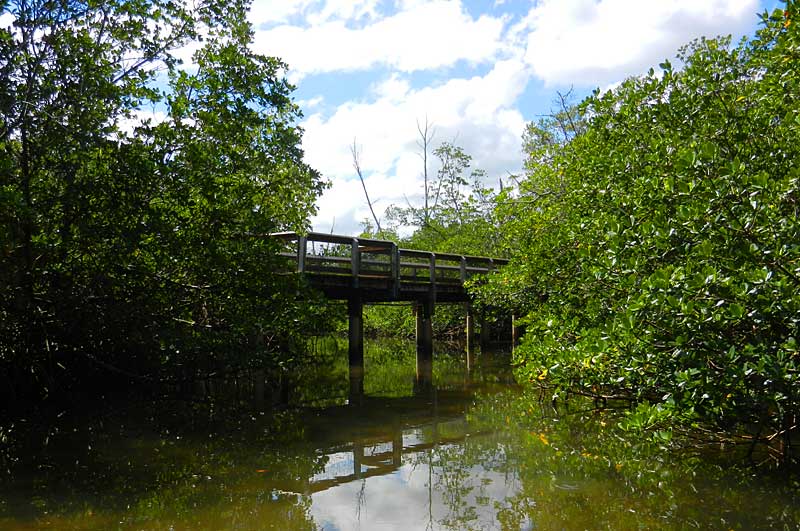