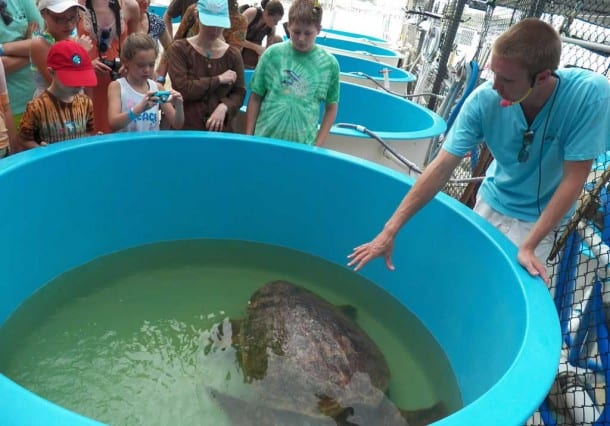 The sea turtle, one of the Florida Keys rarer residents, isn’t easy to see in the wild; if you’re very lucky you might spot one while snorkeling or kayaking.

But you can get within arm’s reach of several varieties that frequent the Keys and even toss them some food at the non-profit Marathon Turtle Hospital.

Located in a former motel on the Overseas Highway, the Turtle Hospital supports its program of rescuing and rehabilitating about 100 injured sea turtles a year through the admission price paid by visitors. A 90-minute educational tour is given several times a day, and plenty of folks take it — 40,000 a year .

The sea turtle hospital is often in the news, for example, when it helped with the rescue of 32 Kemp’s ridley sea turtles, stunned by cold in New England, which were were flown to Florida to recover and then released in the Keys.

How the Marathon Turtle Hospital got started 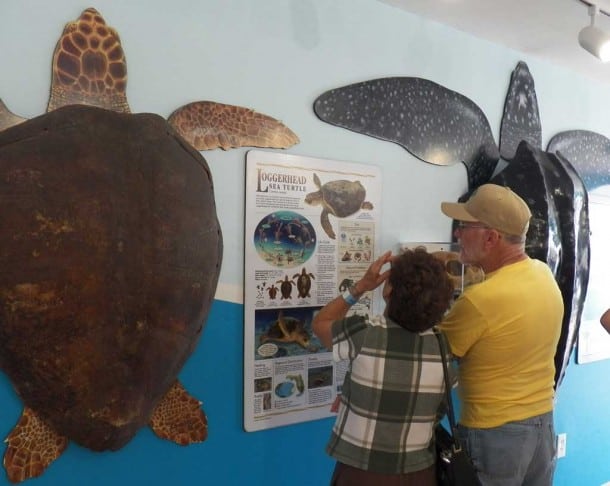 The Marathon Turtle Hospital was founded by Richie Moretti, a retired Orlando businessman who bought the 1950s-era Hidden Harbor Motel in Marathon in the 1980s. He repurposed the old salt-water swimming pool into a big aquarium stocked with local fish for guests to enjoy. In 1986, he got the required permit and took in his first two injured green turtles for rehabilitation. 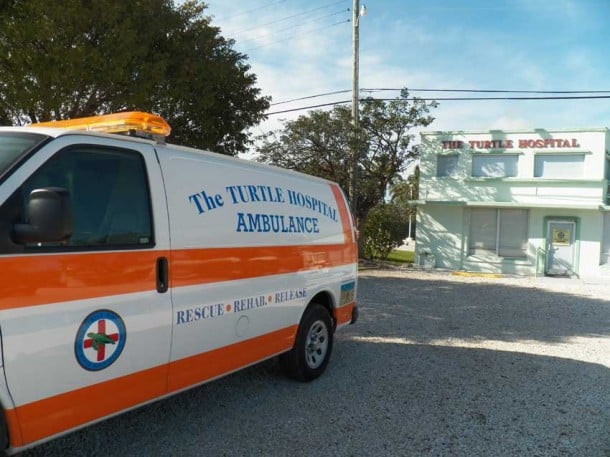 There’s even an ambulance for turtle rescues at the Marathon Turtle Hospital. (Photo: Bonnie Gross)

The need for turtle emergency care and rehab was so great that Moretti expanded his operation to include a hospital in 1992, supporting the operation with proceeds from the motel.

When Hurricane Wilma flooded the property with several feet of sea water in 1995, Moretti closed the motel, which would have required extensive repairs, and established the Turtle Hospital as a non-profit organization.  Today the motel houses staff and offices. Sign beckons visitors on U.S. 1 to the Marathon Turtle Hospital.

Over the years, the Turtle Hospital has rehabilitated and released more than 1,500 turtles, not counting hatchlings. The hospital is the world’s first state licensed veterinary hospital dedicated solely to sea turtle care. It has a full-time staff of 18 and three ambulances.

The visit begins with an educational presentation about the types of sea turtles and the challenges they face in Florida. While younger kids may squirm during the talk, the presenters keep it interesting by passing around objects (sponges, a favorite turtle food, for example) and telling stories about the individual turtles that have been rescued by the hospital. 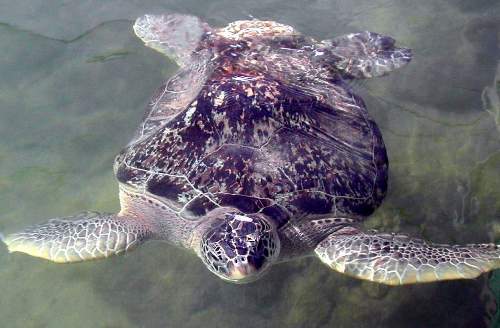 Afterwards, visitors meet some of those turtles, such as Bubble Butt, the first and longest permanent resident of the facility.  Bubble Butt was rescued on March 25, 1989, after being struck by a boat off Long Key. His shell was deformed by the strike leaving a large “bubble” on his rear, making it impossible for him to return to the wild and feed himself. At the time, experts didn’t understand why he was unable to dive. Eventually, his plight became known as “Bubble Butt Syndrome,” a condition that plagues several of the permanent residents at the turtle hospital.

A dozen or two injured sea turtles of varying types and sizes are housed in individual plastic tanks while being treated. Visitors gather around each tank and the guide tells each sea turtle’s history.

Nearby, the old salt-water swimming pool serves as turtle aquarium for permanent residents and turtles almost strong enough to be released and swim.  During the last part of the tour, visitors line the pool’s edge, hear the stories of each turtle, and are given a handful of catfish chow to throw to the waiting turtles.

No matter how much you think you know about sea turtles, if you take the tour, you won’t leave without learning something and gaining a new admiration for these threatened and endangered species.

If you’re interested in sea turtles, consider taking a night-time walk to see loggerhead turtles nest and lay eggs. Here’s a guide to turtle walks up and down the Atlantic Coast. Nesting occurs in late spring and summer.

More things to do in the Florida Keys

Special places to discover near the Turtle Hospital: