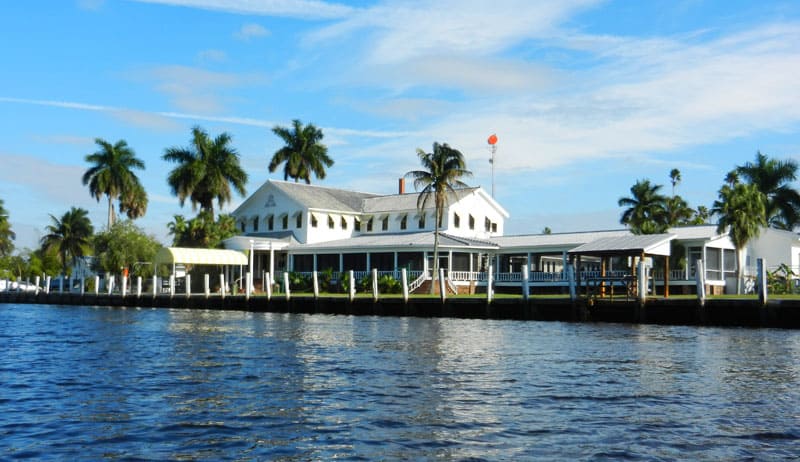 There’s only one real reason to stay at the Everglades City Rod and Gun Club: To feel like you’re stepping back in time. This relic has been hosting visitors to this small town at the end of the road since the 1890s and it is remarkably unchanged.

The Everglades Rod and Gun Club has seen more than a century of history, including five presidents and plenty of other notables, including, Ernest Hemingway and, weirdly, Mick Jagger.

I’ve always wanted to stay here, and I’m glad I did – although it’s not for the service or amenities, that’s for sure. 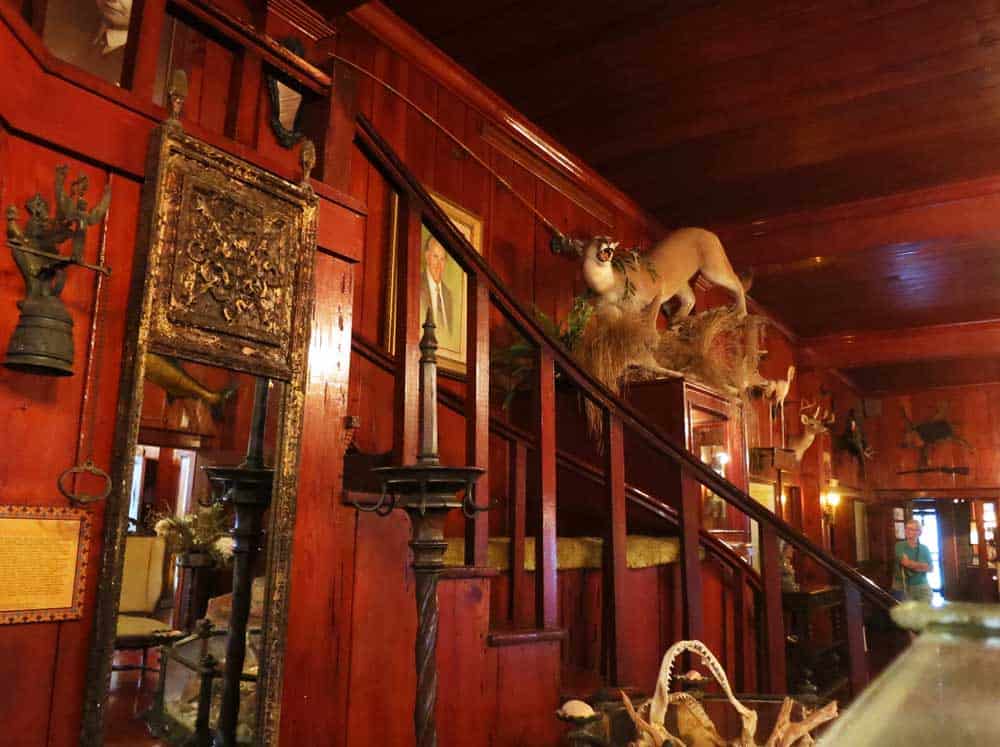 The five-acre complex, which is located on a beautiful stretch of the Barron River in the heart of this funky fishing town, has been owned by the same family since 1972.

The grand old hotel’s lobby and dining rooms are in beautiful shape – all polished wood with stuffed animals on every wall and surface, — alligators, a panther, an otter, deer, all kinds of fish, even a sad looking flamingo.

The reception desk has an antique cash register right next to the curving wooden staircase to the upstairs rooms. Tucked into the curving stairway is a beautiful old wooden phone booth. 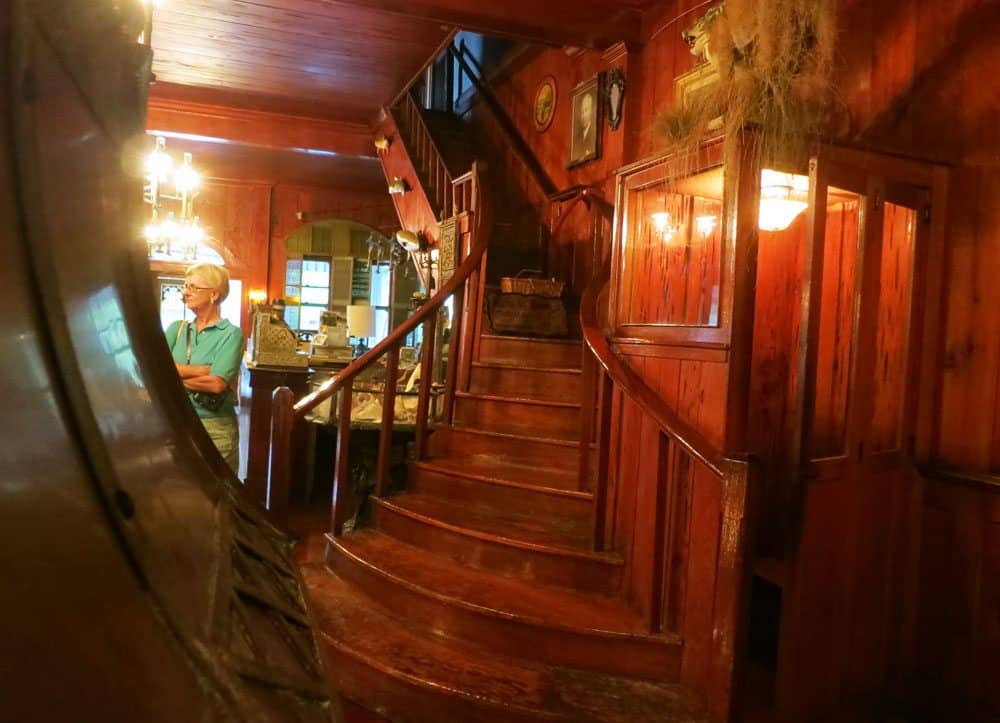 The original rooms are no longer rented because they are not up to date. There are 17 rooms for rent in cottages on the grounds, however, and they’re air conditioned and offer modern bathrooms.

All the atmosphere and ambiance of the place is in the lobby, restaurant and bar area of the hotel – and there’s plenty of authentic feeling history to the Everglades City Rod and Gun Club. 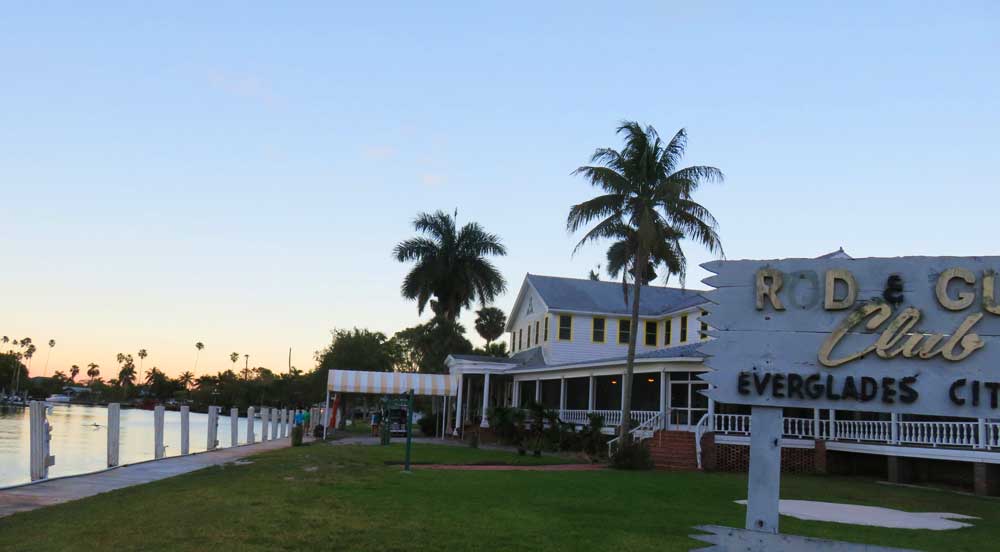 Would I recommend you stay here? Well, I travel with my husband, David Blasco, and in this case, you’ll get a different answer from each of us.

She says: The stay here was pretty disappointing.

She says: We had to wait a half hour for someone to show up at the front desk to check us in. We didn’t come at an oddball time. It was 6 p.m.

He says: On the counter was a legitimate, authentic brass bell that you pushed to make a big ding to summon service. No one came. But you see my point. That bell.

She says: The cottages were comfortable and attractive, but the bathroom had no shampoo or hair dryer and the room had no coffee maker. These are all things you come to expect even at a Motel 6. And the room was $154. And they don’t take credit cards. 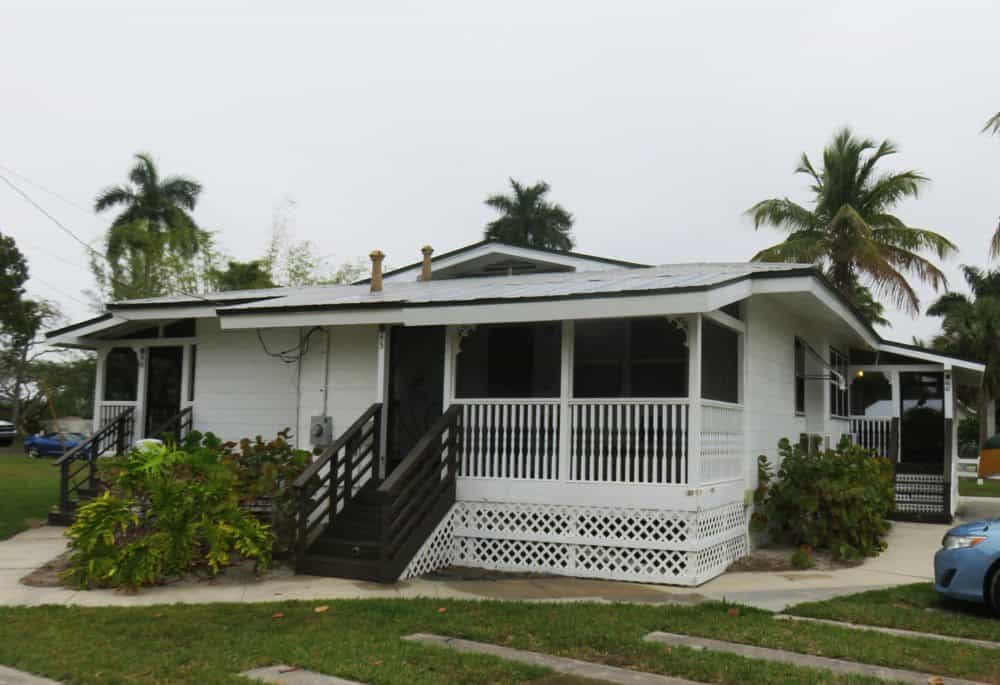 All rooms at the Everglades City Rod and Gun Club are in the cabins on the grounds. (Photo: Bonnie Gross)

He says: The attractive little cabins had a wide screen porch with chairs that would’ve been splendid places to sit on a rainy day or to enjoy a glass of wine at sunset. I’m as much a fan of comfort as Bonnie is, so when she went to open the windows for the evening I pointed out that no-see-ums are no respecters of screens. I insisted we turn on the air conditioning, and it worked. Never mind the cabins, the lodge is what you’re there to see; you just sleep in the cabins.

She says:  If you’re there to see the lodge, then wouldn’t you expect to be able to see it in the morning by daylight? We came back after breakfast (which is not served in the lodge dining room), intending to take some photos of the beautiful lobby and read all the wonderful historic press clippings collected on one of the walls. And the door to the lodge had a sign: “Closed.”  Apparently, the lobby doesn’t reopen until lunch is served in the dining room.

He says: Yes, stay there while you can.

She says (and yes, I get the last word): It’s an OK place to stay if you set your expectations correctly. But you can accomplish the main goal by getting a drink in the bar (there is one off the swimming pool) and walking around the lobby, soaking it all in. 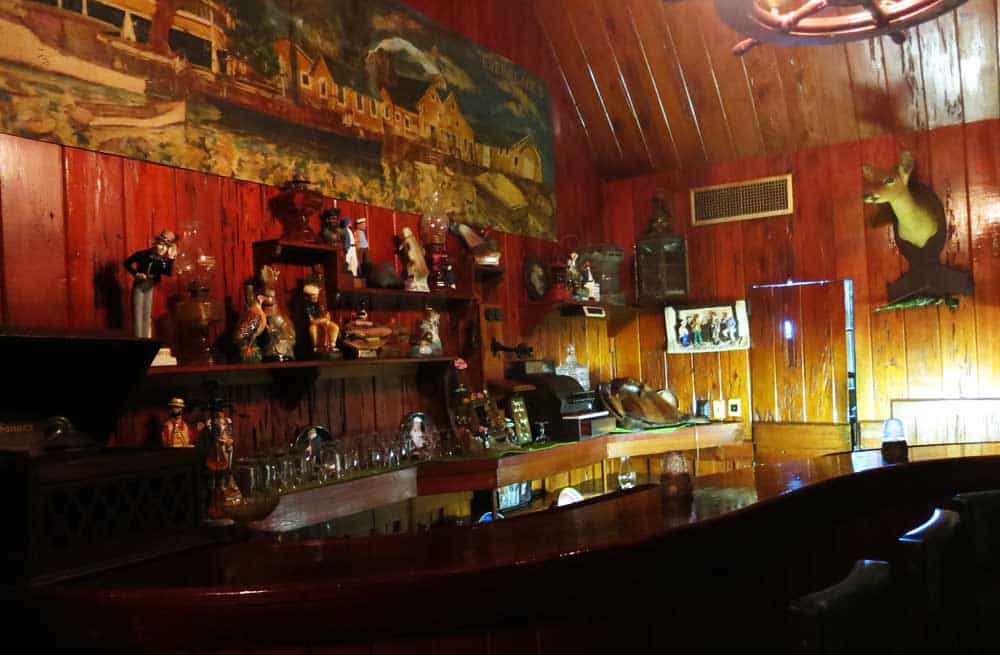 The pecky cypress bar off the lobby of the Everglades City Rod and Gun Club wasn’t open for business, but we brought our drink in there to enjoy its ambiance anyway. (Photo: David Blasco)

We took a drink into the lobby and found a beautiful old pecky-cypress bar where bar service was not being offered. It’s a gem. (When we went to the Museum of the Everglades, we saw a picture of the bar from its heyday; it looks exactly the same.)

Find a way to spend some time in the lobby and you’ve experienced the best the Rod and Gun Club has to offer, even if you don’t stay overnight.

A good alternative would be to have lunch or dinner in the beautiful dining room. Most people eat on the expansive screened porch overlooking the river. 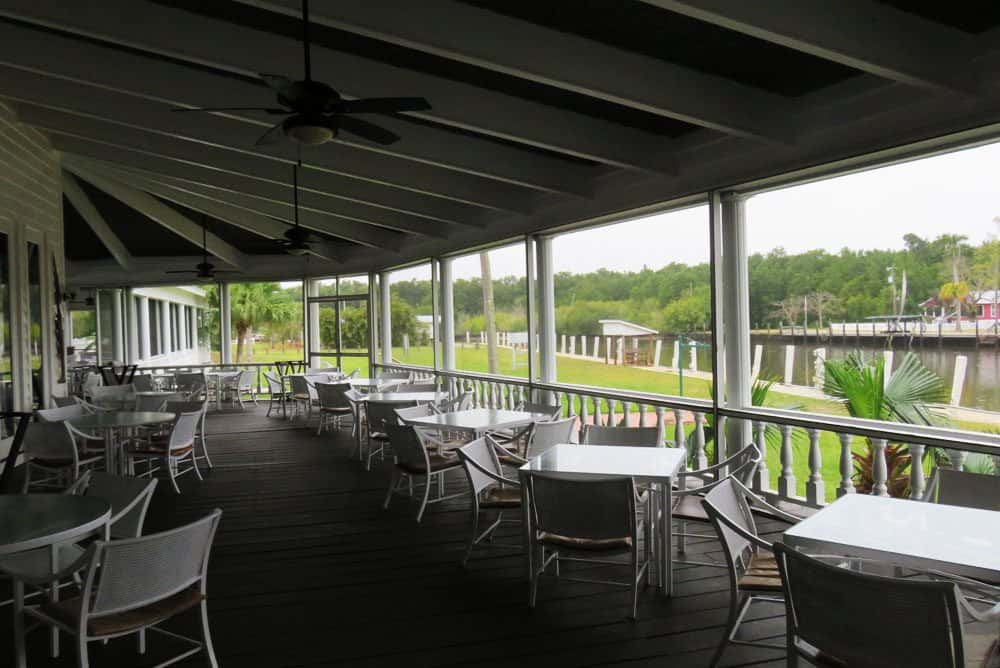 The Everglades City Rod and Gun Club has a large screened porch off the dining room. (Photo: Bonnie Gross)

Reviews of the restaurant suggest that its greatest asset is the atmosphere and history, not the food. (Oddly, the staff member who checked us in didn’t push it. She suggested we dine at the nearby Island Café for “the best burgers in town.” We did.) 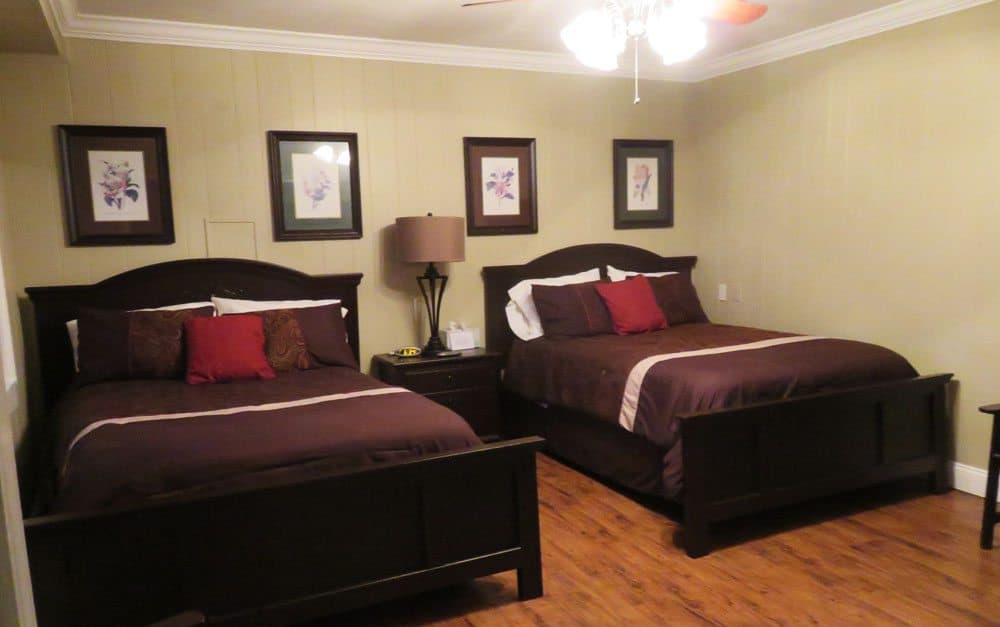 The cabins at Everglades City Rod and Gun Club are comfortable hotel rooms (no kitchens; not even in-room coffee makers.) (Photo: Bonnie Gross)

The dining room once was, however, a top place on the Gulf Coast to dine. When Everglades National Park opened in 1947, the celebratory luncheon with President Harry S Truman took place here. The menu, which is on display at the Museum of the Everglades, shows they served the Florida classics, including stone crabs, hearts of palm salad and key lime pie. 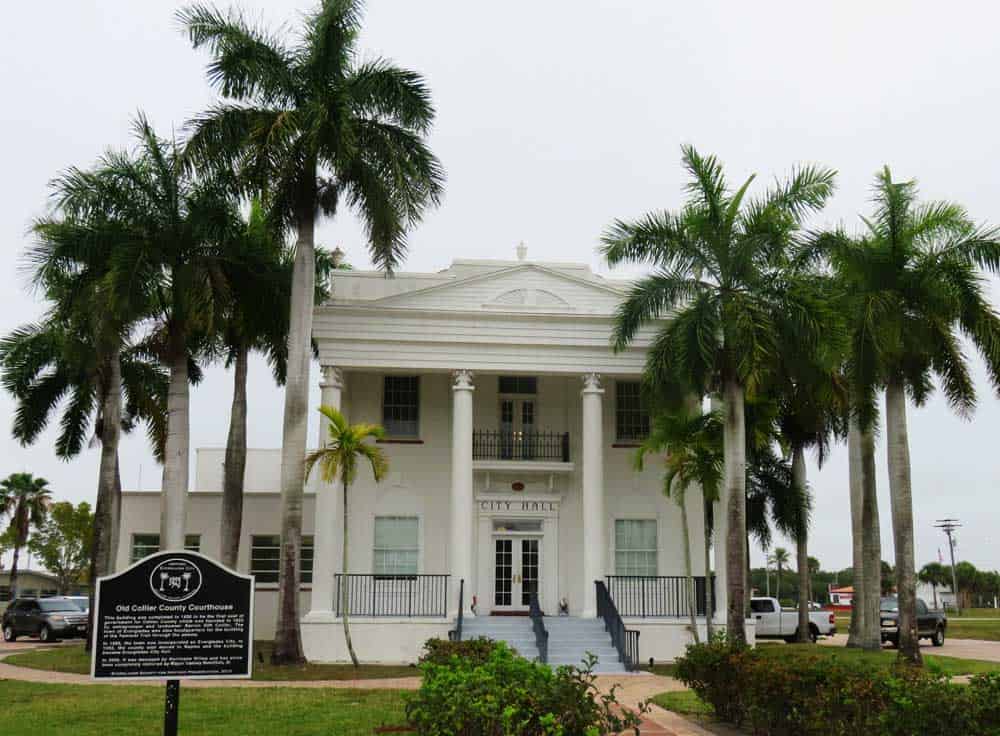 Everglades City was built around a circular road, with the Run and Gun Club on one side and this neo-classical city hall (formerly the county building) on another. (Photo: Bonnie Gross)

Barron Collier built Everglades City as a company town to serve as the hub for construction of the Tamiami Trail, the first road across South Florida.

Collier made his money with a brilliant observation. All these newly urbanized people were riding streetcars in the city, and this was a great place to put advertising. With a fortune earned this way, he bought a million acres of Florida land and built a road across the untamed Everglades, something many thought couldn’t be done. In exchange for that, he got the county named after him with a county seat in Everglades City, which was HIS town. 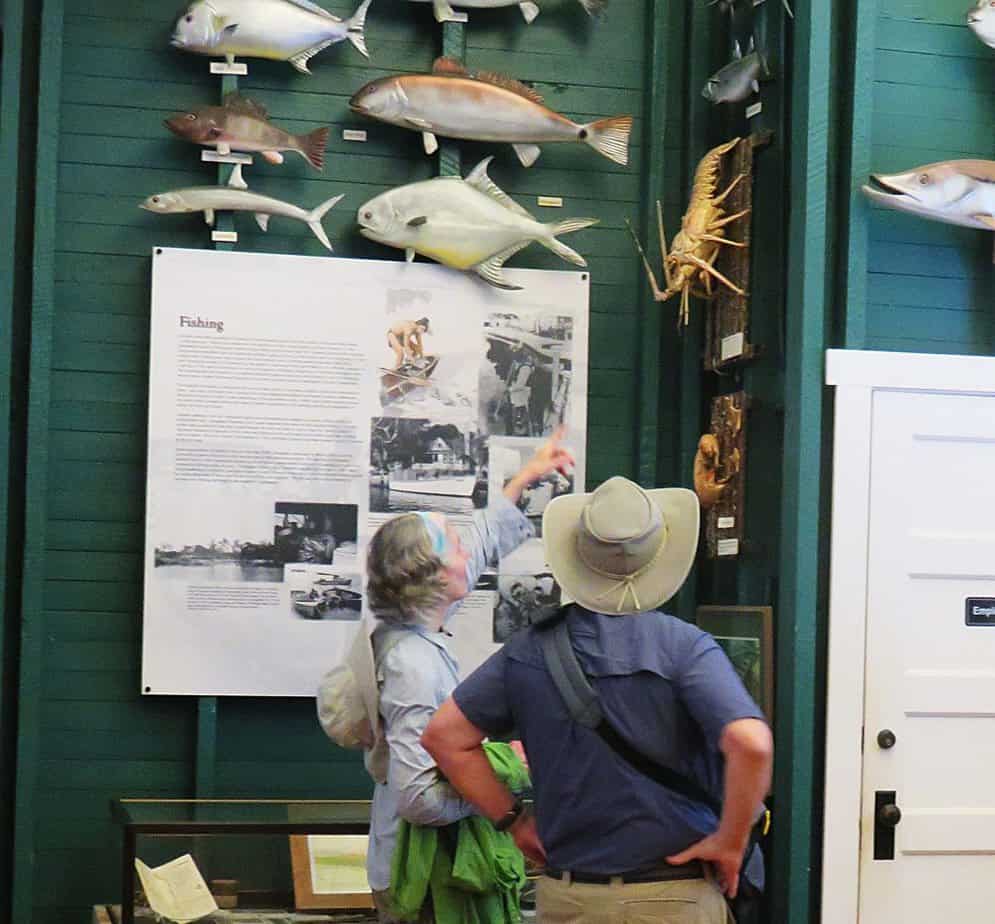 The well-done Museum of the Everglades is free. It’s located in what was a laundry building. (Photo: Bonnie Gross)

Collier established the Rod and Gun Club in 1922 by adding on to a residence that had served as an inn since the 1890s. It was a classy spot, befitting Collier’s status and the cronies he entertained there.  And if you visit, you’ll feel  — just for a moment — like a VIP from another century.

Collier’s impact is everywhere in Everglades City. The streets around the Rod and Gun Club are filled with his historic buildings from the city’s early days. The handsome neo-classical City Hall was the original county courthouse. (It was badly damaged in 2005 in Hurricane Wilma.)

Across the traffic circle from the Rod and Gun Club is the Museum of the Everglades, a well-executed professional museum operated by Collier County – and it’s free.  It is located in what was the laundry building for Everglades City when it was the company town for the men building the Tamiami Trail.

If you walk a block or two north through the city you pass some charming houses, several  of which look like they might have been here since Collier’s day. 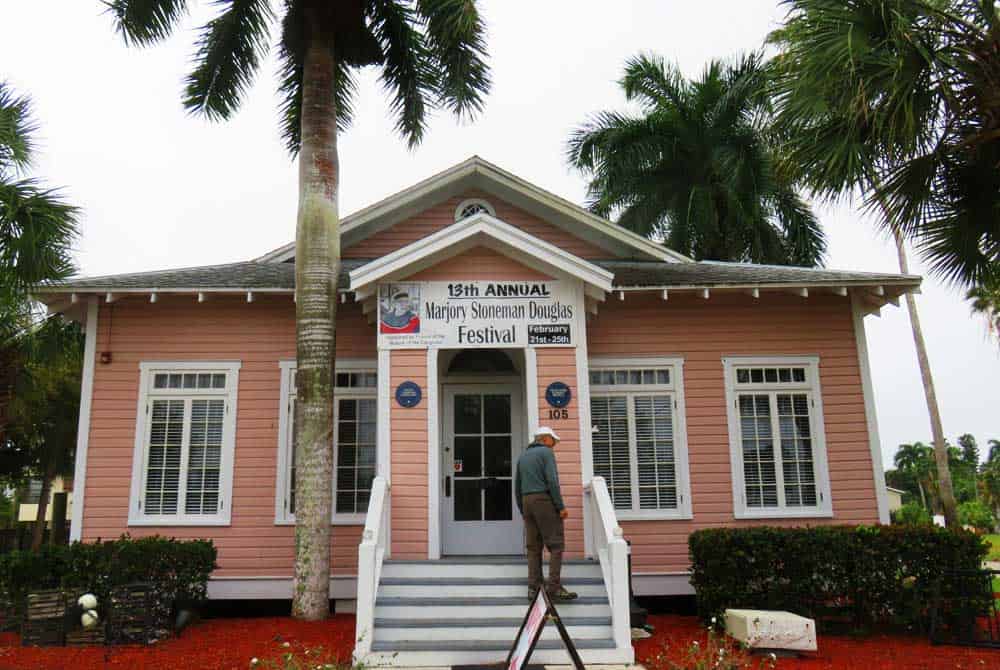 The well-done Museum of the Everglades is free. It’s located in what was a laundry building. (Photo: Bonnie Gross)

There are many open lots, the result of devastating hurricanes that walloped Everglades City every few decades. It was Hurricane Donna in 1960 that caused the bank, Collier’s company AND the county seat to move to Naples. That was the end of Everglades City’s glory days – until the 1980s.

In 1983, federal agents arrested more than 100 people from Everglades City and nearby Chokoloskee in a huge marijuana-smuggling bust. Dozens of fishermen and their boats were involved with ferrying bales of marijuana from Colombia through the maze of mangrove islands of the 10,000 Islands. Eventually, many of the accused informed on friends and many in Everglades City went to prison.

Today, like its heyday as a pioneer town,  Everglades City’s smuggling days are history. With fewer than 500 residents, it’s pretty darn quiet. The two most popular seafood restaurants in town (Triad and City Seafood) close at six. The town is far enough from metro areas that night skies are dark and full of sparkling stars.

It’s hard to picture any reason why Everglades City would ever be more than a historic town surrounded by the wilds of the Everglades.  Thank goodness. 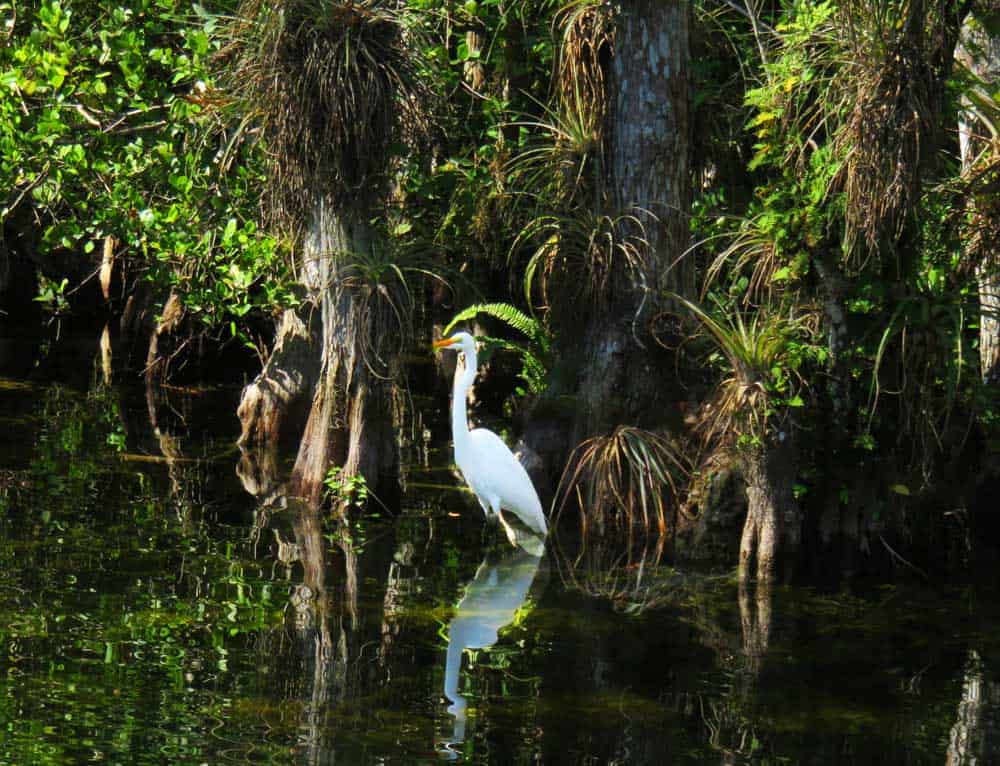 Things to do in Everglades City

We love visiting Everglades City for its proximity to so many outdoors adventures.

Hello! I have a question, not an actual comment. Would it be possible for me to "borrow" with your photo credit given, several images from the annual Everglades City Seafood Festival to include in my book that will be out in Nov 2020?