Key West has a lot of off-beat charms, but one of my favorites has always been the chickens, dubbed gypsy chickens by locals.

The feral fowl that frequent the streets and alleys of Key West seem like the perfect metaphor for Key West -– historic, colorful, sort of wild, a little noisy and occasionally annoying.

You don’t have to work hard to spot Key West chickens  —  you hear them crowing and see them strutting everywhere. The colorful roosters and the mother hens followed by lines of tiny chicks weave in and out of traffic and through outdoor cafes all over town. Key West residents call them gypsy chickens. 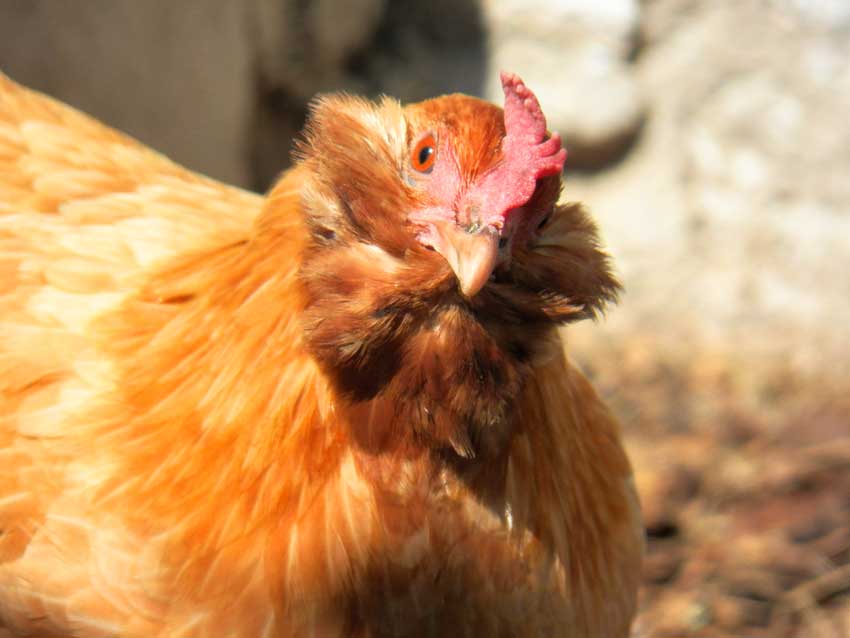 Chicken in Key West cemetery: See why I like them? Lots of personality. (Photo: Bonnie Gross)

The story behind those Key West chickens

There have always been chickens in Key West.

When people stopped the laborious process of turning live chickens into Sunday dinner many decades ago, some backyard chickens gained their freedom. Other roosters were released when cock-fighting became illegal. 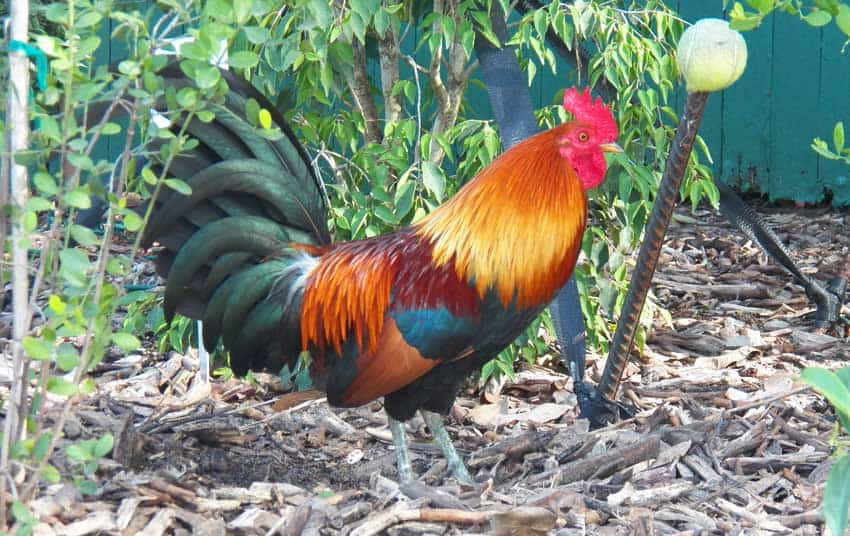 The chicken population grew so large that in 2004, Key West hired a chicken catcher to reduce the number. His work was controversial – plenty of people cherish the chickens and there were questions about what happened to those birds — and the post was discontinued that year when he quit.

The chickens may have fans, but they also have detractors.

“They crow at all hours,” explained Debbie Britten, a volunteer at the Key West Wildlife Center. “They’re like some of the people down here – they don’t know when to quit.” They also leave droppings that, when there are enough chickens, are problematic.

In January 2021, the Key West City Commission made another stab at addressing the “chicken problem” and made it illegal to feed the wild chickens. Don’t worry: the chickens have plenty of other sources of foods feasting on Florida insects.

“If this works, the chickens will actually be a lot healthier,” says Peggy Coontz, animal care director at the Key West Wildlife Center. Not only do people feed the chickens the wrong foods, when they dump quantities of feed into an area it attracts chickens from different groups, who often fight and hurt each other, she said.

Neighbors had no recourse in the past when people drove into a neighborhood, dumped food for chickens, and then left, Coontz said. It’s a practice she’s personally witnessed.

For several years, the wildlife center has had an effective Community Trapping Program that helps resolve what Coontz calls “human chicken conflict.”

To get rid of nuisance chickens, residents can borrow a trap from the wildlife center and bring the captured fowl there.  The chickens are fed and cared for, getting fat and healthy, Coontz said. (There are so many chickens in Key West that there is currently a waiting list to borrow a trap.) 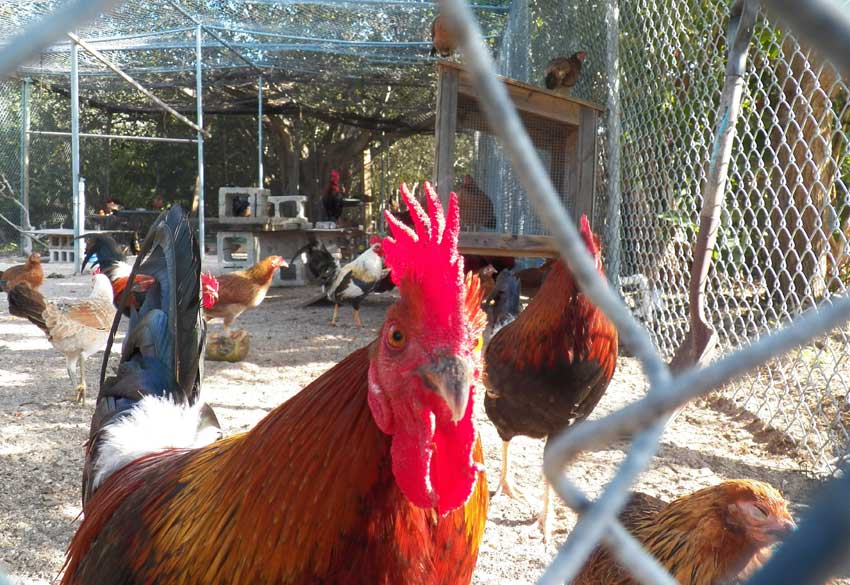 Then, when enough chickens have been gathered, they are trucked to farms and stables in central and northern Florida.

“We work hard to find them wonderful free-range homes,” Coontz said, but it’s not to chicken fanciers, who are uninterested in Key West’s feral fowl.

At organic farms, however, the Key West chickens provide natural bug control. To prevent the chickens from eating the crops, they are released into large net tubes that extend between the lines of plantings. Here, they can eat bugs and naturally fertilize the ground.

After years of controversy about what to do about Key West chickens, the program seems to be helpful. Coontz adds: “For the first time, we were able to keep both the chicken lovers and the chicken nay-sayers happy, all the while keeping the chickens’ best interest in the forefront.” 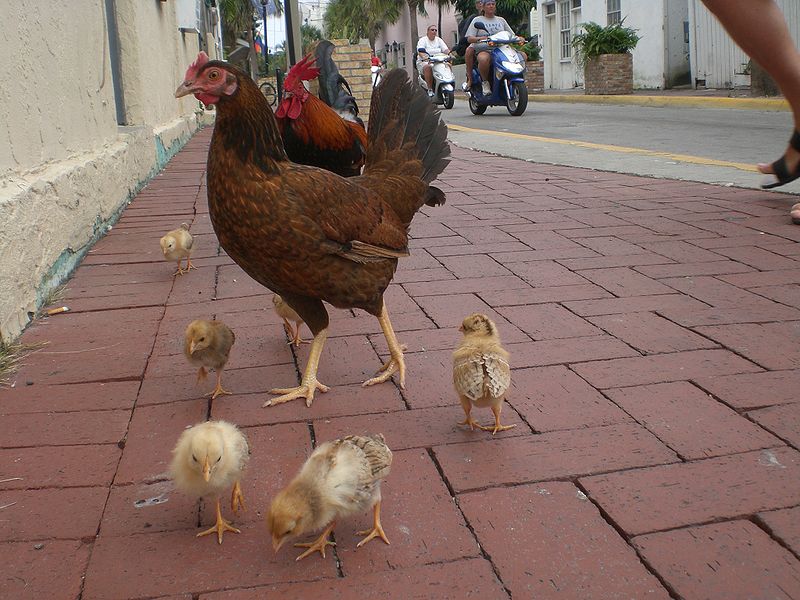 There’s more than Key West chickens at the wildlife center

If you don’t see enough chickens on the streets of Key West, you can visit the Key West Wildlife Center, where dozens are caged awaiting transport, along with a variety of injured wildlife receiving care. 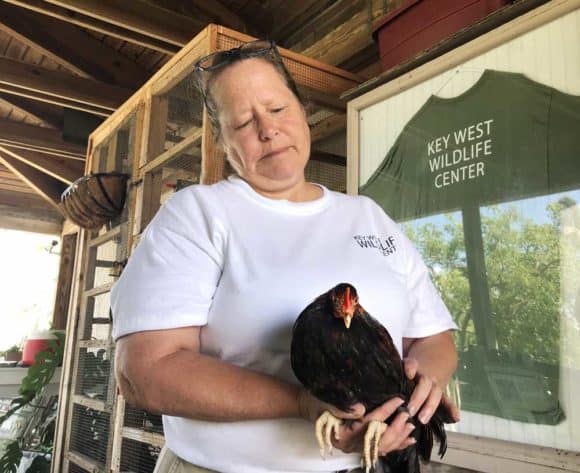 Peggy Coontz of the Key West Wildlife Center holds a sick chicken that was brought in for care. (Photo: Bonnie Gross)

It’s free and you’re likely to see hawks, pelicans, osprey, heron and egrets in and around the cages. (Some of the former patients like to hang around.)

In spring, the center cares for dozens of baby white-crowned pigeons. This threatened species found only in South Florida and the Caribbean is flourishing in Key West, Coontz said, even nesting in downtown trees and a Mallory Square parking lot. Unfortunately, when sitting on nests, the mother and father travel many miles for the fruit needed to feed their young and many are killed in the process, leaving orphaned baby pigeons.

While you’re at the wildlife center, stop by two other free attractions in Key West, which are across the street from it on the Atlantic Ocean.(Both are included in our guide to free things to do in Key West.)

Facebook page for Key West chickens: I love all the stories you see here about chicken rescue. So many chickens in distress! It also includes photos of chickens (dare I say happy chickens?) on an organic farm in Okeechobee, Florida.

More things to do in the Key West and Lower Keys

Really bad that they are everywhere even inside restaurants I Went there to work for a month and I could not even order food in a drive through restaurant even in my bend new expensive hotel they were 13 roosters waiting outside my room ! They even flight nextvto my balcony ! I am terrify of roosters and I got help from the hotel personnel every morning just to get to my car and go to work at a Doctors office all the training that I did in 1 month was a nightmare! I will never go back there ! It is such a beautiful place but no way ! I wanted to enjoy the restaurants but I could not even go !