Doug Alderson is the author of many books, a naturalist and an avid Florida outdoorsman. This is an excerpt from his new book on alligators in Florida, America’s Alligator: A Popular History of Our Most Celebrated Reptile. which is being published April 1, 2020, by Lyons Press 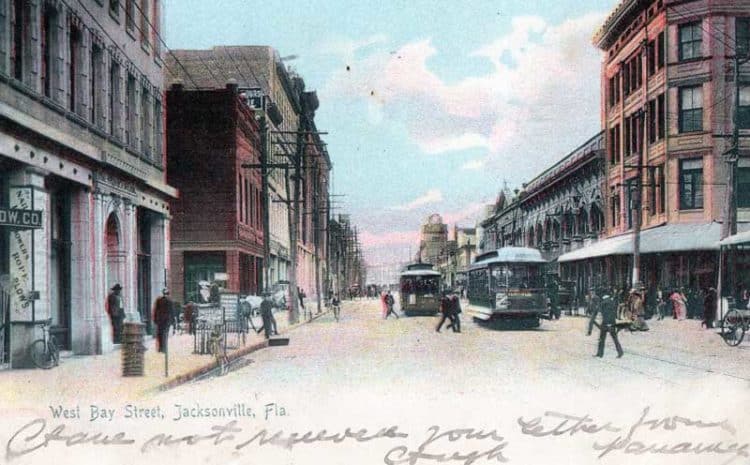 Alligators in Florida: Postcard of West Bay Street in Jacksonville, where alligator souvenirs were sold.

You are strolling down Bay Street, tipping your hat to ladies with colorful parasols and long plumes of snowy egret and roseate spoonbill feathers in their hats, when you step into a shop and find all things alligator—alligator hide suitcases, purses, billfolds, desk sets and other items.

In the next shop, a man is carving an alligator figure into the handle of an orangewood walking cane. You find display cases filled with carved alligator teeth along with alligator motifs on sterling silver spoons, letter openers, napkin rings, pipes, corkscrews and fountain pens.

There is also a store selling fine china portraying iconic Florida alligator scenes. Your mind whirls. Nothing in Connecticut has prepared you for this, and the store owners say they will gladly ship items to your home, so you pull out your money purse. When alligators in Florida were exotic souvenirs

Before the automobile age, tourists of the late 1800s and early 1900s were generally a wealthier breed who came down from northern states by train or ship. They yearned to see or hunt alligators in Florida. Alligator souvenirs, postcards and studio photographs in which they posed with stuffed alligators were mementos to take back home with them.

Most souvenirs were of high quality and priced accordingly. Jacksonville’s Bay Street, located near the St. Johns River wharf where steamers docked, was referred to as “Alligator Avenue” or “Alligator Street” because of the large number of alligator souvenirs sold there.

An 1890 census showed that more than 8,000 live alligators were purchased by visitors along with 450 pounds of alligator teeth. At least 40 townspeople made their living polishing teeth and stuffing alligators. Around this time, Jacksonville had 12 alligator dealers and 18 curio dealers who offered alligator products in their inventory. 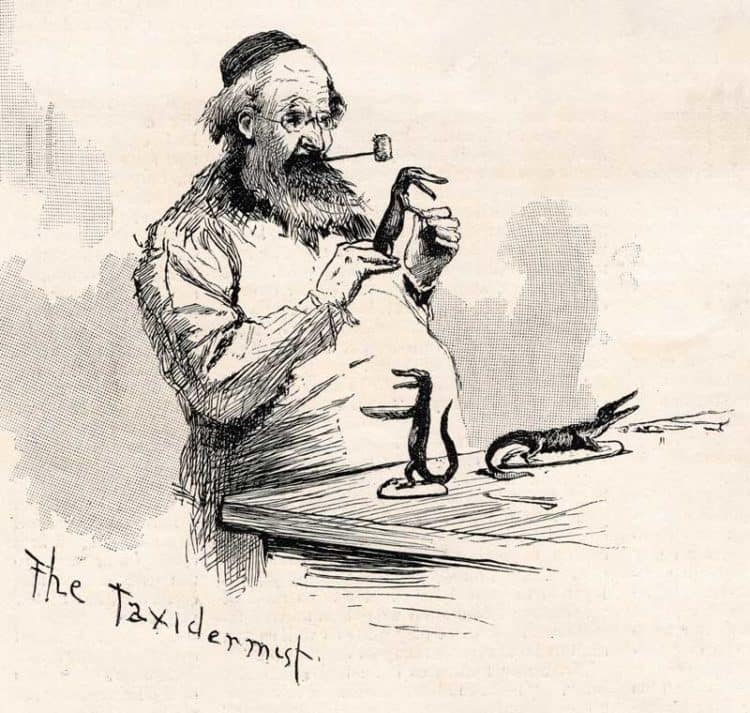 Alligators in Florida: Alligator taxidermists, as pictured in Harper’s Weekly in 1890.

While outfitting for a Florida outdoors expedition, James Henshall stated in Camping and Cruising in Florida in 1884: “I proceeded to look up my companions, and found Ben in a canemaker’s shop, intently watching the man carving alligators on the tops of orangewood canes—Ben has a penchant for canes.”

Orangewood was often the straight suckers cut and discarded from orange trees and known for the irregular knobs running down its length. River cane was often used as well with carved orangewood or some other wood attached to the top. A leading Jacksonville souvenir company at the time, Osky’s, in their 1910-1915 catalog, sold orangewood alligator handle canes for 75 cents and ivory ones for $6. Besides ivory, higher priced cane handles were made from bone and deer antlers, sometimes stained green or brown for a more authentic look. Women, children and men all carried canes during the Victorian era, so demand was high. 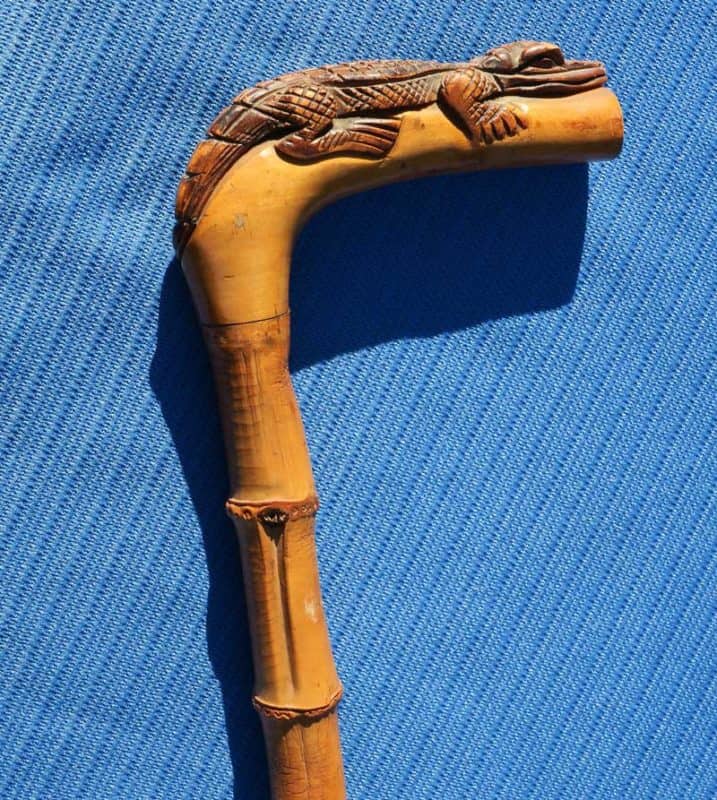 Alligator leather: Never out of style

Products made from alligator hides have enjoyed popularity through the decades. Alligator leather was used to create wallets, belts, boots, purses and suitcases. So many thousands of alligators were being killed for their hides in the late 1800s that author Kirk Munroe gave an ominous prediction: “Alligator leather is as popular today as it ever was, and it promises to continue in favor until the last of these uncouth monsters, together with the buffalo of the West and the fur seal of the North, shall have disappeared from the face of the earth.”

One Seminole trading post reported more than 10,000 alligator hides shipped to Tampa in just one summer. The American South produced an estimated 126 tons of alligator hide in 1908 alone.

Harriet Beecher Stowe, writing in 1873, portrays a colorful female tourist of the time in Palmetto Leaves: “She had provided herself with half a dozen different palmetto-hats, an orange-wood cane tipped with an alligator’s tooth, together with an assortment of cranes’ wings and pink curlews’ feathers, and talked of Florida with the assured air of a connoisseur.”

Most of Jacksonville’s specialty alligator souvenir industries dried up by the end of World War I. Alligator souvenir items were still sold in the state, however, such as those made from brass and cast iron. These included ornate thermometers, ash trays and match holders.

After World War II, travel by automobile was relatively inexpensive and the influx of tourists brought on an age of creative, mass-produced, and economical souvenirs that are still commonly seen today in gift shops and in online stores.

In Florida, flamingoes, palm trees and oranges gained in popularity as souvenir motifs, but the alligator still drew its share of attention. No one could think of Florida or other parts of the South without conjuring up images of these toothy reptiles.

Colorful souvenir tablecloths and dinner trays usually included the alligator image. Alligators adorned porcelain ashtrays, small oil lamps, salt and pepper shakers, snow globes, napkin holders and a myriad of other items, most of which were made in Japan. 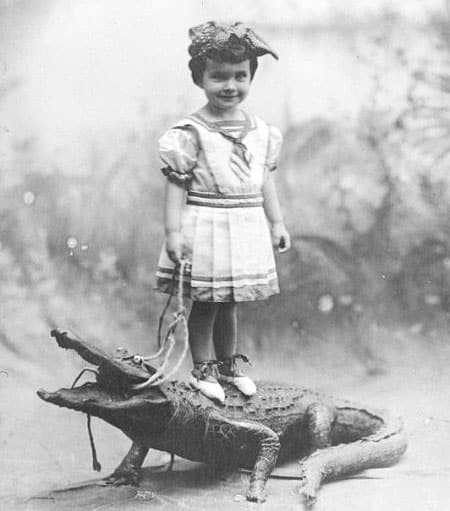 Also, live baby alligators were sold by the thousands, often overwhelming northern zoos when owners decided to donate them once size made safe housing problematic. Or, they were dumped into ditches and sewers, prompting the rise of many urban legends.

“Before long we came to a shop selling souvenirs of Florida,” wrote John W. Cowart in an essay entitled “Jacksonville’s Bay Street.”  “Live baby alligators crawled around in a glass tank on the sidewalk. As I recall, you could buy one with its tail tied to a long string on a stick to twirl around your head.”

Over several decades into the 1960s, alligators did decline in number to the point that only the strictest conservation laws and enforcement brought them back from near extinction. And while alligators are fairly common in the wild today, gone are the days of wanton alligator hunting, shooting from steam ships, and widespread poaching.

Alligator hunting is highly regulated and hunters in most states must apply for a permit and compete for a lottery. The adventure of the hunt, along with the opportunity to make money on alligator products, drives many hunters.

Whether or not the customers who purchase alligator souvenirs ever venture out on a water body to view a wild alligator, the mystique of the alligator is still front and center in today’s souvenir shops.

Reprinted with permission from America’s Alligator: A Popular History of Our Most Celebrated Reptile, 2020, by Lyons Press

Doug Alderson is the author of several award-winning Florida books, including “Wild Florida Waters” and “The Great Florida Seminole Trail.” In 2015, he was awarded the first ever Environmental Leadership Award by Paddle Florida. You can buy his books on Amazon. His latest book, “Florida Rivers: A celebration of over 40 of the Sunshine State’s Dynamic Waterways,” was published in September 2021.

Great story , always felt that alligators were killed needlessly and had a bad rap unfairly . In the 70's I did a survey in the Everglades for NOAA , mostly by boat. We encountered the gators daily. We didn't bother them and they left us alone . Today , I still camp and kayak around Florida and enjoy seeing them .

This is a fantastic historical piece. Thank you.