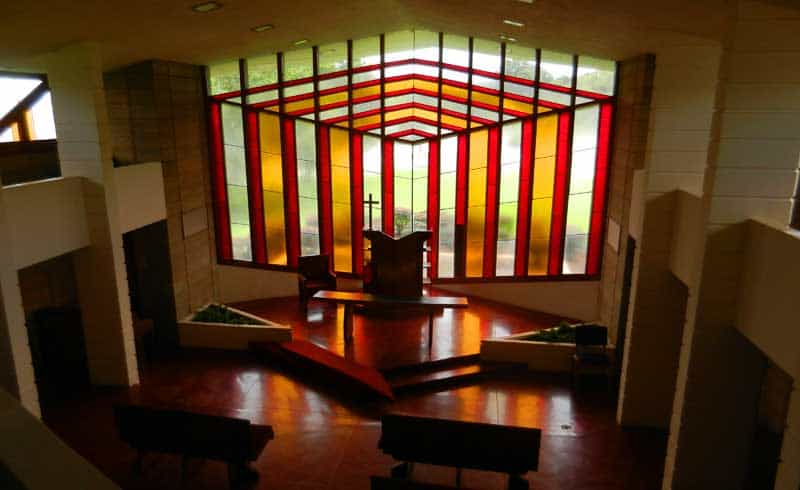 The Danforth Chapel was designed by Frank Lloyd Wright. Florida Southern College in Lakeland has 12 Wright structures on its Lakeland campus.(Photo: Bonnie Gross)

The most beautiful college campus in the country. What do you picture? Traditional brick and ivy quadrangles; a bit of New England perhaps?

That’s not how Florida Southern College in Lakeland made the top 20 list.

Its beauty comes from being different — unique, in fact: It has the largest collection of buildings on one site designed by Frank Lloyd Wright. Florida Southern College was named the most beautiful campus in Florida for 2021 in the Princeton Review based on student surveys, and has been in the top 20 for a decade. 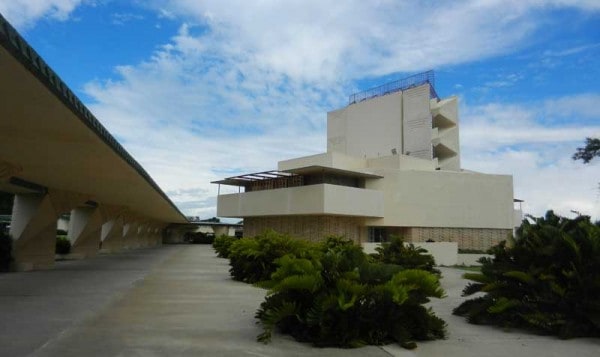 Frank Lloyd Wright Florida Southern College campus: The most striking Wright building is the tall Annie Pfeiffer Chapel, whose tower is called “the bicycle rack in the sky.” Note the Wright-designed covered walkway along the left. (Photo: Bonnie Gross)

Florida Southern College draws Frank Lloyd Wright fans from around the world, but beyond that group, it’s not a well-known destination.

Even if you don’t know a lot about architecture, however, the lovely Florida Southern campus makes an interesting stop when you’re near Lakeland.  A $5 map and brochure with a walking tour gives essential background. You can stroll the campus at your own pace and go inside three buildings. 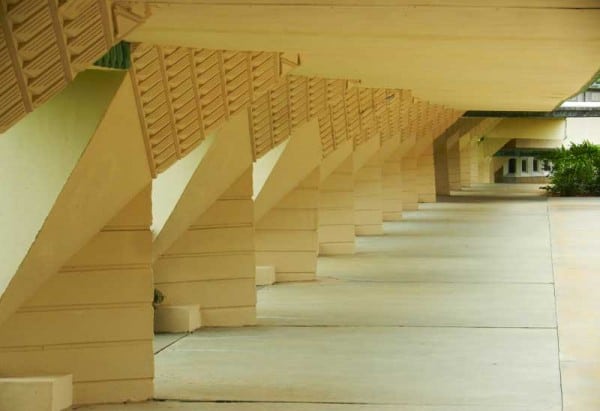 All of the buildings on the Frank Lloyd Wright Florida Southern College are connected via the Esplanade.(Photo: Bonnie Gross) 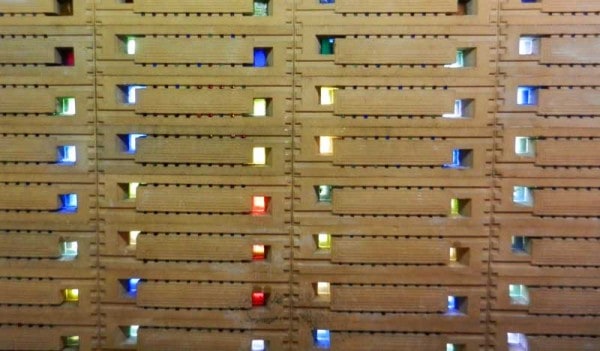 Frank Lloyd Wright Florida Southern College: The concrete block walls of Pfeiffer Chapel have small squares of colored glass embedded to create a beautiful lighting effect from inside or out. (Photo: Bonnie Gross)

Touring the works of Frank Lloyd Wright in Florida 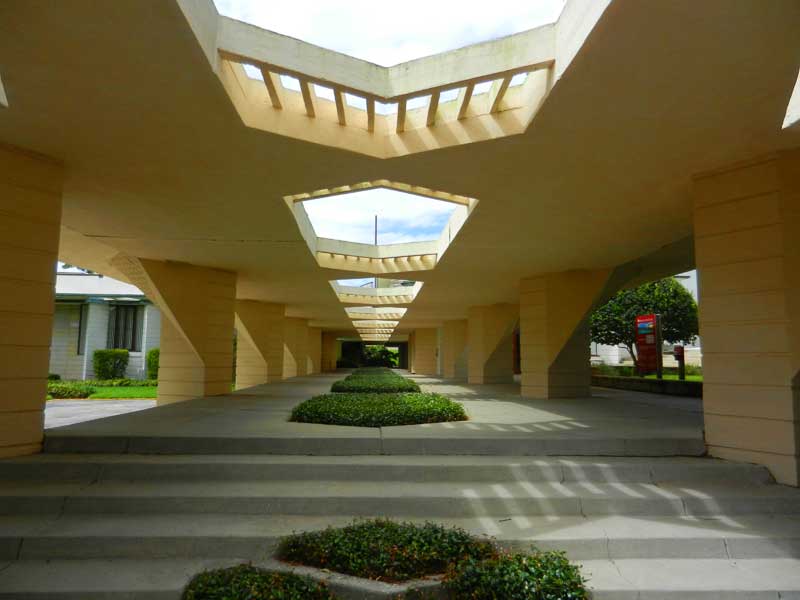 The first surprise is that in flat Florida, this campus is on a hill. The campus is built around scenic Lake Hollingsworth. The Wright-designed buildings are 80 feet above the lakeshore.

There are 12 structures designed by Frank Lloyd Wright on campus, including the Water Dome — a huge fountain — and a mile of covered walkways. Built between 1941 and 1958, many buildings are in some stage of restoration.

Along with a couple of architecture buffs from the Netherlands, we took the two-hour guided campus tour led by retired college administrator Bill Stephens.

The most striking building in the Wright-designed campus is the tall Annie Pfeiffer Chapel, whose unusual tower is called “the bicycle rack in the sky.”  My favorite was the smaller Danforth Chapel, with its orange-and-gold stained glass window. The chapel still has its original Wright-designed pews and cushions.

All of the buildings are connected via the Esplanade, the copper-trimmed covered walkway. At first, I found the walkway disconcertingly low – it’s only 6 foot 8 inches high for most of its length. But as I walked the campus, I admired the cantilevered roof lines, the patterns in the bases and especially the areas where Wright cut away roof windows to frame views of the Florida sky.

Our guided tour told the back story on how Wright was enticed to Central Florida (the college president played to Wright’s enormous ego) and how, despite the Great Depression and World War II, a Methodist college with no endowment could afford to build these structures. 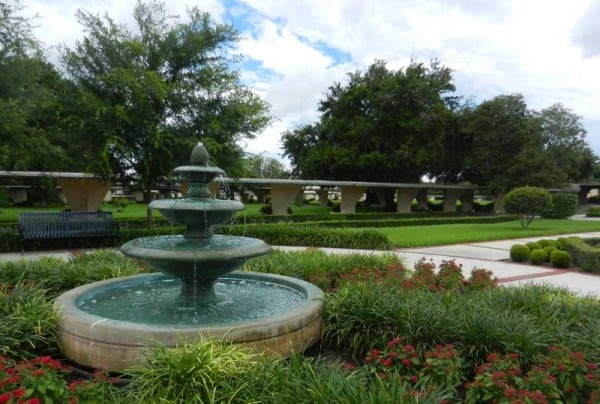 The answer, as it turns out, is they put their students to work. Labor for several of the buildings came from students, some of whom got free tuition in exchange. With male students largely gone during World War II, at least one building was built primarily by female students.

Some buildings have been so changed over the years that it is difficult to see Frank Lloyd Wright’s vision. Touring the library, for example, is an exercise in imagining how it once looked before its open spaces were chopped up to make it more usable. 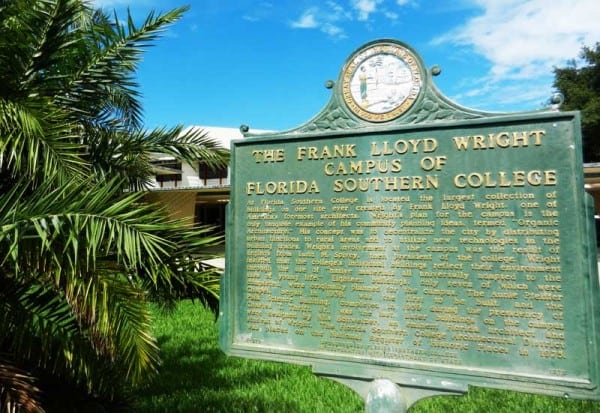 The Frank Lloyd Wright-designed campus of Florida Southern College in Lakeland has been listed on the National Register of Historic Places since 1975.

Other buildings are examples of Wright ideas that didn’t work out that well over time. He loved flat roofs, for example. But Florida’s thunderous downpours make them impractical in the long run. One flat-roofed building, the science lab, is made ugly by a roof full of fans and ductwork that is required to replace all the air in the chemistry labs in 45 seconds, the current safety standard.

Elsewhere, windows designed for clear glass have been covered with what looks like rice paper to cut down on heat gain from the sun, destroying the light and the view of clouds Frank Lloyd Wright envisioned.

But there are magical moments, too.

On the in-depth tour, you go into the theater in the round Wright designed. The amazing acoustics make a whisper spoken along the wall audible throughout the room. Meanwhile a person standing in the center of the room hears an echo of his voice that no one else hears. (It is, the guide joked, for professors who like to hear themselves talk.) 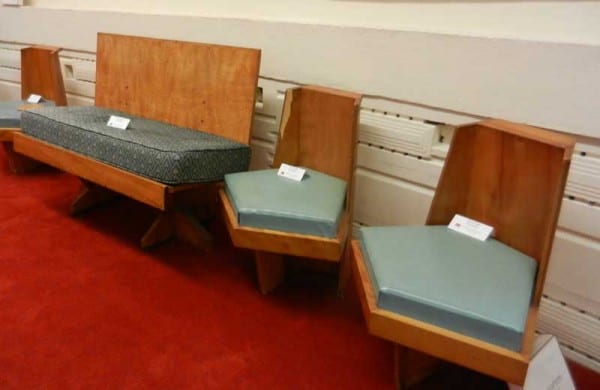 You can’t help but be enchanted by the concrete block walls of Pfeiffer Chapel, in which small squares of colored glass are embedded to create a beautiful lighting effect. Similarly, the Water Dome, a 160-foot-wide perfect circle, is magnificent when the fountains are blasting and creating a dome of water spray. (To conserve water, the fountain flows on a posted schedule a few hours each day.)

The Frank Lloyd Wright-designed buildings are not your typical college campus, and that’s the beauty of them.

From Interstate 4, take exit #32 (US 98 South) The name of the street changes to South Florida Avenue. Stay on South Florida Avenue about a half mile past the downtown area. Turn left on Frank Lloyd Wright Way (formerly McDonald St.) and go six blocks. The Tourism and Education Center is on the corner of 750 Frank Lloyd Wright Way and Johnson Avenue.

Other things to do in Lakeland

Lakeland has a traditional downtown with some good restaurants and shops at Main and Kentucky. That intersection is a block from lovely Mirror Lake with its historic Promenade, which makes a pleasant .65 mile walk around the lake. Along the walkway is Hollis Gardens, which has formal flower beds and fountains overlooking Mirror Lake.

There are many lakes in Lakeland, and you should watch for swans on them. They are all descendants of two royal swans bestowed on the city by Queen Elizabeth in 1954.

On the outskirts of Lakeland is a favorite spot for birders from around the state: Circle Bar B Reserve. The large park is just minutes outside of town and features good hiking, appealing picnic facilities, a nature center as well as ideal conditions for attracting birds in the winter.

Planning your trip to Lakeland

I visited Southern Florida College with my 8 year old daughter after an aborted camping trip (due to flying insects and rain), and a stop at Disney over 30 years ago. I wanted to see the campus because I had years earlier toured a Frank Lloyd Wright Pennsylvania home, Fallingwater built over a stream and was impressed by the design’s sort of simplicity yet modern feel as it connected to nature by jutting out over a flowing river.

Anyway, we stopped at the Southern Florida campus on our way home to Plantation FL and as school was not in session we had free rein to just wander around and enjoy the campus. I wasn’t overly impressed until I entered the chapel, I had never been in a building I liked better for its beauty, it’s soaring up into the sky above evoking a peaceful and serene one could sit in for hours.

I love its name as “the bicycle rack in the sky and, had I lived in the area, I would have gone to church just to enjoy gazing above me. Probably the reason I picked up stained glass as a hobby subsequently.

As my husband and I have just purchased a little Casita camper, it’s now on my to do list for the first stop on our quest to see the country as soon as it is safe to do so. Probably the inspiration for me to subsequently choose to learn stained glass as a as a hobby for awhile.

Inspiring is an understatement for this building, it’s beyond words and gave me a reverence for the architecture's genius. A must see!

Thanks for your article, I just subscribed to your newsletter.