If you want to experience Florida’s past, have a meal in one of these seven historic restaurants 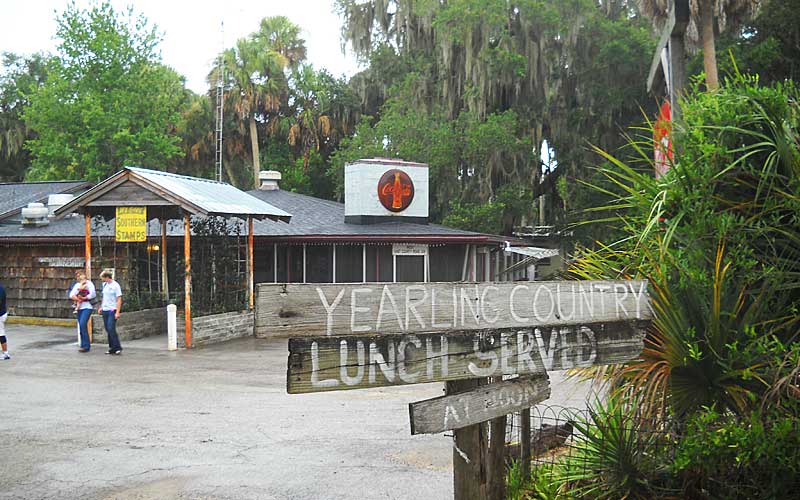 The Yearling, a historic restaurant in Cross Creek

On the road to Cross Creek,  where a state park preserves the home of the author of the beloved book The Yearling, I passed plenty of restaurants.

But I had done a little research and discovered something special.

Next door to the Marjorie Kinnan Rawlings Historic State Park, there is a restaurant founded in 1952, when Rawlings was still alive and writing.  Called The Yearling, the 63-year-old restaurant celebrates the Florida cracker culture that so enchanted Rawlings when she came to Cross Creek.

The Yearling is my idea of a great choice for a place to eat on vacation: It has roots in its location; it’s different from a place I’d eat at home, and it has a story to tell.

Here are six historic restaurants, each with its own story — from Prohibition rum-runners to 1980s drug-runners; from authentic 1920s grand hotel to an authentic 1950s diner. 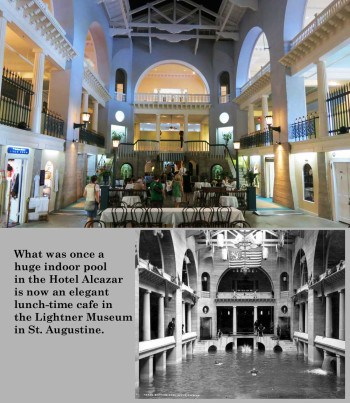 Café Alcazar inside the Lightner Museum in St. Augustine. The space was originally the largest indoor swimming pool in the world.

When Henry Flagler built the Hotel Alcazar in St. Augustine in 1889, he had the world’s largest indoor pool constructed to entertain the guests of this hotel and the famous Ponce de Leon Hotel across the street.

Today, in a development nobody then would have anticipated, the deep end of the pool is a spot where folks can enjoy an elegant white-tablecloth lunch.  And what a setting! Like the rest of the Hotel Alcazar, the four-story-high pool structure features the ornate  Spanish Renaissance Revival architectural style. The tell-tale sign it was once a pool? The rough concrete steps to the second floor, once used by bathers entering the water.

The restaurant is open only when the museum is, which means it serves lunch daily and dinner only on “First Fridays” when St. Augustine has a popular art walk. The menu features salads, sandwiches, paninis, crepes, as well as shrimp, pasta and a few other entrees. (Visiting with a group of travel writers, we were served a complementary lunch, but our opinions are our own.)

If you stop at the Café Alcazar, be sure to walk around the building and enjoy the gorgeous courtyard of the Lightner Museum, with gardens, palms and a stone bridge over a beautifully landscaped koi pond. The Lightner Museum is fun too: It’s about the most eclectic museum you’ll find, with everything from a huge polished stoned urn once in the Russian czar’s palace to a cigar-label collection. 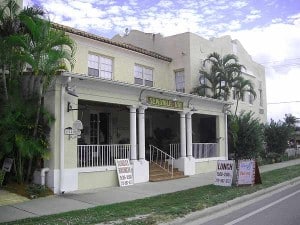 There is one good reason to visit off-the-beaten path Indiantown:  The fried-green-tomato-and-bacon sandwiches at the Seminole Inn, a well-preserved 1926 hotel serving Southern style home cooking.

The Seminole Inn is also a good stop if you are heading to the rural beauty of Lake Wales and Sebring, whose  state parks and small towns are worth exploring.

The Seminole Inn has one of those quirky stories that Florida is full of — this one includes the Duchess of Windsor.

Indiantown is an outpost in a rural area today, but in 1926, Baltimore banker and railroad man S. Davies Warfield decided it would be a model city and the headquarters of his Seaboard Air Line Railroad. His niece was Wallis Warfield, later the Duchess of Windsor, and the story goes she was the hostess at the hotel’s grand opening gala, as well as a repeat visitor. (Wallis would go on to cost a British king his throne.) 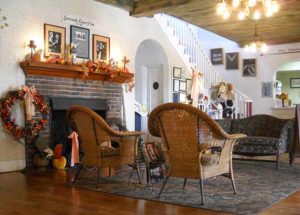 The lobby of the Seminole Inn has a feel for the past.

The dreams of the Baltimore banker didn’t materialize — hurricanes and the Depression intervened — but the Seminole Inn, with its 20-inch-thick walls, is a survivor.

Today, it’s a popular spot for Sunday brunch and it’s now the place to meet for free tours of the nearby Barley Barber Swamp, home to ancient cypress trees.  (Find how to reserve a seat on a Barley Barber tour.) 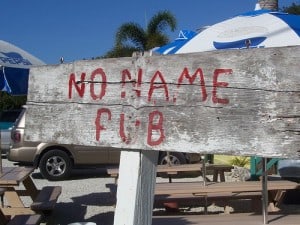 We love No Name Pub for its 80-year-old  Dade County pine bar. We love it for the huge and delicious sandwiches and pizza. But, we have to admit, we really love it for its money.

No Name Pub, which calls itself “A Nice Place If You Can Find It,” is a few minutes off U.S. 1 in Big Pine Key in the Florida Keys, about 30 miles north of Key West.  You have to wind through residential neighborhoods to find it, so use your GPS if you have it.

Outside, it looks like an old wooden cottage. Inside, however, every surface is covered with thousands of fluttering dollar bills. Most are decorated — people’s names and initials, messages, doodles. (The wait staff will bring you markers.) The restaurant estimates  the total at $90,000 and growing: It’s hard to resist adding your own buck to the collection.

If only half of what they say about the No Name Pub is true, it’s still a good story.

The pub began as a general store and bait shop in 1931, with the eatery added in 1936. Around that time, the upstairs was occupied by a brothel — a common theme, apparently.

The Keys were a wild place in the ’70s and ’80s; lots of people got rich smuggling marijuana. The pub’s website says that’s when the tradition started: “There was a lot of illegal money passing through the Keys back then . . . so much money in fact they started hanging it on our walls.” 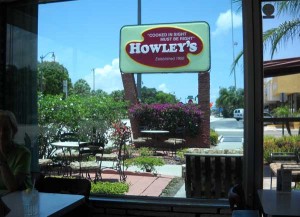 For a trip back to a different era of Old Florida, you can return to the 1950s at Howley’s, a classic American diner founded in April 1950 by Patrick J. Howley.  It has changed hands only three times in its history. It was purchased and restored in 2004 to its original look and feel by Rodney Mayo and partners,  owners of a dozen nightclubs and restaurants in Palm Beach County, according to partner James Brady.

The owner’s background in nightclubs is probably responsible for the hipster elements at play. The wait staff is young with piercings and attitude. The walls display paintings by local artists. It serves alcohol: Beer selection skews toward craft brews (there are regular beer-pairing dinners.)

Howley’s keeps many diner traditions alive, however.  There are formica tables with a vintage boomerang pattern, a fountain with the original swivel stools and such decorative details as the hula-dancer lamp and star lightbulbs that were featured in Howley’s original 1950 poster. When the diner was restored, carpet was ripped out and the floors were returned to original terrazzo. 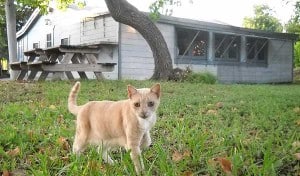 The rustic bar at Cap’s Place looks identical to historic photos, though the kitten is an addition to the scene.

Part of the charm of visiting Cap’s Place is winding through a Lighthouse Point neighborhood in your car, parking at the dock and then taking the five-minute boat ride over to the restaurant. You feel like you’re on an expedition, and you are — into the past.

Cap’s Place is close enough, though, that a visit there makes a good part of a staycation.

Fifty years ago, the local newspaper did a big feature story on Cap’s Place, founded in 1928 and Broward County’s oldest still operating restaurant. The yellowing clip, heralding Cap’s as a vestige of Old Florida, is one of many such articles decorating the place.

The funny thing is: You could write the same story today. And take the same photos. And interview the bartender who has the same last name as the person quoted in that story — the daughter of the founder. 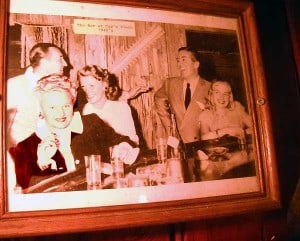 The walls of the rustic bar are lined with photos that capture Cap’s history.

Cap’s was founded in 1928 by a bootlegger and over the years has entertained  guests  ranging from Winston Churchill to Joe DiMaggio to George Harrison.

Dining here is like getting to eat and drink in one of those historic houses where docents glare at you if you get too close to the furniture. The food, while expensive, is good, but it’s the atmosphere that makes it worthwhile.

The Yearling in Cross Creek 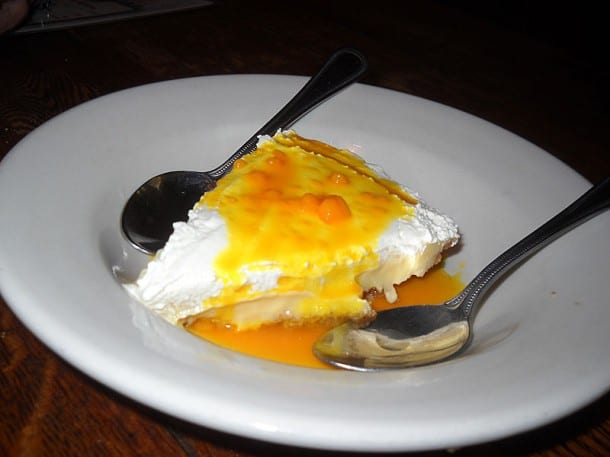 Sour Orange Pie at The Yearling restaurant in Cross Creek

The ambiance of the place, which looks like a weather-beaten shack, is old Florida hunting lodge.  It’s decorated with antique outboard motors, old guns and enough memorabilia to stock a store. Stuffed fish and mounted deer heads abound.

The restaurant is open Thursday to Sunday from noon to 8 p.m. and often features live music by the legendary blues singer Willie Green.

I absolutely love all of your articles. I'm an ex-travel consultant (or agent back in the day), really enjoy taking road trips around Florida, and am a travel writer wanna-be...but instead I think I'll just read all of your articles and map out my retirement!

Patti: Thank you so much. We do love exploring Florida. And we do publish guest posts. Here's info on that: https://www.floridarambler.com/contributors/