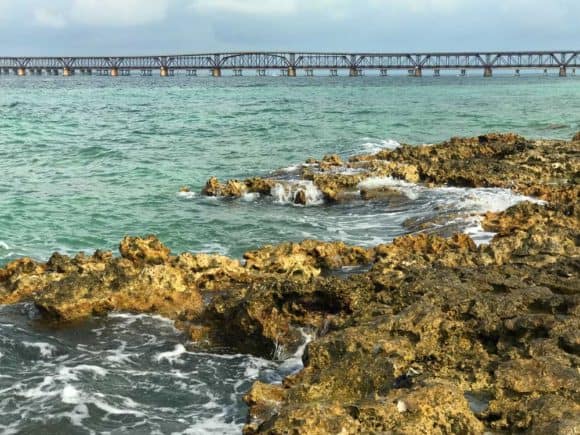 Little Bahia Honda Island, a popular destination when kayaking Bahia Honda State Park is two-thirds of a mile out in the Atlantic. It has a view of the historic saddleback bridge  (Photo: Bonnie Gross)

No matter where you go when kayaking Bahia Honda State Park, you can’t miss the key thing that makes it special: The water.

The waters around Bahia Honda Key have a clarity and a color that are out of your dreams. So blue. So transparent. If it’s a calm day, peering into the shallows is like snorkeling; you see everything from fish to sharks to conch shells. 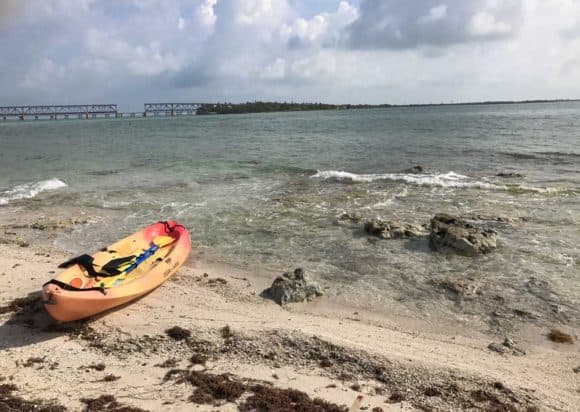 This Florida Keys state park, 45 miles up the Overseas Highway from  Key West, also has the best beaches in the Keys, a picturesque historic bridge and some of the most sought-after campsites and cabins in the Florida State Park system.

If you’re lucky enough to spend time here, getting out on the water is one of the best ways to experience Bahia Honda.

Visitors with just an hour or two can rent kayaks at the park and explore the Atlantic coastline.

Those with a bit more time and kayak experience can venture over open water to Little Bahia Honda Island, a speck of tropical paradise.

Those looking for a half day or a full day of kayaking Bahia Honda State Park can explore the serene bay side of island or even circumnavigate the island. (You can’t take rental kayaks to the bay side of the island, so this is only for those who bring their own kayaks.) 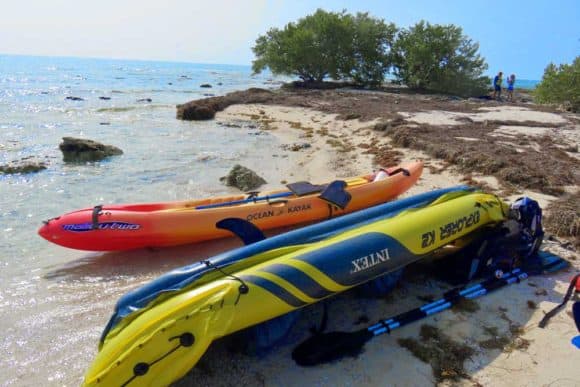 If the seas are calm, the weather is clear and you’re comfortable in a kayak, the trip to Little Bahia Honda — two-thirds-of-a-mile over open water —  is a memorable outing.

Whether you rent a kayak from the park or bring your own, you head out from the beach-front kayak launch on Loggerhead Beach.  From here, you can see the tiny tropical island called Little Bahia Honda in the distance. 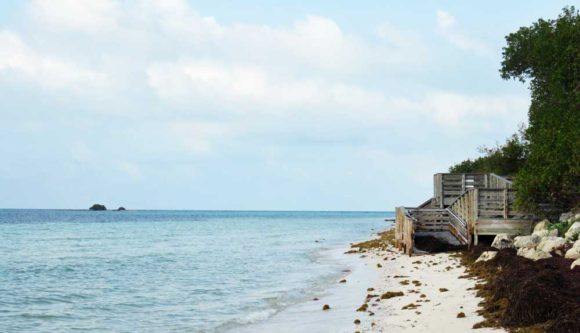 From the beach at Bahia Honda State Park, you can see the Little Bahia Honda Island in the distance. (Photo: Bonnie Gross)

It’s only a half hour paddle to the island, a small outcropping of ancient coral reef rocks. Three trees have managed to grow on it and the side facing the state park has a bit of a sandy beach, although it is studded with rocks. 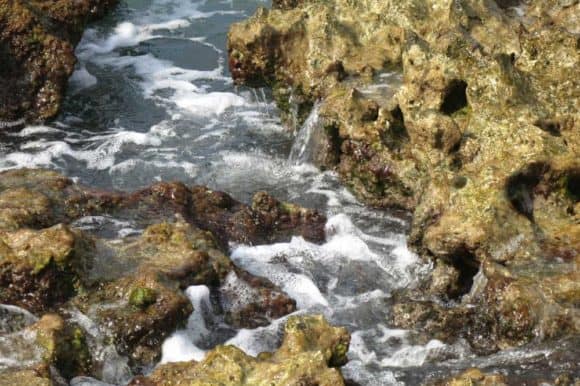 On a Saturday morning, we got an early start and arrived at the island before anyone else, a strategy I recommend. You can’t beat the feeling of having your own little island all to yourself. (By the time we left, four other kayaks had arrived.)

The island is about 300 feet across,  surrounded by rocks that extend into the water. From the island you gaze over a beautiful expanse of turquoise water at the historic saddleback bridge and the state park. Stunning!

The island itself is a rock garden of tide pools. When waves wash over the rocks, the water flows in little waterfalls from pool to pool.

The rocks around the island are a good place to snorkel. While these coral rocks are thousands of years old and are not living coral, they do attract a variety of fish.

Snorkeling around the island, we were thrilled to find three queen conchs with the mollusks inside the intensely pink inner chamber. (Conchs are protected species in Florida and it is against the law to remove a living conch. The conch you eat throughout the Keys is imported from elsewhere in the Caribbean.)

Little Bahia Honda was just about perfect, including the lack of litter, despite its obvious popularity. 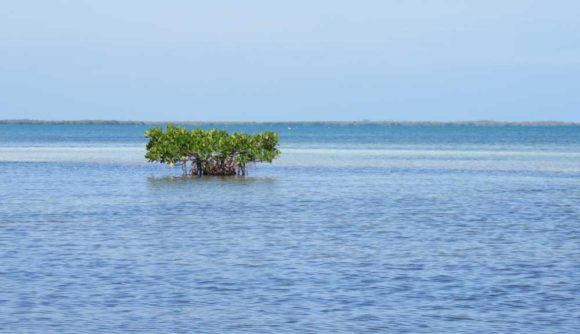 The peaceful bay side of Bahia Honda State Park in the Florida Keys. (Photo: Bonnie Gross)

We visited when the wind was so strong that the kayak concession was closed at the Bahia Honda State Park and kayaking in the ocean was impossible. 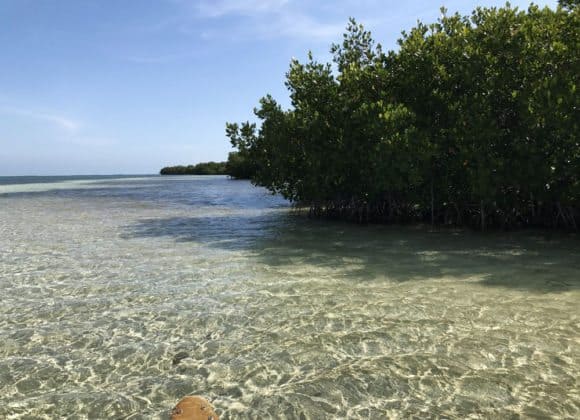 On the bay side of Bahia Honda State Park, the water is shallow and crystal clear, making it an appealing kayak destination. (Photo: Bonnie Gross)

We had a great day of paddling, however, putting in at the boat launch at the marina and heading under the new bridge to explore the bay side of the island.

The water on the bay side was flat and crystal clear. As we paddled over the shallows along the mangrove-lined island, we spotted four or five small sharks, a ray, a sea star and any number of fish.

Shallow areas with sandy white bottoms made the water look vivid blue and, with the exception of two passing power boats, we had the whole expanse to ourselves all morning.

When we got to the channel between Ohio Key and Bahia Honda, however, our easy paddling ended. The wind blew straight at us and the tide ran strongly against us.  As hard as we paddled, we stayed in one place.

Let that be a warning to you: Before you head out, check on the timing of the tides. When going through the Ohio Key-Bahia Honda channel, you want to paddle in whichever direction the tide is running.

In our case, the Atlantic was so windy, we were better off returning the way we came — on the bayside.

We didn’t get to paddle along the Atlantic shore, but we explored it on foot from the beach. At low tide, the northeastern end of the island is surrounded by shallow water and sandbars that extend a distance out.

If you have conditions conducive for circumnavigating Bahia Honda, it is about a 6 mile trip. Strong kayakers can do it in three hours. If you dawdle, pause and take pictures, however, you could spend the whole day, and it will be quite a day.

Renting kayaks: The concession at Bahia Honda State Park charges $18 an hour for a double kayak and $12 an hour for a single. They do not encourage kayakers to go to Little Bahia Honda Island (but they don’t forbid it.) They do not allow kayaks to go under the old Saddleback bridge to the bayside. These sit-on-top kayaks are best for exploring the beach area.

Florida Rambler has a complete guide to visiting Bahia Honda State Park, including informaton on the campgrounds and cabins.

If you are at the sand spur beach parking lot and loop around, you'll see an area through the mangrove that you can launch on the backside of the parking lot. We did not do it. Didn't seem like much wildlife in there and the road is loud. The ranger said if the tide is right you can paddle out under the little bridge on the way to the parking lot and into the ocean side.

What about the tidal lagoon in the middle of the park? Can it be paddled?

Good question! I have a kayak guide that recommends exploring both lagoons (on either side of the highway) and we searched along the bay side for the entrance and coudn't find it. On the Atlantic side, the entrance to the lagoon was sanded over so there was no water access. We asked a ranger about paddling the lagoon. She didn't seem to know much about it and said "No, people don't kayak in there. You'd just get lost." I think it's possible to find the bay-side entrance if you searched for it. (And the search itself would probably be an interesting day of paddling.) The downside to the lagoons would be the steady traffic noise as they are very close to the highway. Let me know if you do end up finding a way in!