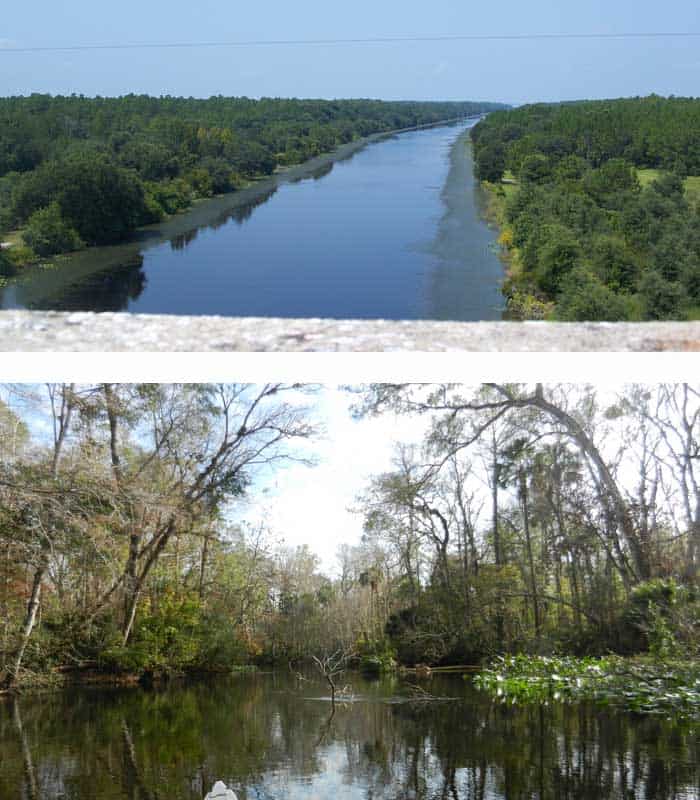 At top, a portion of the Cross Florida Barge Canal that was completed, representing what the Ocklawaha River could look like today. Below, what it actually looks like today. (Photo: FloridaRambler.com.)

This wild Ocklawaha River near Ocala forms the western border of Ocala National Forest. The Ocklawaha is pristine, profoundly quiet and lined with ancient cypress trees. It’s the sort of the place where in an eight-mile kayak trip, we saw one beer can, two man-made structures and dozens of birds, turtles and gators.

This Ocklawaha River could easily be gone, however.

By all rights, it should have been obliterated by the Cross Florida Barge Canal, a construction project that would have turned this lovely wildlife-filled river into a wide, dead, industrialized channel. 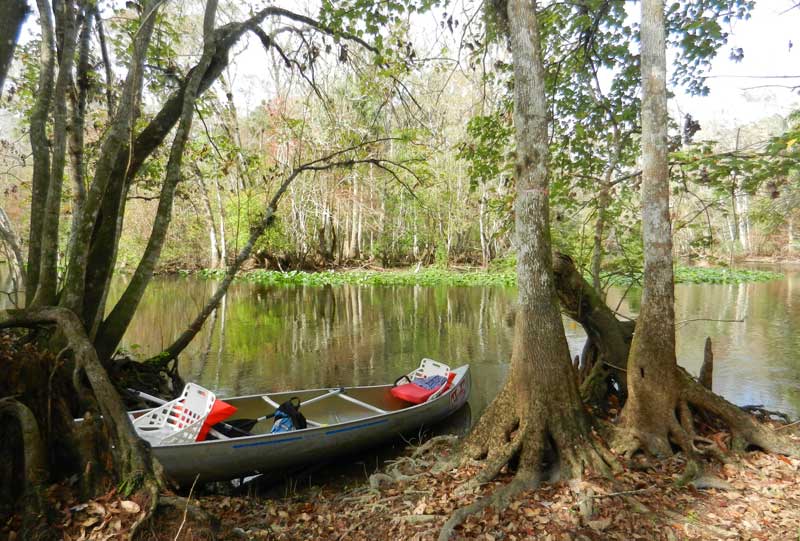 Our picnic site amid cypress trees and knees on the Ocklawaha River. (Photo: David Blasco)

Construction of the Cross Florida Barge Canal, a shortcut for ships between the Atlantic and the Gulf of Mexico, began in 1964. Its proposed route followed the Ocklawaha River and would have widened and channelized it.  It was never finished, though, thanks to opposition from Florida environmentalists.

The only sign of that project on the Oklawaha River are its huge bridges –  towering structures that are a strange site in the middle of a forest and over only a small river. The bridges were designed to allow big barges to pass under. The canal project was killed in 1971 after it was almost a third complete. 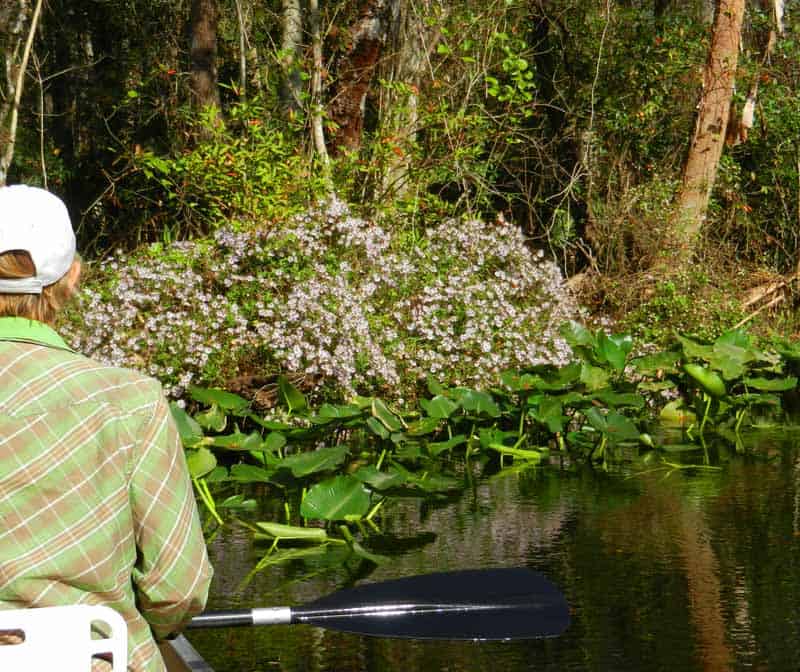 Flowers bloomed along the shore of the Ocklawaha River. (Photo: David Blasco)

The land along the river, which was purchased for the canal, has become the one-mile wide Marjorie Harris Carr Cross Florida Greenway. This corridor allows black bears, deer, bobcats, otters and other wildlife, which is plentiful, to move freely. It’s named in honor of the woman who led the fight to save the river.

When I decided to paddle the Ocklawaha,  I didn’t know the history. I was merely looking for a pretty river near Ocala to explore. The Ocklawaha River delivered.

There’s a steady current, so with livery service and a one-way route, it was an easy and relaxing paddle. Fallen trees and limbs have been cut to allow small boats to pass. Much of the Oklawaha’s water comes from the spring-fed Silver River, so lower portions of the river have spring-like clear water with fish visible. 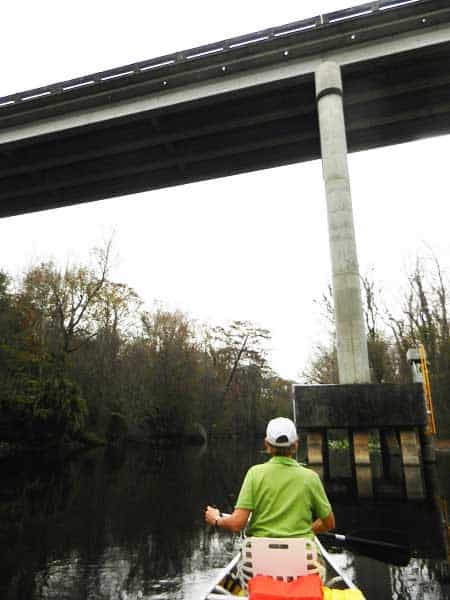 The tall bridge over the Ocklawaha River was built as part of the Cross Florida Barge Canal. The construction was stopped, but the strange over-sized bridge remains. (Photo: David Blasco)

We arranged our trip through Ocklawaha Canoe Outpost and Resort. We took the most popular trip, the four-hour paddle from Gores Landing north to the outpost. You could easily spend more time on this trip if you explored the tributaries and stopped to take photos. Trips of different lengths are available, including two- and three-day overnight trips with camping at primitive sites along the river.  The outpost also rents six cabins that sleep up to six. 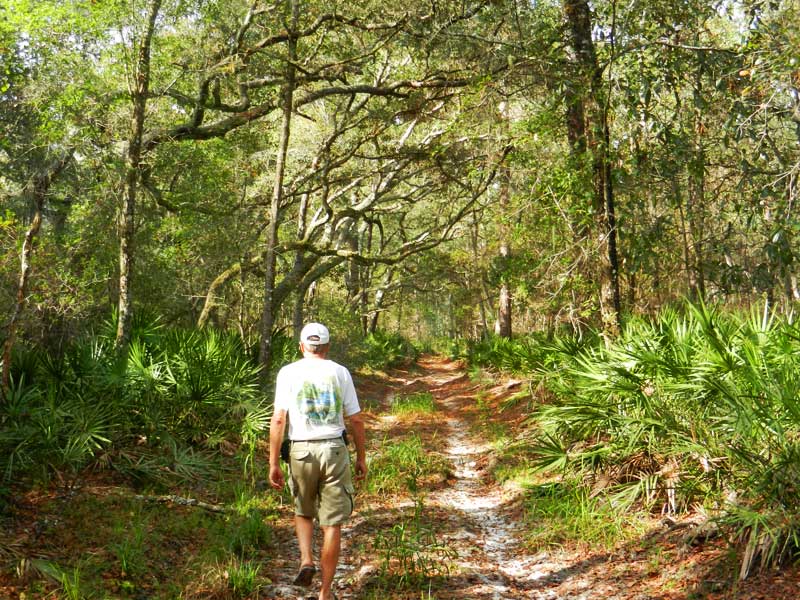 We pulled our canoe ashore along the Ocklawaha River and explored a ways down this lovely forest lane. (Photo: David Blasco)

We saw just one other boat on the December weekday we visited. We saw uncountable turtles, a dozen alligators and a variety of birds including our favorites that day: kingfishers flitting about with their big heads and rattling call.

For sheer beauty, there are several nearby spring-fed streams that might beat the Ocklawaha – the Silver River and Juniper Springs in Ocala National Forest, for example. But the Ocklawaha River is the only one of the three that lends itself to a multi-day outing with primitive camping.

Paddling the eight-mile section of the river, I had the feeling I was far from the commercial world. The space seemed vast, with no telltale highway sounds or power lines to bring me back to daily life.

And the Ocklawaha is worth experiencing because it’s nice to celebrate that it’s still there. In fact, because the land purchased for the barge canal became a greenway, you could argue the Ocklawaha River is wilder and better preserved because of the Cross Florida Barge Canal.

Tips for planning a trip on the Oklawaha River 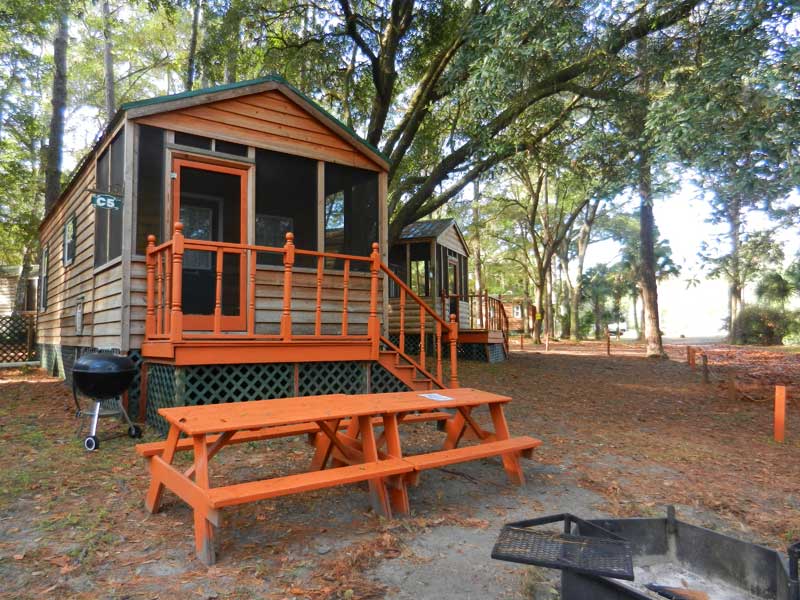 Things to do near Ocala and Ocala National Forest