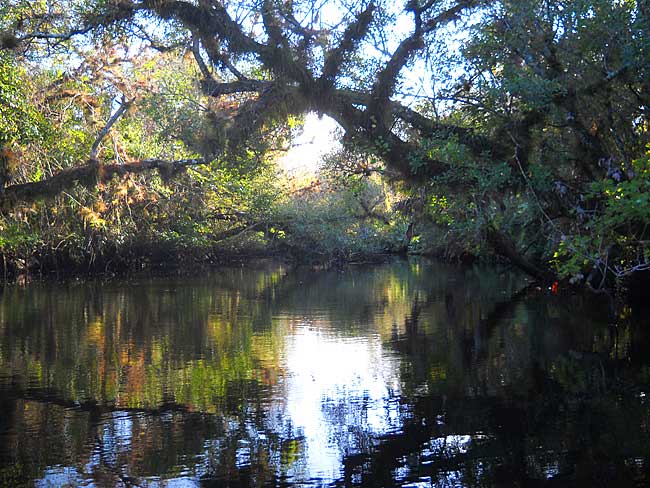 The St. Lucie River South Fork deserves to be better known as a kayak and canoe destination. I have several Florida paddling guides; none list it.

I’ve paddled the St. Lucie River several times and have always been delighted with the scenery, the wildlife and the remote feeling, even though it is five minutes off I-95.

The St. Lucie River is wild and gorgeous  — a jungly forest of old live oaks thick with airplants and Spanish moss. There are a few small islands that inspire the imagination and, after paddling about two hours, you reach a remote area where you can picnic and take a hike reachable only by boat.

Located right at an I-95 exit 101 to Stuart, it’s 90 minutes from my Fort Lauderdale home, which means for a large urban population, it makes an easy day trip into nature.

The only downside:  At some points, the growling hum of I-95 is heard in the distance. It’s worth living with, though, to kayak such a beautiful river. The trees are thick with epiphytes on St. Lucie River. (Photo: Bonnie Gross)

From Hosford Park, you paddle upstream (south.) There is little current and it’s an easy paddle the whole way. The entire trip up and back is about seven miles.  For the first 30 or 45 minutes, there are trailers and houses on the left, with undeveloped forest that is part of Halpatiokee Regional Park on the right.

Once you get beyond the houses, the twisty river surrounds you and you are likely to startle a great blue heron and see osprey swoop down to nab a fish. There are so many manatee warning signs on the houses along the way, they must be frequent visitors, though we didn’t see any. Mullets jumped and splashed and we saw a variety of birds, including a beautiful flock of black-bellied whistling ducks. (Notable for their very orange-red beaks and legs.)

The river goes from being a saltwater estuary with mangroves to a fresh water river, where we saw a few small alligators. Otters are seen occasionally, according to Ed Stout, owner of South River Outfitters, a kayak shop that was located on this river for many years and moved to a new location on US 1..

Among the delights of the paddle are the islands you encounter. We enjoyed circumnavigating each one, but if you want to stay on the main river, just remember to stay left. The largest and first island is called Treasure Island, and it contains a clearing that makes a good place for a snack. It has a short overgrown path down its middle.

Treasure Island has a great story, according to Ed Stout. The land was owned by a real-estate investor in the 1920s, but there was little action in Martin County. So he devised one of those classic Florida real estate gimmicks. He buried a sack of gold on the island and advertised a one-day treasure hunt in papers in Tampa, Jacksonville and other cities, on the theory that anything that brought people to his land was good for business.

“Three hundred people came,” Stout says, “That’s probably more people on that island than have ever been there at one time before or since.”

Somebody did find the gold, but nobody bought the land. Soon, the real estate boom collapsed and, in the end, Treasure Island was preserved.

Treasure Island is part of Halpatiokee. The 400-acre park extends along the west bank of the river the length of the kayak trail.

After two hours of paddling, you reach a landing in the park where you can pull your boat on shore, lunch at a picnic table and find the trail through the river hammock.  If you hike the full loop, it’s three miles and takes about two hours. Shortly after the park, the river peters out into unappealing ditch, so the landing makes a good turn-around. Except for Treasure Island, there are few places where it is easy to get out of your kayak or canoe.

The St. Lucie South Fork was litter-free, clean and clear on our visit. But, like many South Florida waterways, man has tampered with it, and its health is at risk.

Over time, the river recovered, but the essential problem hasn’t changed and could occur again during a wet year.

For now, however, the St. Lucie South Branch is a gem worth discovering.  And, for the long term, it’s also a gem worth protecting.

Planning your visit to the St. Lucie River South Fork More things to do near St. Lucie River

My wife and I did part of the South Fork this past weekend but had to cut it short and couldn't do the entire trip due to an approaching storm. Fabulous place. Traveling past the mobile homes and houses made for an interesting paddle. Then past them you truly are in old Florida with mossy oak trees hanging over the river banks. We're headed back very soon to do the whole trip! Thanks Bonnie or we would have never found this.

So glad you enjoyed it! And I appreciate getting the feedback.

My wife and I did the full trip today(Nov. 30 which is my birthday) We normally launch at Cove road intracoastal, and Kayak to St. Lucie preserve. Today was our first time on the south fork, and we totally enjoyed it. We saw lots of water fowl, and many gators. One large gator watching over at least 9 young on the bank. Also many soft shell turtles sunning. The scenery was just beautiful. The south fork will be our go to from now on. BTW..you don’t have to fight the tidal currents on this trip, which was easier on my shoulders

Thanks so much for posting your comments. We haven't paddled this one this year, so it's good to hear it's as nice as we recall.

Very nice article, Bonnie. I and my friends in Palm Beach Pack and Paddle Club have been paddling the South Fork for over 40 years, long before the park, etc. All that time, it's been my traditional birthday paddle. The hiking trail was put in by the local chapter of the Florida Trail Association (FTA). It hasn't been too well maintained lately, unfortunately. TWO THINGS: (1) the traffic signal at Cove Road is the second after I-95. The first goes to South River Outfitters on the right, and to the restaurants on the left. (2) Last time I talked with Ed, just over a month ago, he wasn't renting bikes anymore; little profit in it and very fussy. But people can still ride up on their own bikes. It's fun.

Thanks Linda for the useful information. I'm going to use it to update the story. I really appreciate it.

Can you swim this water?

It wouldn't be a good idea to swim here. Alligators.