There are hundreds of miles of canals in South Florida, many lined with upscale homes, but only a few neighborhoods can match the architecture and landscaping of ultra-posh Royal Palm Yacht and Country Club in Boca Raton.

Forbes magazine, the bible of the 1%, has ranked Royal Palm as the No. 1 most expensive gated community in America. 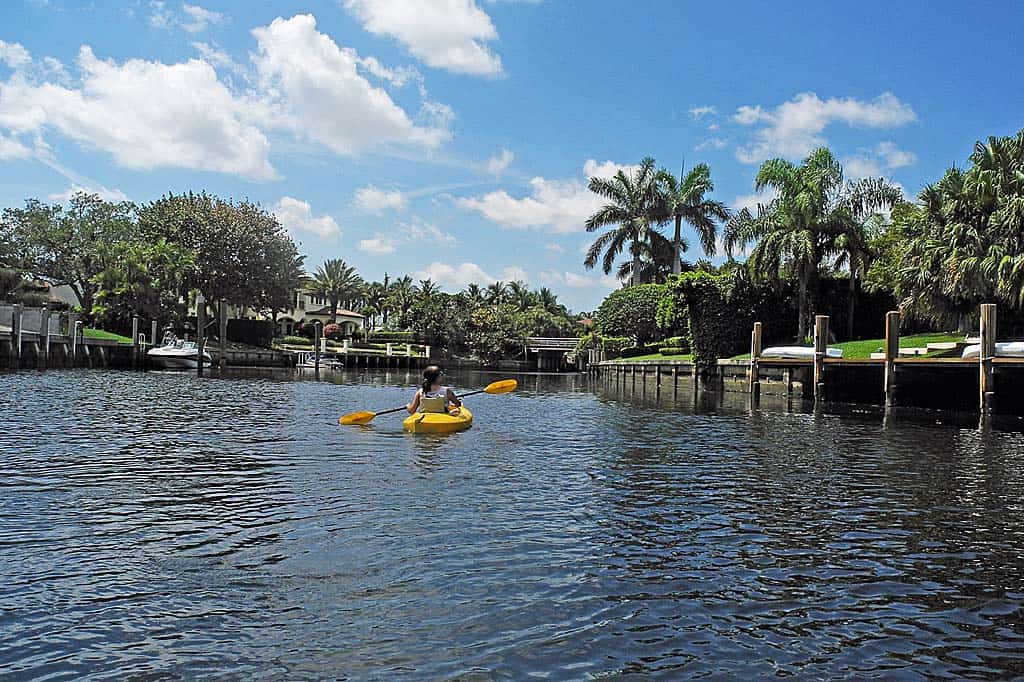 A leisurely paddle through the Royal Palm Yacht and Country Club

I’ve often passed through in my fishing boat, taking a shortcut from my home in Deerfield Beach to the Boca Inlet, but have never given much more than a passing nod to the elegant McMansions that line the  waterways harboring mega-yachts in this exclusive neighborhood.

Oh sure, we gawked. But we never explored. This time, we left the boat at home in favor of kayaks for a slow crawl. 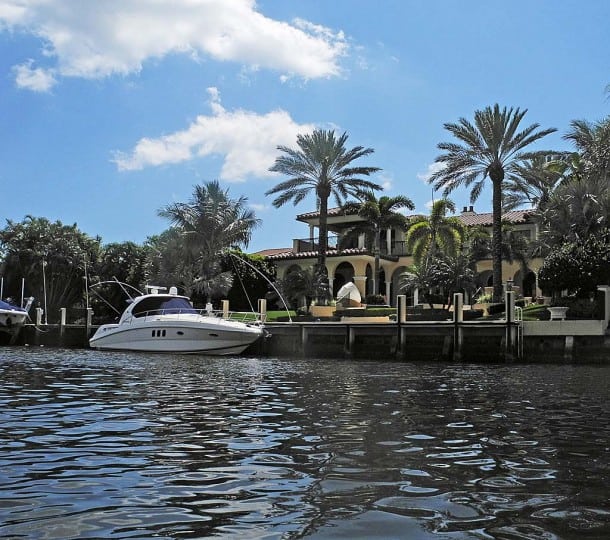 Back yards of elegant homes await 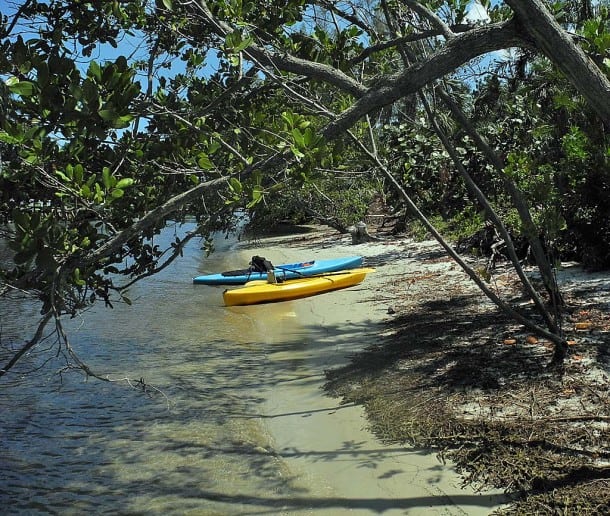 We would launch at Pioneer Park in Deerfield Beach, which is just east of Dixie Highway and north of Hillsboro Boulevard, and then paddle down the Hillsboro Canal to the Royal Palm Yacht Club marina, where a cutoff canal will take you deep into a network of waterways.

After exploring a few of the canals, we would exit the neighborhood near Deerfield Island Park, an isolated island park accessible only by boat that is maintained by the Broward County Parks and Recreation Department. The park is in Royal Palm’s back yard.

There we could bring our picnic lunch and go for a hike, or just lounge on one of the island’s beaches for our midday meal before continuing our urban adventure.

But we forgot to bring the lunch!  Sigh.

Although designed for trailer boats, the ramps at Pioneer Park in Deerfield Beach are an ideal starting point due to proximity to Royal Palm’s canal system.

Trailered boats zip on and off the ramps here on weekends, and there’s little tolerance for delays, so your best bet is to pull into the cul-de-sac at the top of the ramps (near the ice house), away from the traffic, to unstrap your kayaks (or canoe) and unload.  We carried our yaks and gear down to the dock on the west side of the double ramp so as not to interfere with the steady stream of boaters.

When there’s a break in the boat-launch traffic, move your yaks down the ramp and into the water.  Tread carefully because the ramps are sometimes slippery with algae slick. It’s not terribly bad, but you don’t want to slip and fall onto the concrete ramp.

There is a charge for parking a boat trailer, but since you probably won’t have a trailer, you can drive around to the parking lot that serves the playground and softball field and park there for free. (If you have a trailer, pay $1 per hour at the central ticket dispenser.) 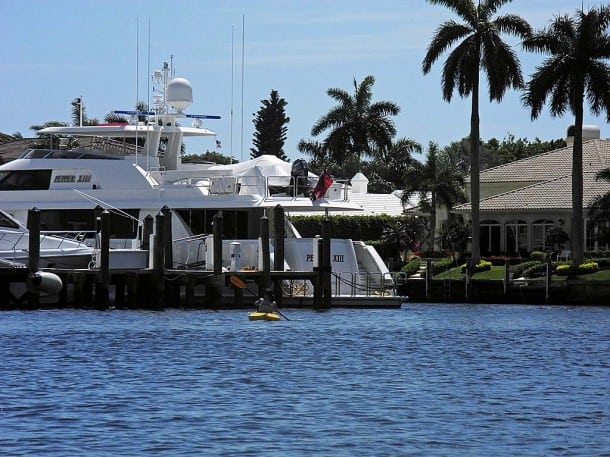 Making the turn at the Royal Palm Yacht Club marina

Heading north from the ramps, then curving east, on the Hillsboro Canal, you’ll soon pass under the Federal Highway (U.S. 1) bridge.  The huge Marina One complex will be on your right, and the Royal Palm Yacht Club will be on your left.

Make a left around the east side of the yacht club and paddle north into Royal Palm’s canals. From here, the neighborhood’s interior canals branch off to the right.

These homes are awesome, and the landscaping is out of a magazine. You will rarely see residents enjoying their magnificently manicured tropical back yards, but you will see and hear fountains and waterfalls, fish jumping in the canals and birds in the well-groomed trees.

It’s quiet. Very quiet. A leisurely paddle past the homes of the rich and famous.

To give you an idea, on many excursions through this area, I watched one home being built a few years ago on a large corner lot. It took them more than a year to complete, and the result is a mansion that would rival many museums in size. In fact, it looks like a museum with its earth-tone stucco exterior, marvelous columns and entry ports.

At one point during construction, they stacked nine commercial-size A/C units on one side of the house in preparation for installation. The units have now been placed around the house, disappearing in the lush tropical landscaping. Imagine the electric bill!

The canals are public but the properties are not. Respect their privacy and steer clear of their docks, lest you set off screeching alarms that will bring down your day.

While this is usually a trouble-free paddle, be aware that on the far side of the neighborhood is a stretch of the  Intracoastal Waterway that gets very busy on weekends and is particularly rough. In my experience, it is possibly the roughest and most turbulent section of Intracoastal in South Florida.  Avoid it if you can.

It’s not so bad on weekdays, but you have to keep in mind that many of these boaters know nothing about right-of-way and the consequences of their wake, so they will often ignore you (and the rules) and barrel right past.

Within the confines of Royal Palm’s canals, there is virtually no boat traffic. 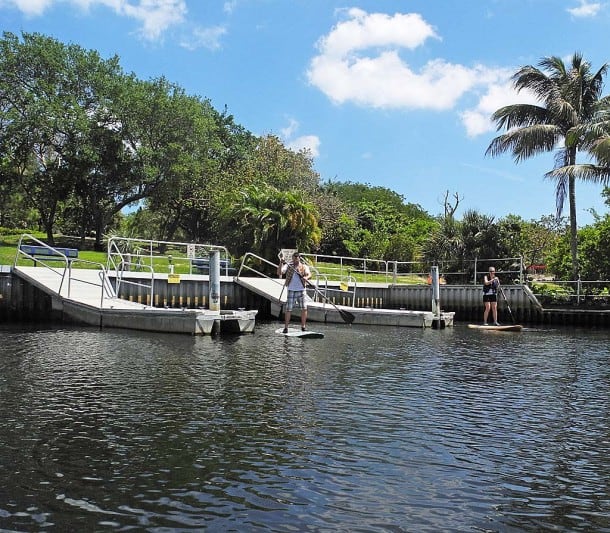 There is a sweeping grass lawn at Deerfield Island Park where you can have a picnic or just hang out for a spell. Two nature trails go deeper into the island. (Photo by Bob Rountree)

On the south side of Royal Palm Yacht and Country Club is the Deerfield Island Park, a 54-acre triangular-shaped island bordered by the Intracoastal, the Hillsboro Canal and Royal Palm’s canals.

There is a small marina on the south side of the island along the Hillsboro Canal where you can pull your yaks up onto the floating docks. These docks are not exactly kayak-friendly, being designed for motorboats, so be careful when you disembark.

The island has two nature trails that traverse through a diverse community of vegetation, including a lot of non-native species that are gradually being removed and replaced.  The half-mile Coquina Trail includes an observation platform overlooking the Intracoastal Waterway, and the three-quarter-mile Mangrove Trail has a 1,600-foot boardwalk that bridges a mangrove swamp on the west side of the island.

There are picnic tables and a small shelter, or you can just picnic on the grass near the marina.

The island also has a few small beaches, where you can just pull up your yaks and picnic. We found one beach on the north side of the island, facing Royal Palm, that was ideal. Too bad we forgot our lunch! But we pulled up on the beach anyway to stretch our legs.

On the first Saturday of each month, from 8:30 a.m. until 10 a.m. from October until May, volunteers lead bird walks through the park.  And on the fourth Sunday of the month, from October through April, there are island tours that focus on the history of the Intracoastal.

If you don’t have a boat to get to the island, there is a boat shuttle that will carry you over from the Sullivan Park, below the Hillsboro Boulevard Intracoastal Bridge, where the Riverview Restaurant was once located, across from The Cove shopping center. 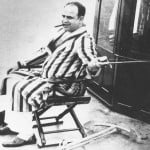 The island was originally part of a peninsula that extended south from Boca Raton, which has led to quite a few turf wars between Palm Beach and Broward counties, Boca Raton and Deerfield Beach, over whose jurisdiction the island belongs.

But upon one thing everybody agreed – Al Capone was not welcome here.

The notorious gangster, who already owned a home on Palm Island in Miami, had tried for years to build a home on the peninsula  But residents of Boca Raton did not favor the thought, so Capone was fought every step of the way, ordinances were passed targeting his quest, and eventually Capone’s bid died as he was shuttled off to prison.

The island was later cut off from the peninsula by a canal, but Capone’s signature remained.

It became known among locals as Capone Island.

Thanks for the fine article. I am an avid kayaker who lives in Deerfield Beach. I will definitely check this area out. I plan to launch from the new kayak launch at the Hillsboro El Rio park on SW 18th St. in Boca Raton. It looks like a wonderful kayak launch site.

Let me know how the new park works out. I'll add it to the story after I get your feedback.