In September 2015, this video of manatees at Weeki Wachee Springs State Park went viral and has been viewed more than 9 million times. The area’s tourist bureau credits manatees and mermaids with the growing popularity of the area.

Thanks to some spectacular YouTube video of paddle boarders and manatees, Weeki Wachee Springs State Park, about an hour north of Tampa, is more popular than ever.

Example: Returning from kayaking Weeki Wachee springs, our shuttle driver described how nine girls flew here from Ireland for a weekend because Weeki Wachee Springs State Park was on their bucket list.

Despite the crowds, this famous river is still stunning. But there is growing concern that Weeki Wachee Springs is being over-loved and over-used. 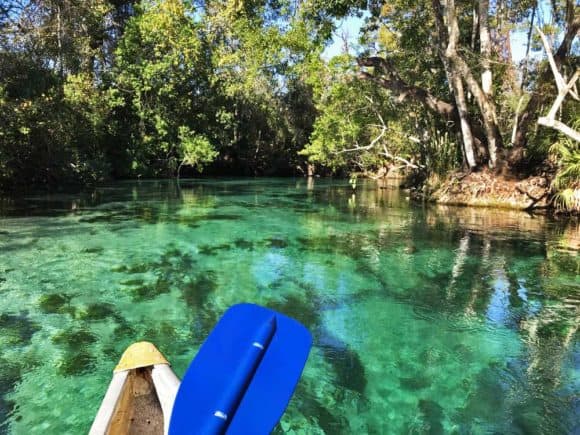 Kayaking Weeki Wachee Springs State Park: The flow of crystalline water is so large that it replaces the water in the river every 60 minutes, making the water spectacularly clear and clean. (Photo: Bonnie Gross)

UPDATE: Weeki Wachee Springs State Park re-opened Thursday, March 18. The famous mermaid show is back as is the Buccaneer Bay waterpark. The water park will be open daily through March 21. From March 22-May 29, the waterslides, kiddie pool and lazy river will only be available on weekends. The waterpark will open full-time for the summer on May 29. The swimming/beach areas will remain open daily. The Wilderness Cruise is not available.

The Weeki Wachee has actually been famous for a long time. Since 1947, tourists have stopped to gaze into its dazzling waters at underwater ballet shows performed by pretty girls dressed as mermaids.

The beauty of the Weeki Wachee starts with the powerful spring, which has such a large flow of crystalline water that it replaces the water in the river every 60 minutes, making the water spectacularly clear and clean.

It also helps that the Weeki Wachee is a fairly narrow stream, at most places about as wide as two lanes on the highway, making it a more intimate experience than many springs.

The upper section of the Weeki Wachee also has not been spoiled by development. For several miles you will see no man-made structures, only magnificent cypress trees lining the shore. Kayaking Weeki Wachee Springs: It is a narrow stream, at most places about as wide as two lanes on the highway, making it a more intimate experience than many springs. (Photo: Bonnie Gross)

Much of the rivers bottom is white sand, which makes the water sparkle a beautiful aqua marine color with schools of fish as visible as in an aquarium.

At Weeki Wachee Springs State Park, there is a separate admission for the part of the park that used to be a roadside attraction, including the mermaid show.

There’s no better way to see Weeki Wachee Springs than in a kayak and, if you’re lucky, you’ll meet the original mermaids — the endangered West Indies manatee.

But the fame and popularity of the river has resulted in some big changes to the traditional Weeki Wachee Springs kayak trip. If you kayaked the Weeki Wachee a few years ago, as I did, several things were probably different.

To handle the crowds, in 2018 the state started limiting the number of boats that can launch at Weeki Wachee Springs State Park to 280 individuals per day. Even if you bring your own boat, the park requires that you make a reservation to launch to keep under the limit.

Recently, to further reduce stress on the river, the Weeki Wachee Springs State Park kayak route has been greatly shortened so that paddlers only travel 2.8 miles before being shuttled back to the start. In the past, kayakers paddled 5 miles to Rogers Park, where the shuttle picked them up.

To prevent shoreline erosion, within the state park, there is no swimming or getting out of your kayak.

Another big change: The Weeki Wachee Springs State Park kayak operation no longer offers livery service for private kayaks or SUPs. For a fee, you can launch from the state park, but you are responsible for getting back to the starting point. Details are under “private launch” on this page.

An alternative to kayaking from Weeki Wachee Springs State Park is to kayak from Rogers Park, where you can launch your own boat or rent from the Kayak Shack.

From this location, you must paddle upstream to reach the “blue” section of the river — where the bottom is sandy and the clear water glistens a striking aquamarine color.

The Weeki Wachee is a big spring, however, so the current is pretty strong, and it is about 1.5 miles upstream to the most beautiful part. Experienced and strong kayakers will be fine; new kayakers might find the going difficult.

Your best bet, a staff member at the Kayak Shack advises, is to check on the tides and time your visit a few hours before high tide. The tidal influence on Weeki Wachee River extends a few miles upstream and with the tide on your side, it is easier to head upstream.

The clarity of the Weeki Wachee is especially appreciated when you are lucky enough to see visiting manatees.

We encountered manatees along the spring run on a cool December day a few years ago. 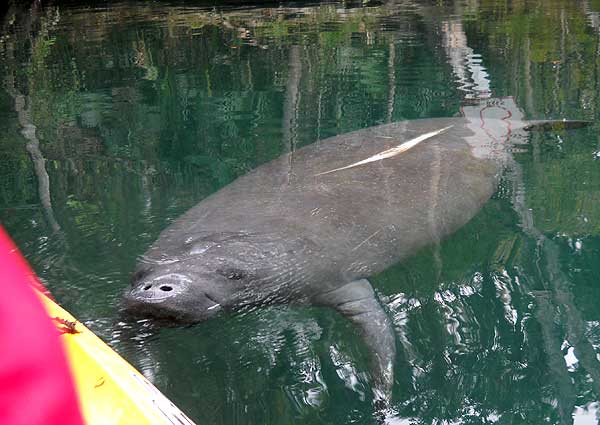 Manatee with a large scar on its back at Weeki Wachee Spring “Hospital Hole.” (Photo: David Blasco)

On that visit, we knew to watch for a place called Hospital Hole, a deep, extinct spring, and a half mile upstream from Rogers Park.

Sure enough, as we approached a wide section of the river with noticeably darker color, we heard a snort and saw a snout.

Soon, manatees surfaced all around us. And for the next half hour, we floated there. The manatees nudged our boats, brought their noses out of the water and looked us in the eye. They acted like friendly dogs. This is an animal that could win the Miss Congeniality Award of Endangered Species. (They would perhaps do less well in the swimsuit competition.)

You can see manatees at any point along the Weeki Wachee; sometimes there are manatees right at the springhead.

Kayakers who start at the Weeki Wachee Springs State Park no longer paddle as far as Hospital Hole.

In warm weather, visitors have always come to swim. Weeki Wachee Springs State Park does not allow tubes or inflatables of any kind and does not allow visitor to get out of their kayaks or canoes.

Downstream, however, visitors have traditionally landed on banks, swam, climbed trees and jumped from rope swings — all things that are harming the clarity and health of the Weeki Wachee spring run.

A major environmental study was completed in 2020. Rope swings and ladders have been removed and such activity is being discouraged. Those who come to swim are encouraged to do so away from the banks of the river to avoid trampling.

The Southwest Florida Water Management District produced this video with tips on how to preserve the river when kayaking Weeki Wachee Springs. 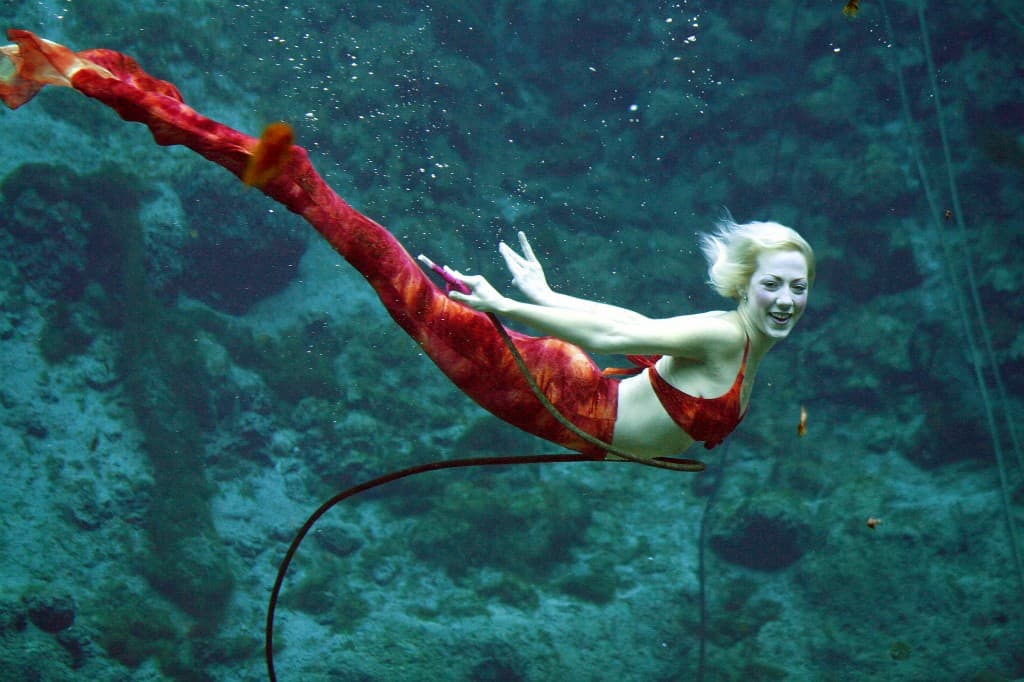 The Little Mermaid at Weeki Wachee.

We love manatees, but we also love Old Florida, including tacky tourist attractions, so we wouldn’t miss the mermaid show either.

Founded in 1947, the attraction went bust and was taken over by Florida to become a state park in 2008.

Weeki Wachee’s glory days were the 1960s. ABC purchased it in 1959 and promoted it so thoroughly on TV that it was famous around the world. (The story is girls came from as far as Japan to try out as mermaids.)  Perhaps the ultimate sign of its coolness then: Elvis visited.

Today, the Weeki Wachee mermaid show is little changed and decidedly low tech. The swimmers still use air tubes to breathe. The big special effect is the curtain of bubbles that covers the window between acts.

As they did from the beginning, a mermaid demonstrates how to eat a banana under water. The great part of that act, though, is that a half dozen turtles hover nearby awaiting their three-times-a-day banana snack. The turtles, in fact, are sort of the clowns in the show. They continually need to be pushed and batted away as they crowd the mermaids and interfere with their movements. 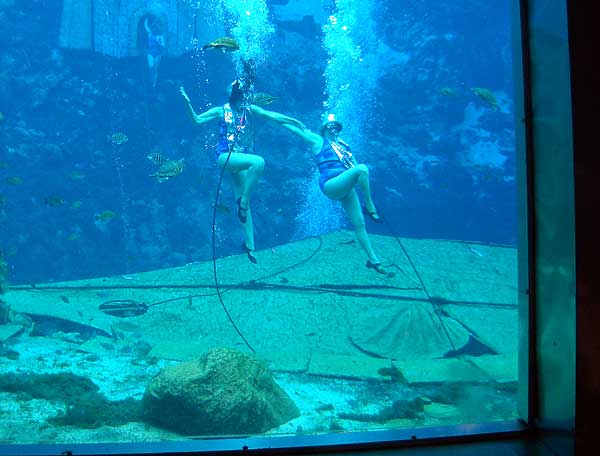 Our timing resulted in us seeing the once-a-month performance of the mermaids of the past. These mermaids had an average age of about 55 and they say they perform because they love it. They must: Most don’t have bathing-suits bodies any longer, and I applaud their willingness to get out there in front of people at all.

There is also a sandy white beach where you can swim and snorkel in the in the crystal-clear spring waters.

The parks has a lazy river around the swimming area; inner tubes are available for rent.

There is also water play area for children six years and younger and certified lifeguards on duty throughout the waterpark.

Admission to Weeki Wachee Springs State Park is $13 for adults and $8 for children 6 to 12. Admission includes a boat trip down the river, an animal show and the mermaids.  Next door is the summer-season water park, Buccaneer Bay. Admission includes the mermaid show and Buccaneer Bay. You do not have to pay admission to rent a kayak or SUP. There is a separate area to the left to the main entrance for kayaking.

Do I recommend it? Absolutely, if you set your expectations correctly for a retro experience. I’m even glad I saw the chubby mermaids of yesteryear. Florida Rambler is devoted to appreciating the authentic Florida, and it doesn’t get any more real than this

Things to do near Weeki Wachee Springs State Park: 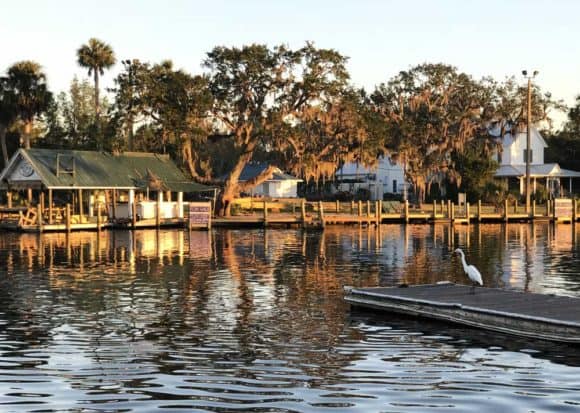 Where to stay: The area immediately around Weeki Wachee is notably lacking in charm; you have your pick of Hampton Inns, Microtels and Holiday Inns. Within a half hour, though, is Old Homosassa, a riverfront community founded in 1835 with two adjacent moderately priced waterfront resorts: MacRae’s and Homosassa Riverside Resort. Riverside Resort is memorable for the small island off its bar that is home to a colony of monkeys.  While we strolled the waterfront, a group of manatees swam by.

Sadly, you have to make a reservation 2 weeks in advance to launch your own kayak from the state park :/

Thanks for this info, Amy.

It is better to kayak with the Kayak Shack off of Shoaline Road. Rent your Kayak for 35 and get it until 5 p m. Paddle up the river and back down, so you can go 12 miles not deal with the stupid rules or get your trip cut in half for the same price. AND the state park doesn't own the rental place, they are very sneaky, using the "state park" name.

My family and I visited Weeki Watchee last weekend to kayak. So many things have changed. The park only allows you to kayak about 2.5 miles in. Same price and you miss out on the best parts of the river. So sad.

Thank you for the comment. It's true there have been many changes as park management struggles to protect the river given the crowds it attracts.

Very little! I kayaked this river after Irma and one could see an occasional toppled tree, but the run is clear and beautiful.