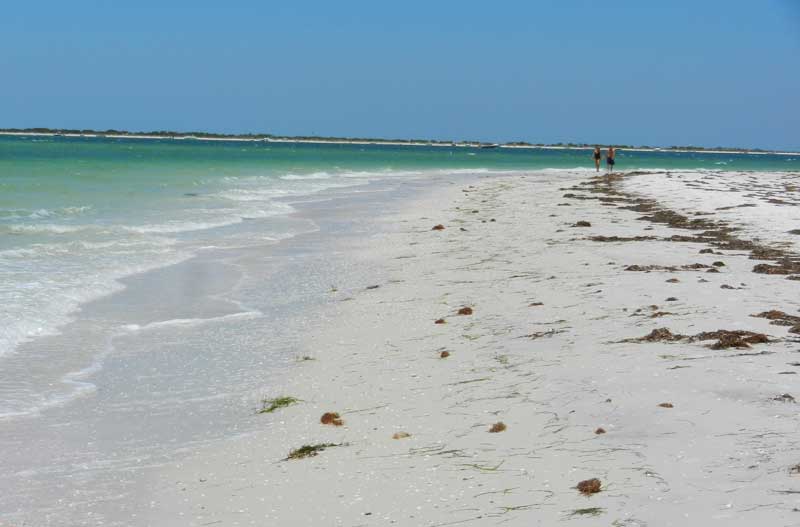 The northern tip of Honeymoon Island State Park is a sand spit reachable via a 3 mile walk. (Photo: Bonnie Gross)

Honeymoon Island State Park has a spectacular beach, a sweet name and one of those classic Florida-history stories.

It’s also a favorite beach for a populous urban area, and on a sunny May Sunday when I visited, it seemed like all 916,000 Pinellas County residents were there.

Yet the beauty of Honeymoon Island State Park is that even though it attracts crowds, you can still find beauty, solitude and nature. It’s an unusual combination of an accessible beach with lots of parking, first-rate concessions and facilities, and a natural beach with extensive areas full of wildlife. 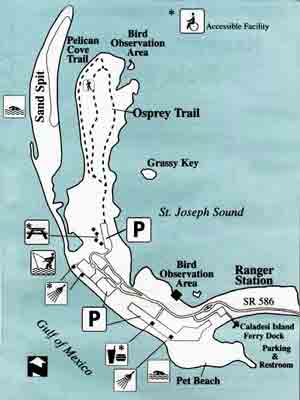 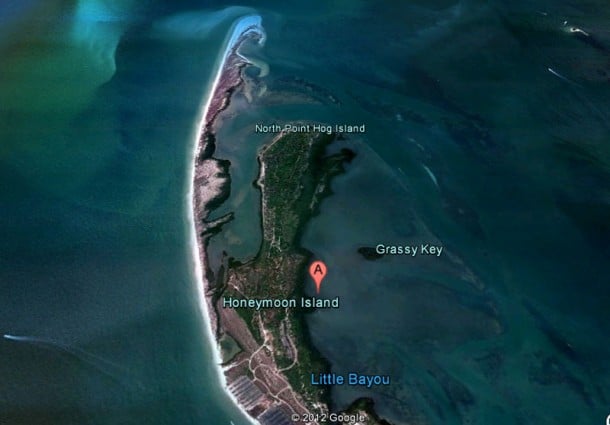 You reach Honeymoon Island State Park via the 2.5 mile long causeway. We were bicycling the nearby Pinellas Trail, so we biked out to Honeymoon Island on a trail that is widely used by cyclists, joggers and pedestrians. The causeway offers scenic views of St. Joseph Sound and there is free parking all long it. It’s a popular place to fish or launch kayaks.

The 385-acre park has three distinct beaches plus 2.5 miles of hiking trails through pine flatwoods .

The first Honeymoon Island beach you come to, labeled Main Beach, is deep and wide with that fine-grained white sand you find at the best of the Gulf’s beaches. There are huge parking lots and well-tended restrooms plus a café. People with extensive gear – coolers, umbrellas, six boxes of pizza — filled this beach. When people talk about Honeymoon Island State Park having a perfect beach, this is what they’re talking about.

South of this beach, very near the entrance to the island, is Dog Beach, where dogs on 6-foot leashes are welcome. Dog beach faces on Hurricane Pass, a good place for fishing but a somewhat hazardous location for swimming. Hurricane Pass separates Honeymoon Island from nearby Caladesi State Park. These two islands were one before the 1921 hurricane blew through.

My favorite, though, was the northern-most Honeymoon Island beach. This beach wouldn’t win any awards for its sand, because it is studded with rocks and seashells, and the beach is much narrower. But the north beach goes on and on and the farther you walk, the more stunning the scenery.

The Honeymoon Island beach is actually a sand spit extending into the Gulf of Mexico. It’s three miles to the end, and we walked it all, passing a rare beach-walker or boater along the way, but largely having the wide expanse of sand and surf to ourselves.

The reward for the long beach walk was reaching the end of the sand spit, where broad, flat tide pools, sand dunes and salt marshes stretch out in every direction. 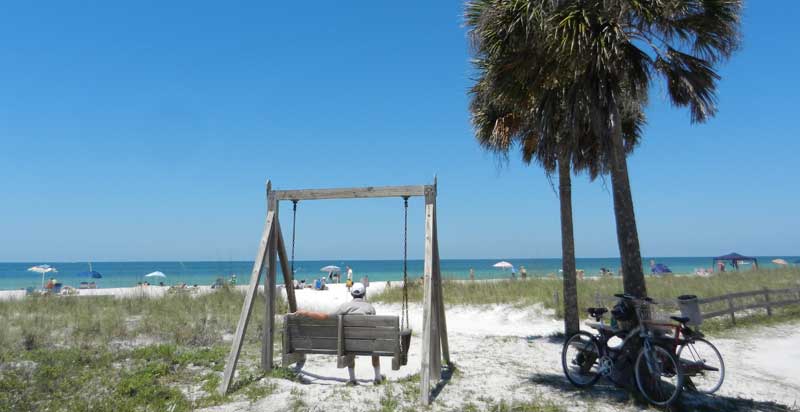 Away from the Honeymoon Island beach, a peninsula that juts into St. Joseph Sound is filled with pinelands and wildlife. The two trails, totaling 2.5 miles, loop through the area, which is home to more than 50 pairs of osprey and their nests. Occasionally, an American bald eagle nests here and great horned owls are frequent spring nesters.

Hikers on these sandy trails (too sandy for anything but fat-tire bikes) are likely to see gopher tortoises and armadillo. Signs warn about rattlesnakes, too, and several visitors mention on TripAdvisor that they did indeed spot rattlesnakes. 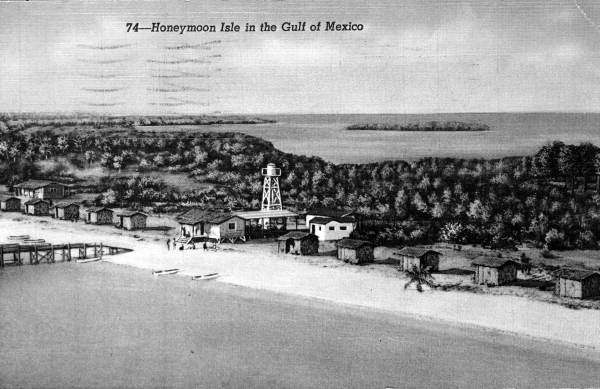 Would we still love this beach if it were called Hog Island?

Clinton M. Washburn didn’t think so. Washburn was one of those 1930s Florida real-estate marketing geniuses who came up with zany ways to attract attention. 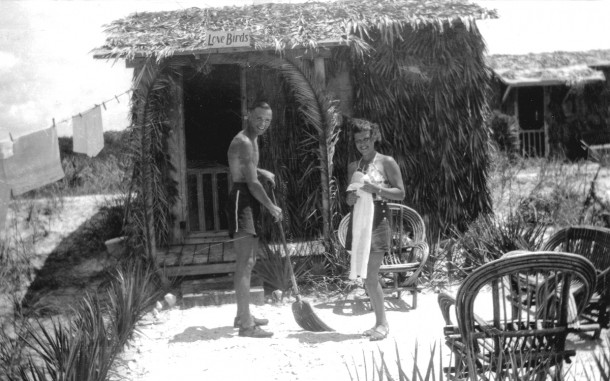 In 1939, Washburn bought Hog Island, so named because it was home to a hog farm.  After failing to sell the island for $25,000, he came up with a contest in conjunction with Life Magazine that was featured there and in a 1940 Paramount newsreel. 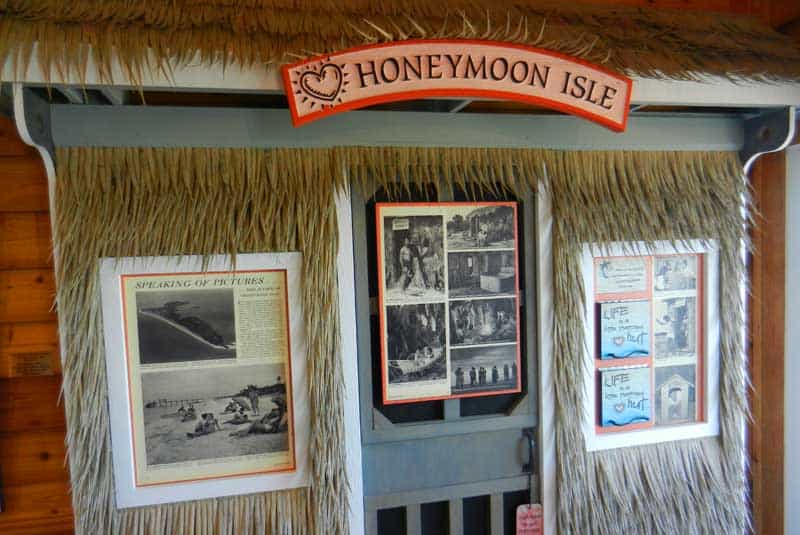 Newlyweds were invited to write Washburn to apply for free vacations on the re-named Honeymoon Isle on Florida’s Gulf Coast. Washburn had had 10-by-12-foot wooden thatched huts built on the beach. Each cottage came with a row boat and had a gas stove, but huts had no electricity and no plumbing. Couples had to be married less than two weeks and had to pay their own way – or have their travel sponsored.

Washburn was swamped with letters: Such is the power of tropical-island dreams. Applicants included future president Ronald Reagan and Jane Wyman, according to an exhibit a decade ago at the Dunedin Historical Museum. (They weren’t selected; they’d been married too long.)

Honeymooners in cottages named “Love Nest” or “Love Birds” swam, fished, explored, played cards and gathered in the evening in a recreation hall/grocery store, which did have electricity.

The nature center on the island has an exhibit depicting the Honeymoon Isle story. It’s full of wonderful staged black-and-white photos of couples living up to honeymoon stereotypes – she threatens him with a frying pan, he poses sadly peeking from a dog house, together they cuddle in hammock.

The honeymoon contest ended when life changed with Pearl Harbor. Washburn sold the island to Arthur Vining Davis in 1956 for $600,000 and it became a state park in the 1970s.

A 2000 St. Petersburg Times story about Honeymoon Island says that in 1991, 15 of the original honeymoon couples reunited on Honeymoon Island. They said it really was paradise.

Greatest asset: Great amenities with access to a wild and pristine beach

Parking: Ample and no extra charge beyond park admission

Alcohol: Not allowed, but Cafe Honeymoon serves beer and wine.

Pets: A dog beach makes this popular with pet-lovers. Dogs must be on 6-foot leashes. 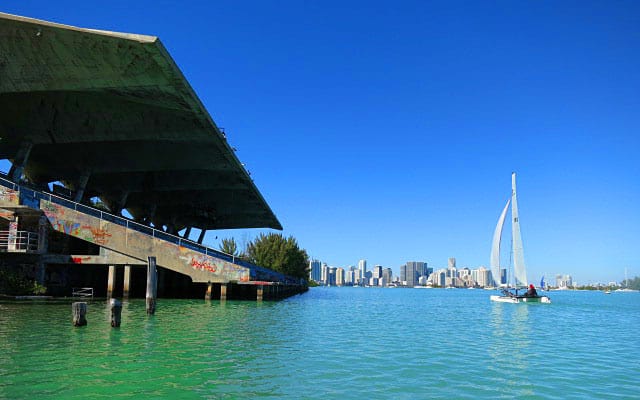 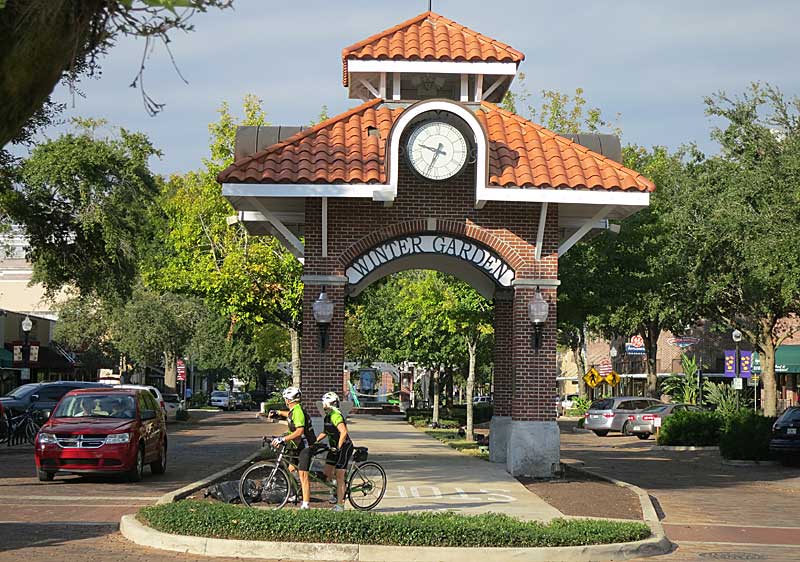 […] called “Hog Island”, Honeymoon Island received national attention in 1940, when the owner of the island invited newlyweds to come […]

Florida Spring Training Schedule & Things to Do Nearby