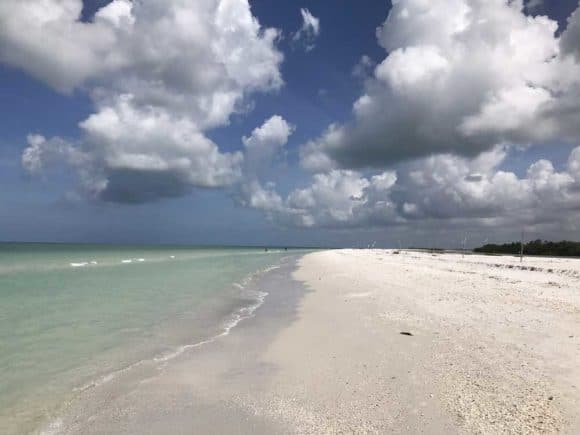 Things to do in Marco Island: Wade over to vast wild Tigertail Beach. (Photo Bonnie Gross)

Marco Island is a beachfront town a half hour south Naples that was carved out of the mangroves of the Ten Thousand Islands during the ‘60s and ‘70s.

Today, it is lush, green, manicured and the kind of place where a good deal on a hotel is when you find a room for under $250 a night.

But there are other things to do in Marco Island, which is located in an area rich in nature where you can still find a slice of Old Florida.

For visitors who want to get a taste of the authentic Florida or day trippers from Naples or points east, here are four things to do in Marco Island where you can experience that other Florida beyond the hotel pool. 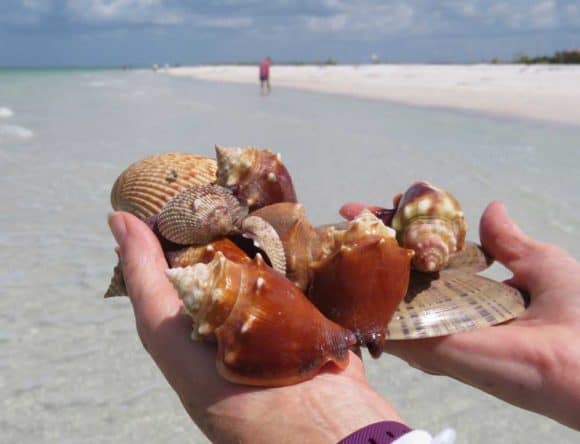 Things to do in Marco Island: Tigertail Beach is a great place for collecting seashells. I picked up this handful of shells in five minutes. (Photo: David Blasco)

The beaches are all great in Marco, but Tigertail Beach is an adventure for nature lovers.

Tigertail is a Collier County park and it’s also “new.” Fifteen years ago, it was an off-shore sandbar. The winds of Hurricane Wilma piled sand on the southern end, and today Sand Dollar Island, as it is called, is connected to the mainland.

Tigertail Beach has a distinct split personality. You pay $8 to park and come to a clean and well-kept park with changing rooms, a first-rate snack bar that serves beer and wine, a great playground and a concession stand that rents kayaks, stand up paddleboards and other beach gear. This developed part of the park faces onto a salt-water lagoon.

Cross the lagoon, however, and you leave development behind. It’s three miles of beach with soft white sand, scads of shells, dolphins swimming off-shore, ospreys squealing overhead and so many shore birds that it’s a stop on the Great Florida Birding Trail.

Crossing the lagoon is an adventure: People hold their belongings above them, looking like those Oregon Trail scenes of pioneers fording the river. The lagoon is about 50 yards across and at high tide, the water comes up to waist or chest. The bottom of the lagoon is a squishy, grassy mud. You don’t sink, but you do have to overcome the “yuck” factor if you’re not wearing water shoes. 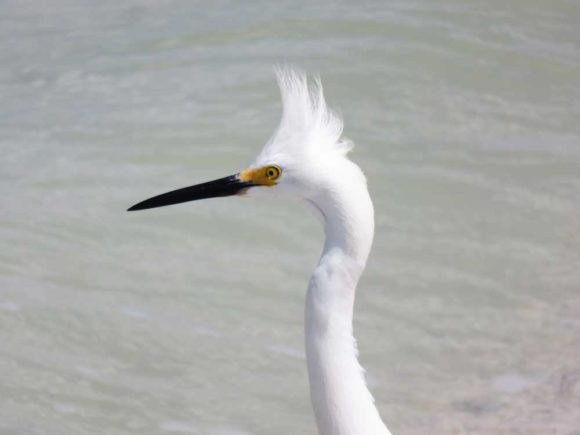 Your reward, though, is a stunning vista of blinding white sand and clear blue-green water. Walk north and you can stroll, swim and beach-comb for two miles of wild beach beauty.

Watch for birds: Adjacent to the park is Big Marco Pass Critical Wildlife Area. The CWA is managed by the state and is a resting site for a variety of migratory shorebirds. Three species — black skimmers, snowy plovers and least terns — nest and raise their young in the protected area of Tigertail.

Here’s a full story with more photos and tips on Tigertail Beach. 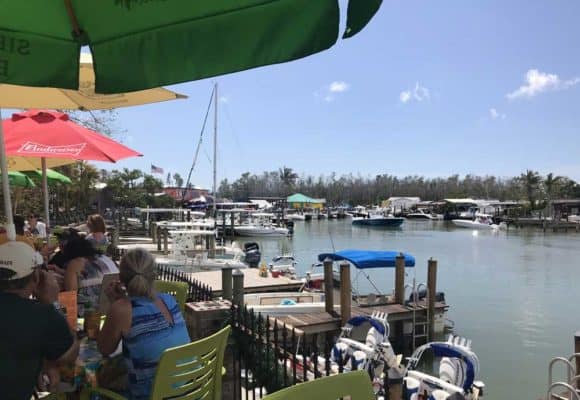 Have lunch or dinner in the historic fishing town Goodland

Twenty minutes from Marco Island you’ll find Goodland, a historic fishing town whose flavor is rustic – if you’re being kind.

Goodland got walloped in Hurricane Irma, and it still shows.

But the big draw in Goodland – a couple of waterfront seafood shacks with live music on weekends – were back in business for the winter season and continue to pack in visitors. (Several other Goodland restaurants failed to reopen after the storm.)

Goodland is essentially a small cluster of houses and trailers around a cove and marina lined with a few outdoor, very casual fish shacks. Many people come to Goodland as an outing by boat or motorcycle.

A live band plays on Saturdays and Sundays in a spot along the cove where no matter where you are outdoors, you are likely to benefit from it. The restaurants and music and general tiki-bar party atmosphere draws a huge crowd. Cars are parked all over, some two blocks away and one restaurant has a worker directing traffic.

We dined at the Little Bar, which is the restaurant given the highest ratings in Goodland by users of both Yelp and TripAdvisor. It’s not cheap, but the food was excellent. We recommend everything we tried –the fresh blackened grouper sandwich ($19.50, though it is market priced), the crab cakes ($18.95) and the smoked fish dip ($6.95.) 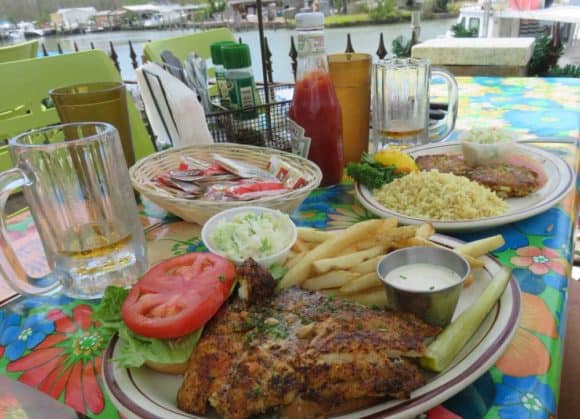 Things to do in Marco Island: Try the blackened grouper at Little Bar in Goodland. (Photo: David Blasco)

Little Bar has live music inside on weekends and offers indoor air conditioned dining too as well as many waterfront tables under umbrellas.

Nearby, Stan’s Idle Hour Restaurant, had more moderate prices (fish sandwich $10; peel-and-eat shrimp basket $14) and was packed with people dancing and drinking around the stage and waterfront.

Twenty minutes from Marco Island, this state park is known for its hiking and kayaking trails. It’s also home to the 1924 Bay City Walking Dredge, and how often do you get to visit a “National Historic Mechanical Engineering Landmark”?

The canoe and kayak trail on the Blackwater River is easy to explore: The park rents canoes by the hour, and plenty of never-before-paddlers were giving it a try the day we visited, paddling under a twisting, deep-green mangrove canopy .

There’s also a short nature trail in the park directly across from the boat dock, which is still closed because of Hurricane Irma damage.  For a longer hike, try the park’s 6.5-mile trail through pine flatwoods and cypress swamp. (The trailhead is on the Tamiami Trail outside the park’s entrance, portions are also closed due to the storm.)

My favorite thing: The huge monster-like walking dredge on display in the park, testimony to one of Old Florida’s great stories: How Baron Collier built the first road across the Everglades. Begun in 1915, the Tamiami Trail was completed in 1928, thanks in part to the Bay City Walking Dredge.

The sign at Bay City Walking Dredge #489 explains how Meece Ellis and Earl Ivey (can’t you just hear a banjo-accompanied folk song with those names?) operated this machine six days a week in sweltering, mosquito-infested Florida heat, digging the Tamiami Trail. (Never mind that the road was a very bad idea for the plumbing of the river of grass; Meece and Earl couldn’t know that.) The dredge is the last of its kind in existence.

Warning: Bring mosquito repellent. This park can be buggy place in the rainy season.

Admission to the park is $5 per car. 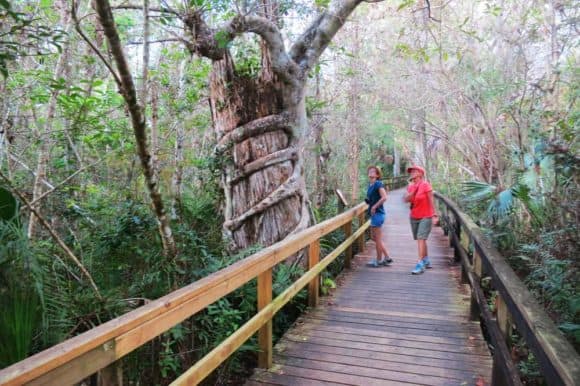 Things to do in Marco Island: Stroll the Big Cypress Bend Boadwalk off the Tamiami Trail. (Photo: David Blasco)

Just beyond Collier Seminole State park, about 30 minutes from Marco Island, you’ll find one of the prettiest boardwalks in the Everglades.

It’s a 2,000-foot-long boardwalk through old growth cypress swampland and it is a truly stunning place. It’s worth taking the time to take a stroll here — and it’s free.

The boardwalk is part of Fakahatchee Strand Preserve State Park, the orchid and bromeliad capital of the continent with 44 native orchids and 14 native bromeliad species. It’s where the ghost orchid, topic of a book by Susan Orleans and a movie starring Meryl Streep, lives, along with the equally elusive Florida Panther and Florida black bear.

The boardwalk is located on the Tamiami Trail. Here’s a guide to scenic Tamiami Trail through the Everglades. 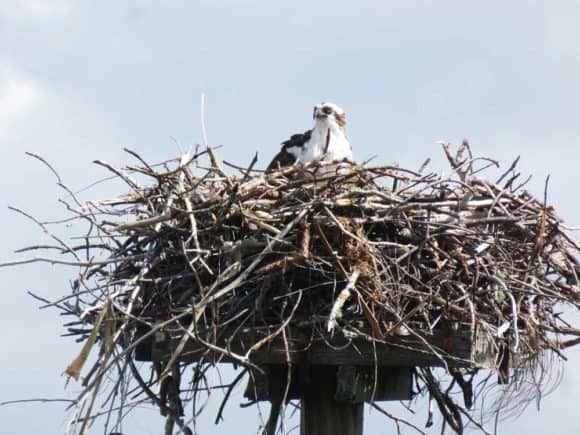 More things to do in Marco Island

There are many nearby Everglades recreational activities:

Thank you going in May!

Great additions! Yes, there is a lot more to on Marco Island. Your comment helps fill in the gaps.

Looks great! We will be there in January. Any special things going on in the area?