At HughTaylor Birch State Park, you can walk on the beach and have a picnic by the Intracoastal. Add a stop at nearby Bonnet House for a perfect day. 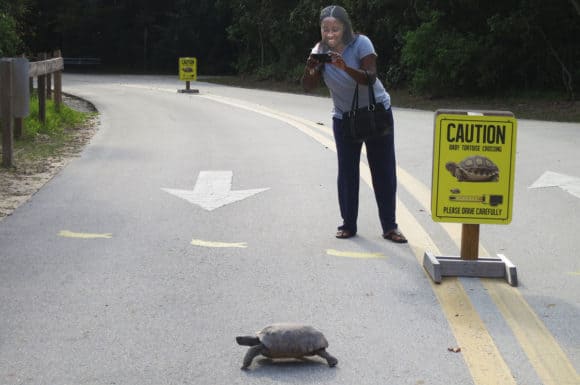 Hugh Taylor Birch State Park was the first state park I visited when I moved to Florida and it is still my favorite.

It’s MY park: It’s two miles from my Fort Lauderdale house, my daughters attended a beloved environmental summer camp there and lor several months I drove a tram on endless loops through the park as a volunteer. I know it better than any other park anywhere.

Still, it has taken me years to write about Hugh Taylor Birch State Park for Florida Rambler.

Why? It’s not huge and there is no feature so unusual or spectacular that it warrants a long drive to visit.

And yet, if you’re in the area, you can discover all sorts of wonderful things here. 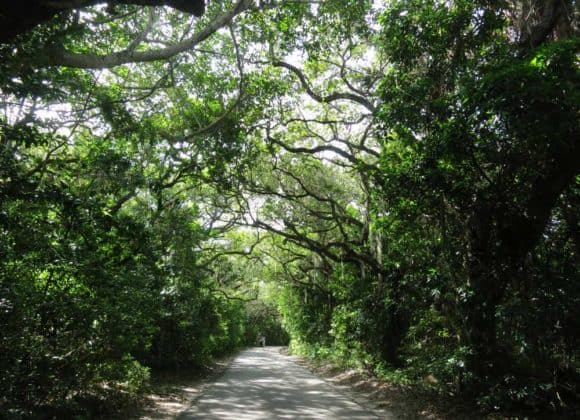 Given that my county, Broward, is so paved and urban, Birch State Park is a precious island, preserving just a sliver of the natural splendor that once was everywhere. And the saga behind the park – the story of Hugh Taylor Birch, the man who fell in love with this land and gave it to us – is inspiring.

While you’re here, it makes a great day to pair a visit to Hugh Taylor Birch State Park with the nearby Bonnet House, a historic home built by Birch’s art-loving daughter and her husband on land he gave them. 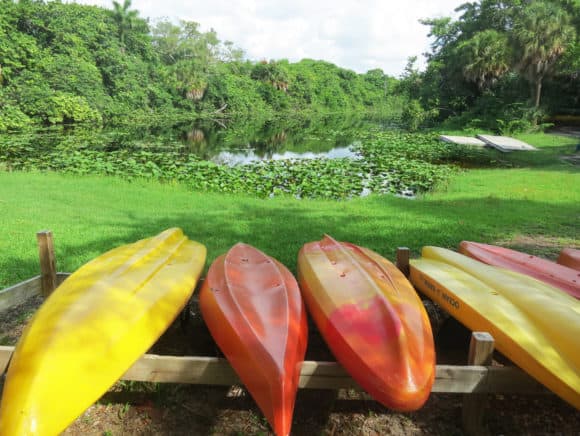 What to do at Hugh Taylor Birch State Park

Birch State Park packs a lot into its 180 acres. Highlights of the park’s features and activities include:

The beach. Birch originally owned 3.5 miles of beachfront land. In essence, Fort Lauderdale owes its open beach vista with extensive public access to him. The beach at Hugh Taylor Birch State Park is indistinguishable from the rest of Fort Lauderdale beach. It’s all lined with a beautiful wavy white wall and a paved walkway along A1A. If you enter Hugh Taylor Birch State Park, there is a parking lot near the beach, and you can use a tunnel under A1A to reach the sand and surf. 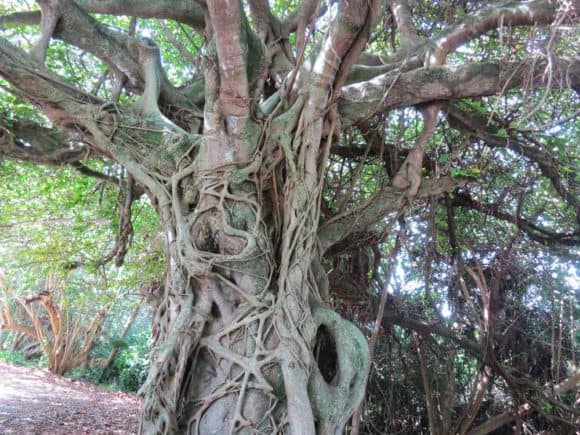 Strangler fig tree at Hugh Taylor Birch State Park in Fort Lauderdale. One thing to look for in this iconic tree: Do you see where the roots form a heart? And above that, the number 4?  The tree is located near the beach entrance. (Photo: Bonnie Gross)

The 1.9-mile paved loop road through the park. While cars use this one-way road too, it has slow, minimal traffic and is a good place for bicyclists, walkers and in-line skaters. You can rent bikes in the park. The first section of the road goes through the shady hammock. It then loses a few feet of elevation to continue through mangrove swamp as it parallels the Intracoastal.

There are great views of the wide Intracoastal Waterway here, with picnic tables, good fishing and a water taxi stop. People like to park here, picnic, read and just watch the passing boat parade.

The last segment of the road is the most beautiful: It passes through a section of ancient live oak trees covered with resurrection ferns and airplants, forming a canopy over the roadway.

Guided activities. The parks offers regular interpretive walks and tours. These are free. You also can tour the park on a Segway with groups through the concessionaire.

Park & Ocean, a restaurant, serves craft beers and food in a wood-paneled restaurant built into the park’s entrance at A1A. This was the historic location of a popular cafe from the park’s heyday. It has picnic tables and chairs outdoors under the shade of seagrape trees overlooking the park’s beach as well as indoor seating. It’s a gorgeous setting to relax with a beverage.

The story of Hugh Taylor Birch

Imagine Fort Lauderdale beach in 1898 with no buildings and no roads and no residents.

Nope. I can’t do it either.

The world Hugh Taylor Birch found here is lost to us. But he loved it and saved a tiny piece for us.

He was a successful lawyer from Chicago, general counsel for Standard Oil Company, a man with a home on Chicago’s prestigious Michigan Avenue. But he loved nature and yearned to get away from city life.

On a trip to Florida to stay with Henry Flagler, the founder of Standard Oil and the builder of the Florida East Coast Railway, Birch sailed south and found this area when it was largely wild and uninhabited.

Between 1894 and 1920, he purchased hundreds of acres of land between the ocean and the Middle River for between $1 and $4 an acre. 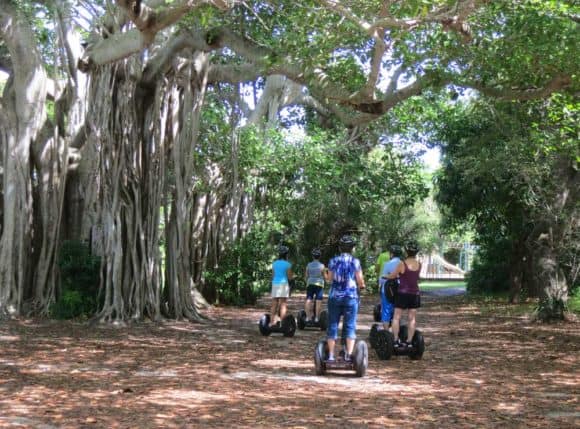 Eventually, he gave some land to his daughter, Helen. She and her husband Frederick Bartlett, built a house that is now across Sunrise Boulevard called Bonnet House. Hugh Taylor Birch lived there for many years.

In 1940, when he was 90, he finally had a house overlooking the beach built for himself. Two years later, recognizing how precious his property had become in the growing City of Fort Lauderdale, he donated 180 acres and three miles of beautiful beach to the state of Florida to be preserved forever as a public park. He died in 1943. The park opened in 1954. His home is now the park’s visitor center and offers exhibits and animal displays. 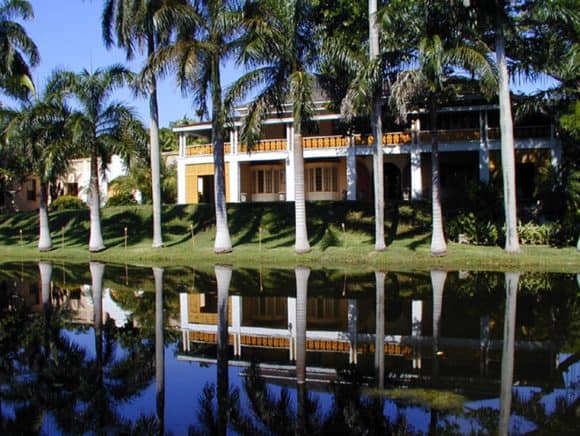 On the south side of Sunrise Boulevard, tucked away surrounded by colorful gardens with wild spider monkeys, wading birds and swans, is Bonnet House, a whimsical tropical estate listed on the National Register of Historic Places.

Built by Helen Birch and Frederick Bartlett in 1920, it’s a 35-acre oceanfront estate designed by artists as a place to live the good life in winter.

Helen and Frederick Bartlett were great art collectors. If you have visited the Chicago Art Institute and the priceless Post-Impressionist paintings by Matisse, Picasso, Seurat, Cezanne, Van Gogh, Gauguin and others, then you can appreciate their taste. These were all paintings collected by the Bartletts and donated to the Art Institute in the 1920s. (This was before this art was fully appreciated; it was several years before the opening of New York’s Museum of Modern Art.)

The unpretentious estate includes Frederick Bartlett’s art studio and is full of sculpture, paintings and orchids. The grounds are landscaped with beautiful tropical vistas. To visit, you must take a guided tour.