Throughout our state, tucked away in remote enclaves, you’ll find hundreds of little-known wetlands, forests and wilderness areas waiting to be discovered and explored.

Visitors to these areas are often greeted by inconspicuous signage and understated recreational features.

A shady primitive campground nearby has picnic tables, fire rings but not much else.

After a recent rain during the winter “dry season,” I navigated a succession of puddles along the Bluffton Interpretative Trail, saved from some by occasional boardwalk crossings.

The trail is a real sampler of the forest environment. Be sure to pick up the hiking guide from a trail box before starting out. 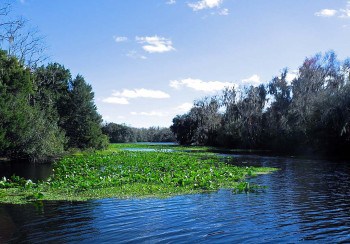 Paddle into the wilderness

Launching a kayak or a canoe from shore requires a little wading through reeds, but you’ll have direct access to the St. John’s River. I didn’t have my kayak when I visited, but it looked like there are plenty of beautiful tributaries to explore.

Paddle south of the launch area to Lake Dexter and the Lake Woodruff Wildlife Refuge. Paddle north through the community of Astor to Lake George.

Access Bluffton from State Road 40, just east of the St. John’s, on unpaved St. John’s River Road that looks like it’s an entrance to a small cattle ranch. After passing a few houses, you’ll see the forest entrance. 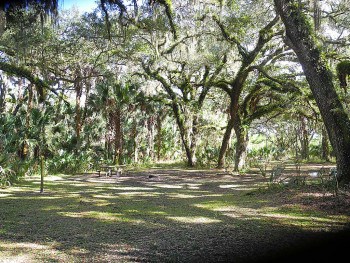 This small campground may be the best-kept secret in Volusia County.

“Lake George State Forest does not get many campers in general, even for events (in Daytona),” says Cathy Lowenstein, the forest’s resource administrator.

Part of the reason few people camp here may be the inconvenience of getting the required permit from the DeLeon Forestry Station in DeLeon Springs, about 20 miles away. The campground gate is locked, and you won’t get the combination until you get the permit.

There are no on-site caretakers or rangers, and there are only four sites clustered beneath a canopy of oaks. Each of the four shady campsites has a picnic table and a fire ring, and they can accommodate tents or RVs. There are no hookups or dump station, but there is a porta-potty in the campground.

Campers should also be aware that parts of the campground may flood after a heavy rain, especially during the summer wet season. 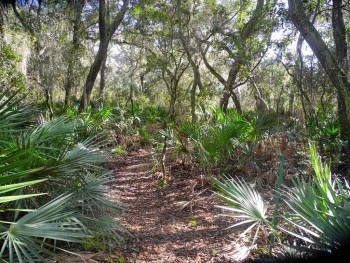 About 70% of the forest is managed for its timber, and you’ll see stands of long-leaf and slash pine in various stages of growth, much of which reforested after wildfires swept the area in 1998.

The remainder is natural hardwood swamp, beautiful but subject to flooding.

Hiking, horseback riding and bicycles are allowed throughout the forest, but you will have to park at one of two access points unless you get a permit.

On the west side of the forest, turn off St. John’s River Road onto Bluffton Road to the gate, where trails and logging roads will take you to Jenkins Pond and other parts of the forest interior.

On the east side of the forest, the Fawn Road Entrance is just off County Road 3, which runs parallel to U.S. 17.

You are allowed to drive on the forest’s interior logging roads, but you’ll need a permit (no cost), which you can obtain over the telephone by calling the forest station at 386-985-7817.

Note: The northern section of the forest, known as the Astor Tract, has a network of logging roads that are openly accessible. Drive north of State Road 40 on St. John’s River Road to enter this portion of the forest, which is primarily logging forest with some residential pockets and, frankly, unexciting. I did notice that almost every vehicle I encountered here had a kayak on its roof, so I suspect there is public access to the St. John’s and Lake George, although all I found was a private launch.

Wildlife: Bears, birds and other critters

On the eastern border of Ocala National Forest, you can bet this is black bear country, so be alert. While it’s unlikely you’ll encounter wildlife, watch for tracks along trails for bear, deer and wild turkeys.

Butterflies are a common site, and this forest is home to several species, including the red-banded hairstreak and zebra long wings, which is Florida’s state butterfly.

If you sit still for awhile, you may even see a rare swallowed-tail kite, a member of the hawk family that makes its home in the nearby Lake Woodruff National Wildlife Refuge.

Lake George State Forest is considered an ideal location for beginning bird-watchers because of its ecological diversity and proximity to wildlife refuges and large bodies of water.

As a result, it is a featured destination on the seemingly random Great Florida Birding Trail, which really isn’t a trail but a program that identifies trails where birds can be observed.

Here is the program’s guide to Lake George State Forest

5 Things to Do in Ocala National Forest

Back to Nature: 10 Campgrounds Near Daytona