Florida’s holiday season is on the rebound for 2021 as communities across the state prepare for their annual Christmas and Holiday Boat Parades.

Use links provide in the listings to find the latest information about your favorite lighted boat parade.

The dates you see below are dates when the boat parades are expected to be scheduled based on past years to help with your planning. When dates are confirmed, they wlll be tagged with a green confirmed. This calendar will be updated frequently between now and the December holidays.

Jacksonville Light Boat Parade and fireworks show can be clearly viewed from the north and south banks of the St. Johns River. The parade route will begin at the Hyatt Regency Riverfront Hotel and follow the Northbank Riverwalk to the Fuller Warren Bridge. The parade will then cross to the south bank and follow along the Southbank Riverwalk to the Duval County School Board building. Parade, 6 pm; Fireworks, 9 pm.

Tarpon Springs Illuminated Boat Parade. Vessels will proceed down the Anclote River and into the bayous where Santa will give out treats. Your best bet for viewing these holiday decorated vessels is from Craig Park/Spring Bayou. The event is free and boats are expected to enter Spring Bayou around 8 p.m.

Dunedin Holiday Boat Parade, Decorated boats parade through the Dunedin Marina and Edgewater Park. Santa to arrive by boat for the lighting of the city’s Christmas tree. (First Saturday in December) 6-9 p.m.

Fort Myers Beach Boat Parade. The parade begins at Salty Sam’s Marina and will pass though Matanzas Harbor and the first two canals of Siesta Isles. The hammerheads at the end of those canals are a great spot to set up a lawn chair to watch the event. Another good viewing location is the fountain next to Nervous Nellies. Starts at 6 pm.

Mount Dora Lighted Boat Parade, Downtown Waterfront and Donnelly Park, beginning at the Lighthouse across from Gilbert Park on Tremain Street and Liberty Street. 7:30 p.m. Note: Although the parade is scheduled, Light Up Mount Dora has been cancelled.

Palm Beach and Jupiter Holiday Boat Parade, North Palm Beach to Jupiter. The parade begins at North Palm Beach Marina on Marina Drive, traveling north along the Intracoastal Waterway to the Jupiter Inlet Lighthouse. Sponsored by the Marine Industries Association. Benefits Toys for Tots. The toy drive by land and by sea collects thousands of toys each year. A “toy fleet” of boats from Tow Boat, Sea Tow, and other volunteers traveling along the parade route will make convenient dockside pickups during the parade. Just wave a flashlight when you see a boat with a flashing amber beacon and/or Toys for Tots signage. 6-9 pm.

Palm Valley Boat Parade. Starts one mile south of the Palm Valley Bridge (CR 210) and proceeds north to the last home in Marsh Landing, approximately 7 miles. Viewing near the bridge, or at the end of Canal Street, Mickler’s Wharf, or restaurants along Roscoe Blvd. Begins at 6 pm and reaches the final viewpoint by 9:30 pm.

Martin County/Stuart Christmas Boat Parade. Will begin on the East side of the Jensen Beach Causeway at 6 pm and proceed to Sandsprit Park and into the Manatee Pocket where we will end at the Twisted Tuna at 7:45 pm and announce the winners. The event is free for spectators and participants.

Treasure Island Holiday Boat Parade. Features boats of all kinds making it the biggest lighted boat parade in Tampa Bay.  Boats will depart from The Club at Treasure Island at 6:20 p.m., sail past the Treasure Island Causeway Bridge at 7 p.m. and end at 8:15 p.m. at John’s Pass.

Destin Harbor Lights Boat Parade, Visit with Santa Claus starting at 1 pm at HarborWalk Village’s Main Stage then enjoy a special performance of the Nutcracker from the Ballet Conservatory of the Destin School of Music & Dance at 4:45 pm. The Boat Parade will light up the harbor beginning at 6 pm with fireworks following the parade.

Boynton Beach/Delray Beach Holiday Boat Parade. The parade begins at Boynton Beach Inlet and proceeds south along the Intracoastal Waterway to the C-15 canal. Some of the best spots for viewing at Boynton Harbor Marina (Two George’s Restaurant and Banana Boat), Intracoastal Park, Jaycee Park and in Delray Beach you can see the parade at Veterans Park and Knowles Park. Bring a new, unwrapped toy for Toys for Tots. 6:30-9 pm

Pompano Beach/Lighthouse Point Holiday Boat Parade. Lake Santa Barbara north to Hillsboro Blvd. Bridge. This is the longest running holiday boat parade in the nation and the second year the boat parade is being held on a Friday night. 6-9 p.m.

Carabelle Holiday Boat Parade of Lights. Along the Carrabelle River, east of Apalachicola on U.S. 98. Followed by a fireworks show.

Clearwater Holiday Lighted Boat Parade. Festively decorated boats will parade past Coachman Park around 8:30 p.m. From there, the fleet will cruise under the Memorial Causeway Bridge turning into the Clearwater Marina Channel, then proceed south through the navigable canals to Clearwater Point. Free and family-friendly!

Festival of Lights Illuminated Boat Parade in Madeira Beach. 6:45 pm. 52nd annual Boat Parade will kick off at John’s Pass with a shop local holiday extravaganza, tree lighting, and boat parade kickoff party. Head to ROC park for the best view of the parade and to enjoy holiday music, food, and spirits.

. Gulfport Holiday Boat Parade. The 35th annual parade presented by the Boca Ciega Yacht Club will kick off at 6:00 pm. Parade-goers can get a good look from Gulfport’s Williams Pier and the beach near the Gulfport Casino. Free and family-friendly!

New Smyrna Beach Boat Parade. The parade will start at dusk in Edgewater near marker 53 (lighted) and continue north to Riverside Park in NSB. Vessels will then proceed to the north side of Chicken Island along the North Causeway, east to the Grille at Riverview, south towards Bouchelle Island, and then west parallel to Bouchelle Island back toward Riverside Park. Edgewater and New Smyrna Beach are hosting events at their respective parks. Spectators can also see the parade along Riverside Drive, Smyrna Yacht Club, Riverside Park, Anglers’ Yacht Club, NSB Boat & Ski Club, Outriggers Tiki Bar & Grille, The Grille at Riverview, & Bouchelle Island Condominiums.

Palm Coast Christmas Boat Parade, Departing at 6 pm from Cimmaron Basin south on Intracoastal Waterway, turning at the Grand Haven gazebo back to Clubhouse Waterway. The Parade will pass the Tidelands, Marina Cove, and the Palm Coast Legacy Vacation Resort. It will then proceed under the Hammock Dunes Bridge along St. Joe’s Walkway and Canopy Walk, pass by Waterfront Park, Grand Haven, Island Estates, the Hammock, and Yacht Harbor Village before disbursing at the Clubhouse Waterway.

St. Augustine Holiday Regatta of Lights 6 pm. 39th year held on the bayfront north of the Bridge of Lions. Reflects the maritime heritage of the Oldest City and is in keeping with St. Augustine’s historical seaborne image. Hosted by The St. Augustine Yacht Club. Sailboats, sport-fishermen, trawlers, shrimp boats, and many other vessels take part. For best viewing, sit along the bayfront by the seawall or enjoy the view from the many restaurants that face the bay.

Boca Raton Boat Parade. 6:30-8 p.m. Parade along the Intracoastal Waterway from Delray/Boca line south to Hillsboro Boulevard Bridge in Deerfield Beach. Free bleacher sitting areas will be set up at Red Reef Park, Silver Palm Park and at Wildflower Property where you can enjoy a variety of food and drinks from local vendors. Also cancelled is the holiday tree lighting in Mizner Park.

Redington Beach and Indian Shores Holiday Boat Parade. From the Tom Stuart Causeway to Caddy’s Pub restaurant in Indian Shores. The parade kicks off at 6 p.m. Prizes will be awarded after the parade that evening at Caddy’s Pub, 20025 Gulf Blvd, Indian Shores.

Lake Osborne Holiday Boat Parade, Lantana. 7:30 pm. Starting at the Lakeside Anchor Inn, 2412 Floral Rd, near Hypoluxo Road at 7:30 pm, arriving at the area of Lantana Road and Lake Osborne Drive at 8 pm. The boats will continue north to the Lake Worth Road boat ramp, then loop around the entire lake. Great viewing areas in John Prince Park and the campground area.

Cape Coral Holiday Boat Along, 5:30-9:30 PM pm at Four Freedoms Park on Cape Coral Pkwy, the festival has food, Christmas music, a family movie on the big screen, and a visit from Santa Claus along with the parade. You can also watch as the boats line up in Bimini Basin for the parade, which first passes by the park’s beach before heading down various canals in South Cape Coral. Bring lawn chairs.

Tampa Riverwalk Lighted Boat Parade. Along the water at the by Davis Island, Harbour Island and the Channelside District. Parking is available at several public parking lots.

If you have corrections or additions to this listing, please send them to floridarambler@gmail.com or add them in comments below.

Thanks to Alexa Hogan, Bonnie Gross and others for contributing to this report. 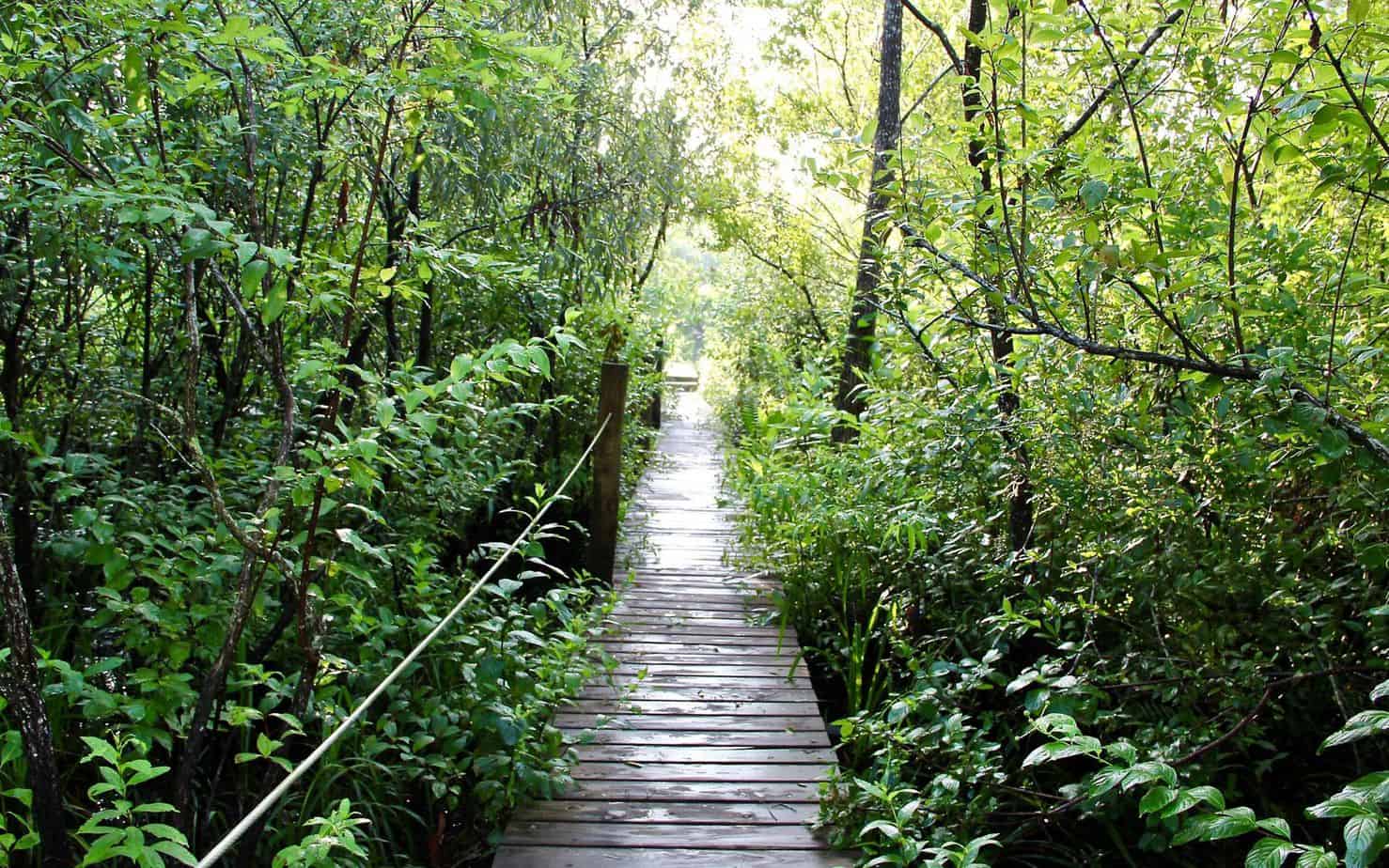 […] parades to choose from. For all the details, check the Florida Rambler’s thorough and updated list of holiday boat parade events proceeding as planned this year as well as ones that have been postponed to […]

Hi Bob: I am reaching out to you today in regards to the Calendar of Florida’s 48 Holiday Boat Parades. We are grateful that our boat parade was included us in your report, thank you! I would like to provide with correct information about the parade, see below:

The 26th Annual Palm Beach Holiday Boat Parade and 21st Annual Toy Drive supporting Toys for Tots and Little Smiles is set for December 5, 2020. The parade will feature dozens of holiday-themed boats and yachts led by a fireworks display traveling on the Intracoastal Waterway from North Palm Beach to the Jupiter Inlet Lighthouse.

The unique toy drive by land and by sea collects thousands of toys each year. A "toy fleet" of boats from Tow Boat, Sea Tow, and other volunteers traveling along the parade route will make convenient dockside pickups during the parade. Just wave a flashlight when you see a boat with a flashing amber beacon and/or Toys for Tots signage. The uniformed Marines and volunteers will pull right up to your dock to collect donations.

Hello! Can you please tell me if you know which boat parade goes down the Caloosahatchee River and what evening it might be scheduled? Thank you so much!

What happened to St Pete Beach boat parade? It’s not even showing as cancelled. Thanks.

The St. Pete Beach boat parade was scheduled last year but inclement weather forced its cancellation and was not rescheduled. I heard it was not going to run this year. (It has not been combined with the Treasure Island boat parade).

We haven't heard a word about the St. Pete Beach boat parade in over a year. My guess is that it was folded into either the Treasure Island or John's Pass parades, but we really have no idea what happened ot it.

INCORRECT DATE! The 35th Treasure Island Holiday Lighted Boat Parade is scheduled for Saturday December 5, 2020 (NOT the 11th, as indicated in this article).

Thanks. We made the correction.