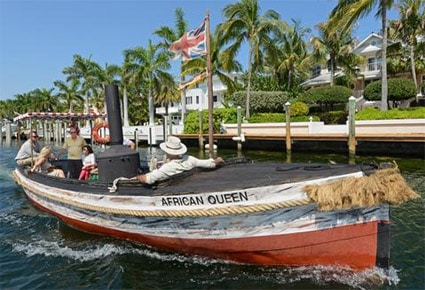 The African Queen boat, the actual steamboat used in the 1951 movie of the same name, attracted Humphrey Bogart fans in Key Largo, even when it looked forgotten, sadly tied up next to the Holiday Inn with only a small sign.

Today, the boat has been beautifully restored and is taking visitors on Key Largo cruises. Fans of the classic John Huston movie starring Humphrey Bogart and Katherine Hepburn can take 90-minute cruises on Key Largo canals or two-hour dinner trips on Friday and Saturday nights. 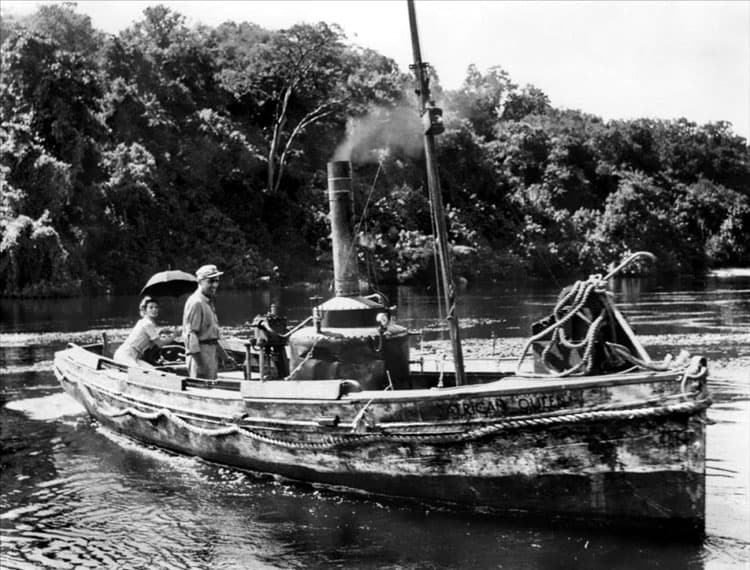 Katherine Hepburn and Humphrey Bogart on the African Queen boat, the same one now in Key Largo.

The African Queen boat started her career playing a role much like it did in the movie – shuttling cargo, missionaries and hunters on the Ruki River in the Democratic Republic of the Congo.

The African Queen boat came to Key Largo in 1983 after knocking around San Francisco, Oregon and then Ocala. Late attorney (and Bogart buff) Jim Hendricks, Sr. rescued the boat from an Ocala cow pasture. 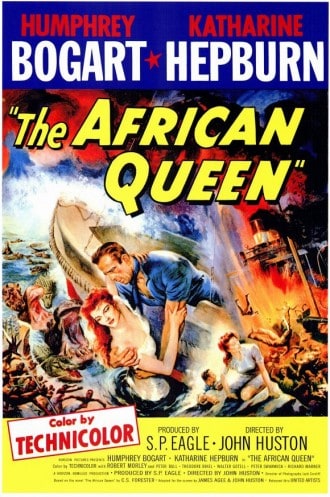 For several years, visitors could take rides on the boat. But when the engine broke in 2001, the African Queen wasn’t repaired.

A few years ago, the owner, the son of the man who brought the boat to Key Largo, leased it to Captain Lance Holmquist and Suzanne Holmquist, who invested $70,000 in restoring the vessel, registered as a national historic site, and now operate it.

The refurbished African Queen boat began sailing again in 2012  — just in time for its 100th birthday (which it shares with a less lucky vessel, the Titanic.)

Cruises aren’t cheap — -probably best for true fans who have always yearned to sit exactly where Katherine Hepburn and Humphrey Bogart did.

The cruise, though, is a very intimate affair. The boat is licensed to take only six passengers out at a time.  (Eventually, the operators want to get licensed for a few more.) As a result, if you’re intent on going, it’s good to book in advance so as not to be disappointed.

And if you just want to see the African Queen, here’s a fun way to spot it: Have lunch at one of our favorite tiki bars in the Keys, Skippers Dockside, 528 Caribbean Drive, Key Largo.

While you sip your rum drink or craft beer at Skippers, you may get to see the African Queen steam by and toot its iconic horn. It’s moored a few boats down the canal from Skippers and you can stroll by and see it after you eat. (Here’s more about Skippers and other tiki bars.)

It made sense to bring the African Queen boat to Key Largo: The city has been associated with Humphrey Bogart and Lauren Bacall ever since the film noir movie Key Largo became a 1948 hit. The film, though, was shot at Warner Brothers Burbank Studios, including only a few establishing shots of the Seven Mile Bridge, the Overseas Highway and Key West. Bogie and Bacall were never on location in Key Largo. 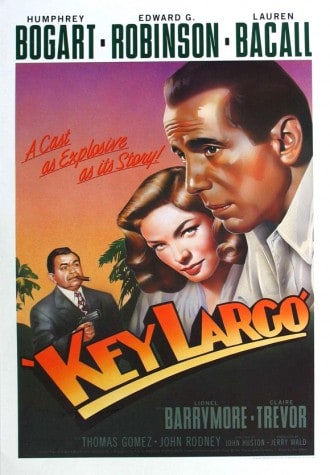 The exterior of the Caribbean Club in Key Largo, at Mile Marker 104 bayside, however, is used in the film. This classic waterfront bar makes maximum use of that connection and is plastered with movie memorabilia. (Yelpers like it, calling it the quintessential dive bar.)

The whole island, however, actually cashed in on the Key Largo movie. The island post office had been known as Rock Harbor. After the movie, area businesses started a petition drive to change the post office name to Key Largo, according to Joy Williams’ The Florida Keys: A History & Guide. It took a few years, but in 1952, the postal service obliged and changed the name to Key Largo.

Fun fact: The story of Key Largo involves an impending hurricane and in the movie, the Lionel Barrymore character talks about the deadly 1935 Labor Day hurricane, which is memorialized in the nearby Hurricane Memorial  you can visit at Mile Marker 82 in Islamorada.

More things to do in Key Largo and the UpperKeys

For a full menu of Florida Rambler articles about the Florida Keys, bookmark this URL: https://www.floridarambler.com/category/florida-keys-getaways/ 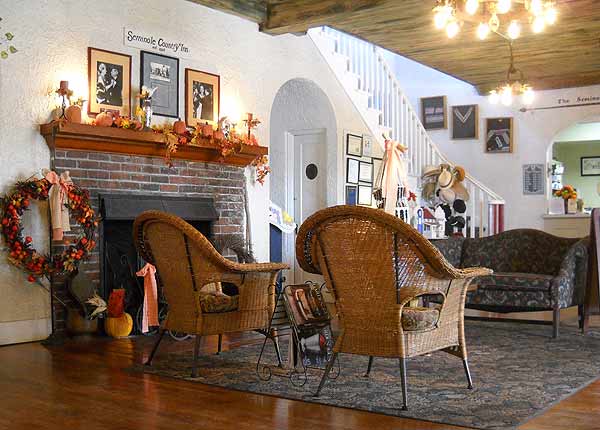 […] steamboat from another of his films, The African Queen (1951). Beautifully restored, today, the African Queen and its crew take visitors on 90-minute day cruises and two-hour dinner cruises in the Key Largo […]

[…] you watch fishing charters and diving boats come and go. If you’re really lucky, you might see the African Queen, the actual boat from the 1951 Humphrey Bogart movie, steam by and toot its iconic horn. It’s […]