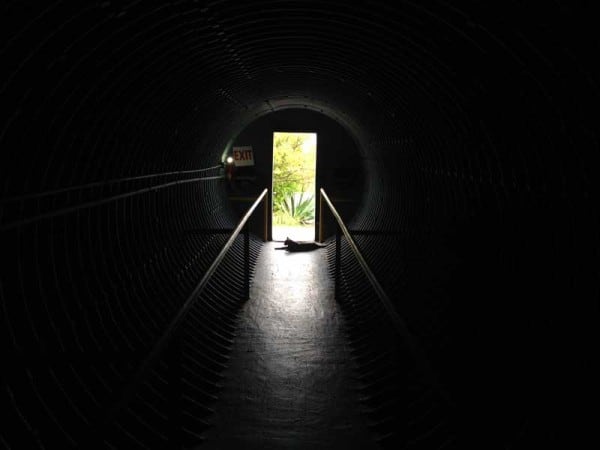 When it was open for tours, you entered the Kennedy bunker through a tunnel. The cat at the end is either Jack, Jackie or Marilyn, the three feral cats who lived on the island. (Photo by Erin Blasco)

UPDATE: The Kennedy Bunker closed indefinitely in October, 2017. The non-profit that managed the facility lost its lease with the county after several years of conflict. The county has not determined the future of the facilities, but restoring them will cost millions, according to a report in the Palm Beach Post. What follows is an earlier story about touring the bunker when it was open to the public. We’ll update the story as Port of Palm Beach, which now has custody of the site, determines its future.

Hidden on an island best known for boats and bikinis is a fascinating relic of another era in South Florida —  the Kennedy Bunker,  the underground fallout shelter built in December 1961 as a safe haven for President John F. Kennedy, whose family’s Palm Beach compound is minutes away across the water. 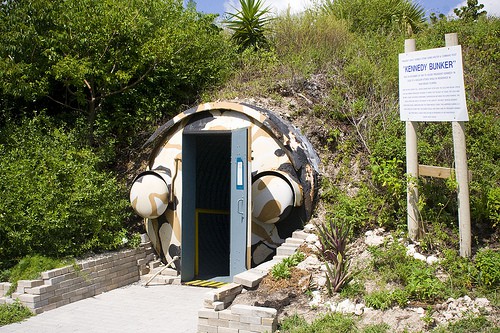 The bunker was constructed quickly and secretly during the run up to the Cuban Missile Crisis. Hidden in the woods and underground, it fell into disrepair until restored by the museum in 1999. Inside the Kennedy Bunker, the president’s desk would be equipped with the red phone, a hotline to Moscow.

The bunker is located on Peanut Island, a Palm Beach County park accessible only by boat, that is usually surrounded by partiers on boats.

The bunker is the real deal. The museums site says: “With the exception of a presidential seal, added as a modern enhancement, the declassified, decommissioned bunker is very close to the original. The structure is covered with earth and many layers of concrete and rebar. Entry is via a blast-hardened tunnel, with a 90 degree angle to minimize shock effects from a nuclear explosion. Entry is through a secure decontamination area, which was, however, and interestingly, made of plywood.” 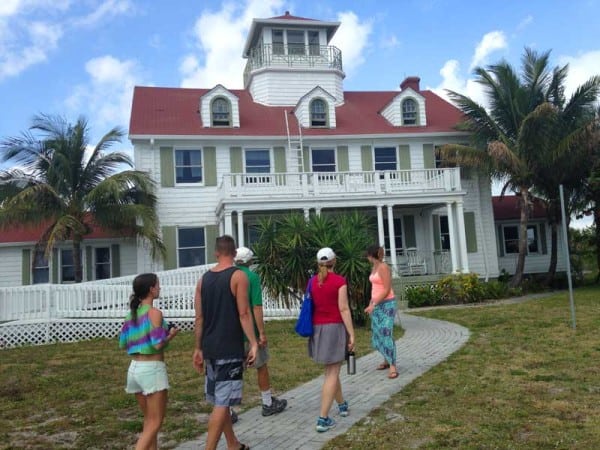 The historic Coast Guard Station on Peanut Island is part of the tour of the Kennedy Bunker.

While a few folks around Palm Beach County know about the Kennedy Bunker and Peanut Island, it still ranks as one of Florida’s hidden treasures. It’s likely to stay that way, however: Since it is located on an island, visiting it will always require taking a water taxi, private boat or a kayak — which is part of why we love it in the first place.

The bunker itself is quite small. Shelves are stocked with containers of drinking water, Army K-rations and gas masks. There’s a rocking chair — the seat of choice for a president with a bad back — and a ham radio reminds us of life before cell phones.

It’s a spooky space. You know that if this bunker were ever actually used, it would be something close to the end of the world. 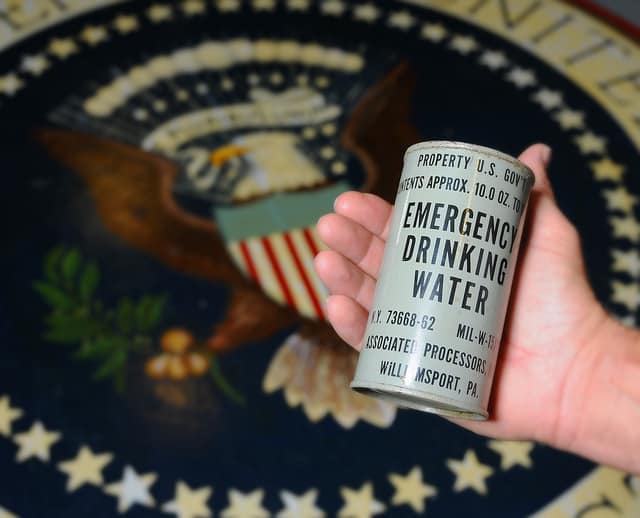 More practical matters, however, are also discussed. There is no bathroom. How would that work?

The answer: You used a bucket, filled it and sealed it.

Before touring the bunker, visitors are taken through the historic Coast Guard Station. The tour is short and modest, but you see some interesting items.

An interesting piece in the New York Times tells how JFK had a similar shelter built on another vacation destination, Nantucket Island. That shelter has never been open to the public. 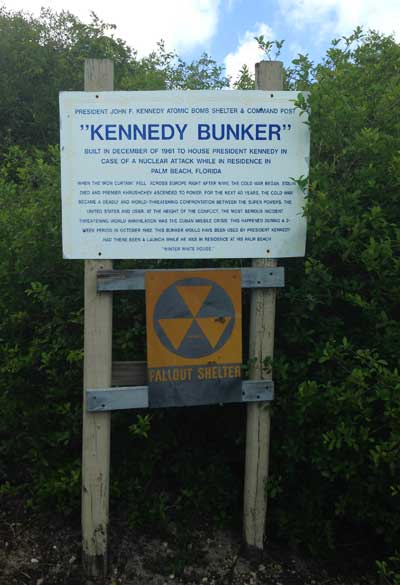 At the entrance to the bunker is a the fallout shelter sign, which will be familiar to Baby Boomers.

Peanut Island is also a great outing for snorkeling, picnics and even camping. For details see the Florida Rambler guide to visiting Peanut Island.

We love leaving from Sailfish Marina because the docks there have clear turquoise water filled with schools of fish — jacks, parrot fish and more. You can buy shrimp here to feed the fish and have lunch or drinks in the restaurant.

The ferry to the island takes about a minute, but it’s scenic and the island beckons to you with its palm trees and boats.

You also can kayak to the island.  To kayak, we parked and put in our boat at Riviera Beach Marina, 200 E. 13th St. Riviera Beach. (You can also rent kayaks and paddleboards at the marina.)

Note: The Kennedy bunker has not been open for tours since 2017.

More things to do in Palm Beach County and nearby: