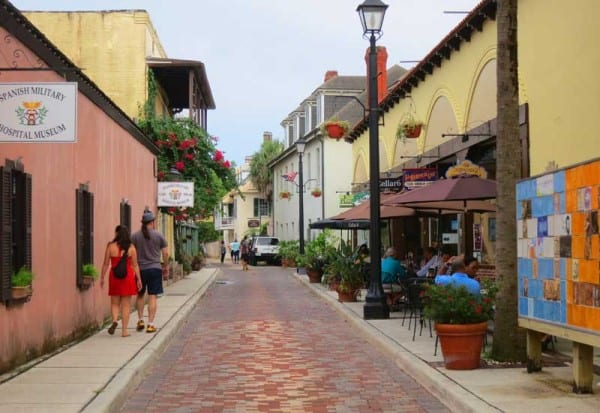 St. Augustine history: The oldest street in St. Augustine is Aviles Street, and it is paved with bricks, not cobblestones. (Photo: Bonnie Gross)

St. Augustine is one of Florida’s most popular destinations and people are often surprised about its history, since US history is dominated by the story of English-speaking people. I love how when visiting, you can discover stuff you didn’t know about the city and Florida.

I learned a lot, and here are five cool little things I discovered about St. Augustine history. 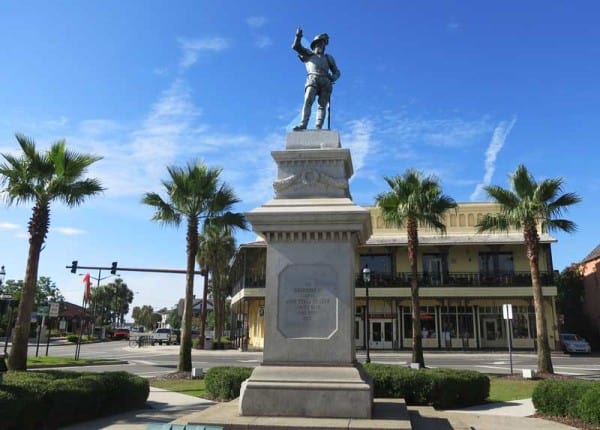 When you visit St. Augustine, you can’t help but soak up the history of the Spanish explorers. It’s everywhere – from the magnificent fort, the Castillo de San Marco, which commands the waterfront, to the narrow lanes that make the historic district so charming.

It all started with Juan Ponce de Leon, the explorer who led the first European expedition to Florida in 1513 and named it. His statue stands at the head of the main street at the harbor, and it would be a commanding presence if it had been built at a monumental size.

The statue, however, is built life size, which means Ponce de Leon is this little guy on a big pedestal.

He was only 4 foot 11 inches tall! (The helmet makes him look a bit taller.)

It was founded by the Spanish, but the pioneers who are still around are the Minorcans

St. Augustine started as a Spanish colony, was handed to Britain in a treaty in 1763, was returned to the Spanish in 1783 and became part of a new U.S. territory in 1821.

In the meantime, a key group of settlers arrived  – folks from Minorca, an island in the Mediterranean off Spain.

If it weren’t for the Minorcans, historians say, St. Augustine probably wouldn’t be celebrating 450 years as the oldest continuously occupied European settlement in America. 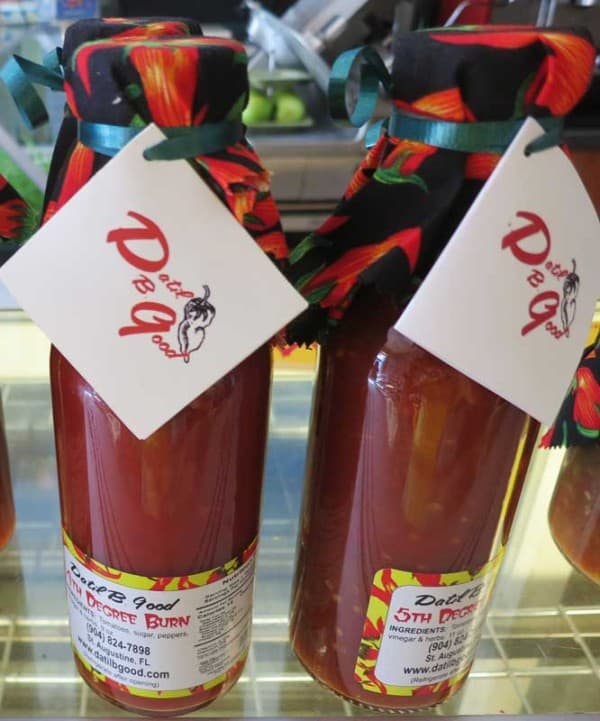 St. Augustine history: St. Augustine made it to its 450th anniversary because early settlers from Minorca persevered. One sign of Minorcan culture is hot sauce made from datil peppers 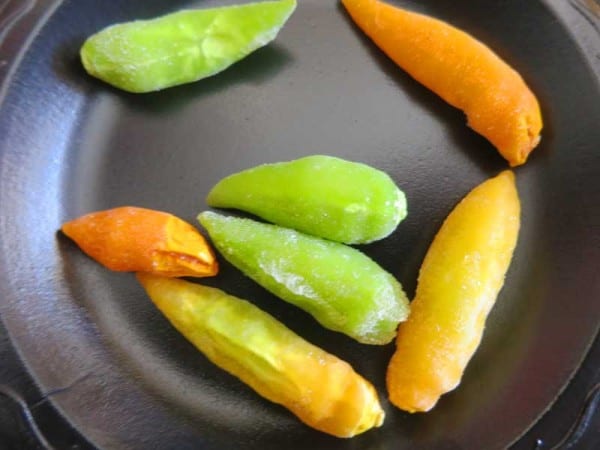 St. Augustine heritage includes people from Minorca, who are known for their love of fiery datil peppers. (Photo: Bonnie Gross)

And the Minorcans are still there.  Many old St. Augustine families trace their ancestry to several hundred Minorcans who came to Florida in 1768 as indentured servants to work on a New Smyrna indigo plantation. When this plantation failed, the surviving Minorcans  (hundreds died of dysentery and malaria) walked to St. Augustine and most never left.

Next time Florida changed hands (when Britain ceded it to Spain in 1783), it is the Minorcans who kept St. Augustine going.

Want to taste a little Minorcan heritage? Many restaurants serve Minorcan clam chowder and St. Augustine relishes the fiery datil pepper. (It’s as hot as a habanero.) While not from Minorca, the Minorcans adopted it centuries ago as their own and use it in a variety of recipes. St. Augustine has a Datil Pepper festival annually in October and many shops sell datil pepper products.

The historic streets are NOT cobblestone 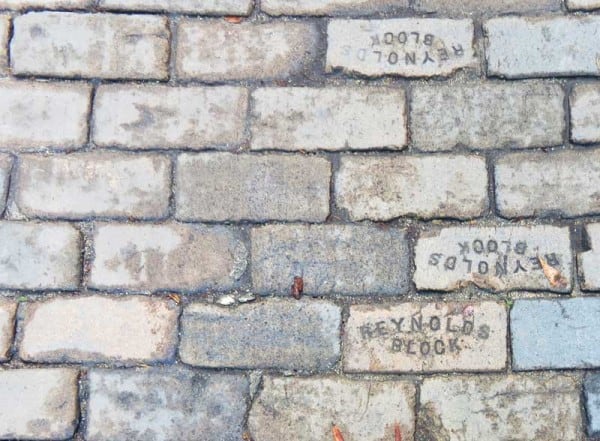 St. Augustine history: St. Augustine takes good care of its old brick streets. When they get too uneven, the bricks are removed, cleaned and put back in place.

One of the most delightful things about St. Augustine history is that so much of the historic old city is preserved. Narrow lanes and alleys are lined with century-old buildings, some dating to when the Spanish first settled.

To folks used to smooth pavement, the uneven street surfaces in the historic district are part of the charm.

“Don’t ever say we have cobblestone. We have bricks!”

When the old bricks get too uneven, the city carefully removes each brick, cleans it up and replaces the very same brick back in the road.

Cobblestones are rounded natural stones. Bricks are rectangular and manmade.

One of those brick streets, Avila Street, is the oldest street in the United States, Harvey says.

St. Augustine was key to the 1960s Civil Rights movement – and the town embraces that history 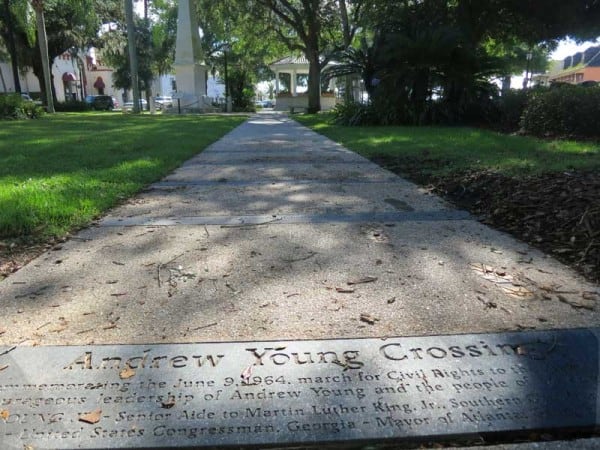 When I think of the Civil Right Movement, places like Birmingham and Selma come to mind. Until I visited, I didn’t realize St. Augustine belongs in that list.

Civil Rights leader Andrew Young led a peaceful march on June 9, 1964, and he was brutally bludgeoned by a white mob. 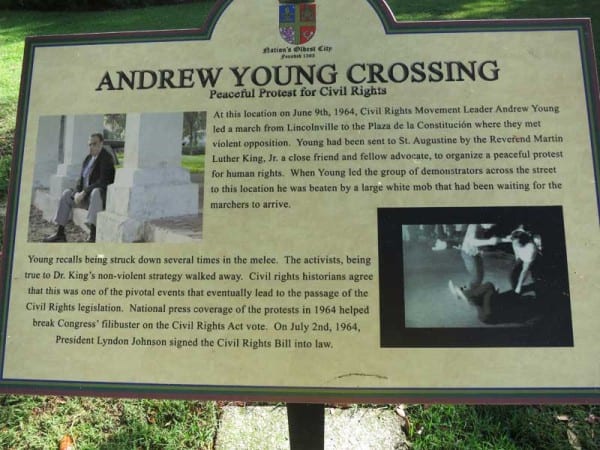 A week later, black and white protesters jumped into a whites-only pool at the Monson Motor Lodge and the manager poured acid in the water to drive them away.

Martin Luther King was arrested on the steps of the Monson Motor Lodge and held in the St. Augustine jail.

Civil Rights leaders, however, say those often horrifying events directly led to the passage within weeks of the landmark Civil Rights Act in July 1964.

Today, to the surprise of some, you hear about these events in St. Augustine history from the cheerful guides on the ever-present tourist trolley tours. You also see monuments and markers at several sites.

There are bronze footprints in Constitution Plaza to mark where Andrew Young marched. The area was renamed Andrew Young Crossing, and inspiring quotes by Young are engraved in the sidewalk near a small monument. (This plaza has always been called the slave market; there’s a historic marker with details.)

Across the street, what is now a Wells Fargo bank branch has a mural marking the site of the Woolworth’s sit-in and the actual lunch counter is preserved inside, complete with the original menu.

The Monson Motel is long gone and a new Hilton is on the site. But the steps where Martin Luther King was arrested have been preserved and are marked with a brass plaque.

The St. Augustine’s Civil Rights story is important, says Dana Ste. Claire, director of heritage tourism for the city, because “it is the story of America.”

Andrew Young Crossing:  The intersection of King Street and St. George Street at the west end of Constitution Plaza.

Here’s a site rich with information about the Civil Rights movement in St. Augustine and the ACCORD Freedom Trail.

There were African slaves in St. Augustine long before the ‘official’ first slave ship to US

In 2019, considerable attention was paid to the 400th anniversary of the first slaves being brought to the New World. (These Africans arrived near Jamestown in 1619.)

But St. Augustine’s settlers had brought slaves to the Spanish colony years earlier. Records show there were 56 slaves in St. Augustine by 1602, according to a story in USA Today. (Black slaves helped build the Spanish fort, Castillo San Marcos in 1672.)

Many story of African Americans in St. Augustine are told by the St. Augustine Black Heritage Tours. Here are reviews on TripAdvisor. 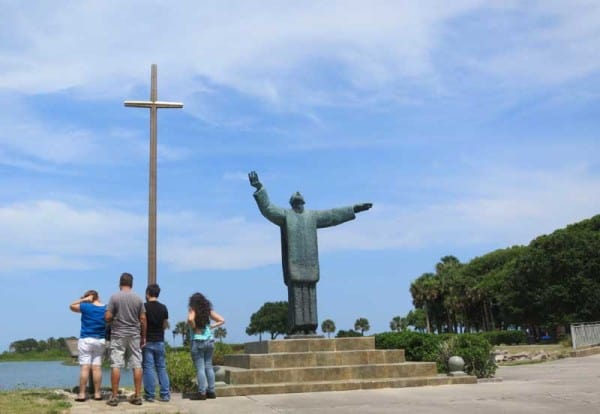 St. Augustine history: The site where Menendez and the Spanish settlers landed is marked with a park. The landing will be re-created here on Sept. 8. (Photo: Bonnie Gross)

When you next update this, be sure to include the Freedom Trail of historic sites of the civil rights movement. One of the few things you can do for free in St. Augustine, it is basically an open air 24/7 history lesson in the most important chapter in the Ancient City's modern history. See where Martin Luther King stayed, where major rallies were held--even the jail which the president of the United States was advised to keep an eye on if he wanted to see what the leaders of the civil rights movement were up to, because so many of them were incarcerated there. Ask at the Visitors Center for a map and brochure. And thank ACCORD, which put together the Freedom Trail and Northrop Grumman which paid for the markers at a time when government here refused to do anything for civil rights. A treasure!

Another Florida State Park that is located in St. Augustine is Fort Mose. It is just 2 miles north of the City center. It has a fascinating history and was key in protecting St. Augustine. I am hoping to go back some day when they do a re-enactment.