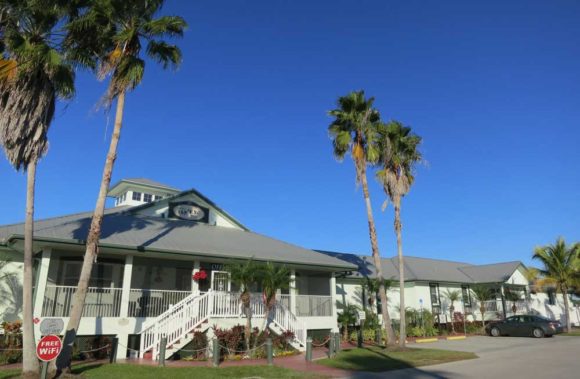 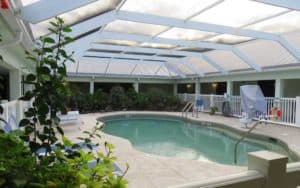 If you’re visiting the western entrance to Everglades National Park and the Ten Thousand Islands, there is a bed and breakfast that caters specifically to kayakers, hikers and outdoor enthusiasts – the Ivey House Bed and Breakfast in Everglades City.

We’ve stayed here twice, once in the historic wing (now closed due to hurrican edamage) and once is the new wing, with modern conveniences and pool-side rooms. 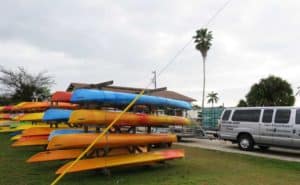 The Ivey House Bed and Breakfast in Everglades City grew out of a successful canoe outfitting business. (Photo: Bonnie Gross)

Ivey House actually is an outgrowth of a successful canoe and kayak outfitting company and is the base for EvergladesAdventures.com, which offers guided trips, equipment rental, livery service and lots of good information.

For example, if you’ve dreamt of paddling the 99-mile Wilderness Waterway from Flamingo to Everglades City (a five- to nine-day trip), Everglades Adventures can provide the transportation between those locales that makes it possible. O

r, if you’ve read Florida Rambler’s article on kayaking the Turner River but don’t own a kayak, these folks can help you do it.

The complex is located near the Barron River in Everglades City, walking distance to three popular restaurants. (Two are seafood houses that are among the most popular places to get stone crabs —Triad Seafood and City Seafood – and the third is Camellia Street Grill, with a more varied menu that does include stone crabs and seafood too.) 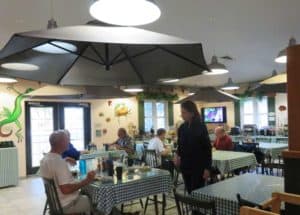 The Inn, which has spacious hotel-like rooms with private baths, has rates that start at $99 off season with January to April rates from $169 to $179 (plus taxes.)

A breakfast buffet is served in the dining room and it offers lots of choices — tasty hot foods, fresh fruits and yogurt, hot and cold cereals, rolls and muffins and a choice of sliced cheeses in the style of B&Bs in Europe.

Rooms are comfortable and the staff goes out of its way to help you have a great experience in the area. The white board in the lobby lists local wildlife sightings, for example, and when we told the desk clerk we were going to kayak the Turner River, he pulled out maps and information about it.

Calling this a B&B might set the wrong expectations. I think of B&Bs as smaller scale operations with individually decorated rooms. The atmosphere is more like a park lodge and based on the conversations and accents heard at breakfast, Ivey House appeals to an international clientele.

The history of the Ivey House

The Tamiami Trail (pronounced tammy-ammy and standing for Tampa-Miami) is the southern-most link between the Atlantic and Gulf coasts. This road through the swampy, buggy, alligator-filled Everglades was not easy to build. While begun in 1915, the project was delayed by a world war, hurricanes and a land bust. Eventually, it took real estate developer Barron Collier’s funding to get the road built and it was completed in 1928.

After the road opened, Earl Ivey, who had operated the huge dredge that dug the Tamiami Trail, and his wife Agnes, ran a boarding house in the building – until she died in 1974!

For a few years after that, the building was the Beckett Academy, a school for troubled children that offered a program of wilderness activities.

Men who stay in the historic lodge will see evidence of the building’s use as a school — the curious men’s bathroom with stalls built more at a child’s scale.

In 1978, the current owners bought the school and the Ivey House began its transformation to a bed and breakfast and eco-tour provider. In 2001, the inn with its swimming pool and the lodge lobby and dining room were completed.

Things to do in Everglades City area

We love visiting Everglades City, a small fishing village with fresh seafood and historic buildings and proximity to so many outdoors adventures. 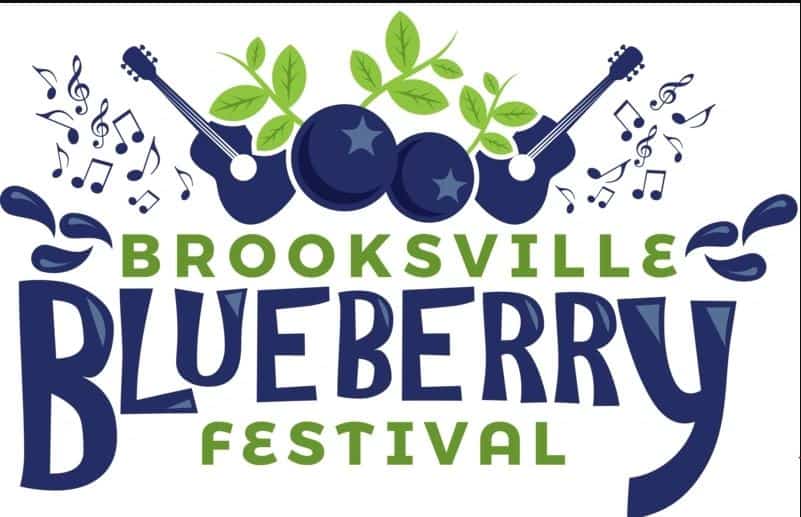 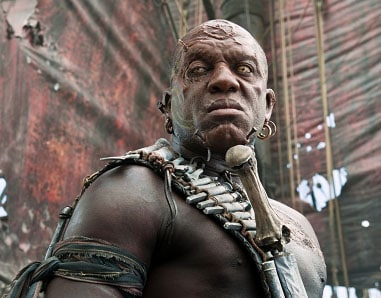 Next
The Legend of Black Caesar still haunts the Florida Keys