With a name like Hell’s Bay Canoe Trail, it’s not surprising that it took me so long to get around to this kayak trail.

After years of visiting, I made a late-April trip to Everglades National Park and decided to paddle this out-and-back trail, thinking it would be perfect for a hot, sunny day — shaded by mangrove tunnels. 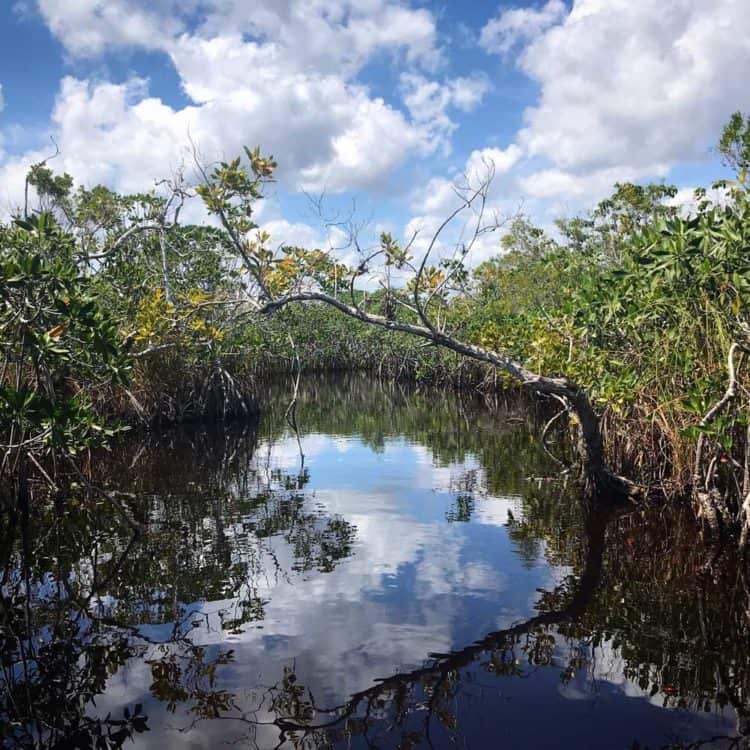 My take-away: Hell’s Bay kayak trail has some pretty scenery, serene wilderness, not a lot of wildlife, very little shade and the tight twists and turns make it slow-going and a challenge to navigate.

The trail starts on the north side of the main park road about 10 miles before your reach Flamingo. There is room to pull off and park along the road and a small dock, where you access the trail via a pond with shallow, clear, tea-colored water. 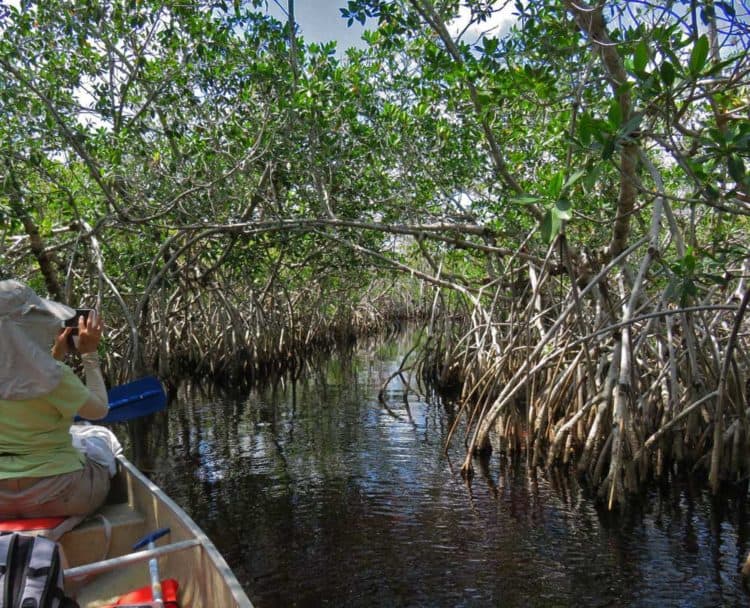 Thank goodness for the white PVC pipes marking the trail. Spotting them is a bit of a game on this trip – when you face three equally possible passageways through the mangroves, you guess which one is the trail and then watch carefully for confirmation of a white PVC pole. If you’re wrong – and we were on several occasions – it’s turn around or sometimes back out and try another route.

The downside to Hell’s Bay Kayak Trail is that the scenery is unchanging: a vast mangrove forest where one passageway looks a lot like every other. On our spring visit, the vivid flowering airplants were a treat,  the main variation on the theme. Also, we did not see much wildlife – a few osprey hunting overhead were the highlight. There were no alligators to be seen. They prefer having river banks where they can haul out and sun, and there is little open land in a mangrove forest.

The park’s brochure says you can do the whole trail, 11 miles round-trip, in a “leisurely” six to eight-hour paddle. No way! At least, not for me and my husband. We paddled a third of the trail and back—about four miles — and spent three to four hours doing it. At that pace, the 11 miles would take us nine or 10 hours.

Would I recommend Hell’s Bay trailkayak ? It’s definitely an intriguing trail if you were heading for a back-country camping experience at the Hell’s Bay Chickee or the Pearl Bay Chickee. (To camp, you need a back country permit, which you can get no earlier than one day in advance at the Flamingo Visitor Center. The campsites are raised platforms with portable toilets in the middle of Everglades wilderness.)

If you’re just looking for a day-trip in the national park, I would suggest the nearby Noble Hammock trail, which is similarly narrow and twisting through mangrove tunnels, but is a 1.9 mile loop. That might sound short, but that loop is probably just the right length of time to spend in a mangrove forest. Here’s a You Tube video of the Noble Hammock Trail: 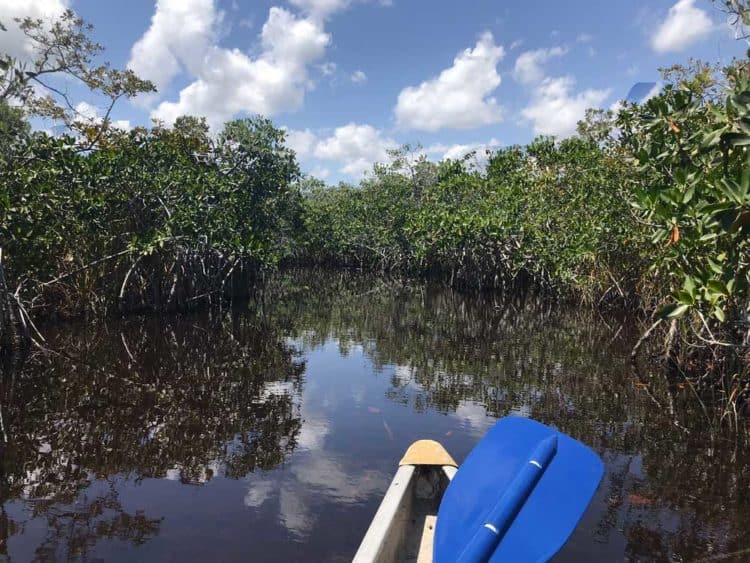 Both trails have the advantage of being sheltered if it’s a windy day and both are tight enough that kayakers will need to break down their paddle into two sections and use them like canoe paddles in narrow spots.

Other Everglades National Park kayak trails are more open, through larger lakes, which have the disadvantage of being windy at times. The lakes also have longer periods of time where little of the scenery changes.

I’d suggest your first trail in Everglades National Park be Nine Mile Pond, a five-mile loop through a variety of scenery including some mangrove tunnels, with good opportunities for wildlife viewing and less challenging in terms of narrow passageways.  Here’s a Florida Rambler story on Nine Mile Pond.

Planning your visit to the Everglades:

PS, We did go out at low tide and we really did enjoy the trip, after a mile or 2!

We didn't pay any attention to the tides, so thanks for the tip. Maybe that contributed to the challenge. Thanks for your comments!

Make sure you don't go out at low tide, for if you do, you will need to use your paddle, as a push pole, to push yourselves through the mud!