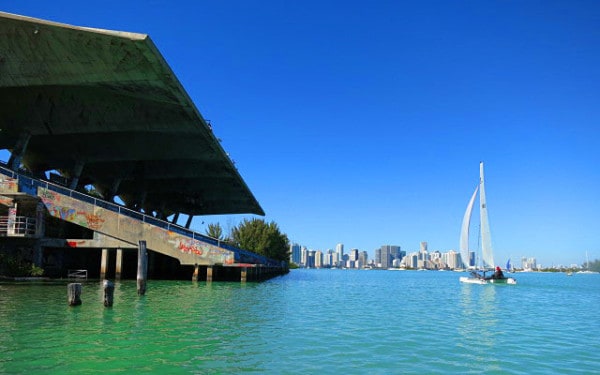 It’s the first island you reach heading across the Rickenbacker Causeway from downtown Miami to Key Biscayne, but Virginia Key was the sort of island where Miami put things it needed but wanted to hide. A beach here was reluctantly designated in the 1940s “for the exclusive use of Negroes” and a sewage treatment plant was built here in the 1950s.

Today, however, Virginia Key is being preserved as a recreational center with beaches and mountain-biking trails, and, as I discovered recently, it is a hidden treasure for those who like to explore by kayak.

Your Virginia Key kayak outing includes an amazing combination – the most stunning views possible of the Miami skyline rising out of the glassy waters of Biscayne Bay on one side and, in the other direction, quiet mangroves lagoons with water so clear you can see fish darting underneath and rays resting in the seagrass. Along the way, there are plenty of birds and a chance to spot dolphins, manatees and sharks. 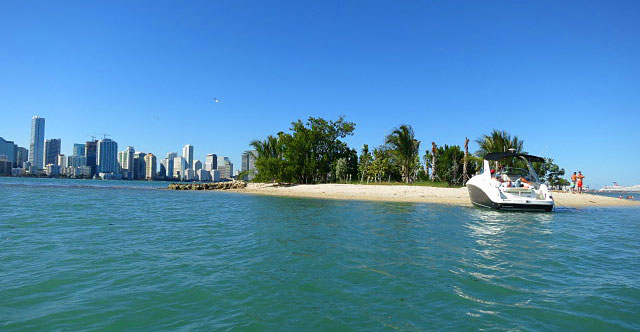 There were several places for picnics near Virginia Key. A sandy beach lines one end of the Miami Marine Stadium basin and would make a good stopping point. But this little tropical island beckoned to us. With its sandy shore, palm trees and petite size – it’s only about  200 feet across – it looks like the cartoon version of a deserted island.  (Photo: David Blasco)

My favorite thing about Virginia Key: The old Miami Marine Stadium, an icon of Mid Century Modern architecture, now shuttered and looking like the graffiti-covered vestige of a lost civilization. (And – hurray! – the stadium may be saved. More on that later.) 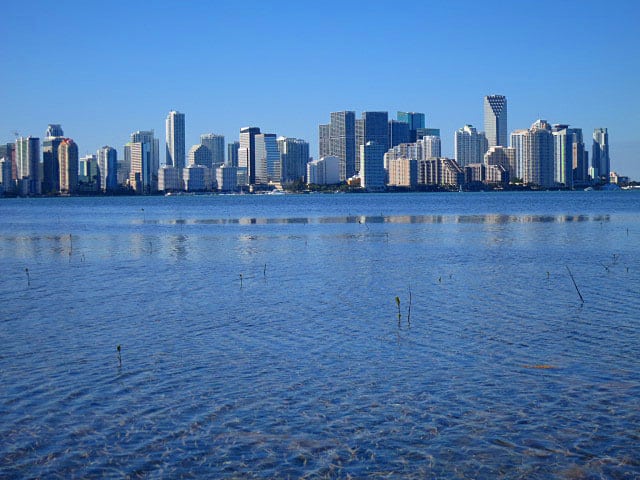 It’s a surprising combo of natural and manmade beauty and it’s accessible to millions of urban dwellers.

You can make your kayak trip at Virginia Key a challenge or an easy day on the water. If you want to circumnavigate the island, it’s about  six miles, and you are likely to face some wind and waves. 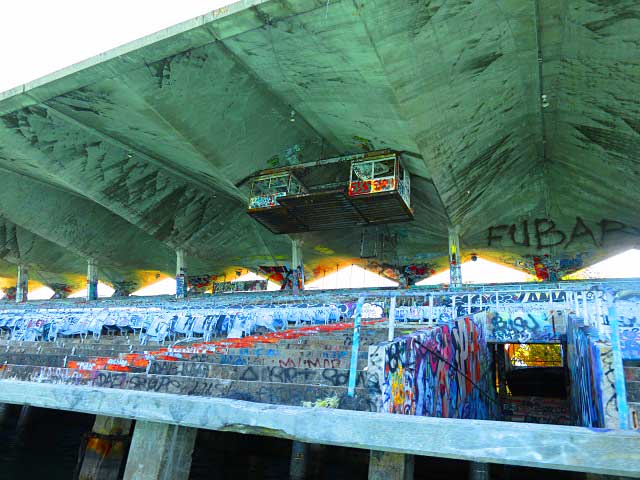 If you want a shorter experience – and I did — you want to concentrate on the northwest quadrant of the island, the side of the island that faces downtown Miami and the port. In a relaxed, three-hour trip, we paddled by the Miami Marine Stadium, had a picnic on a picturesque sand-fringed island and paddled past Virginia Key’s beautiful mangrove shoreline.

We launched from Hobie Beach, which is on your right immediately after the causeway reaches Virginia Key. Parking is free here but spaces can get scarce. The downside to this launch site: Paddling under the busy fishing bridge that parallels the causeway, with hooks and lines flying, and the choppy conditions around the bridge. 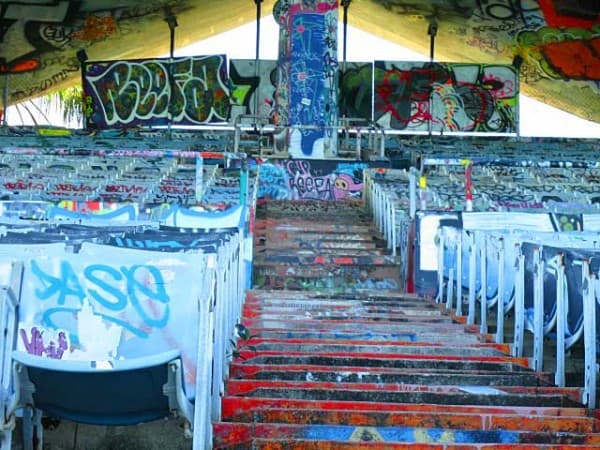 We discovered what we think is a better launch site: The Miami Rowing Center, which is the second left once you reach Virginia Key. The rowing center makes use of the large basin constructed for power-boat racing when the stadium was built in 1963. The facility has a public pool, public rest rooms and is adjacent to the Mast Academy. If you enter the parking lot for the Marine Stadium, go all the way to your right to reach the launch area, which is used by dragon boat teams. You do have to carry your kayak some distance (through the chain-link-fenced area), so if you have a carrier, bring it.

Whether you launch from the beach or the Miami Rowing Center, you’ll want to paddle past the Miami Marine Stadium, which ranks as “one of the world’s great places,” according to Don Worth, who helped co-found the save-the-stadium effort several years ago.

The long-shuttered 6,500-seat stadium is covered with a huge wavy origami-like concrete roof that, when built, was the longest span of cantilevered concrete in the world, according to the National Trust for Historic Preservation. Look west and you see the skyline of Miami rising above the water.

That view of Miami is magic: “Do you remember in the Wizard of Oz, when you first see the Emerald City emerging from the fields?” Worth says. “It’s like that: It takes your breath away.”

Built in 1963 to house speed-boat racing at a time when America was in love with powerboats and water skiing, it once drew large crowds.  At its heyday, it hosted mid-century icons such as President Richard Nixon (who owned a house on Key Biscayne), Sammy Davis Jr. and Elvis Presley, whose movie “Clambake” was filmed here. 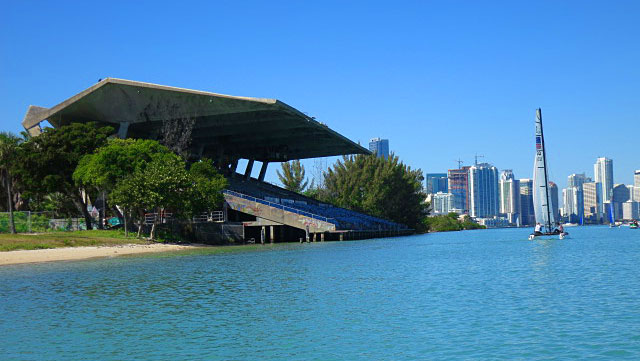 Later Gloria Estefan performed here and the fact that the stage was on a floating platform seemed magical to “an island girl,” Estefan has said. At Jimmy Buffet’s 1985 concert here, the basin was filled with sailboats, rafts and swimmers, and Buffet famously joined them with a leap from the stage into the water at concert’s end.

But by the time Hurricane Andrew walloped Miami in 1992, the stadium had entered its “white elephant” phase, Worth said.

City leaders said the stadium was too damaged by Andrew to be repaired and it never re-opened. It sat empty for 20 years, attracting graffiti artists, trespassing skateboarders, lovers of architecture and photographers.

Finally, the grassroots effort to save the stadium determined the hurricane damage was not serious and supporters began a determined effort to save it. This effort, backed by luminaries like Gloria Estefan and Jimmy Buffet has been going on for years, but has not overcome the financial hurdles.

In the meantime, the best way to see the stadium is from the water and, if you ask me, by kayak. 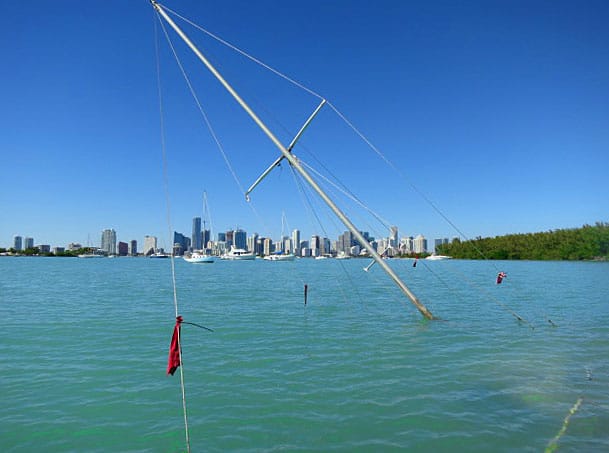 Once on land,if you choose to go to Virginia Key Park, admission is $8 on weekends; $6 on weekdays. The beach and adjacent shaded picnic area are obviously very popular. Mountain biking trails opened in 2013 and even at 5 p.m. on a weekend day, the parking lot for the trail had 50 cars. Yelp reviews are evidence of how much the fat-tire crowd loves Virginia Key.