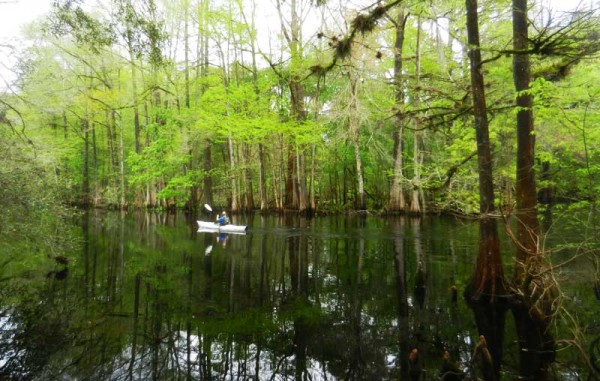 Not only is the Withlacoochee River wild and gorgeous, but it is also so long that you can return again and again to paddle different segments.

The Withlacoochee River, Florida’s fourth largest, is designated a Florida Outstanding Waterway and is unusual in that it flows north. It starts in the Green Swamp near Orlando and meanders largely through state forest and undeveloped land for 141 miles to empty into the Gulf in Yankeetown. The state-designated trail from Lacoochee to Dunnellon is 76 miles.

It ranks as one of Florida’s most scenic rivers, and yet the The Withlacoochee River is uncrowded and unspoiled.

We’ve paddled two segments of the Withlacoochee River, at its southern end starting in Nobleton, and at its northern end, with a base in Dunnellon. Both paddles were full of natural beauty and wildlife with almost no people or boats.

If you’re planning a trip, use the state’s detailed mapand its trail guide. Both have extensive information on places to launch and camp as well as shuttle services.

Kayaking the southern section of the Withlacoochee River

Within an hour of Orlando and Tampa, the Withlacoochee River meanders through an unspoiled cypress forest. On a sunny winter weekend when I visited, an 8-mile paddle involved seeing only one canoe. The count for alligators? Four.

This section winds through the Withlacoochee State Forest, a wild, natural region with many options for campgrounds and picnics. 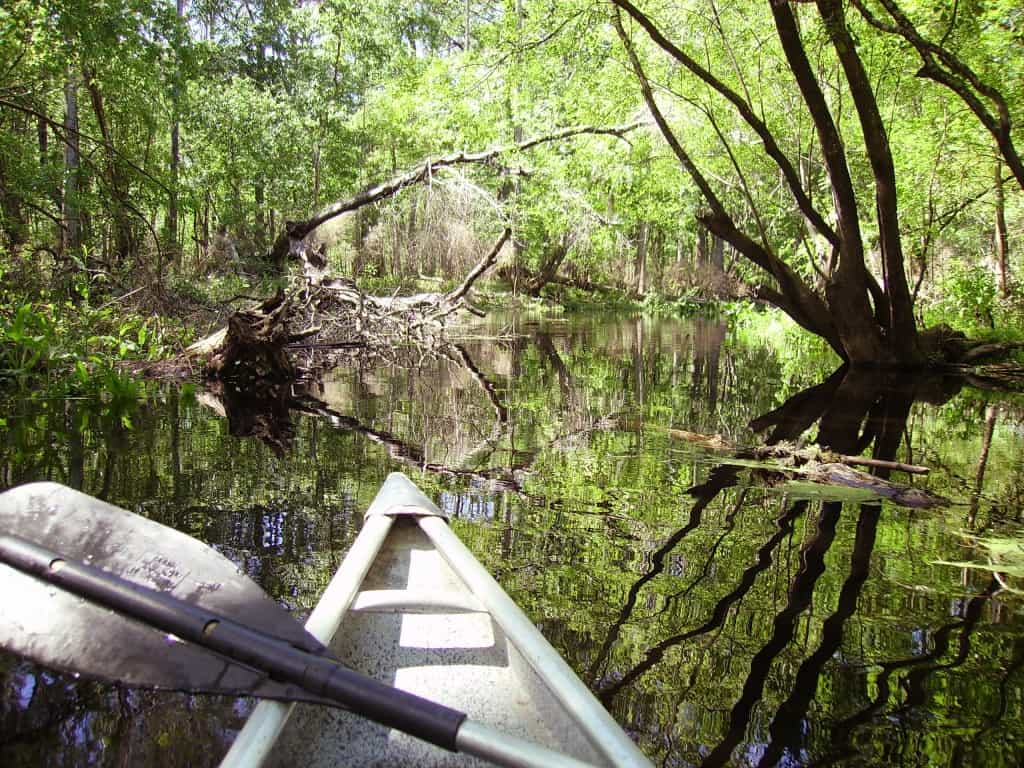 The Withlacoochee River is among Florida’s most scenic paddles. (Photo: David Blasco)

We used Nobleton Canoe Outfitters, which will deliver you and a kayak or canoe upstream for either a 10-, an 8- or a 5-mile float back to the outfitter’s base, where you can get a bite to eat at the outdoor cafe. The outpost also rents a cabin. The outfitter is open four days a week, closing Monday and Tuesday. (There’s no website for the outfitters, but there is a Facebook page for the cafe run by the same family, the River Ratz Cafe.) For information, call 352-796-7176.

Campers can arrange for longer floats with an overnight at designated camping site within the Withlacoochee State Forest.

The scenic Florida river is rich in history. Spanish explorer Hernando DeSoto visited here — a mass grave near the river on the McGregor Smith Scout Reservation in evidence — and Seminole warrior Osceola frequented the region. 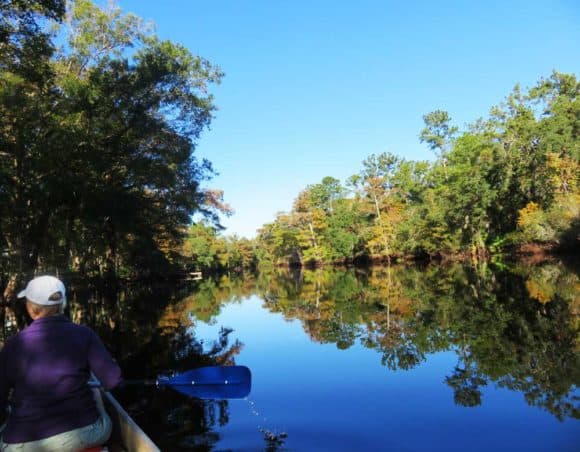 Kayaking the northern section of the Withlacoochee River

The outfitter we used in Dunellen, Rainbow River Canoe and Kayak, runs trips on both the Rainbow River and the Withlacoochee, and thanks to the dazzling clarity of the spring-fed Rainbow River, few people opt for the dark waters of the tannin-stained Withlacoochee River. To me, that’s a feature, not a bug. We loved the solitude.

On our 9-mile paddle on the Withlacoochee back to Dunnellon, we passed four or five smallish alligators, a tree full of woodstorks, and so many beautiful vistas with cypress trees draped in Spanish moss that we had to make ourselves stop taking pictures.

With shores lined by cypress swamp and knees, there are few places to stop for a picnic. If you use Rainbow River Canoe and Kayak, they’ll tell you about a great place to stop that is not a public facility but where they have permission to land.

About a half hour into the 9-mile trip, there is a nice stop on the left at Oxbow Recreation Area. It’s early for a picnic stop, but worth taking to stretch your legs. There is a loop hiking trail you can walk there too.

This section of Withlacoochee has only a few houses along the way, so the sights and sounds are of natural Florida at its best. 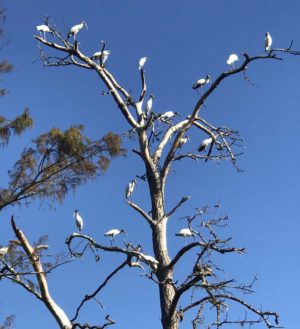 Things to do around the Withlacoochee River:

I’m new to the area. Thank you soooo much for taking the time to record your trips. It helps me decide where to go next!

Where is the best place to swim on the W. River, with easy access?

Thank you so much for writing this. We are doing the same trip for the southern portion and I’ve been trying to find information about that segment of the river. This is extremely helpful- thank you!!

[…] water from numerous caves, crevices and sand boils. The river is 5.7 miles long, flowing into the Withlacoochee River, where it’s crystal clear water meets the dark tannin water of the […]

The 7-mile trail mentioned in this "Kayaking the southern section" is no longer maintained by Florida Trail Association.