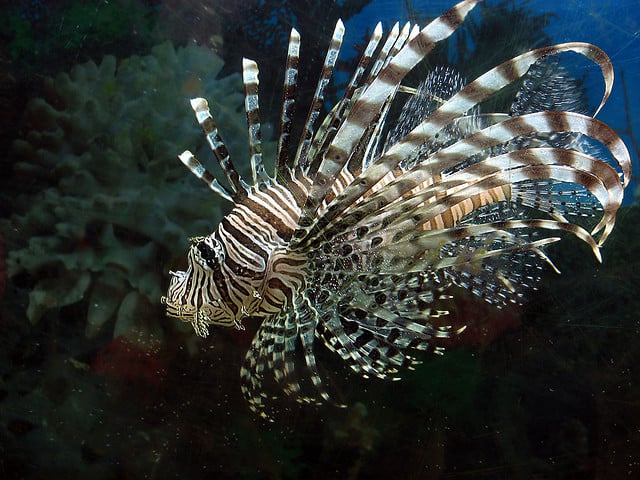 I like to eat fresh-from-local-waters fish when I visit a seaside location, but I never imagined that would include an exotic, invasive predator.

The lionfish is a beautiful salt-water-aquarium specimen that is taking over Florida’s coral reefs and gobbling up native fish.

The saga of the lionfish iin Florida sounds like a bad sci fi movie: An alien invades paradise and voraciously gobbles up 90 percent of its inhabitants. The natives don’t even feel afraid; they do not recognize the beautiful alien as a threat.

The lionfish is taking over coral reefs in Florida and the Caribbean, feasting on native fish that don’t even recognize it as a predator.

This invasive species, prized in salt-water aquariums and originally from the Pacific and Indian oceans, has found the Caribbean to be an even better place to live than its original home. Here, lion fish are growing to monstrous sizes – some are three feet long.

It is believed lionfish were introduced to Atlantic waters when someone dumped an aquarium in the ocean.

Scientists have been in a quandary about how to eliminate lionfish, but one tactic that’s finding success is this: Eat ‘em to beat ‘em.

The tactic is catching on because, as I learned at a Florida seafood restaurant, lionfish can be delicious. We had an outstanding lionfish appetizer at Rusty’s Seafood and Oyster Bar in “restaurant row” inside the Cape Canaveral port. We ordered the lionfish appetizer, which was large enough to be a dinner entree when we added a side salad.

Whole Foods began selling lionfish in Florida stores several years ago, and it can be found in Publix supermarkets too. More and more restaurants are adding it to the menu as supplies have grown.

Lionfish have a toxic venom, but it is located only in their spine, which is immediately removed, and eating the fish is safe. Their skin and scales are so thin that they can be removed with blast of water from a hose.

Lionfish are caught by spear-fishing. Unlike lobster or stone crab, two of the Florida’s seasonal seafood resources, lionfish can be captured year-round and there is no size or bag limit. Local commercial fishermen sell the lionfish by-catch to restaurants, providing them an incentive to remove them from the waters.

Because of the way they are caught, not all restaurants that serve lionfish always have them on hand or on the menu.

The World Lionfish Hunters Association maintains a list of restaurants that serve lionfish and urges people to request them: “Create a demand for lionfish by asking for it at your favorite seafood restaurant and always eat lionfish when it is on the menu,” the group’s website says. The organization describes lionfish as tasting like a mild grouper or mild snapper.

Restaurants serving lionfish listed by the Lionfish Hunters Association include:

Other places we’ve seen lionfish on the menu:

For list of restaurants in the Caribbean serving lionfish, visit the Lionfish Hunters site.

Do you know of any online seafood markets that sell lionfish fillets to cook and eat ? Thanks

I see lionfish periodically at Whole Foods. I've seen it in other fish markets, but there isn't a reliable every-day availability.

THANK YOU FOR YOUR WORK. Can u all get lionfish on menus in Venice/Sarasota Florida. ALL are east coast, FL. WE are becoming alive here in Sarasota. We are growing fast.

Lionfish are on menus at restaurants near the reefs where they live and are caught with spearguns. I doubt the harvest is enough to supply the other side of the state, but keep your eyes peeled!