Love orchids? Free tours at R F Orchids in the Redland are a must 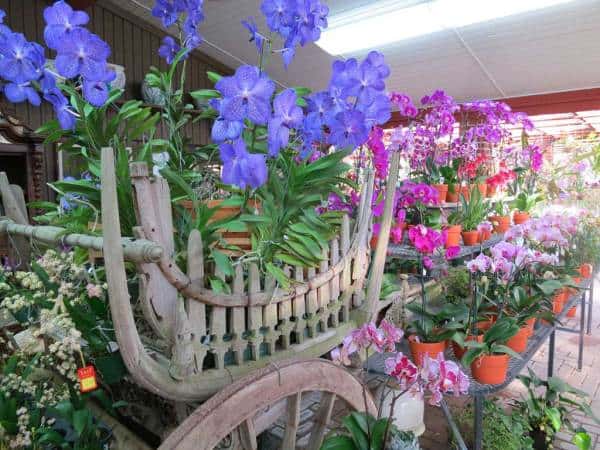 Displays are over the top at R F Orchids in the Redland. (Photo: Bonnie Gross)

Most folks who love the subtropical foliage of Florida soon learn to love orchids – the native ones but also the splendiferous variety from around the globe that thrive in our climate.

If you have fallen for orchids, you owe it yourself to visit the Redland, the surprising rural enclave south of Miami where several orchid growers are located.

While there are other growers, for pure beauty and interesting history, orchid lovers should head to R F Orchids for one of the best free tours I’ve ever taken.

The whole area makes a great daytrip that is also full of food (celebrated cinnamon buns at Knaus Berry farms) and fruit (famous Key Lime Milkshakes at Robert is Here) and locally made wines and beer (Schnebly’s Redland Winery.) 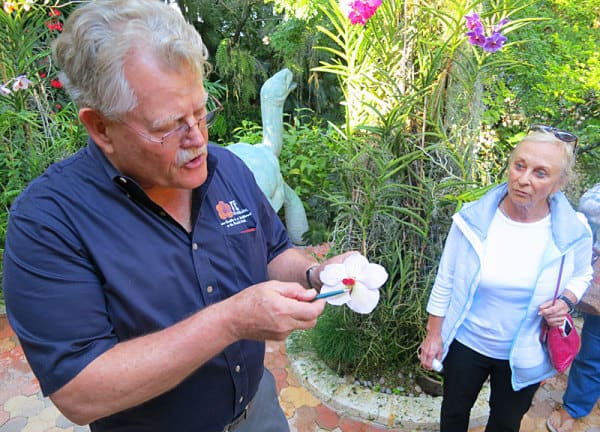 Robert Fuchs, owner of the award-winning R F Orchids in the Redland, gives free tours on weekends when he is in town. (Photo: Bonnie Gross).

R F Orchids has a fascinating back story

R F Orchids has captivating gardens and award-winning blooms. (It has won more than 1,000 American Orchid Society awards in 30 years.) Here, there are orchids wherever you look: In the ground, around fountains and peeking out of every crevice.

The best part: Robert Fuchs. Unless he’s judging an orchid show or leading a South American orchid tour, the president of R F Orchids, leads free tours through the private gardens around his adjoining residence on weekends at 11 a.m. and 3 p.m.

“I try to give the tour myself,” Fuchs said, “because I know the history.”

And there is a lot of history.

His great-grandfather was a Redland pioneer, who homesteaded on the property in 1921. His grandfather operated a nursery there until his death in 1969, and in 1970, Fuchs, a new college grad, took over the business and began raising orchids. 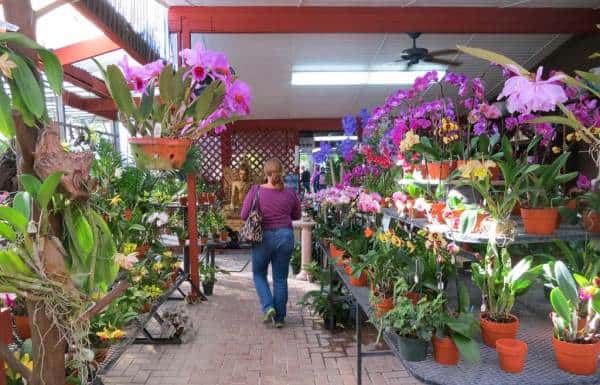 During those early years, Fuchs was a middle-school art teacher who grew orchids on the side and opened his greenhouse to orchid lovers on weekends and late afternoons.

His big break came in 1984, when orchid growers from around the world came to Miami for the 11th World Orchid Conference. Fuchs’ orchid, named Vanda Deva Robert, won the top honor, Grand Champion of the World.  With the international recognition, he was able to quit teaching and devote himself to orchids the following year. 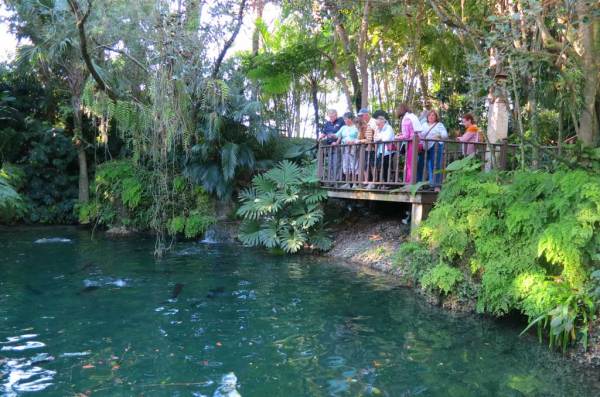 On the grounds of Robert Fuchs’ home is a fern-rimmed pond with an alligator, South American pacu fish and exotic catfish. It is one of the surprising part of the R F Orchids tours. (Photo: Bonnie Gross)

His tours benefit from a sense of humor that must have served him well as a teacher. Fuchs tells anecdotes of Redland history, including the fascinating story about his own experiences during Hurricane Andrew in 1992, which devastated his property.

Today, R F Orchids is the oldest South Florida orchid firm and he has decorated his gardens with such items as antique Burmese temple gongs and 200-year-old Buddha statues from Thailand.

His garden tour engages all the senses: Screams of colorful parrots in cages, the fragrance of rare varieties of blooming orchids, the taste of edible orchids or a sweet wine made from lemongrass and a scorpion that Fuchs invited us to try. 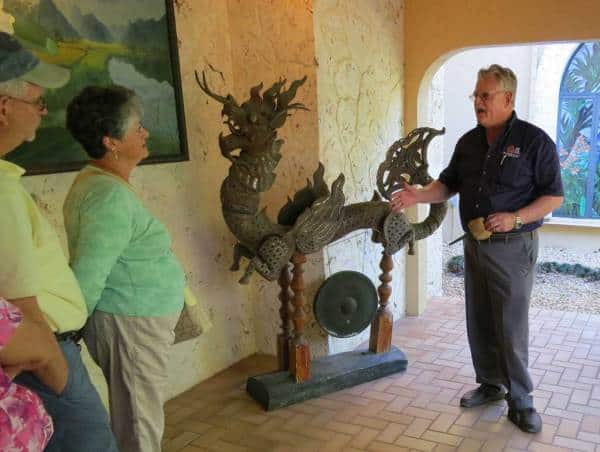 Ever object in R F Orchids garden has a story

The beauty of the gardens is enhanced with cages of colorful macaws.  “They’re all rescue birds,” Fuchs said. “One flew in after Hurricane Wilma.”

On the tour, Fuchs has a story about seemingly every tree and object.

He points out trees covered from the ground to 20 feet up with a huge vining orchid plant – that’s a vanilla orchid, he explains, and then describes how the fruit of this orchid, which looks like a big green bean, has to stay on the vine for nine months to develop its distinctive flavor and aroma and then be cured and dried.

In his backyard there is a fern-rimmed pond with an alligator named Wally, South American pacu fish and exotic catfish.  It’s such a vision of a tropical paradise, you expect Tarzan to come swinging through the trees. 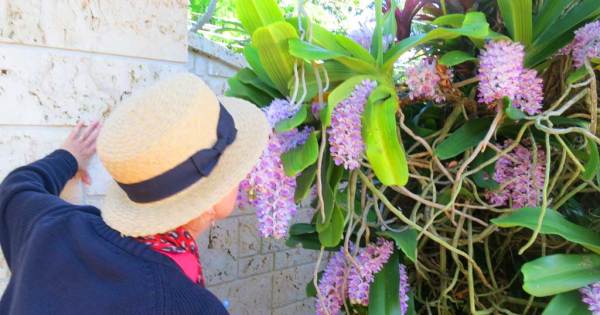 The garden tour at R F Orchids engages all the senses: Screams of colorful parrots, the fragrance of blooming orchids, the taste of edible orchids. (Photo: Bonnie Gross)

While the tours are only given on Saturdays and Sundays, the R F Orchids showroom is open Tuesday to Sunday. You won’t see the pond, alligator and exotic landscaping located on the private grounds, but the showroom is bursting with dazzling orchid specimens.

In addition, surrounding the greenhouse are shaded public gardens full of orchids and other tropical flowers where you are welcome to visit – and even picnic – whenever R F Orchids is open.

Open Tuesday to Sunday, 9 a.m. to 5 p.m. Free tours are offered at 11 a.m. and 3 p.m., Saturdays and Sundays, weather permitting. A garden tour in Spanish is offered on Sundays at 2 p.m.

While in Redland, you may also want to visit:

Previous
In winter, tour the historic Nike missile base in Everglades National Park 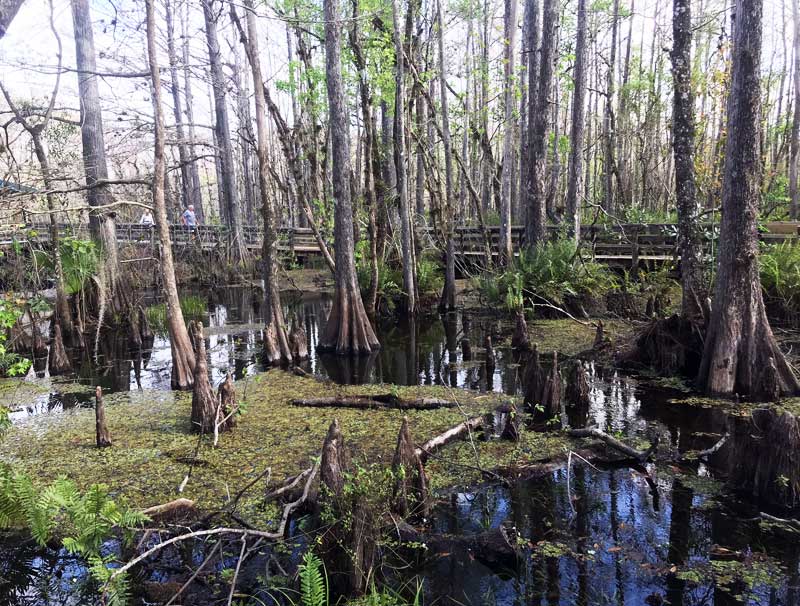