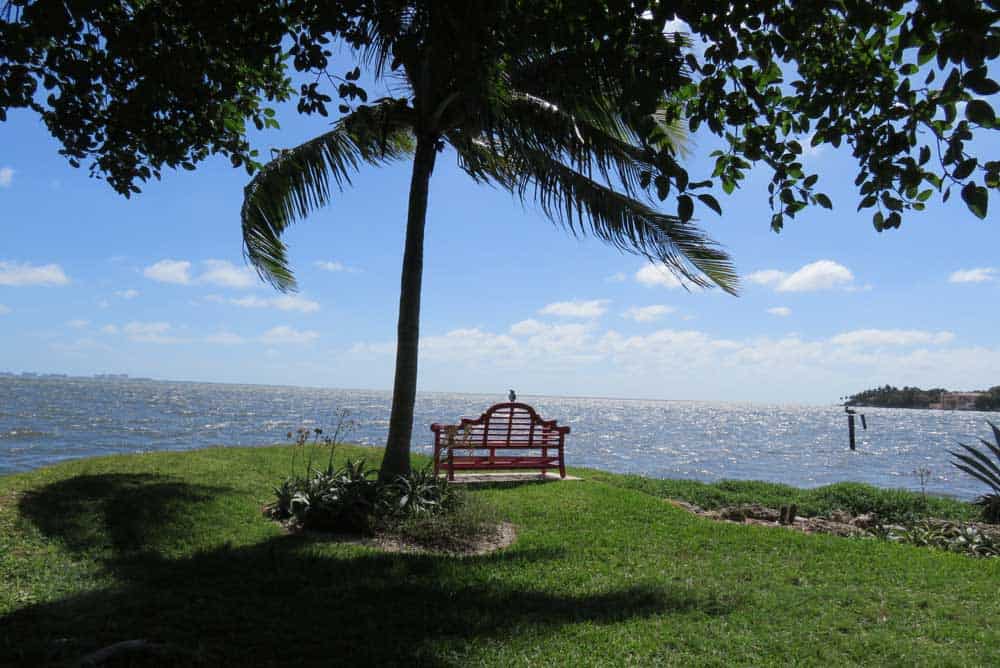 The Point at the Kampong, Miami. It was this view that convinced David Fairchild’s wife, Marian that “‘We’ve got to have this place.” (Photo: Bonnie Gross)

What took me so long?

I’ve lived in South Florida for more than three decades, I love gardens and history, and yet I had never visited The Kampong, the Coconut Grove garden estate that was the home of Miami plant-explorer David Fairchild.

It’s actually easy to explain: The Kampong is a little harder to visit than, let’s say, the huge and spectacular Fairchild Tropical Gardens down the road. It’s pricey for a small site– $20 for adults – and you need to make reservations in advance.

I loved visiting the Kampong. It’s a great outing for people who have visited all the big-draw attractions in the Miami area, but if your time or money is limited, be sure to tour Fairchild, Vizcaya and perhaps Deering Estate first. 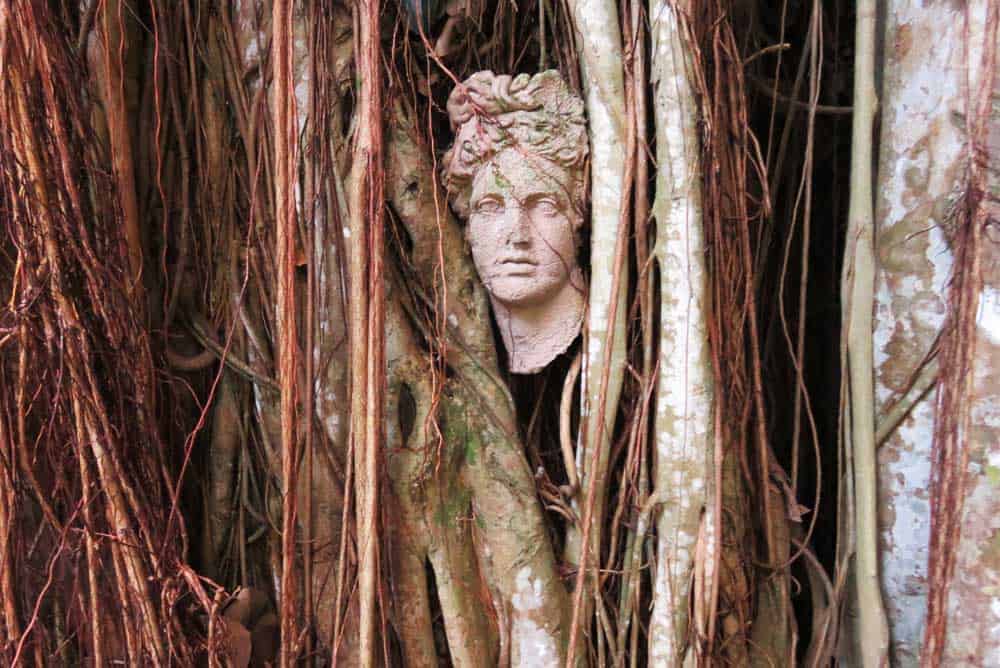 Sculpture in the ficus tree at the Kampong, Miami. The Kampong is  part of the National Tropical Botanical Garden.(Photo: Bonnie Gross) 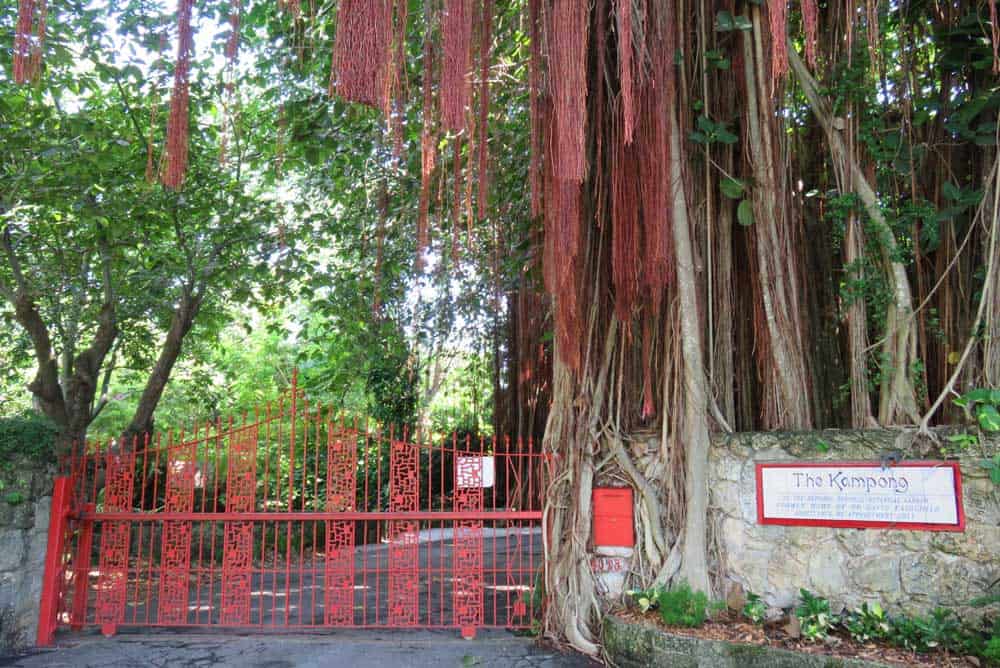 The entrance to the Kampong, Miami, where a ficus tree is devouring the coral rock wall. (Photo: Bonnie Gross)

The fascinating history of the Kampong, Miami

In 1916, Fairchild and his wife Marian, daughter of Alexander Graham Bell, toured the property, which had been occupied since 1882 when it was homesteaded by J.W. Ewan, known as the “Duke of Dade.”

David Fairchild writes about the first time he and Marian saw what was to become the Kampong, standing at a spot called the Point, a small piece of land that extends out into Biscayne Bay .

“Marian gazed a moment at the blue water of the bay, noted some royal palms near a canal, glanced at the house with its tangle of vines over the porch and said very simply and in a strangely decided way: ‘We’ve got to have this place, David.'”

When you explore the Kampong, you will want to linger at the Point, which today offers views in the distance of downtown Miami high rises and across the water to Key Biscayne. 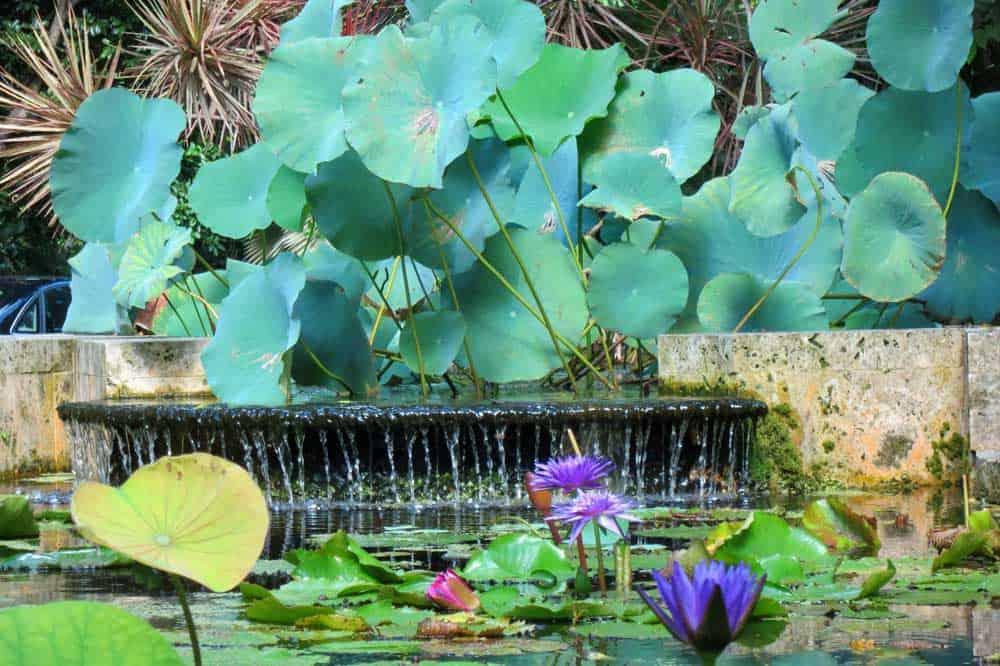 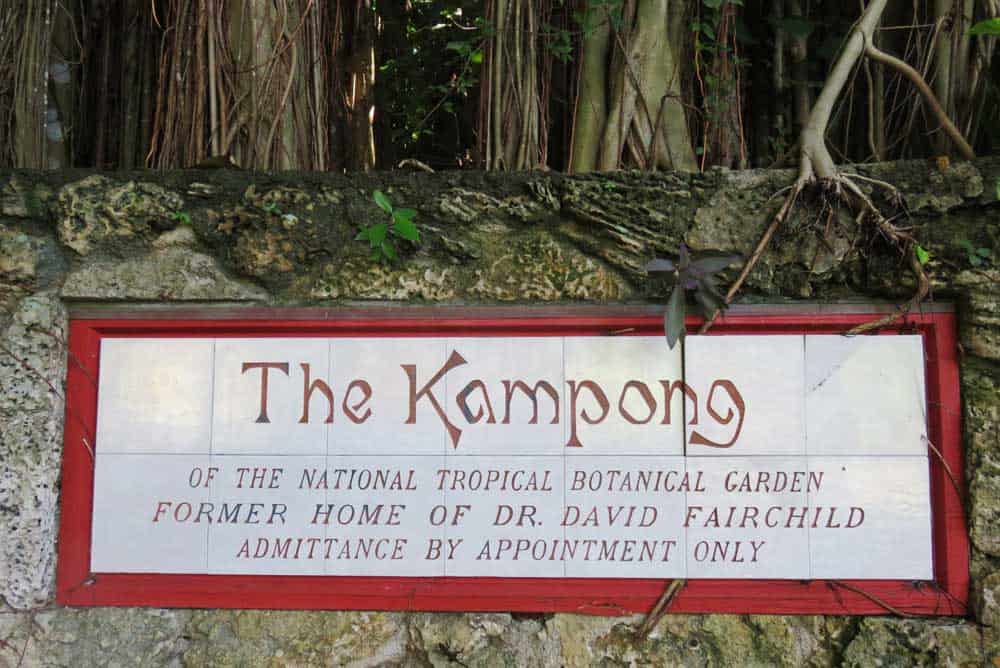 While not large (it’s 11 acres), the rest of the property is full of interest and charm too.

We loved the swimming pool, with huge coral stone boulders submerged in it; the water-lily pond and its little waterfall; the huge ficus tree that is enveloping the coral wall along Douglas Road; the profusion of exotic plants with fruits and flowers from around the world that Fairchild planted.

The house itself is a beautiful complement to the grounds, but there is only a little to tour inside.

Other historic buildings are on the grounds – a cottage built for a professor who visited frequently and a building that was the doctor’s office for Dr. Dr. Eleanor Galt Simmons. 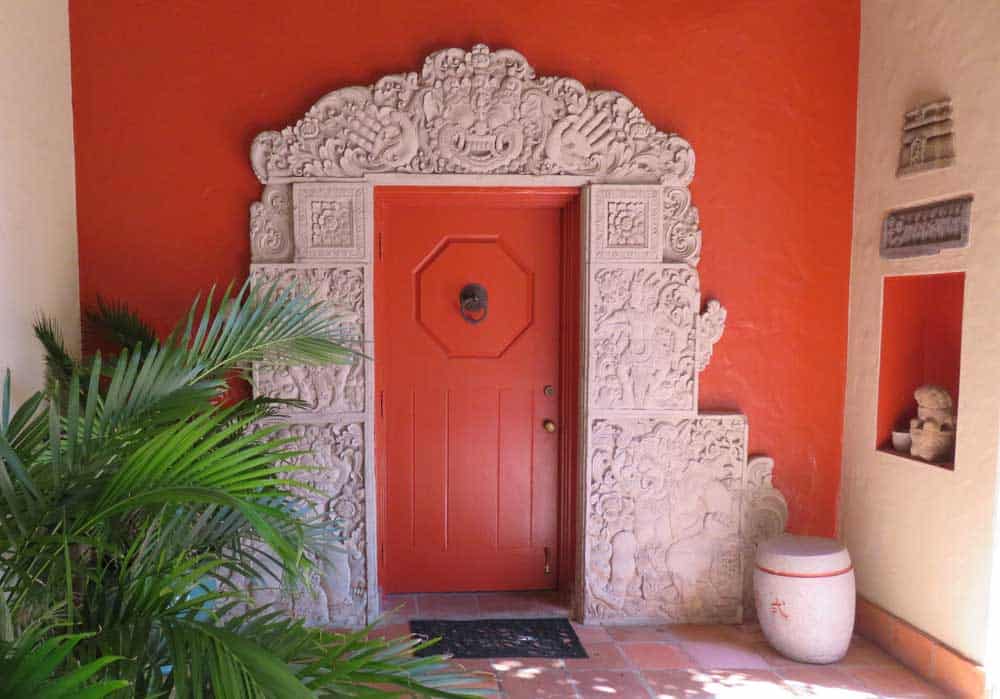 Dr. Simmons was the first woman to practice medicine in the Miami area and she and her husband, Captain Albion Simmons, bought the property in 1892 and sold it to the Fairchilds in 1916.

The Fairchilds built their own home in 1928 and they named the property The Kampong, a Malay word for a village, or a cluster of dwellings for an extended family. They wintered there for many years and eventually it became their retirement home. 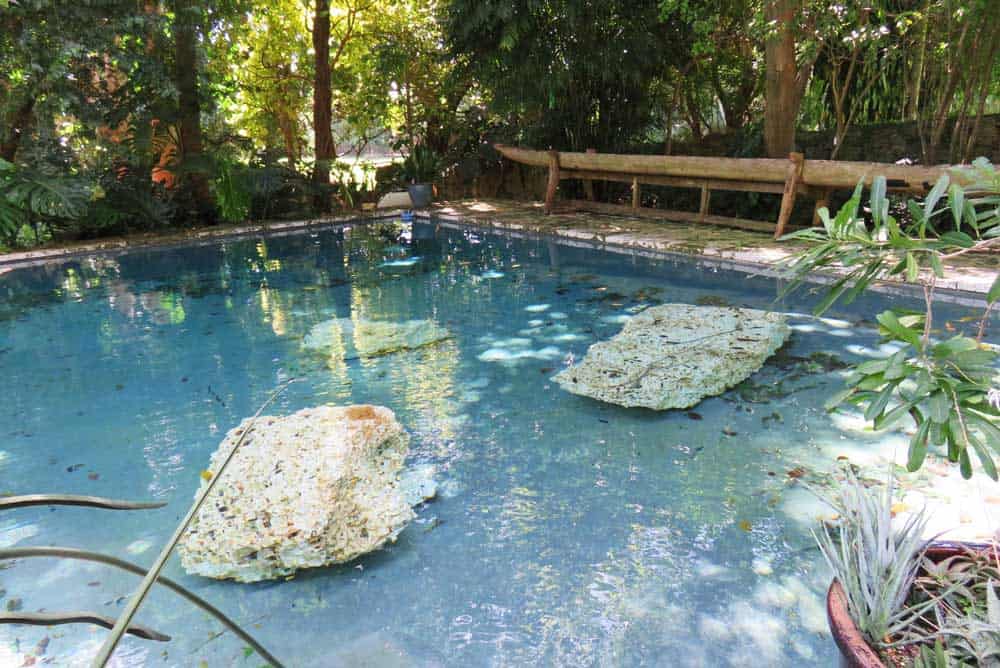 The pool at the Kampong in Coconut Grove. (Photo: Bonnie Gross)

Fairchild’s famous father-in-law, Alexander Graham Bell, visited only once (he didn’t like the heat) but the Fairchild entertained many notables of the time. He was a key player in establishing the Everglades as a national park and Everglades advocate Marjorie Stoneman Douglas was a visitor. (She wrote a book about him.)

David Fairchild died in 1954 and Marian in 1963. Fortunately, the purchasers of the property, Edward Cleaveland Sweeney and his wife, Dr. Catherine Hauberg Sweeney, were committed to preserving the property and its gardens and donated it to the National Tropical Botanical Garden. 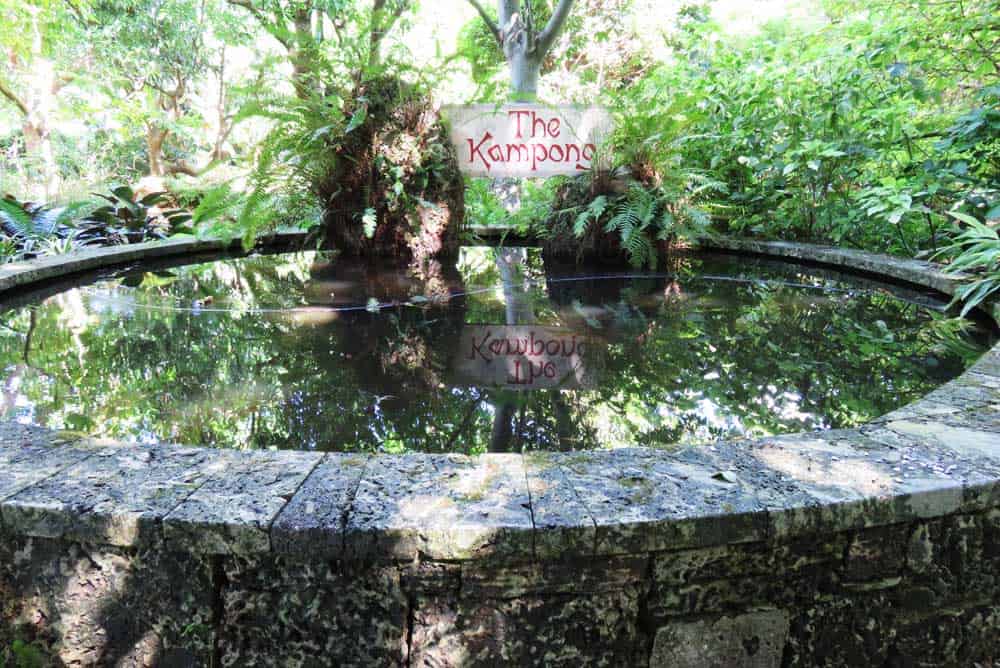 Blooming at the Kampong, Miami, in October. (Photo: Bonnie Gross)

Self guided tours are available 10 a.m. to 3 p.m. Monday through Saturday. Adults $20. Allow at least an hour. Tour information.

Guided tours are available September to June by appointment. Adults are $25. The tour is an hour.

Tips: Whether you take a self-guided tour or a guided tour, you are welcome to linger and explore on your own on the grounds, including bringing a picnic lunch. We took a walk through old Coconut Grove and enjoyed the tree canopy and historic homes. The Kampong, Miami. This is the main house, built by David and Marian Fairchild in 1928. (Photo: Bonnie Gross)

What’s near the Kampong in Miami

A perfect combination for a visit to the Kampong is to visit the Barnacle Historic State Park, five minutes away. Also situated on Biscayne Bay, it was the home of coconut Grove pioneer home of Ralph Middleton Munroe, and helps you picture what Coconut Grove was like when Fairchild arrived.

Another great combination would be to visit Fairchild Tropical Botanic Garden, named in honor of Fairchild although he was not the founder. It’s 10 minutes away and is a must-see for Miami visitors interested in nature. Allow plenty of time; there’s so much to see.

The historic Venetian Pool is 15 minutes away. It’s another beautiful and historic site.