Delray Beach is a walkable town with outstanding gardens, beaches, historic buildings and plenty of things to do

I would add to that list a seaside town between West Palm Beach and Fort Lauderdale: Delray Beach, which turns 110 in 2021.

Delray Beach is a perfect weekend getaway,  a charming, walkable urban area with plenty of things to do and some remarkable assets: Delray Beach wasn’t always so lively, so if your last visit was a decade ago, it’s time to rediscover Delray. 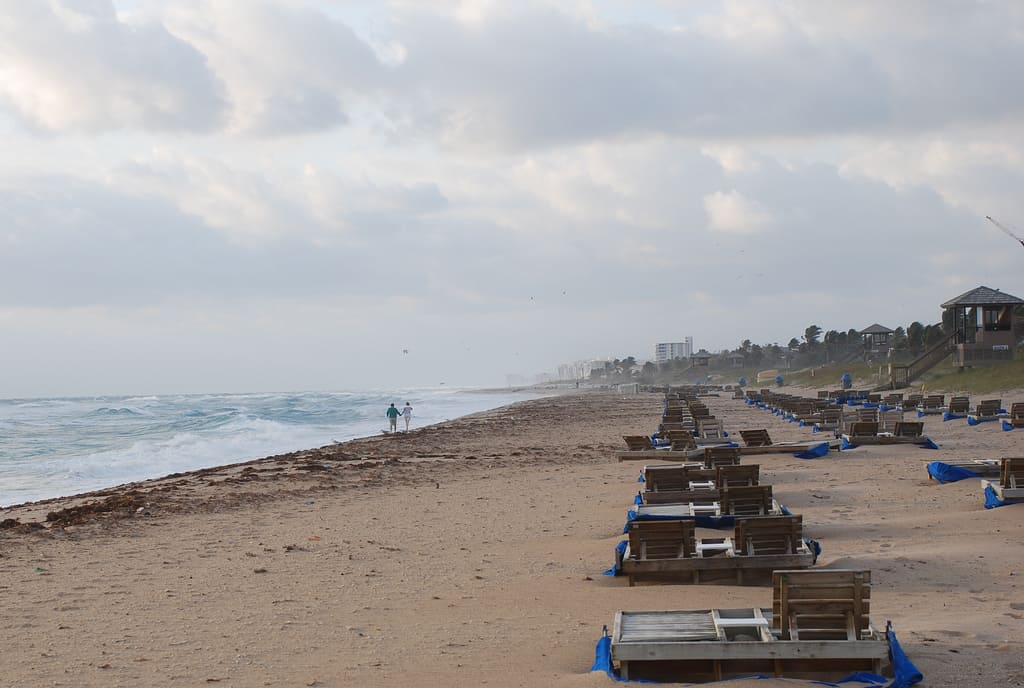 Back in the ’90s, it was “Dull-ray Beach,” says Jestena Boughton, owner/manager of the 1926 Colony Hotel. She is a member of the third generation to run the hotel since her family purchased it in 1935.

Today, she said, people are drawn to Delray because it didn’t “go big” in its redevelopment, preferring “people clustered around a main street of historic buildings.”

Delray’s renaissance started in the 1980s, when downtown storefronts were empty and older buildings neglected. The Community Redevelopment Agency began to address blight and crime and brought visible improvements such as trees and paving stones for downtown. Meanwhile, citizens led historic preservation efforts.

Little by little, the changing scene attracted artists and restaurants. Today, Delray is the envy of neighboring communities for its downtown full of people day and night.

Things to do in Delray Beach: Atlantic Avenue One of the most popular things to do in Delray Beach is to just meander Atlantic Avenue and dine or drink at a sidewalk café. Atlantic — or just “The Avenue” — has galleries and boutiques as well as traditional downtown merchants.

Hand’s Stationers, for example, has been there since 1934 and still draws folks with a wide selection of calendars, cards and art supplies. At night, crowds of well-dressed people of all ages spill onto the sidewalk from bars and restaurants offering live music.

You won’t have any trouble finding a place to eat. Atlantic Avenue and its environs has so many restaurants the city briefly considered steps to discourage more.

It’s not that Delray was always a mecca for foodies, but one successful spot attracted another, and today you’ll find many cuisines plus examples of most trends, from gourmet burgers to locally sourced seasonal menus.

Things to do in Delray Beach: Well, the beach, of course

The other traditional draw in Delray is its 2-mile-long beach. Delray is fortunate — an early property owner deeded one mile of beach to the public and thus the view from State Road A1A is of native vegetation and sand rather than a wall of high-rise condos. Unlike many seaside cities, you can walk from the cafes downtown right to the beach.

Things to do in Delray Beach: Historic buildings

While you’re downtown, there are several historic buildings worth visiting — even if you just admire them from the outside. These are all on the National Register of Historic Places:

Old School Square. This complex was once the elementary and high school. It was saved and handsomely restored through a community effort in the 1980s, spurring the downtown renaissance. 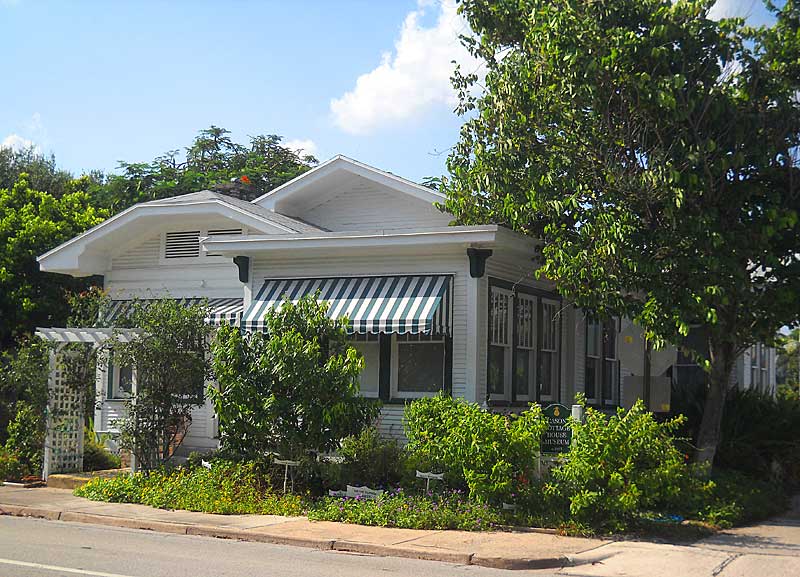 Today, it is a cultural complex, home to the Cornell Museum of Art and American Culture and the Crest Theatre. The former high school auditorium was transformed into an impressive 323-seat theater.

Sandoway House Nature Center. This 1936 beachfront home is a good stop for families, with its turtle pond, seashell gallery and especially its shark tank. Shark feedings are at 10:30 a.m. Tuesday through Saturday and 1:30 p.m. Sunday. 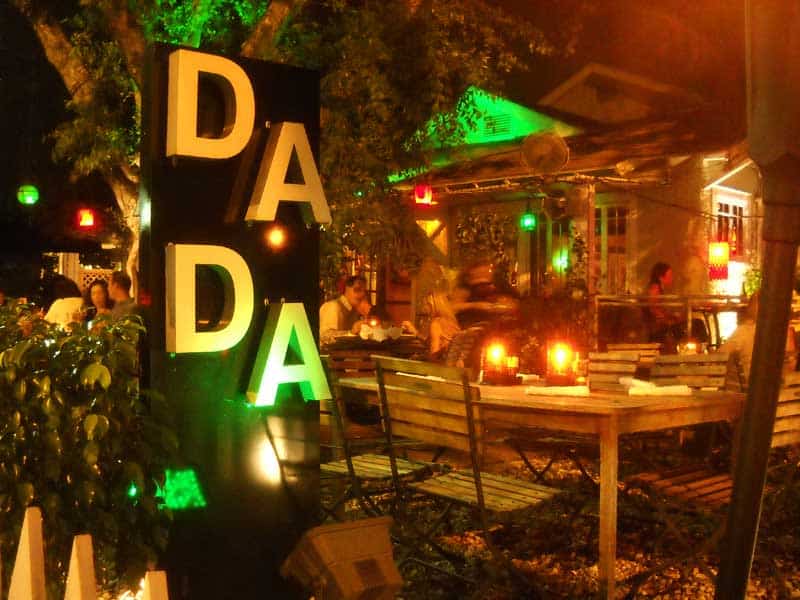 Things to do in Delray Beach: The Dada Cafe is a popular restaurant and live music venue built into a 1924 cottage. (Photo: Bonnie Gross)

The gardens around Sandoway feature native plants and an observation deck over the ocean.

Sundy House. What could be the oldest house in Delray Beach (there are two or three contenders), the 1903 Sundy House is now a popular bed and breakfast and restaurant. Be sure to stroll the gardens around the one-acre complex.

Tables for the restaurant are scattered throughout. If you’re going to pop the question, arrange for the romantically isolated “proposal” table. The most unusual aspect is a natural non-chlorinated pool designed to resemble the cenotes, sinkholes of the Yucatan. Sundy House, 106 S. Swinton Ave.; 877-439-9601. 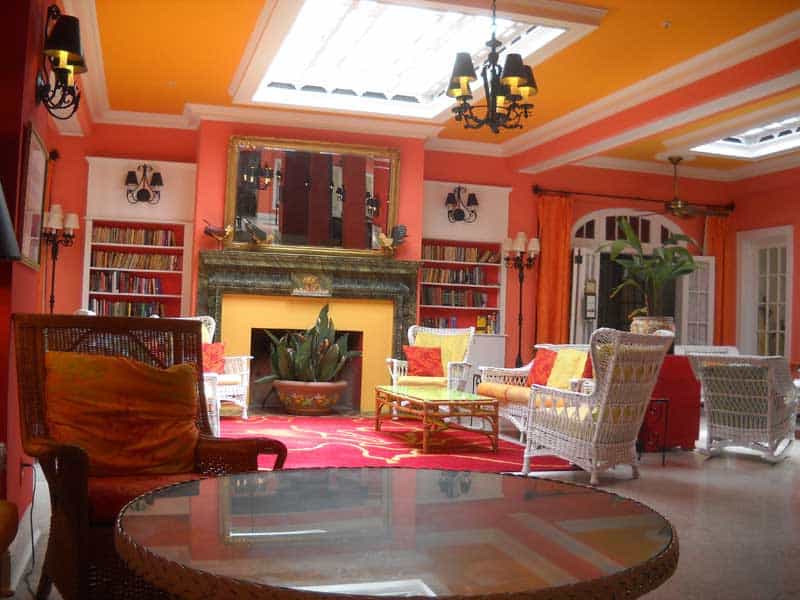 Things to do in Delray Beach: Lobby of historic Colony Hotel in Delray Beach. The same family has owned the hotel since 1935. The open-air lobby still isn’t air conditioned. (Photo: Bonnie Gross)

Things to do in Delray Beach: Gardens and birds

Two of the most popular attractions in Delray Beach are west of I-95. They will appeal to families and lovers of nature and all are outstanding.

The Morikami Museum and Japanese Gardens are actually another way Delray Beach preserved its history. The site was donated to the public by George Morikami, one of the Japanese settlers who carved a pineapple farming colony out of the pine forests of west Delray starting in 1904.

There are two museums on the grounds: The original building is a model of a Japanese villa; the newer and larger building has extensive exhibition space, an excellent gift shop of Japanese merchandise and a well-regarded Japanese restaurant. 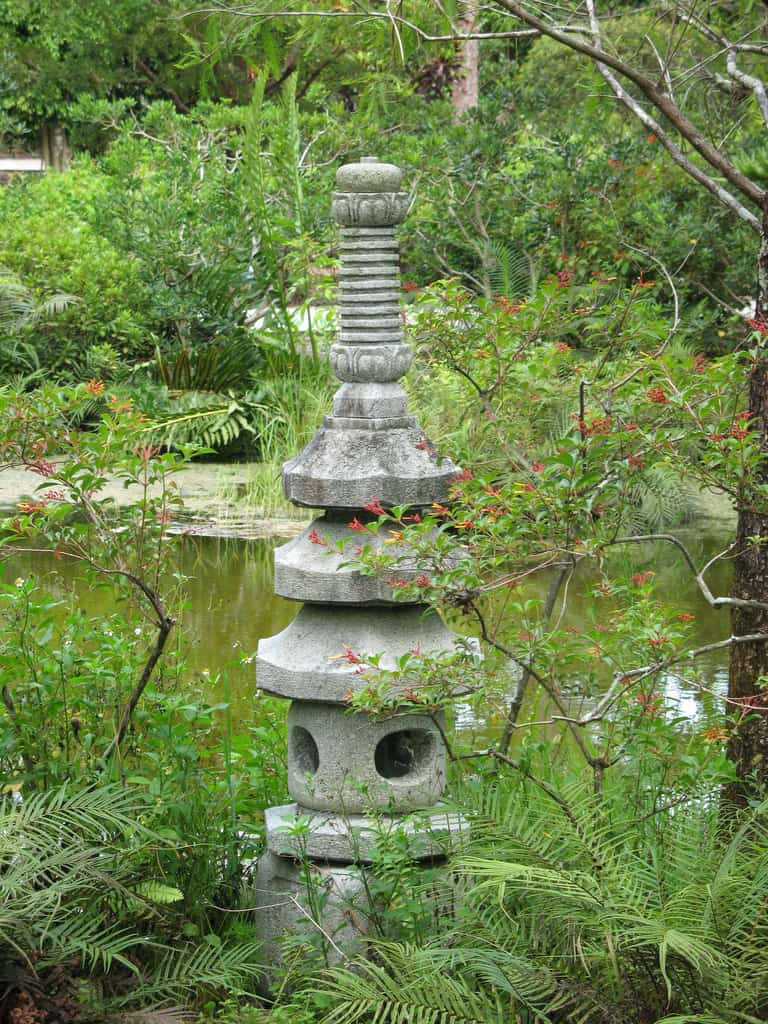 Things to do in Delray Beach: Morikami Gardens in Delray Beach (Photo by Donielle via Flicker) Don’t miss the bonsai collection: some are 400 years old!.

The star of the complex, though, is the garden, which is actually six distinct gardens representing different styles. Don’t miss the bonsai collection; some specimens are 400 years old!

The Morikami has a specially built tearoom where tea ceremonies are held once a month, usually on the third Saturday. 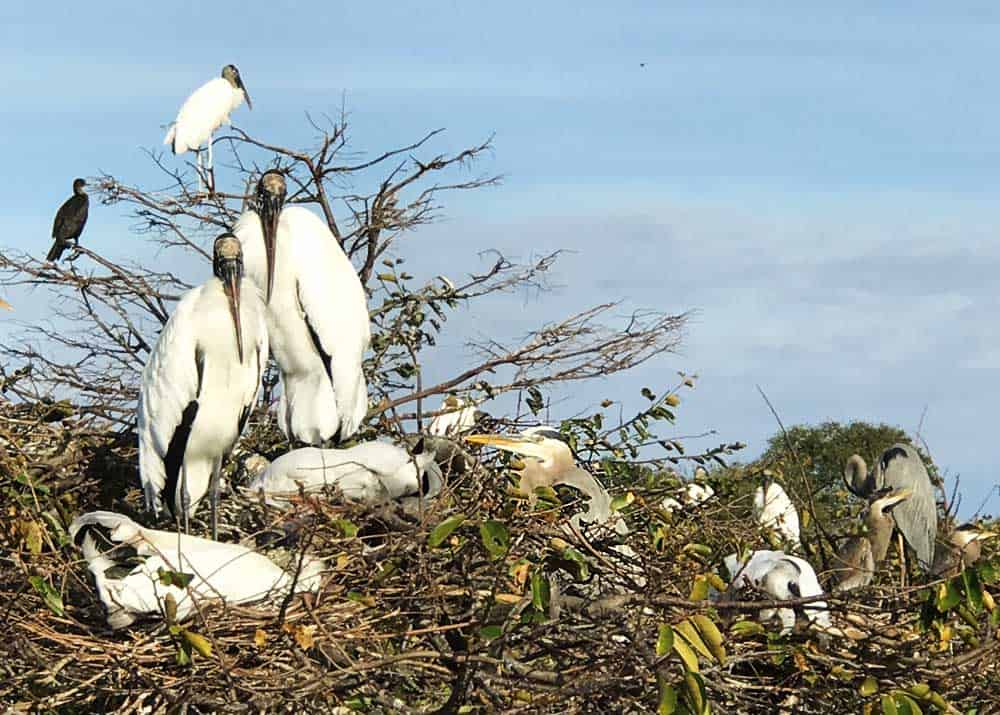 Things to do in Delray Beach: At Wakodahatchee Wetlands, in spring you can see wood storks, anhingas and herons nesting together right off the boardwalk. (Bonnie Gross)

Along the same road as the Morikami is Wakodahatchee Wetlands — a local treasure that is free. The manmade marsh filters water from the nearby treatment plant. But it has been engineered to host wildlife, and, boy, has it ever succeeded.

Wakodahatchee is considered a birding hotspot and the birds are often easy to see, fearlessly feeding right next to the boardwalk. The place is a favorite with nature photographers, who wait patiently with their long lenses. Kids are always happy to spot one of the alligators.

Wakodahatchee Wetlands, located behind the Palm Beach County Water Utility Department’s building at 13026 Jog Road, is open from 7 a.m. to 7 p.m. every day; free.  FloridaRambler.com wrote about Wakodahatchee and nearby Green Cay in a story about birding hotspots. 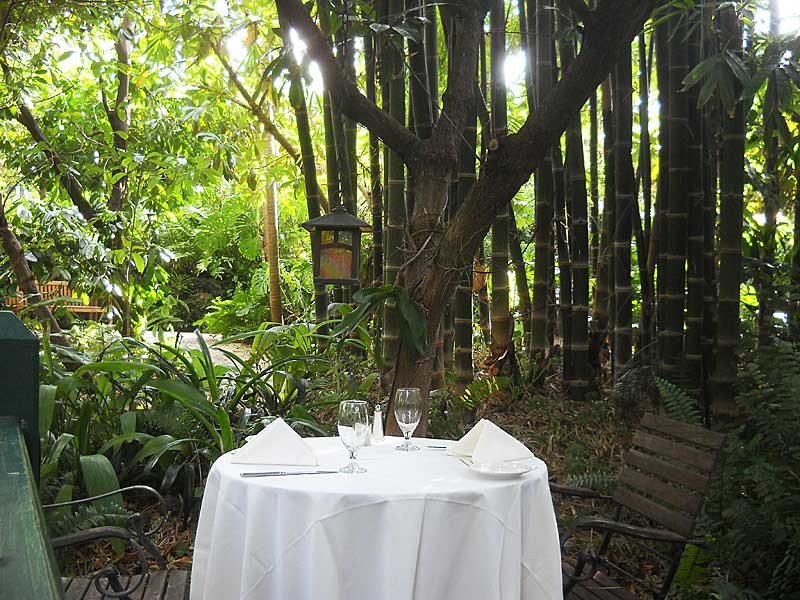 Things to do in Delray Beach: Restaurant tables situated in the gardens at the historic Sundy House in Delray Beach. The historic inn is a popular place for Sunday brunch, dinners and, at this table, marriage proposals. (Photo: Bonnie Gross)

Getting there: Delray Beach is 50 miles north of Miami. Atlantic Avenue, the main street through downtown, is an exit on I-95. Head east for shopping and historic district, west for the attractions on Jog Road, such as the Morikami.

Where to stay in Delray Beach

There are many good options in Delray. Here are a few we’ve visited:

The Seagate Hotel and Spa immediately became THE place to stay and a symbol that Delray had become a hot destination when it opened on Atlantic Avenue a decade ago. The hotel has a Zen-like ambiance: clean, uncluttered, serene.  1000 E. Atlantic Ave., 877-577-3242;

Festivals and events in Delray Beach

One way Delray keeps people coming to its downtown is through a variety of popular festivals and events. The include a well-attended St. Patrick’s Day parade, a holiday tree-lighting event and a family-friendly News Year’s Eve First Night celebration.

Other major events during the year include Delray Affair celebrated 50 years in 2012 with more than 600 booths and nonstop entertainment stretched over 10 blocks of Atlantic Avenue. It’s a free street festival in April, and one of the most popular art fairs in the region. Details: www.delrayaffair.com

More things to do in Delray Beach

The Girls Strawberry U-Pick : This hydroponic farm is improbably found behind a storefront on busy Military Trail just north of Atlantic Avenue.  You can pick strawberries and buy various fruits and vegetables, but the gardens are a special delight for families because of the caged exotic birds and a farmyard area with goats and other animals.

Spady Cultural Heritage Museum:  If you get interested in Delray’s rich history, you will learn about the black settlers who were among the city’s earliest residents. The Spady museum is located in the former home of a prominent African American educator and community leader from 1922 to 1957 and tells the community’s story through photos, documents, handmade quilts and historic objects.

Links to help you find things to do in Delray Beach:

I agree! The Pineapple Grove area is exciting and vibrant with a energetic nightlife and some REALLY fantastic restaurants. Just watch out for the maskless lack of social distancing and the MAGA sore-loser parades that occur practically every weekend on East Atlantic Ave. It is especially annoying when one is trying to enjoy a peaceful lunch.

Thoroughly enjoyed article on Delray Beach. Lots of things to do and see. You neglected to mention actually playing the sport of Pickleball. Nationally thousands of people play. They teach Pickleball in our schools. Lots of videos on You Tube. Easy to learn and play. Try it. Thx for considering this sport in future visits to many other towns also. Harriet Kalin Pickleball Ambassador Palm Beach County 561-499-2020