Selby Gardens contains the most diverse collection of orchids and bromeliads in the world. Thousands of species are represented. 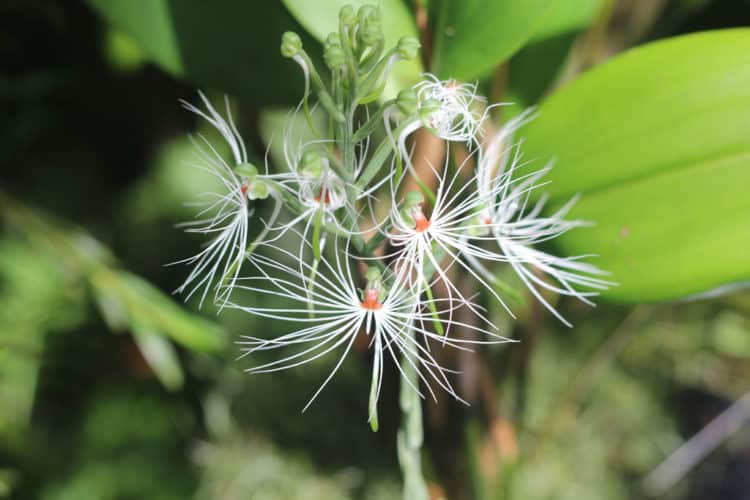 The Selby Garden is home to many unusual orchid plants.

Botanical gardens are particularly lush in Florida, but there’s even more reason to visit the Marie Selby Botanical Gardens in Sarasota.

It specializes in epiphytes, or “air plants” —  plants that grow upon trees and branches to take advantage of brighter light in the upper canopy of a forest.

These epiphytes include orchids, bromeliads and gesneriads, all of which produce spectacular flowers and, often, unusual colors and shapes of leaves as well.

The Selby Gardens contain the most diverse living and preserved collection of ephiphytes in the world, with thousands of species represented.

Orchids are the largest species of flowering plants in the world, with more than 27,000 varieties, and about 70 percent of them are epiphytes. 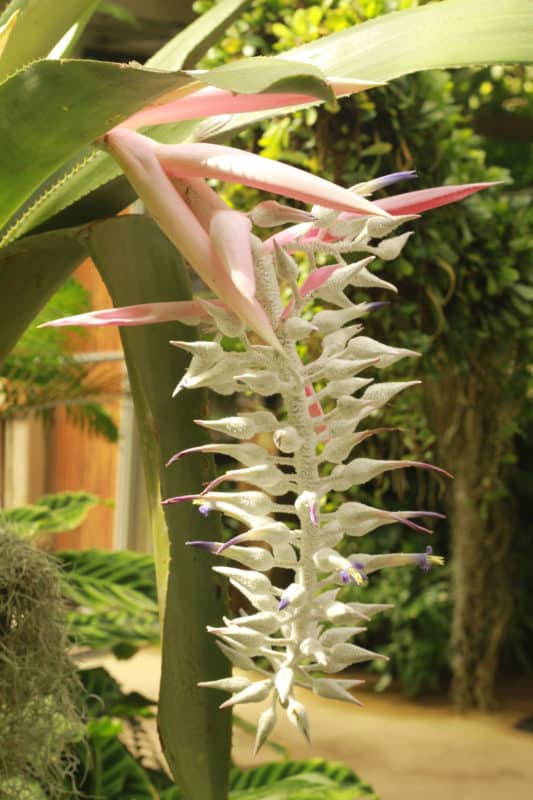 This showy bromeliad flower is sheathed in pink. The snowy bulb water for the plant and sprouts tiny purple flowers.

Selby Gardens celebrates the wonder of orchids every fall with a spectacular orchid show.

In December, the garden adds a special evening light show for the holidays that has become a Sarasota tradition.

In addition to the full menu at the cafe, Michael’s On East will provide grilled foods and a cash bar each evening during the holiday show.

Luckily for year-round visitors, even when the fall orchid show is over, the Selby Garden has orchids and other plants in bloom every month of the year.

While October and November are considered orchid season because of the number of orchids in bloom at that time, no matter when you visit, you will see a wide variety of shapes, sizes and colors of these “most beautiful and most wonderful” flowers, often including rare and unusual varieties not found anywhere else. 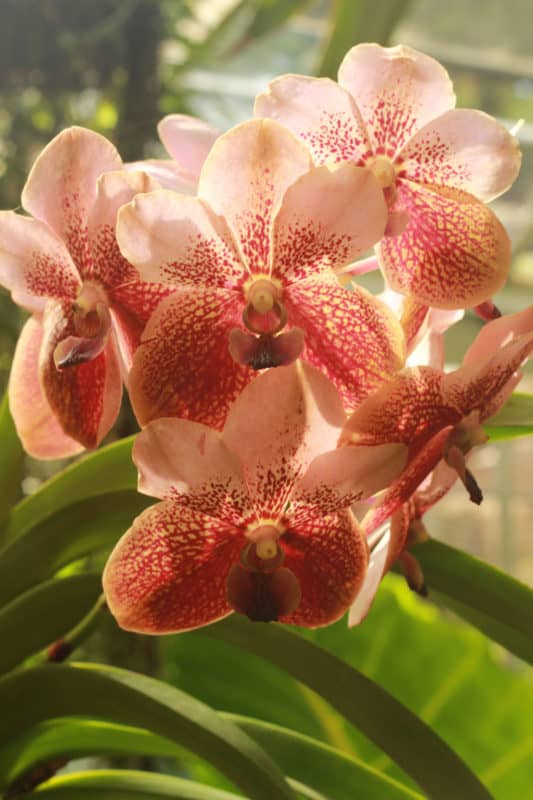 The Selby Garden boasts a wide variety of orchid colors and shapes, many of which are unusual.

The Selby Garden is kid-friendly with a children’s rainforest garden, colorful play structures and a banyan grove that includes treehouse-like structures for everyone to climb into for a view of Sarasota Bay and the sailboats bobbing on moorings at the city marina.

The outdoor gardens are at their best in the winter months when it’s comfortable to wander through mangroves and tropical plants. In addition to the orchid house, Selby Gardens also has display gardens for butterflies, bonsai, bromeliads, fragrance plants and edible garden plants.

Selby Gardens has a small café on the grounds and a shop where you can buy orchids, succulents and other plants to take home with you.  It is a 5-minute drive or 20-minute walk to the shops and restaurants of downtown Sarasota.

The orchid show at Selby Gardens takes place every October and November with a different theme each year. For details, visit https://selby.org/ 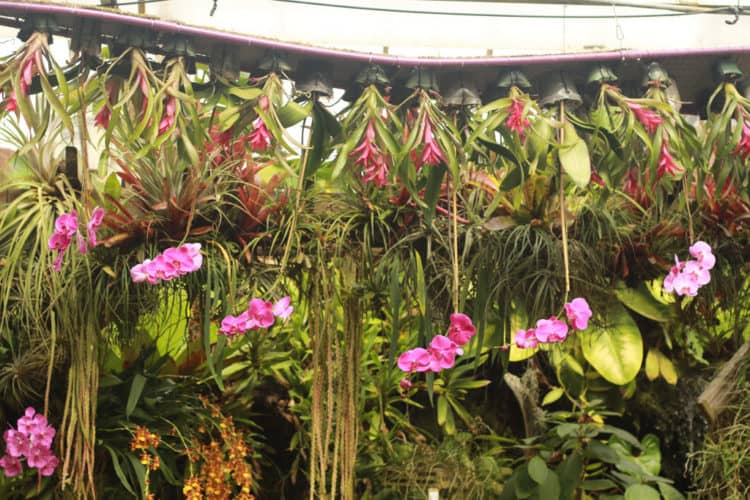 A “ribbon” of moss suspends bromeliads and Phalaenopsis from the top of the Selby Garden’s tropical conservatory in the “Endless Forms” exhibit.

The gardens are a legacy from early Sarasota pioneer Marie Selby, who founded the Sarasota Garden Club and donated her home and gardens to the community upon her death in 1971.

Marie and her husband, William Selby, moved to Sarasota in 1909 and bought the land on Sarasota Bay.

William Selby ran an oil company with his father that later merged with a Texas oil company to become Texaco.

In their first year of marriage in 1908, the Selby’s became fascinated with a cross-country automobile race from Seattle to New York. They decided to try it themselves, and Marie became the first woman to drive across the United States in a car.

She was an avid outdoors woman and gardener throughout her life.

The couple never had children and left their fortune to the Selby Foundation, which, in addition to operating the garden, provides scholarships, makes donations to non-profit agencies, and administers several other non-profit foundations in the Sarasota area. 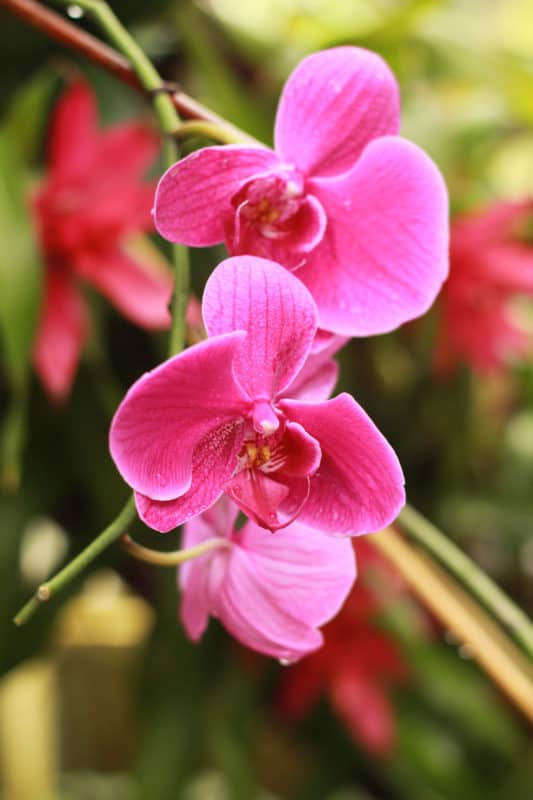 Phalaenopsis orchids are also known as “moth orchids” for their appearance of having wings. Cultivars and hybrids of these are the most common orchids sold today.

Vicki McCash Brennan is a veteran journalist, teacher and mentor to high school journalism advisers for the Journalism Education Association. Vicki spent 25 years in the trenches as a reporter and editor for newspapers and magazines. She holds a master’s degree in journalism from the University of Missouri-Columbia. The mother of two grown daughters, Vicki is semi-retired and enjoys bicycling, reading, museums and art galleries, sailing and travel with her husband, Jack.

Wonderful photos! Thanks for sharing