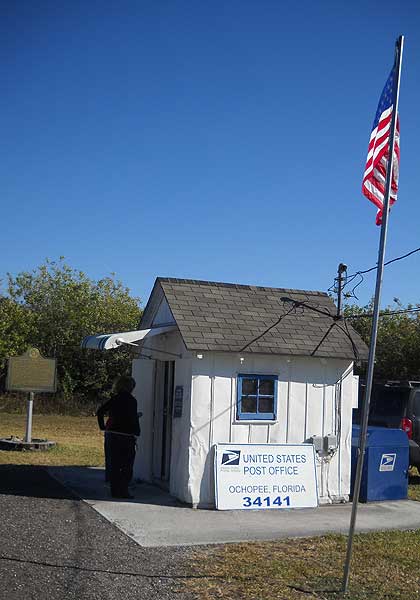 Situated along the Tamiami Trail (U.S. Highway 41) between Big Cypress National Preserve and the Gulf Coast section of Everglades National park, the Ochopee Post Office serves a community where there’s not a house in sight for miles.

The Ochopee Post Office is officially the smallest in the US. It’s in a building not much bigger than an outhouse and a single postal worker works every day, frequently selling postcards to tourists and answering questions from tour-bus riders.

In an era where hundreds of post offices have been closed to save money, this post office survives on more than cuteness. It does real work, handling the mail for more than 900 residents of the sparsely populated corner of Florida. (Everglades City is eight miles west.) 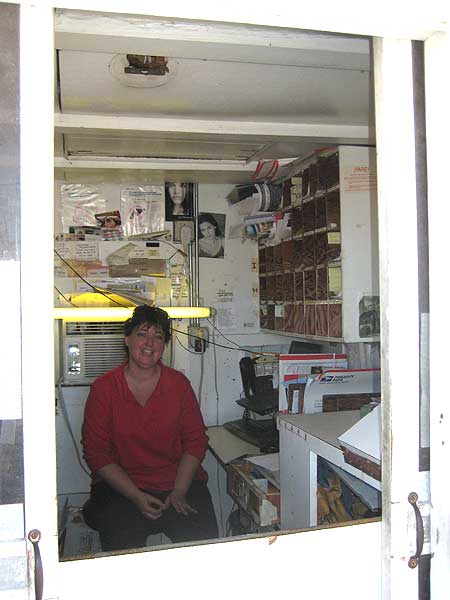 The post office hasn’t changed much in 50 years. In 1953, a fire destroyed the old post office/general store and a 7-foot-by-8-foot shed from a tomato farm was converted into the post office you see now.

Since then, the post office has withstood hurricanes.  Irma in 2017 was one of the strongest hurricanes ever recorded. It destroyed many structures in Everglades City, but the little post office reopened a few days after the storm after temporarily losing power.

A historical marker tells the story of the Ochopee Post Office.

The Ochopee Post Office is a five-minute stop on the Tamiami Trail, a very rewarding road across Florida.. Connecting Miami and Naples, it’s a two-lane highway that is far more scenic than Alligator Alley, which is 20 or 30 miles north.

“Downtown Ochopee” includes one other building — Joanie’s Blue Crab Cafe, 39395 Tamiami Trail. Joanie’s specializes in local foods, including frog legs, catfish, alligator, blue crab and grouper.The atmospheric  building, crammed with all sorts of memorabilia and oddities, dates to 1928, the year the Tamiami Trail was completed, and the spot attracts all sorts of folks, from bikers to European tourists. Here’s what TripAdvisor visitors says about it.

Your visit to Everglades City area

I worked in Everglade City and lived in a small camper on Chokoloskee Island in the early 80 s. I am so grateful and blessed to have done so. I waited tables at The Rod and Gun Club. My boyfriend and to be husband worked on a stone crab boat. What fun we had. Yes there was talk about the square grouper. Lol. Not around when town was busted. Only there for 4 months. What fun and will never forget