A well-planned community of architectural significance, but there’s a lot more to Venice

My location
Get Directions
VENICE, FL — Some well-kept secrets are upstaged by the old world charm of this Mediterranean-influenced city on the Gulf Coast, conceived as one of Florida’s first planned communities in the early 20th Century.

Initially conceived by wealthy Chicago businesswoman Bertha Honore Palmer as a resort destination, her heirs would abandon the ambitious project and sell the property to New York entrepreneur Dr. Fred Albee, who employed a prominent city planner to carry through with Palmer’s dream and design a “Winter White City of countless waterways.”

The plans were drawn, but the sheer magnitude of the project led to its collapse. In the mid-1920s, a prominent railroad union picked up the banner, riding a Florida building boom and seeing potential for a lucrative real estate investment for its pension fund.

The union retained original planner John Nolan, an advocate of comprehensive planning that included open spaces, separate business and residential zones, and respect for the environment. Nolan guided installation of modern infrastructure and construction got underway.

But Florida’s real-estate boom of the 1920s was coming to an end, undermined by the poor reputation of other development practices around the state, and the Venice dream was again derailed.

Still, Nolan’s model of a well-planned community would stick. His original plans, as well as the original infrastructure, continued to guide development of the city to this day.

This history unfolds as you explore the shady lanes and manicured boulevards, showcasing the Northern Italian design envisioned by its early planners, making Venice a unique and attractive architectural destination.

Your first instinct is to park the car and take a long walk. Do it, but don’t leave town because there is more to discover….

The Sands of Time

Venice’s fabulous beaches are curators of a history that goes back thousands of years, long before developers found this island paradise. These are the sands of time, and Venice bills itself as the “Shark Tooth Capital of the World.”

Ancient shark’s teeth are everywhere – in the surf or buried in sand — dating to a prehistoric era when 52-foot sharks prowled the waters of the Gulf of Mexico. Currents carry the fossils into the calm waters off Venice’s beaches, where they settle near the surf line.

On any given day, miners can be seen with rakes and shovels, sifting the sand for shark’s teeth. If you don’t come prepared for the hunt, no worries. Use your eyes! I’ve picked them up by the dozens at the surf line.

The most popular hunting ground is 177-acre Caspersen Park Beach on the south side of Venice.

After your day of beach combing, retire to Sharky’s on the Brohard Beach pier for a breezy libation and coconut shrimp.

Related article: The Beaches of Venice

There never were any Spaniards at Spanish Point, but archaeological evidence shows prehistoric people lived here, well fed on the bounty of the Gulf of Mexico, as long as 5,000 years ago.

Visitors can actually see that evidence.

Between 1959 and 1962, scientists excavated burial mounds and shell middens (ancient landfills). While shell middens exist throughout Florida, this is the only one cut in half and enclosed in glass for public viewing.

This “Window To The Past” is enclosed within a small museum where history is exposed in words and pictures, and still-buried remnants of prehistoric pottery and tools natives used in daily life.

Spanish Point was the winter estate of Chicago socialite Bertha Honore Palmer, whose dream of a prim and proper community led to the early planning of Venice.

On your return to Venice, wander out to the Casey Key Fish House and Tiki Bar (link triggers music) on Blackburn Point Road for casual waterfront dining overlooking the Intracoastal Waterway.

The Legacy Trail is one of Florida’s premier bicycle rail-trails, connecting downtown Venice to Sarasota via a paved 11-mile abandoned rail bed coursing through wilderness, pastures and residential neighborhoods.

Connecting to Venetian Waterway Park, the trail extends another 5 miles along the Intracoastal Waterway to Caspersen Park Beach.

My wife and I first explored these trails a few years ago while camping at Oscar Scherer State Park in Osprey, halfway between the Sarasota and Venice trailheads, making this campground a perfect jumping-on point to the trail.

A worthwhile side trip from the downtown Venice trailhead, is a casual ride through Venice’s bike-friendly boulevards and charming residential neighborhoods.

Pedal your way out to The Crow’s Nest on the South Jetty to enjoy a delightful seafood menu with a water view at Venice Inlet. Or weave your way back to centrally located Centennial Park for authentic French cuisine at Le Petit Bistrot.

This meandering river comes together west of Sarasota at Myakka River State Park, then twists and turns 34 miles south through pristine wilderness, skirting the western edge of Venice, eventually emptying into Charlotte Harbor.

State-designated as a “Wild and Scenic River,” the Myakka is a paddler’s paradise, offering a natural Florida experience for kayakers and canoeists. The river also accommodates small motorboats, though motor traffic is light and easy to ignore.

Launch your boat at Snook Haven, straight east at the unpaved end of Venice Avenue (beyond River Road), where you can rent kayaks or canoes at the concession or book a river tour aboard a pontoon boat.

Development along the river is forever minimal, and it flows slowly, allowing an easy upstream paddle to view turtles and alligators, often occupying the same downed logs. Birds of many species are in abundance.

At the end of the day, relax with a beer, smoked meats and gator bites on the outdoor deck of the rustic Snook Haven Restaurant. Daily entertainment from banjo pickin’ to country rock lends ambience to this outpost where “Revenge of the Killer Turtles” and classic “Tarzan” movies were filmed. 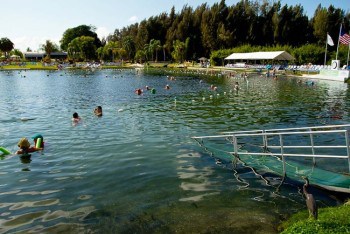 Slow-walking waders are almost cult-like in their rhythmic slog around this spring-fed pond, soaking in it’s mystical healing qualities.

In a state where the quest for the Fountain of Youth is non-stop, and ever in competition, this is the only warm-water spring in Florida, giving it a leg up on the wannabes.

Maintaining a constant 85 degrees at its surface, with a slight tinge of sulphur in the air, visitors by the hundreds flock here daily, wading and floating then sprawling in the sun on the crisp green lawn encircling the spring pool. Water flows through at the rate of 8 million gallons a day.

These healing waters are a big attraction for visitors from Eastern Europe, where the spring is reverently known as “Chudo Ozero,” or Miracle Lake. Many have settled permanently nearby.

Warm Mineral Springs is a fun, if a bit eery, place to visit.

The spring is a sinkhole caused by the collapse of a cavern 30,000 years ago. Wide and shallow near the surface, the spring drops like a cone into a cave 230 feet below. Archeologists have found 10,000-year-old human remains in the sediment, suggesting it may have been a burial place in ancient times.

When you’ve had enough of the springs therapeutic powers, hop over to neighboring Englewood and imbibe at the waterfront White Elephant Pub on Manasota Key.

If you go: Pick up a free “Tour Venice Architecture” guide at the Venice Chamber of Commerce at 597 Tamiami Trail South

A shorter version of this article appeared in the Travel sections of the Orlando Sentinel and the South Florida SunSentinel on Sunday, November 29.