I had been to Key West many times before I got to Fort Zachary Taylor Historic State Park.  Apparently, I am not alone. In reviews on Yelp, folks talk about it as “my little hidden secret.”

The reason Fort Zachary Taylor is not better known is probably its location: When in Key West, the only indication of the fort is a small street sign. Because it is on the water behind the Truman Annex, you don’t pass it while walking or driving. 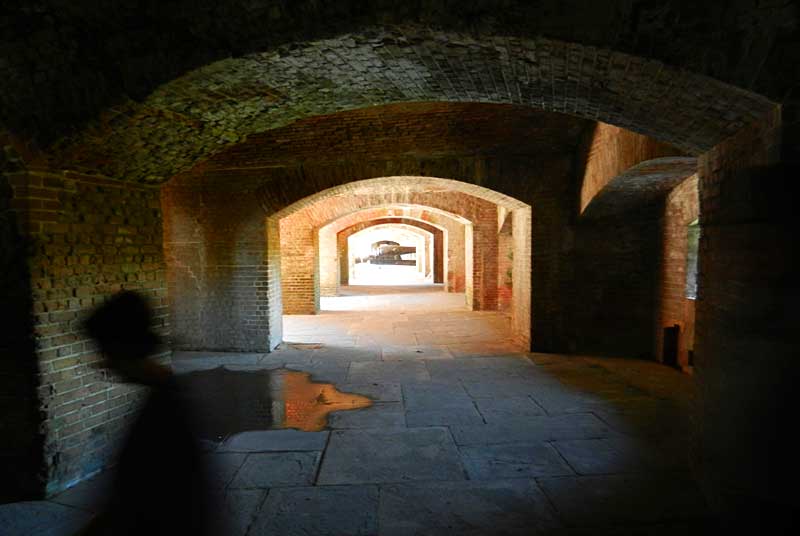 Fort Zachary Taylor Historic State Park: The bricks came all the way from New York. Craftsman who knew how to lay the bricks had to come from England and Ireland. (Photo: David Blasco)

Fort Zach, as locals call it, is only visited by people who seek it out. Here are five good reasons to do just that: 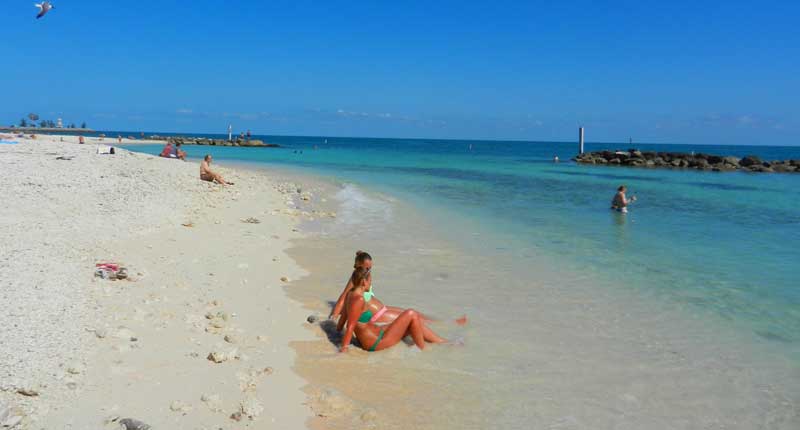 Lots of visitors to Key West complain they didn’t get the memo about its poor beaches. I’ll tell you straight up:  If it’s beaches you want, I have a lot better places to recommend visiting!

The beach at Fort Zachary Taylor is considered the best, however. It is quite rocky, so water shoes are somewhere between helpful and essential. The water, however, is clear Caribbean blue, a mix of the Gulf and Atlantic. Other beaches in Key West are shallow with water that tends to be stagnant and murky. 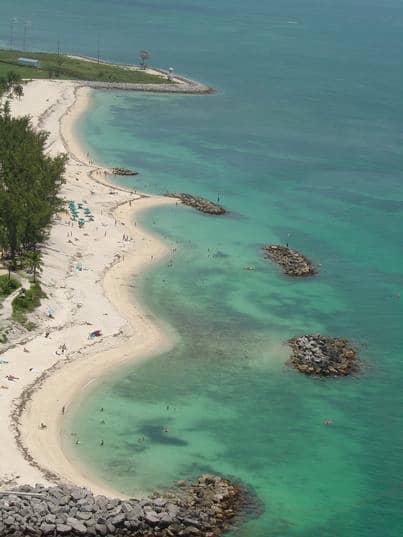 The beach from the air at Fort Zachary Taylor Historic State Park.

At Fort Zachary Taylor, the rocky bottom and rock formations off shore attract a number of tropical fish, so it makes a good spot for snorkeling from shore. (You do need to swim out into water too deep to stand in, so young snorkelers will benefit from life preservers.)

Along the sandy beach are picnic tables shaded by Australian pines. Though an exotic species, Keys residents begged to keep them, and visitors are thankful for the shade. 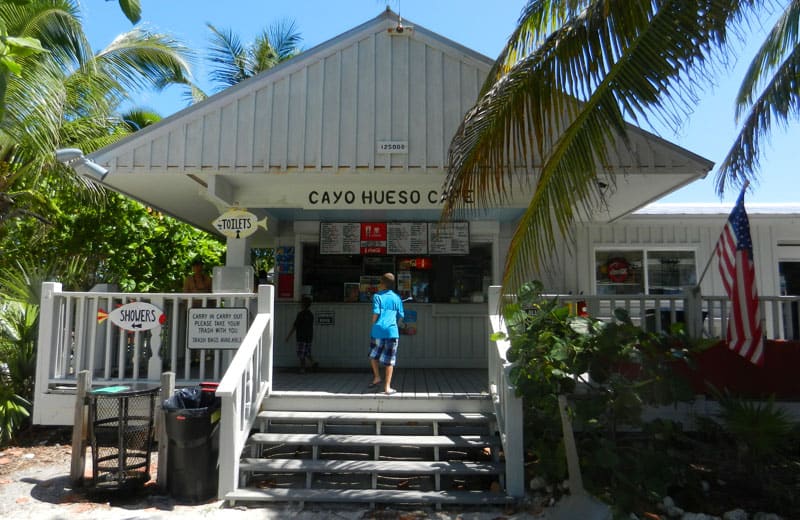 Near the beach is Cayo Hueso Café, which offers reasonably priced sandwiches, snacks and cold beverages served on a shaded patio overlooking the beach. (No sandwich costs more than $9; a hot dog or slice of pizza is $4 to $5.) (Menu as PDF.)

Given Key West prices, a day at Fort Zachary Taylor and lunch at Café Hueso is a cheap and wonderful day of fun. 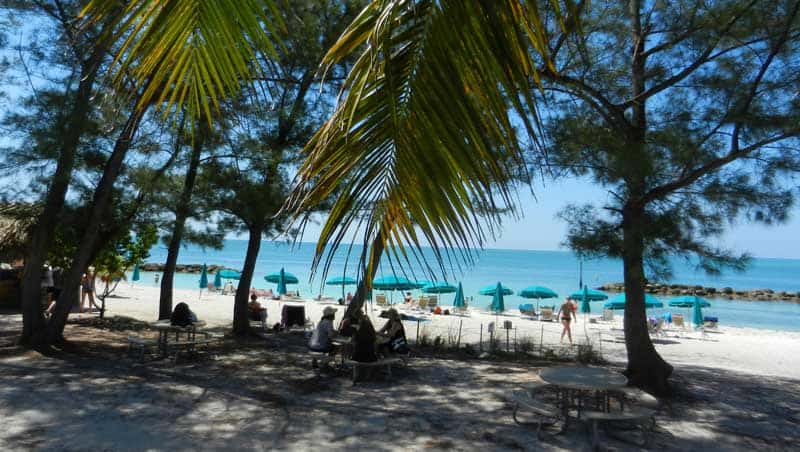 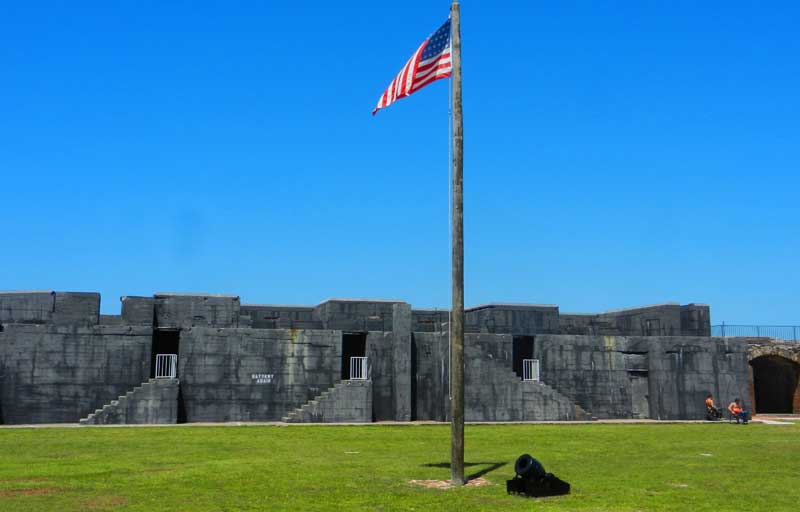 You can tour Fort Zach on your own with an informative free brochure or take a daily free guided tour at 11 a.m. I recommend the tour: Our guide, a knowledgeable ranger, told the history as a series of interesting stories. 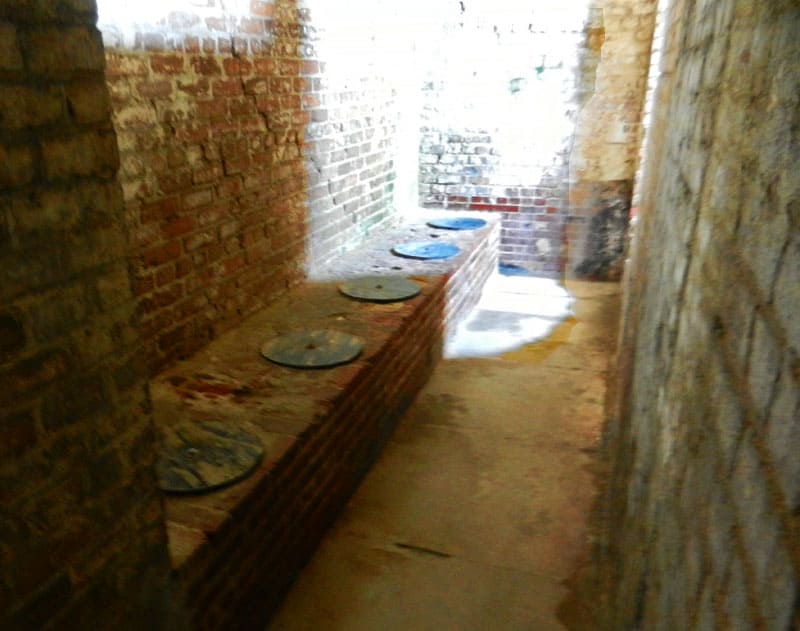 Visitors are fascinated by the row of latrines at Fort Zachary Taylor, which emptied into the ocean and were flushed by the tide. Because there is not a huge difference between high and low tide at Key West, this was not highly effective.

With hurricanes, disease and the need to ship in bricks and granite from New York, this fort took 21 years to build. Even though not complete during the Civil War, it was held by Union forces, a key tool in enforcing the blockade that prevented supplies from reaching Confederate ports. 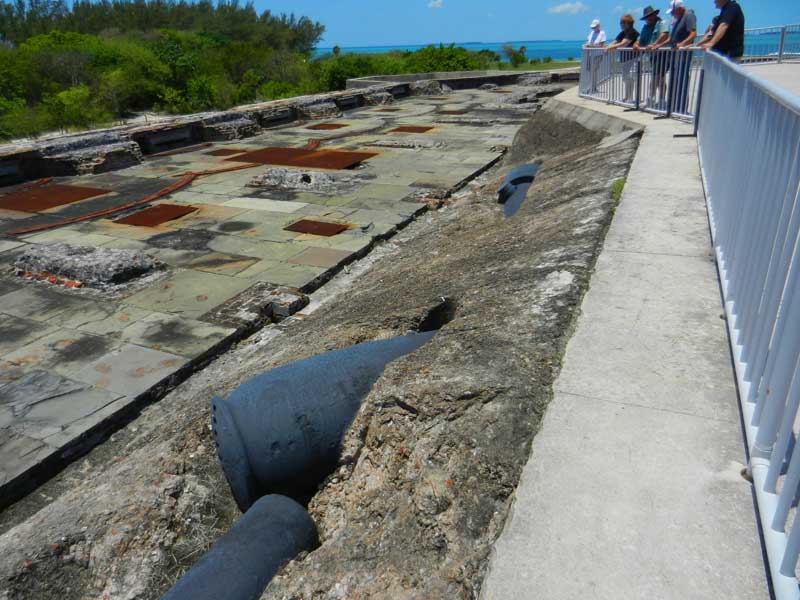 Many of the “missing” Civil War cannons at Fort Zachary Taylor were actually built into the walls for extra fortification during  the Spanish American War. (Photo: David Blasco)

While the fort had plenty of guns – 165 – they were never fired except for practice. The fort played an important role in World War I and II and again in the Cuban Missile Crisis in October 1962. Cannon balls stacked neatly at Fort Zachary Taylor: You won’t be bumping these over. They’re too heavy. (Photo: David Blasco)

After the late 1960s, Fort Zachary Taylor’s brilliant past had dimmed. The fort, once three stories high, was reduced to two during the Spanish American war.

Dredging of a ship channel resulted in earth being piled around the fort, which once was surrounded by water. What’s worse:  Most of its Civil War era cannons were missing.

But in 1968, Key West resident Howard England began excavations inside the fort and discovered that during modifications for the Spanish American war, dozens of historic cannons were buried in the fort’s walls to reinforce Battery Osceola.

Some were removed, acid-cleaned and displayed.

Others remain embedded in the walls: Now it’s a visible graveyard of Civil War cannons.

England’s work established Fort Zachary Taylor as the place with the most Civil War cannons in the country and the fort was on its way to becoming a state park. The park’s entry road is named after England. 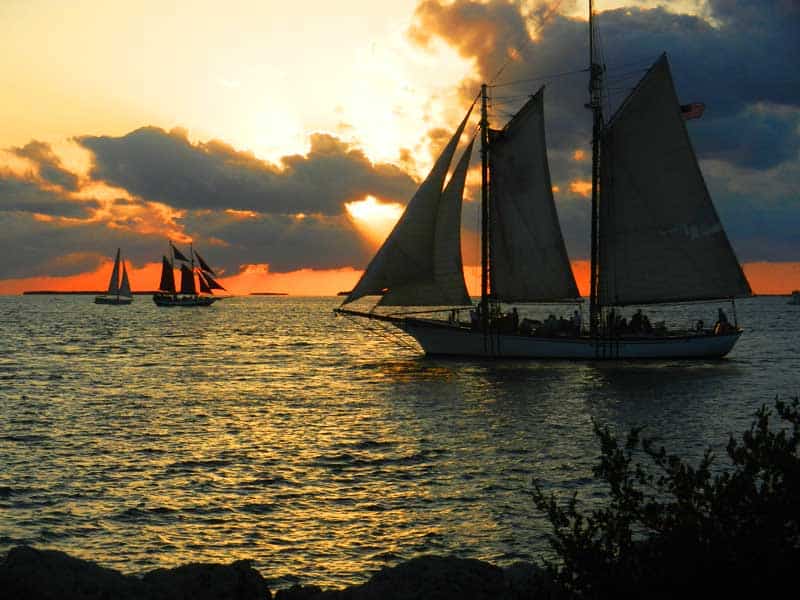 The park stays open through sunset every night, and visitors in the know keep their admission receipt and come back at dusk to watch the big golden ball drop into the water.

There are a few picnic tables with sunset views, but many folks sit on the rocks, surreptitiously sipping wine (alcohol is prohibited in state parks). The sunset boats cruise by with sails spread.

You couldn’t ask for a better view. As soon as the sun sets, a ranger will send you on your way and close the park.

On bikes, we pedaled just outside the park to the adjacent seawall at the Truman Waterfront at the foot of Southard Street and watched darkness fall. That, too, is an off-the-beaten-path spot to gaze at the ocean in Key West.

If you come by foot, be prepared for a long walk on the entrance road. Since parking is included, this is one place to visit by car in Key West. Biking in is also highly recommended. The park is open from 8 a.m. to sundown. The fort closes at 5 p.m.

Parking: Parking is ample and there is no cost beyond park admission.

Insider tips: You can rent masks, snorkel and fins here, along with umbrellas and beach chairs.

I will be traveling with my dog. Where will he be allowed to go with me. Example: Fort Taylor?

I had to do a little Internet research because state park policy says dogs are OK in day-use areas, but that isn't a complete answer. I did find this: "Domestic pets are allowed in day-use areas at the park, including the trails and picnic areas off the beach, but must be well-behaved (a standard determined by park staff) and on a leash of six feet or less at all times. You must pick up after your pet and dispose of the waste properly. Unfortunately, dogs are not allowed at the fort, at the cafe or in the water at the main beach." This is from https://wagwalking.com/lifestyle/beaches/fort-zachary-taylor-state-park

This will help my trips down there, thanks!

I really must agree that this is one of the prime attractions in Key West. I wonder if your tour was led by the same ranger who led our tour - he was not only knowledgeable, but engaging and passionate about every brick of the Fort. Some of his stories were quite moving. By far, the very best interpretive tour we've ever experienced. When the State Parks re-open, Fort Zachary Taylor will be one of the first we visit!