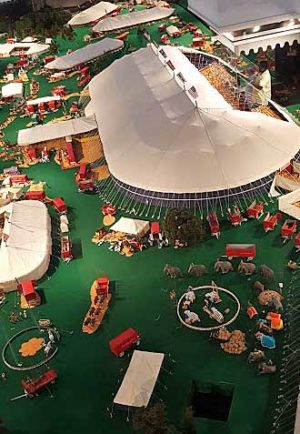 Sarasota has been associated with circus since 1912, when John Ringling, one of five brothers who owned the Ringling Bros. Circus, began buying land there.

From 1927 to 1959, Sarasota was the winter home of “The Greatest Show on Earth,” the Ringling Bros. and Barnum & Bailey combined circus.

Before Disney, the winter circus in Sarasota was Florida’s biggest attraction.

“The Greatest Show on Earth” passed into the past in May 2017, but the circus past and present is still part of Sarasota’s fabric.

Memories of the pageants, clowns, exotic animal acts, aerialists, trapeze artists and others who made the circus such a phenomenon are carefully preserved in the Ringling Circus Museum.

Sarasota’s Circus Arts Conservatory presents Sailor Circus and Circus Sarasota in a big top tent near the UTC Mall at University Parkway and I-75.

Many of the city’s long-time residents are former circus performers and workers.

The Ringling Circus Museum tracks the 250-year history of the modern circus from 1768 when Philip Astley, a British cavalry officer, began staging feats on horseback and other performances in a mixed program, to today, when smaller circuses are still touring with programs of clowns, acrobats, occasional animal acts and feats of skill.

“It’s still magic,” said Heidi Taylor, whose father was a circus performer and early curator of the Ringling Circus Museum, located in two buildings on the grounds of the John and Mabel Ringling Museum of Art. “I hope it always will be magic.”

Gleaming and glittering with gold and Wondrous Surprises for young and old.

The centerpiece of the Ringling Circus Museum is a 3,800-square-foot model of the circus from its Golden Age of 1919 to 1938, designed by Howard Tibbals.

The “Howard Bros. Circus” model is to scale – ¾ inch representing one foot — and thoroughly researched to depict the Big Top circus at a time when it traveled with 1,300 workers and 500 animals – and performed in a tent that held 13,000 to 15,000 audience members.

The model shows what life was like on circus day, including in the circus’ “backyard,” where all of the workers and animals were fed, repairs were made to wagons, tents and costumes, acts were practiced, and animals trained.

After seeing the model, visitors might be content to move on to the Ringling Museum’s many other attractions, including John and Mabel Ringling’s magnificent Venetian Gothic manor house on Sarasota Bay, Ca’ d’Zan, and the large, well-respected art museum, but there’s plenty more circus history to see after the circus model .

Upstairs in the Tibbals Learning Center is a traditional museum exhibit tracing the history of the circus and featuring costumes and other historical artifacts, as well as a highly detailed ½-inch scale model of the largest circus parade anyone could imagine. This one was imagined by Tibbal’s mentor, Howard Dunn, who based the parade units, wagons, animals, and costumes on historic elements, but embellished them.

At the entrance of the TIbbals Learning Center is a 42-foot by 22-foot mural of The Greatest Show that was created for the headquarters of Feld Entertainment, which owned the circus for 50 years, from 1967 until it closed in 2017.

Also in the Tibbals is a hands-on space where you can try walking a tightrope, squeeze into a clown car, and see more costumes, artifacts and props used in circus acts.

Feel the magic up close!

The Circus Museum in the original 1940s-era building next door to the Tibbals Center is home to original circus wagons and a fully restored Pullman train car, The Wisconsin, in which John and Mabel Ringling traveled across the country searching for art for their home and museum as well as acts for the circus.

Another must-see in the Circus Museum is a film narrated by Hal Holbrook about the Ringlings, the history of the circus, and the construction of Ca’ d’Zan and the art museum, which Ringling built in 1928 and willed to the state of Florida upon his death.

Circus Museum volunteers work as wood carvers helping to restore wagons and other circus ornaments, as well as hand-painting new items created by Howard Tibbals for the model.

“New things are added to the model all the time,” said Jennifer Lemmer Posey, Ringling Curator of Circus.

A portion of the museum is under-utilized, but long-term plans include improving the exhibits with more information about the various wagons, train cars and equipment on display.

“We steward the history of the circus,” Posey said. Other organizations, such as Sarasota’s Circus Arts Conservatory, “are the living legacy.”

The Ringling: Admission to the museum includes the Circus Museum, the first-floor of Ca’ d’Zan and the expansive John and Mabel Ringling Museum of Art, as well as a free tram tour of the grounds and gardens. A new glass art gallery and the Historic Asolo Theater, a renovated 18th-century Italian private theater, are free.  The campus is also home to the Asolo Repertory Theater, which stages a diverse season of plays and musicals. https://www.ringling.org/admissions-and-tours

Circus Arts Conservatory: Live circus shows are staged under the Big Top in Sarasota during the winter season. The CAC also provides circus training, camps and classes as well as community outreach. https://circusarts.org/

Find a room in Sarasota

Vicki McCash Brennan is a veteran journalist, teacher and mentor to high school journalism advisers for the Journalism Education Association. Vicki spent 25 years in the trenches as a reporter and editor for newspapers and magazines. She holds a master’s degree in journalism from the University of Missouri-Columbia. The mother of two grown daughters, Vicki is semi-retired and enjoys bicycling, reading, museums and art galleries, sailing and travel with her husband, Jack.