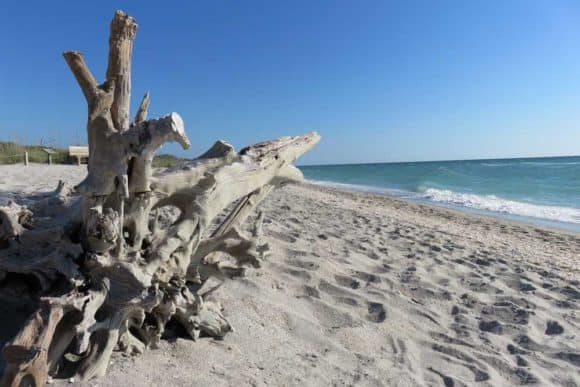 The many sun-bleached dead trees give the Stump Pass Beach State Park its name. It’s located on one of the Florida barrier islands between Sanibel and Tampa Bay. (Photo by Bonnie Gross)

Everybody knows about Sanibel and Captiva, the beautiful shell-laden Florida barrier islands on the southwest Florida coast.

But there’s a string of Florida barrier islands that extends north from Sanibel, and these are much less well-known. 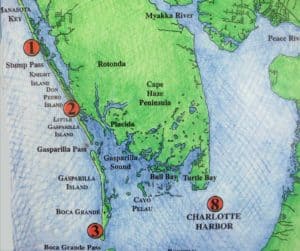 North of Charlotte Harbor, the barrier islands are further from the interstate, the adjoining cities are smaller and the hotels and facilities for tourists are sparser.

Within these barrier islands – Gasparilla Island, Don Pedro Island and Manasota Key – there are three spectacular state parks, including Stump Pass Beach State Park. All feature beaches that are among the best Florida has to offer but off the usual tourist path.

We found this Florida barrier islands well worth exploring, with good opportunities for kayaking, hiking plus shelling and beach-combing. Hotels, however, are limited, so you may look for AirBnB or VRBO listings or visit this area on a day trip from an adjoining city, like Punta Gorda or Venice.

We stayed in Englewood right on the beach at Weston’s WannaB Inn and found it a great base, but there aren’t a lot of other hotels in the area, especially on the beach. 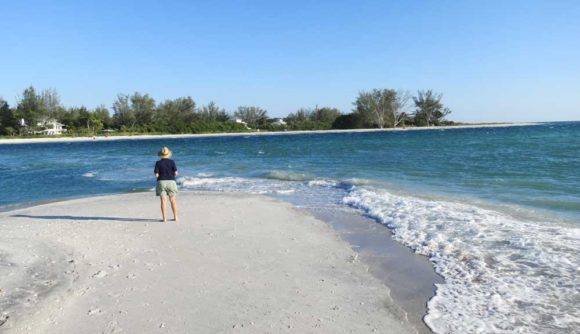 Stump Pass Beach State Park extends to the end of the barrier island to the inlet, where broad sandbars attract birds and offer beautiful views in all directions. (Photo: David Blasco) 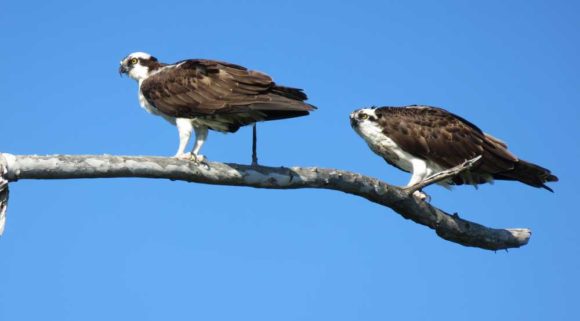 A pair of ospreys at Stump Pass Beach State Park in Englewood, located on one of the beautiful Florida barrier islands. (Photo: Bonnie Gross)

You’ll never have a crowd at Stump Pass Beach State Park – the parking lot only has 30 to 40 spaces. (That means on busy weekends, you might not find a space or will have to wait for one.)

The park is at the end of the road in Englewood on Manasota Key.  It’s a spit of land that extends 1.3 miles with many spots you can stake out to create a near-private beach experience.

In addition to white-sand beach on the Gulf side, there are the small sandy spots on the Intracoastal side of the island where you can sit, picnic, swim or fish in solitude. 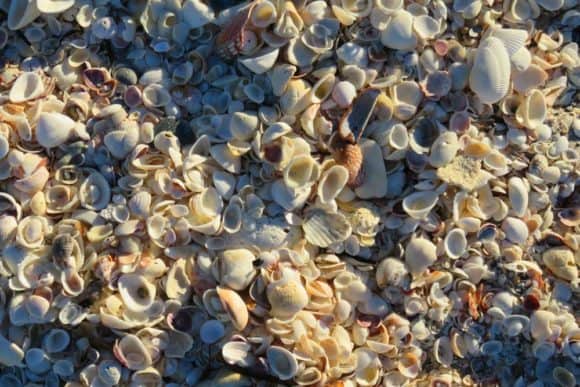 A sandy path runs up the middle of the barrier island, providing welcome shade on hot days. On the day we walked, there were puddles left from the previous tide so we waded and walked. With a combo of beach walking and the sandy trail, we got a work out hiking to the end. But it’s so worth doing.

The path ends at Stump Pass, where broad sandbars attract birds and offer beautiful views in all directions.

The many sun-bleached dead trees give the park its name and make the beach a photographer’s dream. We were lucky enough to see a pod of dolphins swimming in the pass while osprey and pelicans hunted overhead.

Stump Pass Beach feels completely unspoiled and natural. Though civilization is close, you feel like you are in a very wild place. 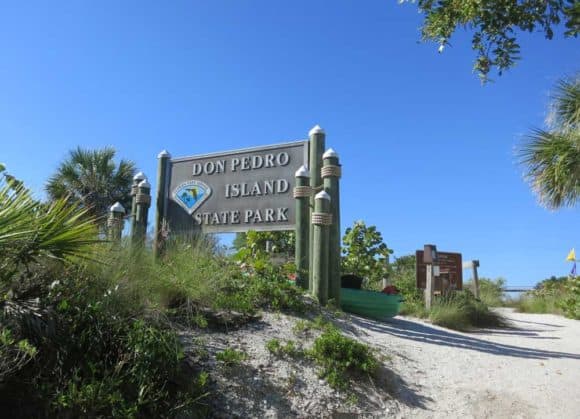 On the Florida barrier island south of Stump Pass State Park, there is a little-visited state park reachable only by boat, Don Pedro Island State Park.

While it sounds wild and remote, Don Pedro is sandwiched between two vacation communities on the island (Little Gasparilla Island and Palm Island), so you are never too far from big beach houses in the distances. Oddly, while accessible by car, nearby Stump Pass State Park seemed more isolated.

That’s not to say Don Pedro State Park isn’t worth visiting. Getting there is a fun kayak trip and I found shelling at the one-mile-long beach even better than at Stump Pass Beach State Park. Also, with all visitors arriving by boat, you’ll never see more than a handful of people on this barrier island. 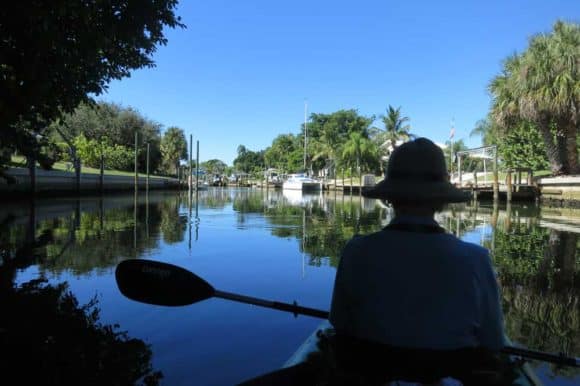 To kayak to Don Pedro Island, you put in across the Intracoastal at the mainland portion of Don Pedro State Park. If you bring your own kayak, you must drive down a block-long alne to drop off your kayak and then return your car to the parking lot.

We rented kayaks from HookedOnSups, which delivers and picks up kayaks to the dock here.

When you put in your kayak next to the dock, you see a shaded opening in the mangroves across the Intracoastal. To reach it, it’s an easy paddle with minimal power-boat traffic.

This is the entrance to a beautiful mangrove tunnel with shallow, clear water, and dappled light filtering through the leaves.

The mangrove tunnel leads to a peaceful lagoon inside Don Pedro Island State Park. It is a pristine place, unreachable by anything but paddle craft, where the only sounds are ospreys squealing overhead, mullet splashing and the sound of waves from the beach, not visible but not far. The mangrove tunnel is the only way into and out of the lagoon. On your exit, if you turn right and paddle a half mile, you go under a small bridge and into a bay (We loved that it’s called Rambler Hole!) where you’ll see the dock for Don Pedro Island State Park.

There’s an impressive new dock facility for power boats and a sandy put-in spot for kayaks, hidden behind the dock structure.  From the dock, a trail can take you directly to the beach and picnic shelter, or you can take a left to follow the path a distance through the desert-like scrub, over the dunes and out to the magnificent beach at the park’s southern end.

The star of this park is this gorgeous beach, hard-packed white sand full of seashells. (I ended up with more lovely shells — Florida fighting conchs and lightning whelks — than I could easily carry.)

A picnic pavilion overlooking the beach is large enough to accommodate all the visitors the remote park is likely to get in a day. It provides welcome shade and picnic tables and has modern restrooms and water nearby.

After leaving the park, we continued south and paddled around mangrove islands. At this point, if you cross the Intracoastal, you can paddle back to the Don Pedro parking area using the Cape Haze Canal, which is lined with homes.  On a windy day, this provided a quieter route than paddling the Intracoastal, which also has power boat traffic. 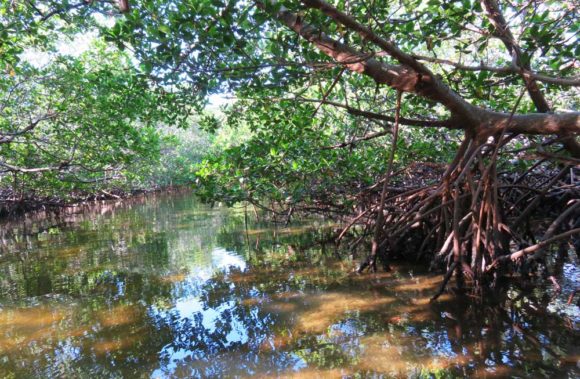 On the Florida barrier island that is home to the historic resort town of Boca Grande, this big state park offers miles of beaches and a historic lighthouse you can tour.  The park stretches along Gasparilla Island’s southern end, with four parking lots that provide access to the beach. The area served by the first and last lot also have picnic tables and shelters.

At the southern tip of the island is the oldest building on the island, the 1890 Boca Grande Lighthouse, home to a small well-rated museum full of local history, old photos and artifacts. The beach wraps around the lighthouse, offering outstanding views in every direction. The lighthouse itself doesn’t fit one’s expectations—it’s not tall and statuesque. For that, stop at what is called the North Range Light, a lighthouse located at the park’s first parking lot, which is not open for touring.

Here’s a Florida Rambler story about visiting Boca Grande and Gasparilla State Park, which is worth a day in itself.

Across the Boca Grande inlet from the lighthouse is Cayo Costa State Park. Cayo Costa is my all-time favorite Florida barrier island. It’s a little hard to reach; it requires a lengthier and pricier boat ride than any of the other islands, but it is bigger, wilder and more beautiful than any of the others. Here’s a Florida Rambler story on visiting Cayo Costa. 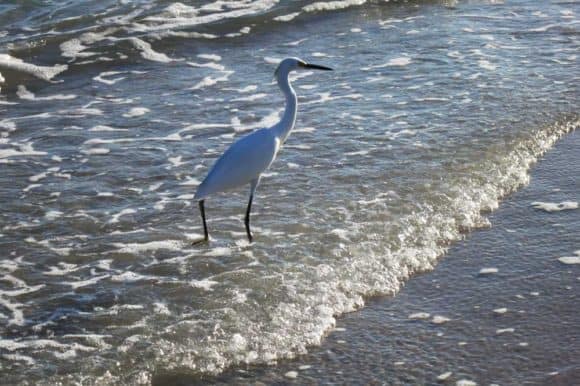 Planning your trip to the Southwest Florida barrier islands

Stump Pass Beach State Park
South end of Manasota Key
900 Gulf Blvd.
Englewood
(941) 964-0375
Be sure to bring dollar bills, as you’ll be asked for $3 admission at the honor box. There are restrooms and a picnic table at the entrance.

Don Pedro Island State Park
8450 Placida Road
Cape Haze
(941) 964-0375
Be sure to bring dollar bills, as you’ll be asked for $3 admission at the honor box. There are restrooms and a picnic table at this entrance. 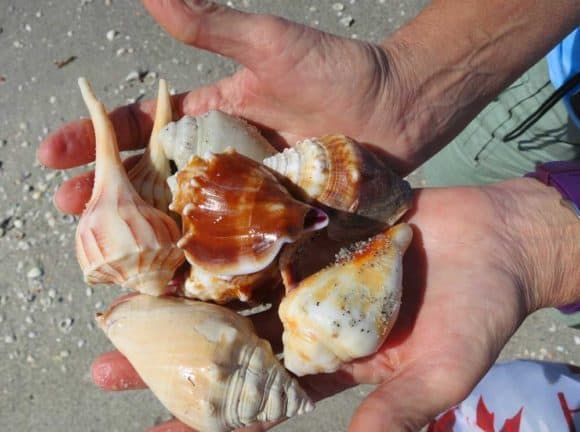 One of the joys of Florida barrier islands: I ended up with more lovely shells — Florida fighting conchs and lightning whelks — than I could easily carry at Don Pedro Island State Park, Cape Haze. (Photo: Bonnie Gross)

Where to stay and eat in Southwest Florida barrier islands

These barrier islands attract visitors, but the accommodations are generally in condos and vacation rental homes instead of hotels. Many visitors come back for the season year after year, with Canadians and British well represented.

We stayed at the Weston’s WannaB in Englewood, which is a complex of buildings, some one-story cottage-like structures, others three-story buildings with efficiencies with full kitchens. Most have Gulf views — and the view is spectacular.

Also recommended to us in Englewood were Conch Out Vacations and Gem Coast Inn.

The most “Florida Rambler” like place to eat in the area is the White Elephant Pub, where we enjoyed sandwiches and live music outdoors on the Intracoastal across from the beach in Englewood. The White Elephant has tons of history, though it is not touted much at the restaurant and it is difficult to determine what part of the building is historic. It was originally associated with a circus that wintered here and has a colorful history as a bar and casino during the 1920s. It burned down three times, according to the manager.  Today, it’s lively, family friendly and popular, with large portions of good food. 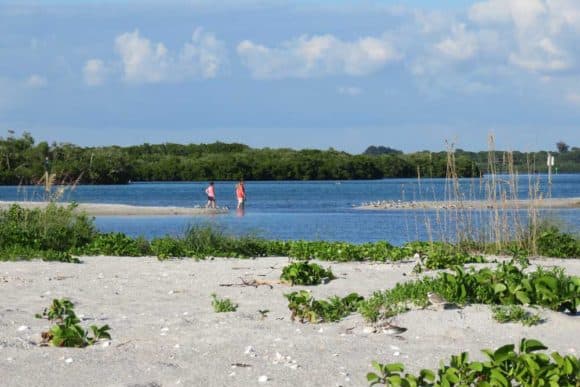 Sandbars at the inlet at the end of Stump Pass Beach State Park. (Photo: Bonnie Gross) 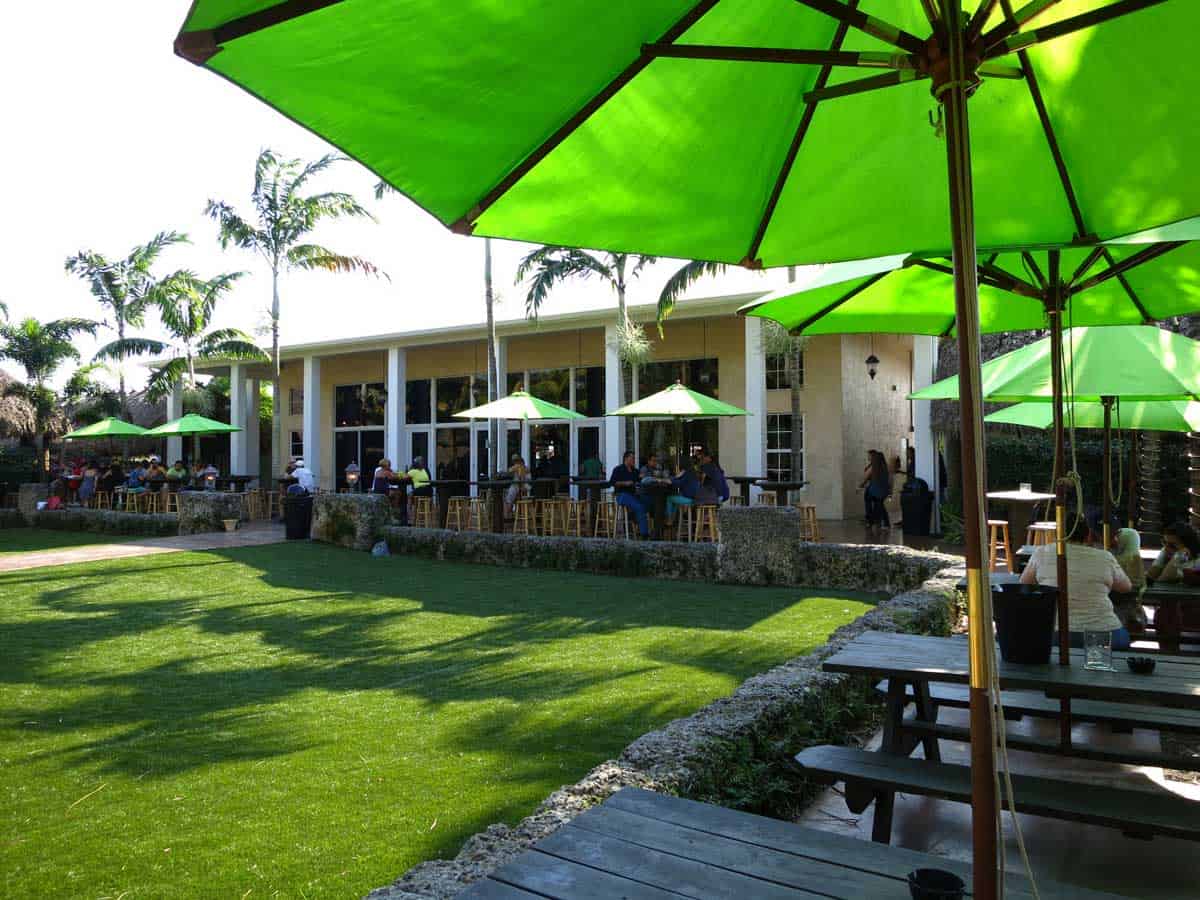 Previous
A day exploring the Redland: Agriculture and rustic charm thrive near Miami Are umbrellas and tent/canopies allowed on the state park beaches? Are there any limitations?

Yes. Umbrellas and pop-up canopies are allowed at most state parks.

Are any of those islands accessible by car, or allow cars on them?

You can drive to Stump Pass and Boca Grande but not to Don Pedro Island (Cape Haze).

Kayak wheels are not needed to launch at Don Pedro. You can drive down the narrow lane to the water and drop off your kayak. Drive back to parking lot and walk back to launch.

Thanks, Dale! We rented a kayak at the spot and didn't have the experience of getting the kayak to the water.